Weekly qualifying to The BIG One has taken place for much of the year. So far, 21 of the 50 allotted spots to the September 19-20 tournament — which will now take place online here rather than onsite at Laurel — have been won. That leaves 29 spots to fill and three months to fill them. So we’re doubling up.

Starting this weekend, we will offer a guaranteed qualifier on Saturday and another on Sunday. One will be a live-format tourney each week and the other a Pick & Pray. 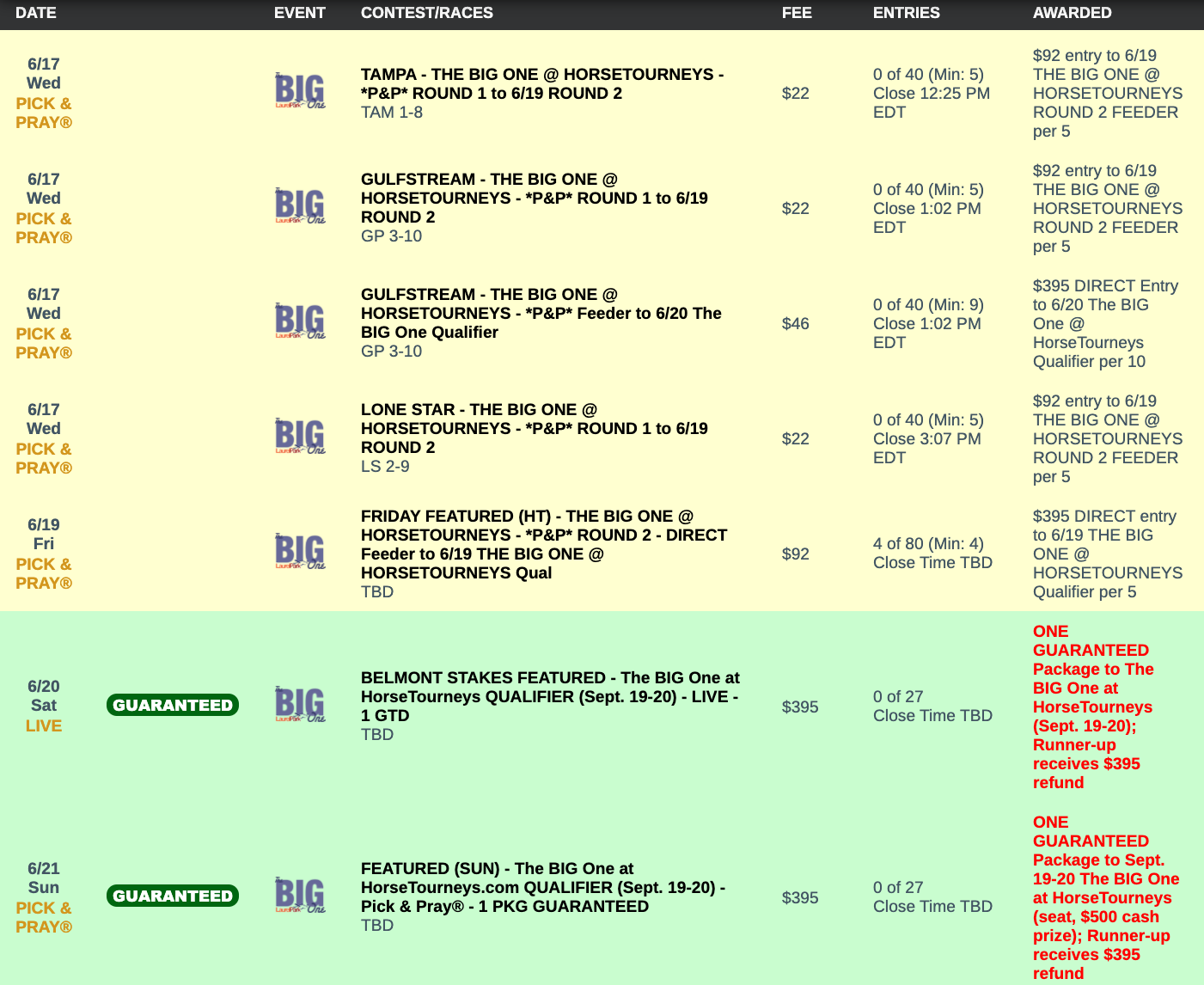 For those unfamiliar with The BIG One, we like to refer to it as the “High Expectation tournament” because the final field will number no more than 57 (including up to seven buy-in entries) and, despite that small field, the prize pool contains 10 seats to top brick-and-mortar tournaments, plus another five entries to the Horse Player World Series (or $1,500 in cash if you prefer), plus a guaranteed prize pool which is up to $87,239 and growing.

Finish in the top 10 at The BIG One in September and you will share in the $87,000+ cash pool and also earn your choice of a seat to the NHC, an entry to the Breeders’ Cup Betting Challenge or a paid-up berth to the Pegasus World Cup Betting Championship. (The only “rule” is that at least two of the 10 choices have to be NHC seats so that The BIG One qualifies as an NHC Tour points-scoring event.)

Entry fees for the weekend qualifiers remain at $395 each. One grand prize of an entry to The BIG One — and an immediate $500 credit to your HorseTourneys account (in lieu of what would have been a $500 travel credit to Laurel) — is guaranteed. The runner up in each qualifier receives a $395 entry refund.

Players may purchase up to two entries each in any qualifier. Do note, though, that there is a limit of one entry per player in The BIG One in September. Entries to The BIG One are fully transferable, however. So if you win a second one, you can transfer it to any account holder of your choosing.

The BIG One will be contested in September using a $2 win/place, All Optional Live scoring format. Players will make 12 plays each day from among 30 eligible contest races. Traditional 20-1/10-1 win/place payout caps will be in effect.

For more information about The BIG One, including weekly updates on purse status and who has qualified, visit the contest page of any The BIG One qualifier.