On May 22, Dylan Donnelly won our $21,000 cash game by selecting seven winners out of 10 races. Little did we know, he was just getting warmed up.

The leaderboard of Sunday’s first qualifier to the Xpressbet Belmont Stakes Challenge really doesn’t do Donnelly justice. Yes, he picked up a $3,000 entry for his $52.00+ victory (as did the 2nd- and 3rd-place finishers Mark Feld and Charles Jones, who were the only others to top $70.00). However, the scoreboard, alone, doesn’t convey Donnelly’s Sunday mastery.

Ten wins and a place! On May 22, Donnelly recorded his 7-win day by nailing the last six. Here, he fired off seven winners right out of the chute, including 4-1 and 5-1 shots. With the power of hindsight, one can see that he effectively had things sewn up after just six races ($73.30). Donnelly’s performance raises two questions: 1) What can he possibly do for an encore? and 2) What the heck was he thinking in that 9th at Golden Gate? Embarrassing selection!

Actually, Donnelly did have an encore—or two or three—on Sunday. 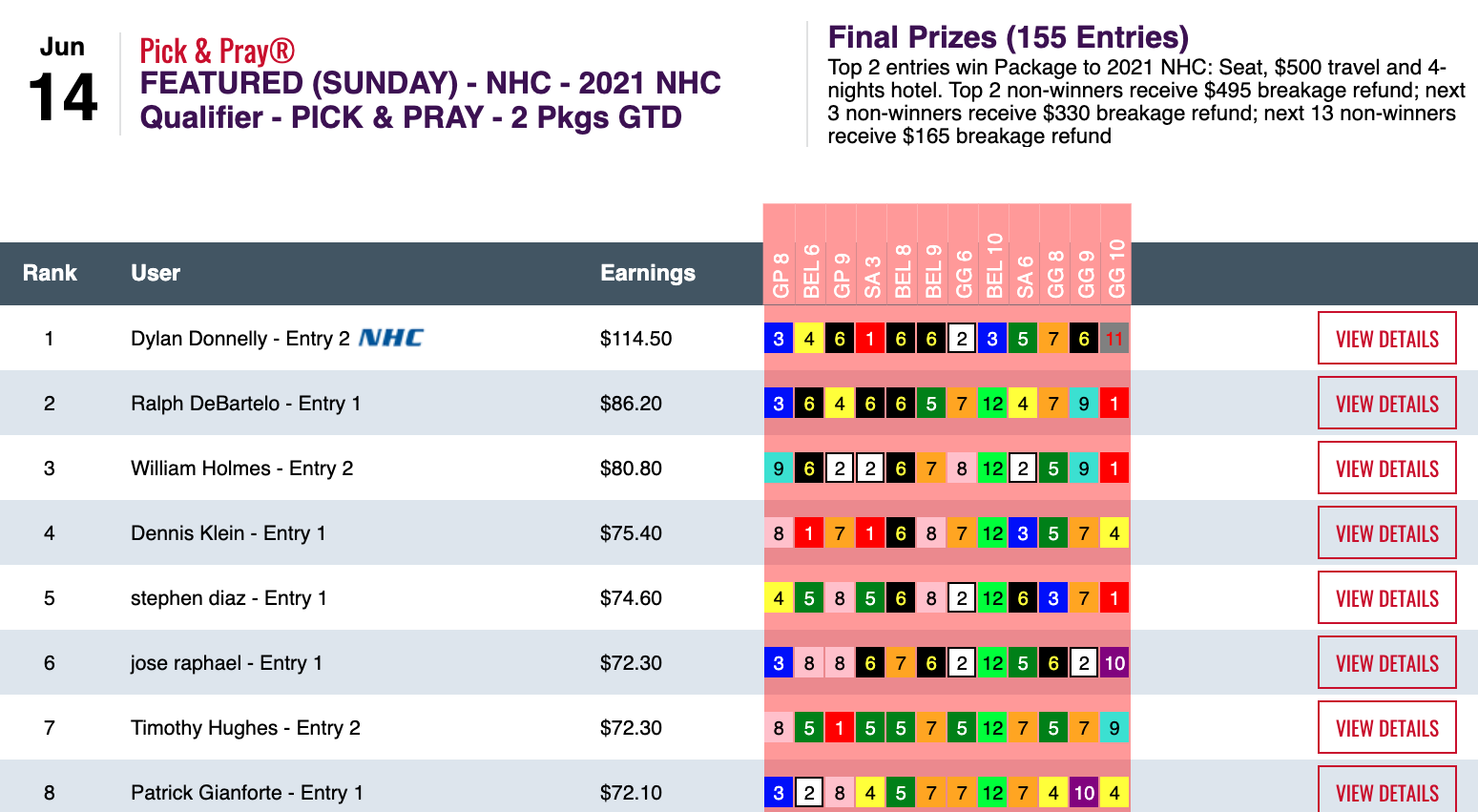 Donnelly played the same picks back that won him the Xpressbet Pick & Pray to finish first in Sunday’s NHC Pick & Pray at HorsePlayers. Perhaps not surprisingly, Donnelly was already double-qualified to the Big Dance, so he was just playing for NHC Tour Points…and those points should look especially nice when the standings board is updated at NTRA.com since he was in second-place, trailing Sally Goodall by just 534 points, when the weekend began.

Since Donnelly wasn’t eligible for the top prize, the two available NHC spots went to the two players who managed to reach the $80.00 plateau—Ralph DeBartelo and William Holmes.

Obviously Donnelly’s first thoughts were his best thoughts on Sunday. It’s hard to do better than 10 firsts and one second out of 12 races. When Donnelly took a crack at a couple of live-format tourneys, he got himself off of a few winners and his score dropped—not that it prevented him from winning those too, however!

Hopefully, Donnelly won’t feel too much shame when his friends see that he won the Sunday qualifier to The BIG One (and also came in second on his other entry) with a mere 6 winners and 2 runners up. 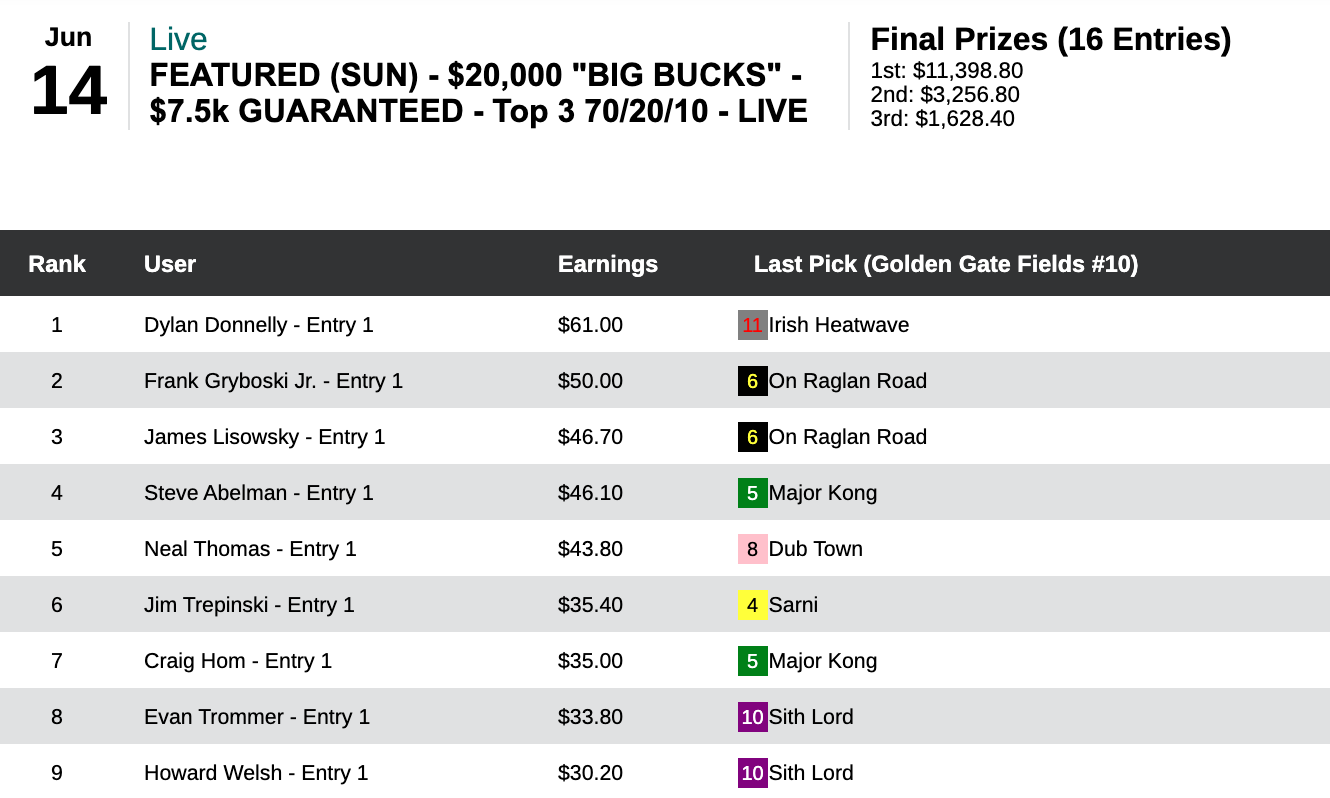 Donnelly actually had to sweat this one out a bit. He was ahead by just 20 cents going into the last race. So while Irish Heatwave’s victory ($6.80, $4.00) didn’t make much of a difference in his other contests, it meant a lot to him in this $16,284 game.

Believe it or not, this wasn’t even the 29-year-old Californian’s best day of the year—or even of the spring—in terms of winnings. On March 28, he won an NHC seat, a Spa & Surf Showdown entry plus $20,500 in our Florida Derby cash game. Early next year, however, when the 2020 NHC Tour standings are compiled for the final time, Donnelly may just look back on last Sunday as the day that was truly his “year-maker.”

Perhaps Vic Vickers will look back on last Wednesday as HIS year-maker.

Paul Cush had Snap Hook and 7-1 winner Dave’s Baby Girl before that in the 4th at Lone Star.

It’s always nice to see a past NHC champ get qualified to the next renewal because it increases the chances that we could see the event’s first two-time winner. However, the results of last Friday’s $75 NHC qualifier were extra special.

That’s the First Lady of the NHC leading the way—Judy Wagner.

Runner up Joe Tambasco also earned an NHC seat. He had 4 winners and one place collection—with 19-1 Bail Out ($13.40) in the 10th and final from Belmont—to earn his Bally’s Berth.

Time for some quick HorseTourneys trivia.

Who was the first player to win a six-figure cash tournament here?

Before there was a Spa & Surf Showdown…before there was a Flo-Cal Faceoff…there was a $100,000 guaranteed tourney on Travers Day 2017. It was our first-ever six-figure cash game—and it was won by Boca Raton, Fla., resident Victor Mendes Sr.

Mendes was back in the HorseTourneys winner’s circle on Friday. The payoff wasn’t $40,000 like it was for him nearly three years ago—but maybe, in time, it could be.

The Floridian will now hope that he has more of that August magic in reserve for the $150,000 Guaranteed Showdown, which will require players to make full-card selections for two days of racing at Saratoga and Del Mar. On Travers Day 2017, Mendes did well at Saratoga but whiffed on three races from Del Mar. Count on Mendes to be working on the “Surf” side of his game between now and August 15!

If he so chooses, Michael Warren (4 wins, 3 places) can certainly afford to buy his way into the Spa & Surf Showdown after capturing Friday’s $10,000 Pick & Pray, which finished up with a total purse of $17,788.

Bail Out bailed him out with that $13.40 place payoff in the last race to allow Warren to move into first and claim the $8,004 grand prize (enough for four Showdown entries plus a small gratuity for the blog writer).

Unlike the rest of the Friday winners, Joe Hyerczyk did the vast majority of his heavy lifting early on.

All but $2.80 of Hyerczyk’s scoring came during the first four tourney races (including the Laurel Race 7 capper). His pair of wins and pair of places added up to a $29.60 victory in Friday Breeders’ Cup Betting Challenge Low Ratio qualifier.

The high score on Saturday (by just a little bit) belonged to Anthony Laurino in the day’s Spa & Surf Showdown qualifier.

It seemed a bit like Viva Italia Day at HorseTourneys on Saturday as Laurino’s victory was just one of several recorded by Paisanos. 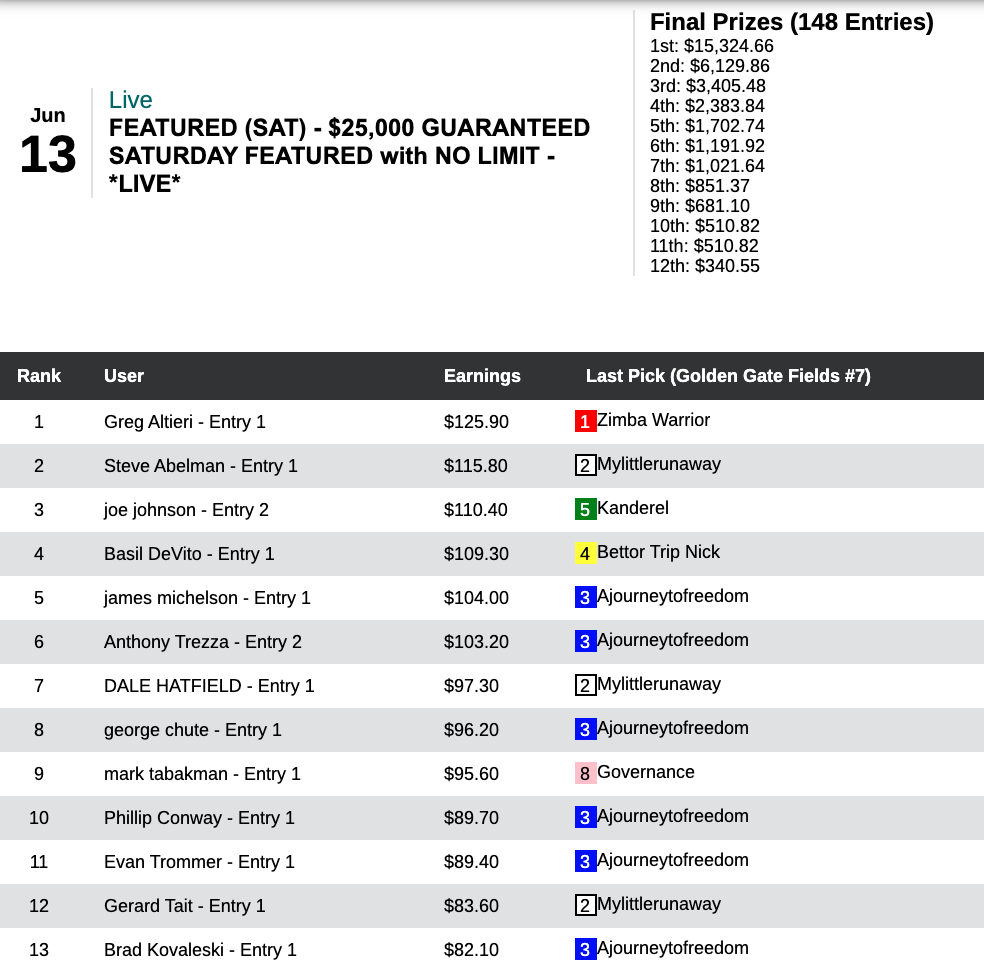 John Marino had 27-1 War Stroll plus three other winners… 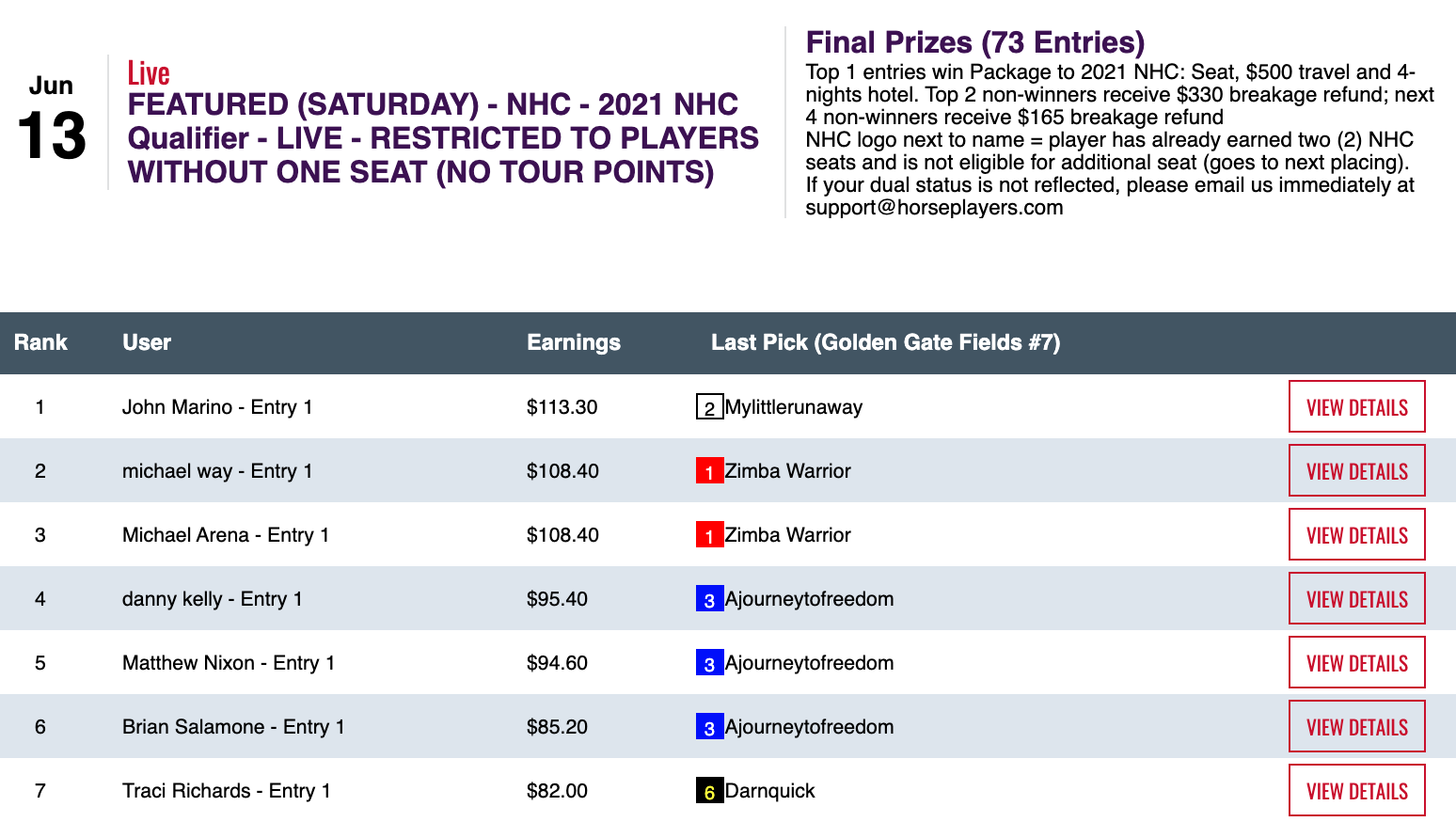 Dixon cashed in the final five races to charge home in front. Scanio (the only other player to crack triple digits) whiffed on the final four races but built up a nice early cushion thanks in large part to the 27-1 War Stroll at Laurel. Last chance for Lone Star comes next week.

Craig Hom had 2 winners, but it was his last of three place collections… 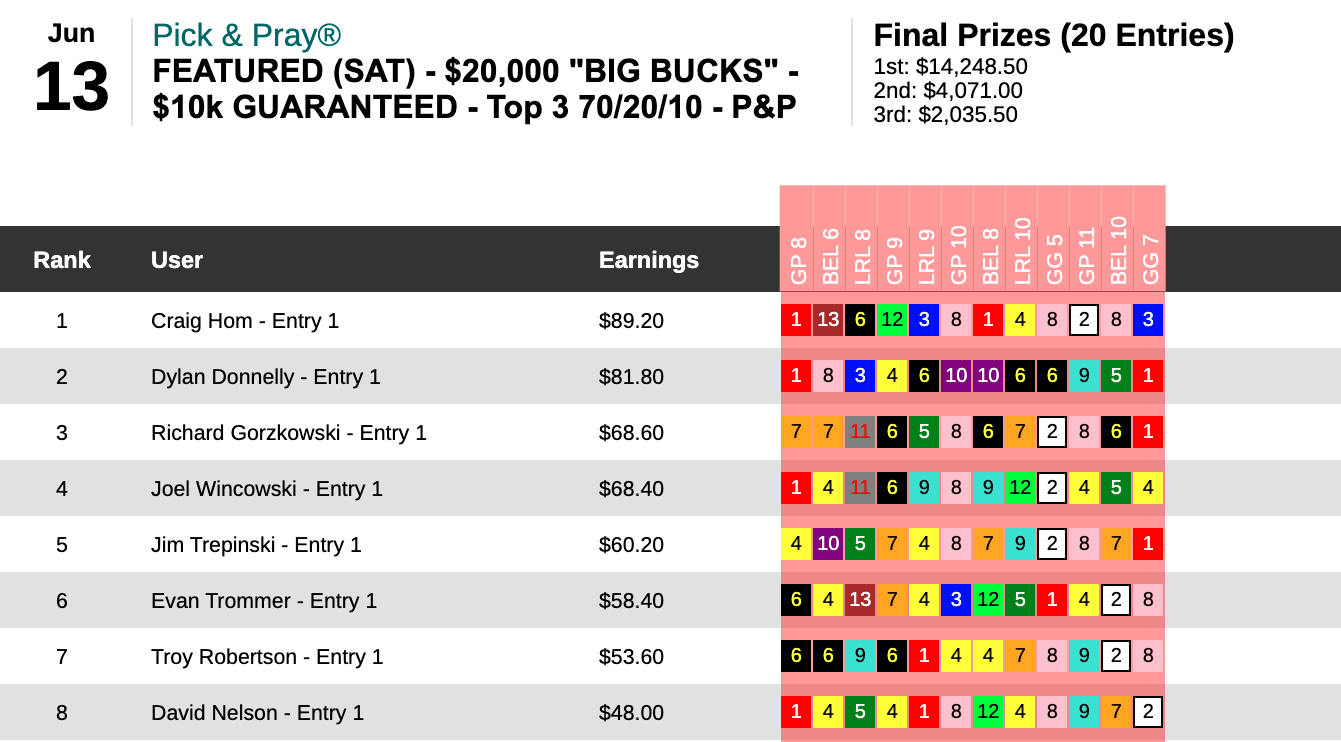 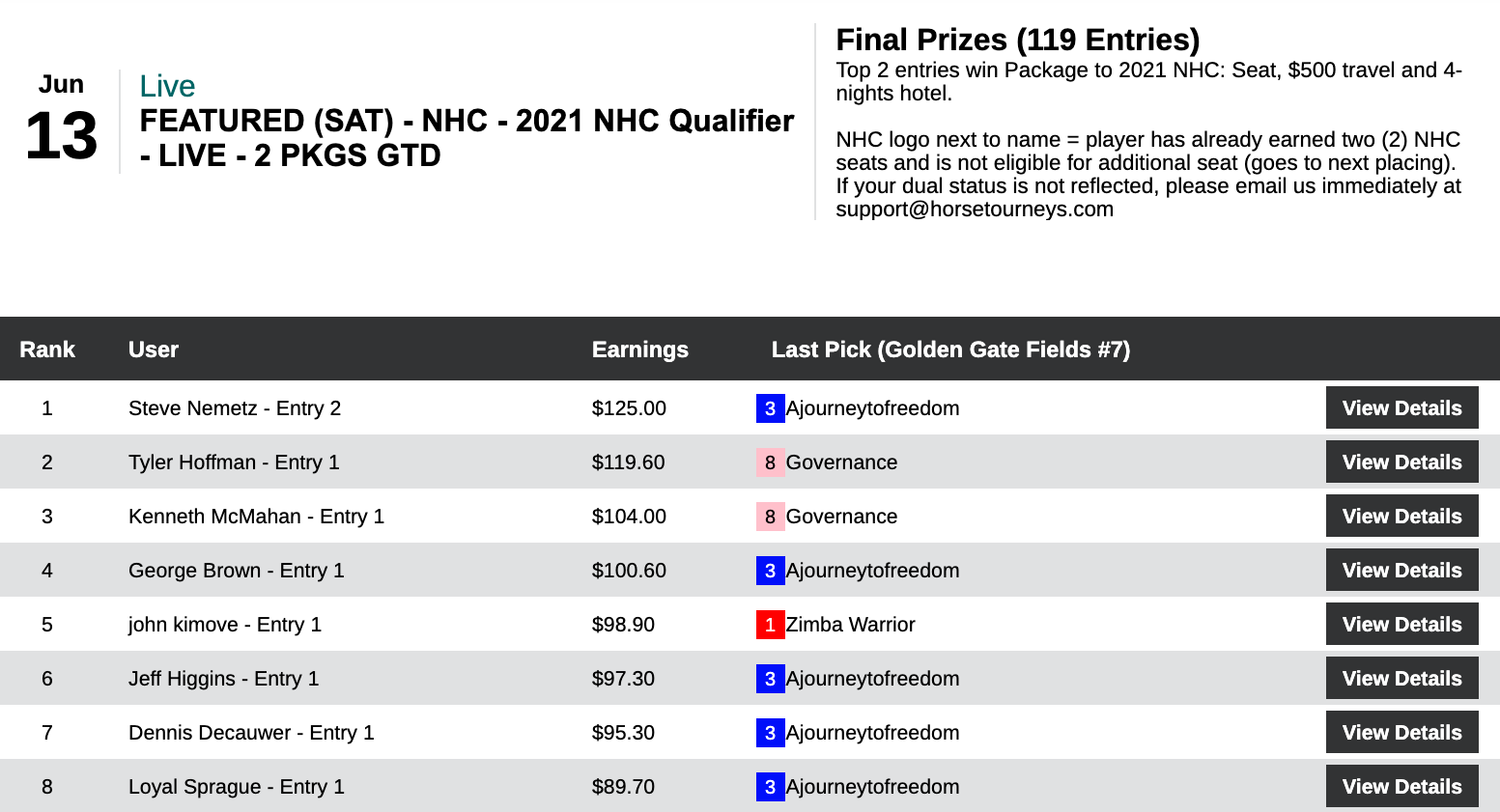 …and that allowed each to punch his ticket to Vegas for the NHC in Saturday’s qualifier here. For Hoffman, the “Bally’s Berth” came just a week after he captured the Santa Anita Derby Challenge at Xpressbet.

Back over at HorsePlayers, War Stroll led the parade of winners (four of them) for Scott Roberts.

Those four winners, plus two runners up, allowed Roberts to lead the parade of players in Saturday’s regular Breeders’ Cup Betting Challenge qualifier.

Moving ahead to Sunday tourneys not won by Dylan Donnelly, a big name accounted for the day’s $15,000 Guaranteed cash game.

Donnelly actually almost won this too. He finished second AND third, adding another $7,199 to his coffers. It took no less than 2019 NHC champion Scott Coles to top him. Coles got off to a very fast start with five firsts and a second over the first seven races, then added two more winners later to walk off with the $11,571 top prize in a game ultimately worth $25,713. Had Coles not picked Irish Heatwave ($6.80, $4.00) in the finale, Donnelly would have annexed another. Tough fields for sure in these big money games!

When you’re on a hot streak, you win the close ones. David Nelson has been hot lately.

Nelson won a BCBC seat last week and a Big Bucks tourney the week before that. On Sunday, he added an NHC seat to his burgeoning portfolio, tabbing 2 winners and 2 runners up and prevailing by $1.90 in the day’s Low Ratio qualifier.

The field for the Spa & Surf Showdown grew by two to 75 on Sunday. 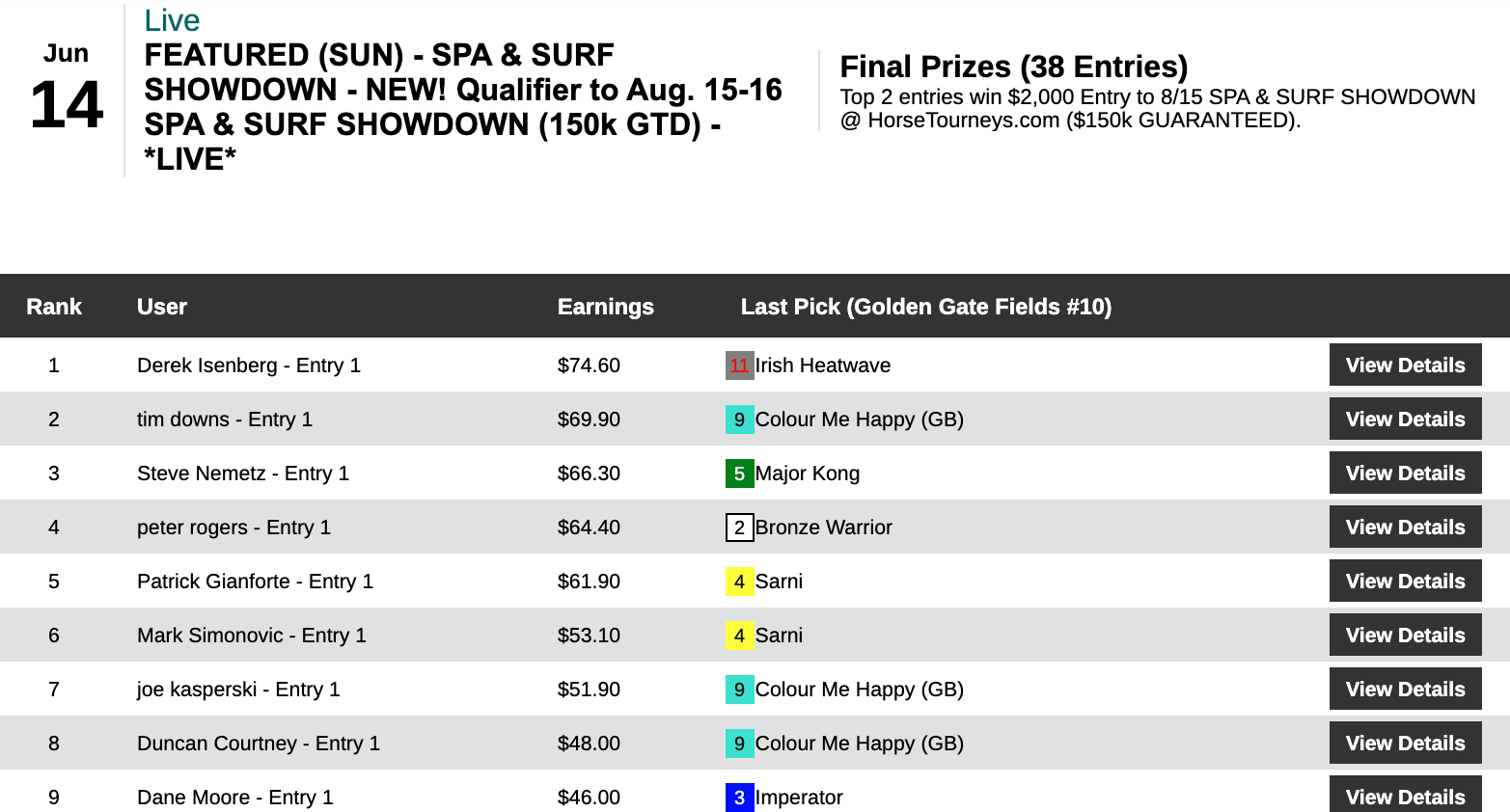 The latest to add their names to the Showdown roster were Derek Isenberg (4 wins, 2 places) and Tim Downs (2 wins, 2 places). Downs’s single biggest collection came via a maximum $22.00 place payoff with Listentoyourheart, the 38-1 runner up in Belmont’s 9th race.

He connected on three successful three-horse boxes—all paying $30 and change for a buck—and that landed him the top prize of $842 out of a final purse of $1,203. 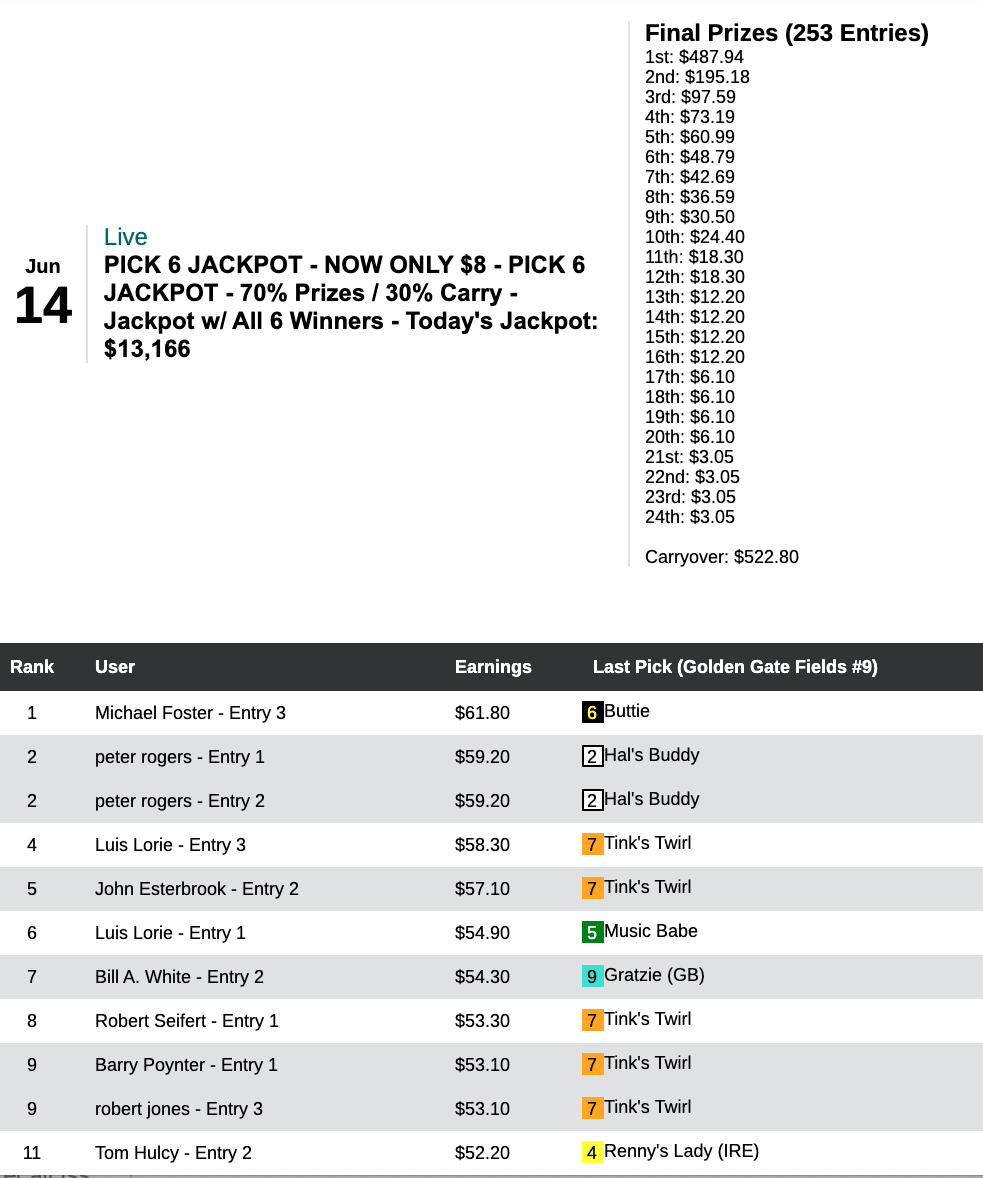 Since no one swept all six races, next Sunday’s Jackpot will start out at $13,688.

A couple of early “programming notes” before we part…

We have several special games on tap for Belmont Stakes Day. 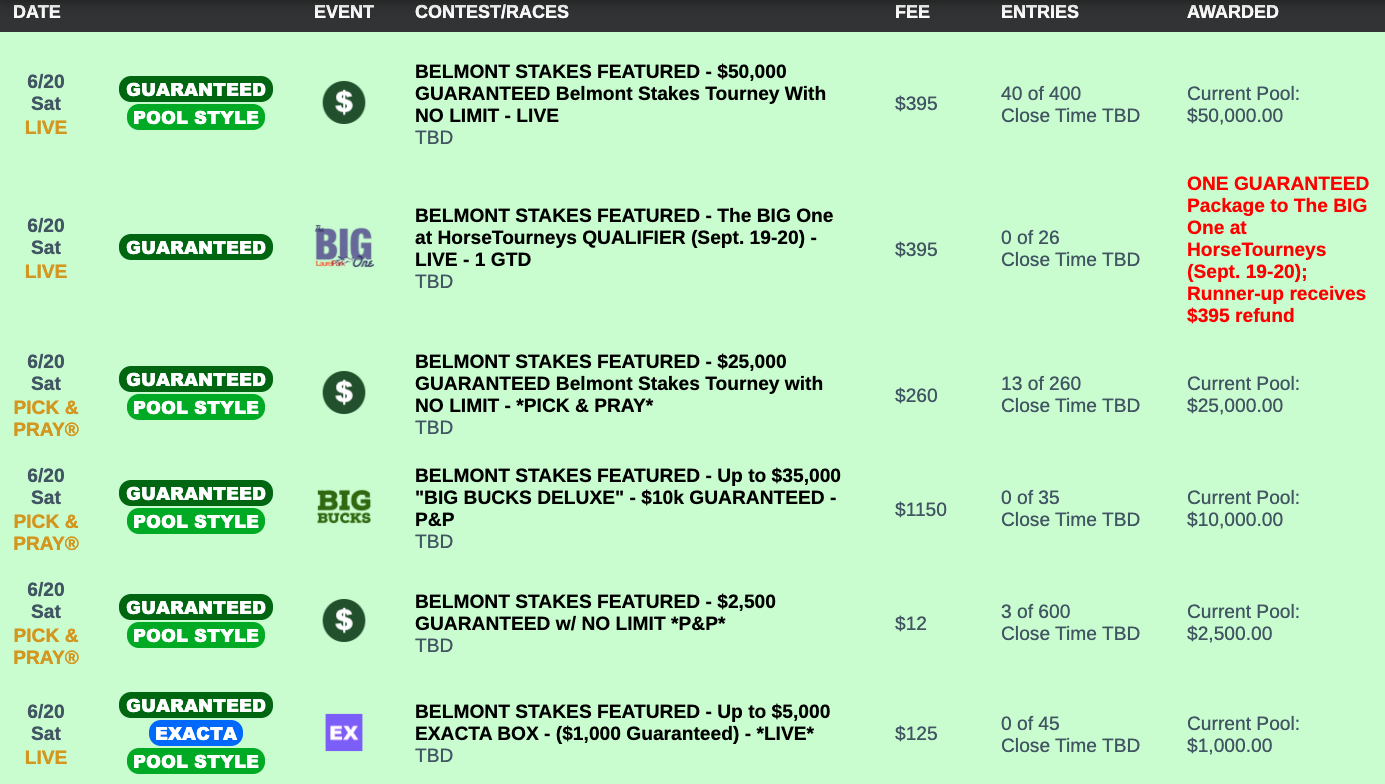 And, starting this week, we will now offer two qualifiers to The BIG One each weekend—one on Saturday and one on Sunday. Time to start filling up that field of 57 with the “high expectation” event just three months away.

Thanks to all who helped make last weekend so exciting. Next weekend figures to be even bigger and better.