President and Founder of HorseTourneys

Today, you might notice a new black button that’s now appearing on the top of the Filters section. That button links to a “Setup Wizard” of sorts for our newest site feature: the ability to create Private Tournaments at HorseTourneys.

END_OF_DOCUMENT_TOKEN_TO_BE_REPLACED

This blog is sent out annually as a reminder of some tweaks we here at HorseTourneys employ to try and mitigate the effects of winter weather on scheduling.  For beginners and veteran tourney players alike, it’s always a good idea for a quick refresher:

As we roll into the winter months, it’s a good idea that we explain our approach to scheduling, which we tweak this time of year.  We’ve employed this approach every year, and it just bears a quick reminder every November or so as chilly temperatures descend across the land.

END_OF_DOCUMENT_TOKEN_TO_BE_REPLACED

The Minnesota Racing Commission has recently notified us of new requirements for Source Market Fees for residents of Minnesota.

Due to our extremely low blended takeout rate (approximately 11 percent blended), HorseTourneys is unable to absorb this source market fee requirement in our existing expense structure. As a result, the State Fee on deposits for Minnesota residents has been increased to six (6) percent of deposited funds. This is only applied to your deposits, not to your entry fees on either site.

We regret that costs for Minnesota residents have increased, but please understand that this additional State Fee is required for us to be able to serve Minnesota residents. We will advise if there is any change to the source market fee requirement moving forward.

Does Live Chat among players belong on a site like HorseTourneys?

It’s a question that we’ve grappled with internally off and on for the better part of… well, only the last decade.

The case for allowing Live Chat is that it adds to the entertainment value of the product, creating a higher level of engagement and fostering an even greater sense of community among our player base.  Anyone who has played tournaments at on-site, brick-and-mortar locations has witnessed the kind of camaraderie that typically comes along with a major tournament event.  While online chat could never replicate that experience, it would at least bring some of it to online play.

END_OF_DOCUMENT_TOKEN_TO_BE_REPLACED

Participating in Live Chat at HorseTourneys is a privilege.  This privilege is reserved for those that are able to comport themselves appropriately.

The following are most (but not all) of the kinds of conduct that will not be tolerated:

Don’t curse, and don’t say vulgar or disgusting things.  “Damn” is OK.  If you think it’s going to be a problem otherwise, don’t say it.

Don’t attack HorseTourneys/HorsePlayers management, whether as a whole or individual members.  Don’t attack our business partners like the NTRA, Xpressbet, Breeders’ Cup or our partner racetrack management.

Constructive criticism is fine.  Stating that you wish a jockey would attract a lethal case of Covid and die is not.

Don’t espouse ridiculous conspiracy theories, especially as it relates to the operation of HorseTourneys/HorsePlayers.

Don’t post incessantly, unless you truly have something constructive to say.  Don’t yap simply to see your own voice.

Don’t tout services (such as selling picks, podcasts, etc.) and don’t shill or advertise for other services, particularly if in competition with HorseTourneys/HorsePlayers.

Chat activity may be monitored, both in real time and retroactively.  Moreover, players will have the ability to report unacceptable conduct via the Customer Support Form.

Any players discovered to have violated the Chat rules, depending on the severity, will either receive a warning, or lose the privilege to participate in Live Chat.  In some cases, HorseTourneys/HorsePlayers accounts may be revoked outright.

Please be respectful, and enjoy this feature.

Please note that players are permitted only one account across both sites. If you think you signed up a new account in error, please reach out to us at support@horsetourneys.com and we’ll gladly take care of the situation for you.

So just remember, you use your same login email address and password at both HorseTourneys.com and HorsePlayers.com. Email us with any questions.

This blog is sent out annually as a reminder of some tweaks we here at HorseTourneys employ to try and mitigate the effects of winter weather on scheduling.  For beginners and veteran tourney players alike, it’s always a good idea for a quick refresher:

As we roll into the winter months, it’s a good idea that we explain our approach to scheduling, which we tweak this time of year.  We’ve employed this approach every year, and it just bears a quick reminder every November or so as chilly temperatures descend across the land.

END_OF_DOCUMENT_TOKEN_TO_BE_REPLACED

HorseTourneys will unveil a special three-tourney series in 2021, the Tourney Triple, that combines two of the year’s most popular online events with a brand new competition in April—and that offers bonus prizes** for top finishers, including a $2 million bonus should a player sweep the three events and a $1 million bonus should someone win two of the three series legs.

The Tourney Triple will begin with the January 9-10 Flo-Cal Faceoff, a Saturday-Sunday, $1,500 buy-in tourney in which players make mythical selections on each race from the days’ full cards at Gulfstream and Santa Anita. Earlier this year, Thomas Blosser of Cornville, Arizona, won $88,000 in the inaugural edition of the Flo-Cal Faceoff, which had a total purse of $225,000. Feeders and qualifiers for the Flo-Cal Faceoff are now available.

The Tourney Triple will conclude on August 14-15 with the highly popular Spa & Surf Showdown, a two-day, full-card tourney featuring racing from two of America’s showpiece racing venues, Saratoga and Del Mar. The most recent edition of the Showdown last month featured a record online purse of $644,000 and was won by Scott Fiedler of Babylon, N.Y. Fiedler earned a winner’s share of $232,112 plus an additional $16,000 in day-bonus money. In 2019, NHC Hall of Fame Paul Shurman of Dix Hills, N.Y., won $109,000 in the first Spa & Surf Showdown. The entry fee for the 2021 Spa & Surf Showdown is expected to be $2,500.

(Dates for the Tourney Triple competitions are tentative and subject to change.)

In addition to the $1 Million bonus for winning two of three, and the $2 million bonus for a sweep, there will be bonus prizes awarded to the top three overall performers in the Tourney Triple series—based on a points formula that will award 100 points for a first-place finish, 99 points for second, down to 1 point for a 100th-place finish. The overall points leader at the end of the Tourney Triple will receive a $10,000 Breeders’ Cup Betting Challenge (BCBC) entry and a National Horseplayers Championship (NHC) entry (or $5,000 in lieu of an NHC seat if the winner is already double-qualified to the NHC). The person with the second-most points will earn a $10,000 BCBC entry, and the third-place points finisher will receive an entry to the 2021 edition of The BIG One at Laurel Park plus $500 for travel.

“In a relatively short period of time, players have made the Flo-Cal Faceoff and Spa & Surf Showdown two of the most important events on the contest calendar,” said McKay Smith, President of HorseTourneys. “By adding the Players Championship and tying all three together with an attractive bonus program, we believe that we will be even better positioned to recognize and reward the people who are truly the lifeblood of the racing industry—the players. We also want to thank our racetrack partners including those at The Stronach Group, The New York Racing Association, Inc., Keeneland and the Del Mar Thoroughbred Club for their ongoing support and cooperation in making exciting tourneys like these available to racing fans.”

Per a joint decision between HorseTourneys and Laurel Park, The BIG One will be played online this year at HorseTourneys.com.  The dates will remain the same—Saturday and Sunday, Sept. 19-20, 2020.

END_OF_DOCUMENT_TOKEN_TO_BE_REPLACED 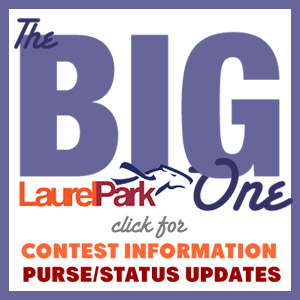