Steven Meier had been vewy, vewy quiet during the first half of Friday’s 10-race, $7,500 Guaranteed Pick & Pray. After five races, he had fired almost all blanks and had collected just $2.10. There was big game to be had out there, though, with the pot having swelled to $9,080 by the tourney’s start time. Meier obviously needed to hunt down some prices.

Suddenly, it was open season and Meier started to hit his targets. Over the next four races, he had bagged two wins and a place, but he was still behind and needed to successfully track the scent of one more longshot hiding in the PPs. Time was running out. 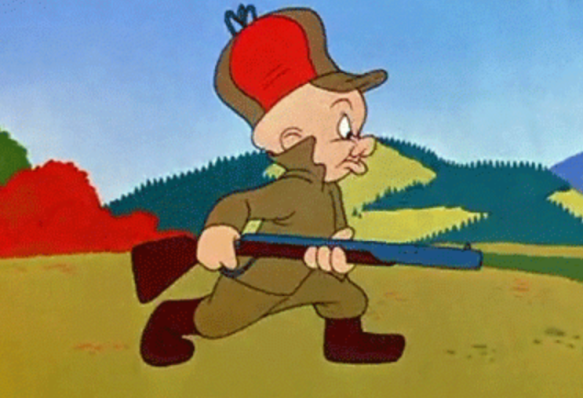 The Rudy Rodriguez-trained longshot in the 10th at Saratoga had shown speed and faded in a couple of prior grass sprint tries, and now he was stretching out. Meier, had an inkling, though, that this was no mere rabbit. he decided to pull the trigger.

Elmer Fudd’s smart triumph at Saratoga reminded us yet again that a contest is never over until the final race…and that life doesn’t always imitate art.

The richest tourney of the weekend was Saturday’s $15,000 Guaranteed Pick & Pray, which finished up with a total purse of $18,728.

Garry Addley reeled off three winners in a row at one point en route to six wins and two places. That got him top money of $8,387. Addley’s biggest collection came with Now We Are Nine ($14.80, $6.90) in the 12th at Woodbine. The way Saturday unfolded, however, Addley’s six winners were only third most on the day.

Another seven-win performance was posted in Saturday’s package qualifier to the Orleans Fall Classic.

And actually it was not Paul Parker who had the seven wins. Parker “only” had four firsts and two seconds…but he had $32.70 worth of collections in the last two races to jump himself into first. The seven winners belonged to runner up Kyle Snowden, who also won a $1,000 package to Vegas on October 17-19. Not only did Snowden have seven winners (plus a place), six of those winners were consecutive.

The late cash meant a $3.00 victory—and a $10,000 BCBC entry—for Graham. (You’ll note that one player went the “Play the 7” route. No complaints were heard afterwards about the “strategy”…perhaps because it was unsuccessful.)

Now We Are Nine made the difference for Adam Lewis as well in Saturday’s Keeneland qualifier.

In this case, Lewis (5 wins, 2 places) scratched into Now We Are Nine, his alternate selection, after his initial pick was scratched following a surface switch.

Greg Bone had the final two contest race winners—Now We Are Nine and Succeedandsurpass ($6.80, $4.20) in the 5th at Del Mar. In this case, Bone had chosen Now We Are Nine from the outset, but got switched to his backup play when his first choice at Del Mar got scratched. That alternate play here again made the difference between victory and defeat since Bone finished just $2.90 ahead of the third-place contestant. Joining Bone at Bally’s in February will be runner up John Kennedy, who also had “shortshot” Succeedandsurpass to get up into prize territory in the final race.

On Sunday, there were two pre-eminent stars. They may have to share the day’s spotlight, but they certainly didn’t share much with those they played against.

It was tight at the top of Sunday’s NHC qualifier with Sean O’Malley and Sarah Wiener separated by just a dime. Happily for them, there were two spots guaranteed so both punched their respective tickets to Vegas. Wiener (4 wins, 2 places) had a big late hit with Love and Love ($19.40, 4.90) in a five-horse off-the-turfer at Saratoga. Three wins and two places got the job done for O’Malley.

O’Malley used the exact same 12 picks here…which is sort of interesting in that both the NHC and the BCBC qualifiers were conducted in live-format mode (unlike most of the weekend’s other featured tourneys). So O’Malley “could” have changed a pick here or there…he just decided not to. Good decision!

Howard Welsh couldn’t change any of his picks because the two tournaments he played in were both Pick & Prays. He went with the same picks in both events. Good decision!

Welsh nearly doubled the best score among his 10 rivals in Sunday’s $10,000 Guaranteed Big Bucks tourney to collect the first prize of $7,836. This was the second straight Big Bucks win for Welsh who also captured the most recent edition of it held on August 4. This time around, Welsh had four winners—all paying double digits—plus a place collection that was worth the maximum $22.00. His score of $120.60 was the highest of the day—and since I told you that he played the same picks in another featured event, I guess that gives away the result of that one…

Welsh had a good day and so did Welch…Charles Welch.

Welch won a last-chance, $1,000 package to next Saturday’s Monmouth Super NHC/BCBC Challenge for finishing second to Stephen Luca, who had three firsts and five seconds, including a $19.00 place collection in the final tourney race. Also winning a Jersey Shore package was third-place finisher Stephanie Davis.

For Luca, it was a happy ending to a difficult weekend. He hobbled his way on crutches through Saturday’s Laurel Champions tournament after throwing his back out the night before. Word was that he suffered the injury while playing the always-dangerous game of cornhole. Apparently he was bending down for something—a bean bag or what not—and didn’t sufficiently flex at the knee while doing so. On one hand, this is a mistake any of us could make. However, this seemed like a particularly surprising error for Luca to commit since he is a highly-skilled physical therapist and theoretically would be more likely to utilize all the proper safeguards while bending down for something. We are not here to rub salt in Luca’s wounds, though. Instead, we will look at the glass half full and point out that he will not only enjoy a $1,000 package at Monmouth Park next Saturday…but perhaps a very convenient handicapped parking space there as well!

No parking credentials will be necessary at The BIG One since transfers to and from the track are just one of the many amenities afforded to all competitors. The beneficiaries of such largesse last weekend were Karl Barth and John Fisher.

Barth had a quick start and prevailed thanks to five winners. Fisher dwelt at the start, spotting the field five cashless races, before hitting four wins and a place—including Follow My Lead ($15.30, $7.50) in the contest finale at Woodbine—to grab second.

…a $3,000 entry to Keeneland on October 13, courtesy of Sunday’s Low Ratio, entry-only qualifier.

Bruce Pratt hit the first three races, then went on a prolonged drought before cashing a late winner at Saratoga.

Then he essentially doubled his score with a $105.75 collection (that no one else had) in the final race (the 11th at Woodbine) to leave no doubt as to the first-prize recipient of $774.

In Sunday’s $8 Pick 6 Jackpot tourney, victor Chip Sarna only had two of the six race winners…

…but they were the two highest prices of the six. Since no one had all six, the jackpot for next Sunday will be approximately $2,611.

Whether you won two grand prizes last weekend, one grand prize…or simply managed not to throw your back out…we hope you had an enjoyable time. We’ll be ready to do it again next weekend with a host of lucrative tourneys, including a special $65,000 Guaranteed cash game on Travers Day. See you then!