Two winners out of 15 races isn’t what most would call a great day. Sure, we’ve all had days when we’ve cashed zero tickets playing well more than 15 races. But a 2-for-15 day isn’t typically one that leaves any lasting memories.

A longtime fixture on the handicapping contest scene, McClyment registered just a pair of victories and a pair of second-place finishes in Saturday’s big $70,000 Guaranteed game that wound up with a total purse of $84,880. One of those winners was a doozy, however—Jordan’s Henny at 59-1 in Gulfstream’s Hurricane Bertie Stakes. That, plus his other three collections gave McClyment the margin he would need to claim the first-place prize of $38,196.

McClyment held off a fast-closing Anthony Kite whose last-race selection nearly got up in time after trouble earlier on, but had to settle for second. Kite, who won $15,278 for the second-place finish, put our a tweet on Saturday night that conveyed what we’ve all felt at one time or another.

Stay tuned for the date of our next special, big-money cash game.

Of course, every weekend day offers a tourney with some pretty solid cash. Friday was no exception—and the result had a familiar ring to it.

Steven Meier recorded three wins and two places to win top money of $3,867 in Friday’s $6,000 guaranteed event that ended with a total purse of $7,734. Less than a week earlier, on Saturday, January 20, Meier won $9,733 in our $20,000 Guaranteed tourney and also a full package to the Horse Player World Series in a qualifier for that annual event.

We hope that Steven didn’t consider this to be an “off week” for him!

It certainly wasn’t an off week for Kevin Engelhard.

He won a seat to the 2018 NHC by winning our regular qualifier at HorsePlayers with what was the high score for the day–$113.00 from just 10 races.

Like Steven Meier (and Kevin Engelhard as well), Brandon McFarlane also had three winners and two runners up from 10 races.

In Brandon’s case, that combo was good for a $1,500 entry to March’s Horse Player World Series

Seats for the February 8 NHC Last Chance tournament at Treasure Island continue to fly out of HorseTourneys at a high rate.

On Saturday, Mack McClyment was the undisputed star of the day. But there were other big winners as well.

David Curich, Stephen Brodhay and Joseph Loiacano each won full packages (entry, hotel and travel) to the Horse Player World Series and all three “got there” despite not having cap horse Jordan’s Henny in Gulfstream race 9.

Scott Fitzgerald DID have Jordan’s Henny (#2) in the Hurricane Bertie, and that made all the difference in Saturday’s “regular” NHC qualifier.

No one had Jordan’s Henny in the NHC Super Qualifier at HorsePlayers on Saturday.

In the free-for-all that ensued, it was Curtis Meyer who prevailed by $15.50 to capture the prized NHC seat.

The Sunday highlight was our second qualifier to the 2018 renewal of The BIG One this coming September at Laurel Park.

Scores were not gaudy in this affair. In fact, showing any kind of flat-bet profit would have taken home the all-inclusive package to Maryland. The only contestant who did turn a profit was Rick Broth, who recorded four wins (including three in a row during the early stages) and one place. Rob Henie got in the door late after catching a $5.80 place horse in the final contest race.

How they got there, though, matters not. Broth and Henie now join Bruce Dagostini and Karl Barth as the first four of what will be 50 online qualifiers to the “high-expectation” tourney of the year on September 22-23.

A couple of other Sunday tourneys had similarly interesting outcomes.

In the NHC Super Qualifier at HorsePlayers, William Kennedy got the prize thanks to three wins and three runners up. The winners weren’t all that much to get excited about—all were 7-2 or less. But his three place collections were key. They paid $17.60, $9.60 and $6.80. Every top-two runner counts!

Jon Van Niel did something that is difficult on the face of it…and even harder given what his strategy was.

Cruz Talamantes is certainly getting the hang of these Sunday $2,000 Guaranteed Exacta tourneys.

By registering five three-horse-box victories out of 12 races, Talamantes won this for the second time in the last three competitions. This time around he earned $1,274 from a pool-style total pot that finished up at $2,545.

In our other two featured tourneys on Sunday, an Eclipse Award winner and an Emmy Award winner each figured prominently.

Henry defeated Richard Englander ($2,400), who did win an Eclipse Award—two of them, actually—as North America’s leading owner in both 2001 and 2002.

We horseplayers are nothing if not Renaissance men and women, of course. Our skills go well beyond the realm of win, place and show. (At least that’s what I keep telling myself.) And our winner of Sunday’s Treasure Island NHC Last Chance qualifier was the guy on the left. 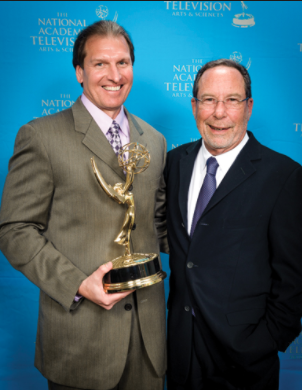 That’s FOX Sports producer extraordinaire Pete Macheska holding the hardware alongside Ed Goren after one of FOX’s many Sports Emmy hauls over the years. A longtime racing fan, Macheska is every bit as good at picking the ponies as he is at capturing close plays at the plate or calibrating those strike zone boxes.

Pete will lead a team of 10 more (more than a table’s worth) to Treasure Island. Though only nine seats will be needed since Jon Van Niel’s two crafty entries got him two prizes here as well. The other seven winners were Andrew Champagne, Kerry Bassore, Frank Santeramo, Michael Kavana, Mark Stovall, Richard Smith and Karen Richards.

There was a lot going on this past weekend between the Rainbow 6 carryover, Pegasus World Cup Day (which included Ed Olczyk’s popular come-from-behind win thanks to a Gun Runner-West Coast exacta in the Pegasus World Cup Betting Championship), California Cup Day and, slightly before that, the Eclipse Awards. We’re delighted that, along the way, you still managed to spend some time with us. Thanks for reading and have a great week ahead.