Our NHC direct qualifier last Saturday generated a fair degree of buzz on social media for how the competition concluded.

It was a Live-format tourney with two NHC packages on the line. Gary Wright led most of the way and heading into the final race of the tourney, Race 8 at Santa Anita, he had $138.50 — $14.80 more than his nearest pursuer, Anthony Robb who was at $123.70. More importantly, since finishing second was as good as finishing first as far as winning an NHC seat was concerned, he had a $25 advantage over the third-place contestant. Wright could afford to let one person go past him, but not two.

When 12-1 shot Got Even won the 8th at Santa Anita and paid $27.40 to win and $14.00 to place, it created a worst-case scenario for Wright. The final standings looked like this:

Robb had selected Got Even and blew past Wright to secure first place. The third-place contestant who had trailed Wright by $25 did not use Got Even, but several players behind him did, including G. West Munz. The win by Got Even (ironically named, perhaps) brought Munz into a tie with Wright. And since Munz had registered five winners in the contest to Wright’s four, Munz won the tie-breaker for second…and, crucially, the NHC seat that went along with it.

Wright’s play in the 8th, Gangster, went off at 9-2 and ran 4th. One successful tournament player felt that Wright could have made a more strategically sound final play:

Others generally agreed, but also acknowledged that Wright’s final decision was less than obvious.

Charlie Davis, a top tournament player who was third in the most recent NHC, went on to outline his general end-game blocking strategy in more detail.

Even when one is armed with unassailable game strategy, it seems pretty clear that a player’s individual handicapping opinion still plays a major role. Let’s look at the Santa Anita 8th race chart: 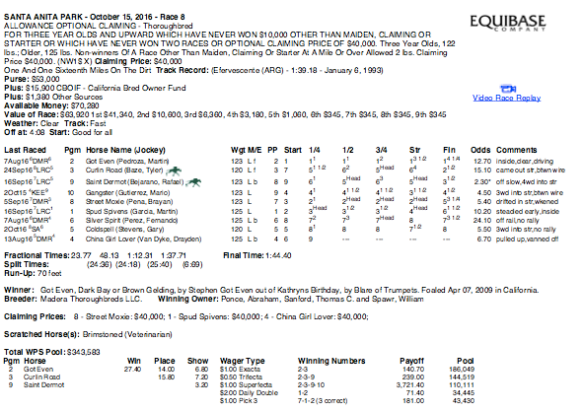 The favorite — theoretically the least dangerous to Wright but also the one most likely horse to provide him some sort of return — finished third. There were three horses between 5-1 and 6-1 that were all off the board as well.

There were three horses in the 10-1 to 15-1 range and two of them comprised the exacta. But what if Wright simply hated those two horses that ran well? What if he felt, as Davis put it, that those two couldn’t win? Or what if he just really liked Gangster?

One fairly safe assumption is that if you are in first place heading into the last race of a tournament, your handicapping judgments that day have been pretty much on point. It can’t be easy to suddenly go against your better judgment in an attempt to now simply try to outguess the competition’s picks. In this case, it seems as if the five horses that were 6-1 or less would not have unseated Wright from 2nd place had they won. At the same time, had Wright eked out a place payoff from any of them, it would have effectively protected him from the 12-1 shot that did win. Further complicating matters is the fact that prices can fluctuate a lot in the last five minutes of wagering when this tough decision is typically being made.

Some players take late-game blocking very seriously. Ryan Steigmeier, winner of Sunday’s Keeneland NHC-BCBC Challenge says that he looks for patterns among established players that can help him block more effectively when such situations do pop up.

“I’ll always look to stop people from blowing me up,” he said. “I’ve studied many of the top players. A lot of them have tendencies in terms of which horses they pick. Some rely heavily on trainer angles…others on Thorograph. I don’t use Thorograph except at the end of a contest when I might try to gauge who others will be playing. The fact that I have a lower profile in the tournament world can be a plus for me as far as making me less predictable to others in those same situations.”

Having a read on an opponent can certainly be helpful when battling against one or two foes. But successfully blocking a dozen or more players all gunning for your position would seem to require a good measure of luck as well.

I don’t think there are any easy answers here. I do think the final-race process is made somewhat easier when you don’t like the race at all…when you have no firm opinions one way or the other. Then you can simply play the odds…or your opponent’s perceived tendencies…or whatever. When you do have an opinion, though, things can get messy. Very messy.