It was an active weekend in the tournament world — both onsite and online. HorseTourneys sends hearty congratulations out to Brent Sumja, who won the three-day Orleans Fall Classic this past Thursday, Friday and Saturday in Las Vegas. And also to Ryan Steigmeier, who scored a resounding victory in Sunday’s Keeneland NHC-BCBC Challenge. (We spoke to Ryan earlier today, and you can read more about his terrific win in our separate blog post about the Keeneland tournament.)

Meanwhile, there was plenty going on right here at HorseTourneys all weekend. Our highest-scoring (and just plain craziest) tourney of the weekend was Saturday’s 2-seat-guaranteed NHC qualifier. 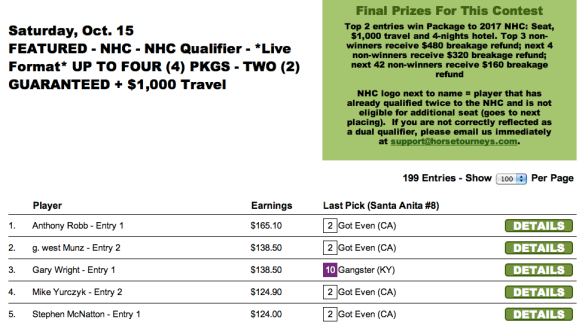 When Got Even ($27.40 to win, $14.00 to place) won the final contest race at Santa Anita, it threw the standings board for a loop. Anthony Robb wound up as the clear cut winner. but we had a tie for the second and final NHC-qualifying spot between G. West Munz (who had Got Even) and Gary Wright (who led for most of the day but did not have Got Even). It came down to our first tiebreaking criterion — most number of winners — and Munz won that tiebreaker 5 to 4. It was a wild finish…and certainly a tough beat for Wright, who is due some good karma in the weeks ahead.

That was the case on Sunday in our $7,500 guaranteed game when Craig Horn played #4 Woodstock Memory in the finale. Though Woodstock Memory got run down in the last few jumps, the $9.20 place mutuel gave Horn the top spot (and the $3,750 first prize) by $6.70 over Jamie Harris.

Sunday was also the first of what will be several qualifiers to the Hawthorne NHC Fall Super Qualifier. 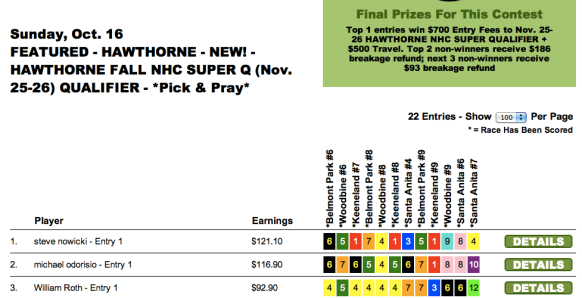 Steve Nowicki posted one of the day’s highest scores in punching his ticket to Hawthorne where, on Nov. 25-26, there will be two separate one-day tournaments offering a bevy of NHC spots. All HorseTourneys qualifiers, of course, get their entries covered for both days ($350 per day) plus $500 for travel.

Tom Michalczewski proved that you don’t always need bombs to finish with a flourish: 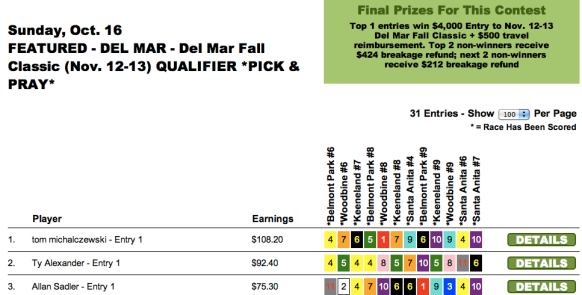 He hit 5-2 shots in the last two races to propel himself to the top spot in our Del Mar Fall Classic direct qualifier. He wins a big $4,500 package to that lucrative event.

Our qualifier to the Twin Spires Online Championship was very well attended and, as a result, we had the happy duty of punching four tickets to that competition. Our winners were Bill O’Neal, Howard Blumberg, Pete Acocella and Tom Ryan.

Last but not least, congratulations to David Sullivan who won the $600 first prize in our $1,500 guaranteed exacta box tourney despite making just one winning three-horse exacta box plays out of 12 races. But what a winner it was! 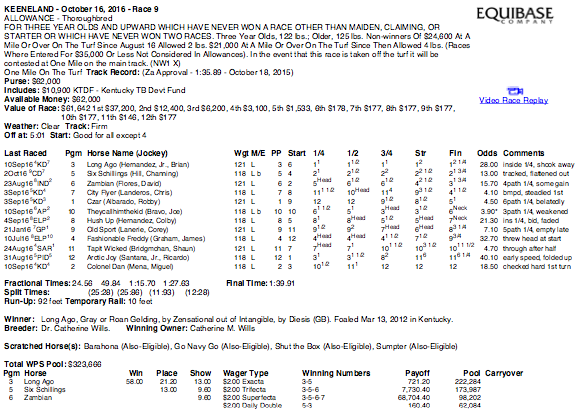 Congratulations, David. And we hope you had this one with real money as well!

May all of you have a winning week ahead.