Scott Fiedler can certainly afford to buy his way into the $150,000 Guaranteed Flo-Cal Faceoff—but now he won’t have to.

The winner of $248,000 in last month’s Spa & Surf Showdown, Fiedler qualified himself on Friday for the January 9-10 Faceoff, the first leg in the new 2021 Tourney Triple series.

Fiedler and Isenberg are now among the first to land spots in the Flo-Cal event, which calls on players to make full-card selections on two days of racing at both Gulfstream and Santa Anita. Should a player win any two of the Flo-Cal Faceoff, April’s first-ever Players Championship and/or next August’s Spa & Surf Showdown, he or she will win a $1 million bonus. Should someone win all three, the bonus gets upped to $2 million.

Another player who is no stranger to the HorseTourneys winner’s circle is Mike Yurczyk. 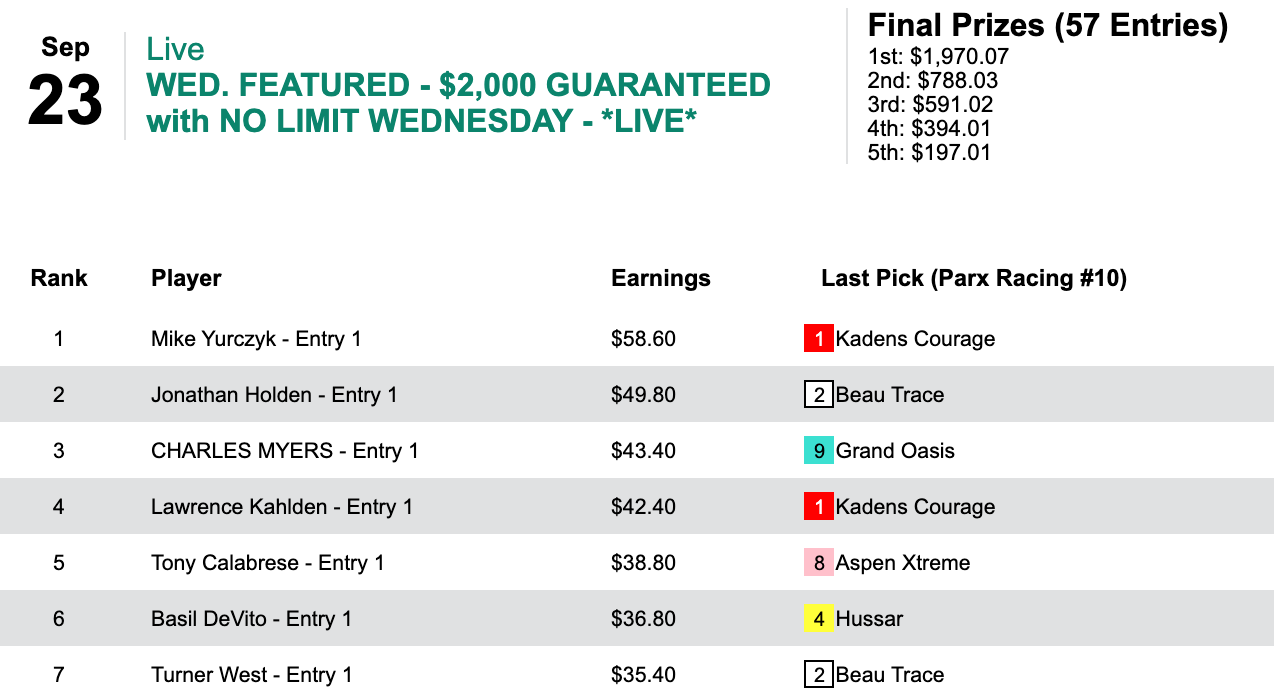 A strong seventh just three days earlier in The BIG One, the Minnesota native kept the good times rolling by winning $1,970 in Wednesday’s $2,000 Guaranteed cash tourney, which closed with a final purse of $3,940. Yurczyk (3 firsts, 2 seconds) hit the final two races with a pair of 2-1 shots to get up for the victory.

Getting back to Friday action, Tom “Hit ‘em Where They” Arndt was the winner of the day’s $10,000 Guaranteed Pick & Pray.

They say money goes to money and that’s double true here because Arndt, who won $6,583 from a final pot of $14,629, also won $9,260 in the previous Saturday’s Big Bucks tourney. Arndt collected a $7.80 place payoff in the final contest race to grab first over…Scott Fiedler.

The two players to crack $60.00 were the two to emerge victorious in Friday’s Keeneland Fall BCBC/NHC Online qualifier.

Congratulations to Bradley “Ready Willing and” Abell and Dennis Tiernan, each of whom now have their $3,000 entries for October 10th fully paid up.

Kevin Willett was the lone player to clear that bar in this one, thanks to his 5 winners and 1 runner up. Those six cashes sent a $10,000 BCBC entry his way.

With a bulky field of 340, it was no surprise that scores were significantly higher at the top of the leaderboard of Friday’s $75 NHC qualifier at HorsePlayers.

The highest of the high belonged to Linda Rodriguez. “L-Rod” recorded the high score of the day with her 4 wins and 3 places.

She will be joined in the big room at Bally’s by runner up Jim Sebes who had 5 winners and 1 almost-a-winner.

On Saturday, the year’s final free NHC qualifier took place at HorsePlayers, and scores were predictably lofty for such a highly-attended event.

Scott McFaden came out smoking, cashing in the first six races en route to victory in the field of 2,086.

The other two seats went to second- and fourth-place finishers Tom Zayac and Bob Farah. That’s because third-place contestant “Get” Christy Moore is already double qualified and was just here for the Tour points…of which she got plenty.

Friendly disclaimer: All NHC results—and especially those for free contests—are unofficial until the NTRA completes its Tour membership audit. And, yes, on rare occasions non-members do find their way into these games (but almost always by mistake).

Among Stephen McNatton’s 4 wins and 3 places was a last-race, $3.60 place payoff with Originaire in the 9th at Santa Anita.

Originaire made all the difference for McNatton, however, as he eked out a $1.70 triumph in Saturday’s “regular,” $179 Breeders’ Cup Betting Challenge qualifier at HorsePlayers.

You can, thus, say that two of Saturday’s biggest games at HorsePlayers were won by McNatton and McFaden.

The other was won by Joseph Rosen.

He had 5 winners and 3 placers, topped by Extra Hope ($22.80 to win) in the 6th at Santa Anita. That added up to a $10,000 Breeders’ Cup Betting Challenge seat in Saturday’s Low Ratio play-in. To his credit (and to the chagrin of his opponents), Rosen’s winning total of $100.90 in this Low Ratio tourney was only $2.90 less than Stephen McNatton’s in the “regular” qualifier.

Back over here at HorseTourneys, Paul Fishman earned $11,250 in Saturday’s $25,000 Guaranteed tourney.

This game offered especially good value as the minimum was barely reached. That meant that the takeout was just 4.8%. Fishman took advantage by connecting on five winners, including Extra Hope and Big Engine, who paid $23.40 in capturing Belmont’s 7th race. 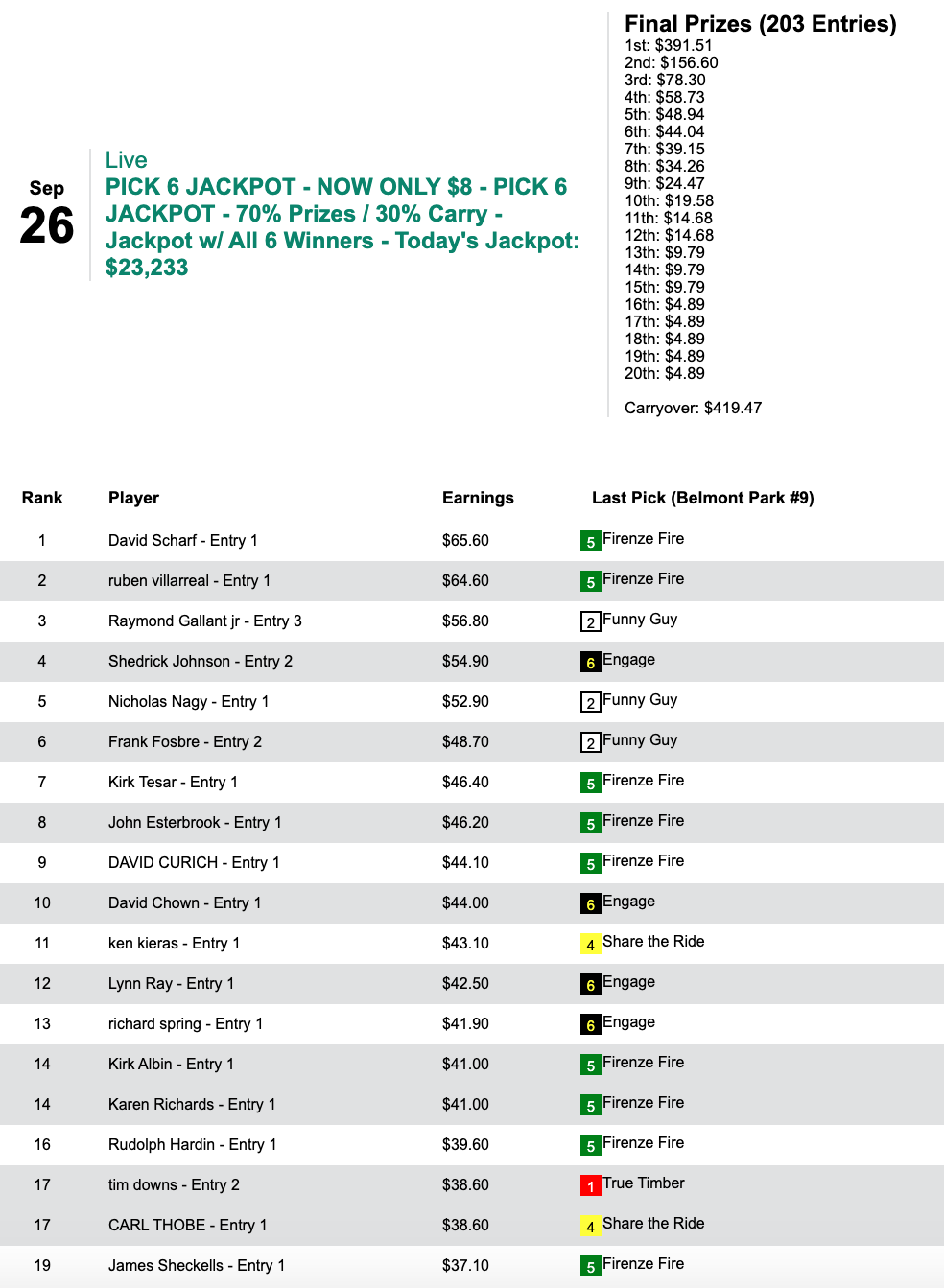 The entry fee was 143 times higher for Saturday’s Big Bucks game. John Farrar made the $1,150 price tag look like a bargain, though.

On Sunday, Alan Baze recorded the high score of the day in taking the $15,000 Guaranteed Pick & Pray.

The Sunday Big Bucks tourney was interesting—as much for who wasn’t in it as for who was.

A little conspicuous by his absence in this one, though, was John Farrar. After he won the Saturday Big Bucks, you might have expected him to play in this one too, right?. It’s not like he was too busy to handicap…because he was second, as noted above, to Alan Baze in the $19,000 game, and his score there would have taken the Sunday Big Bucks shindig by open lengths. One might speculate that Farrar just prefers Pick & Prays to live-format tourneys. Had he pretended that it was a Pick & Pray, he would have become the first player to sweep a weekend’s two Big Bucks games. Of course, it should be noted that, based on my contest performances of late, I am in no position to question anyone’s game selection, let alone John Farrar’s! 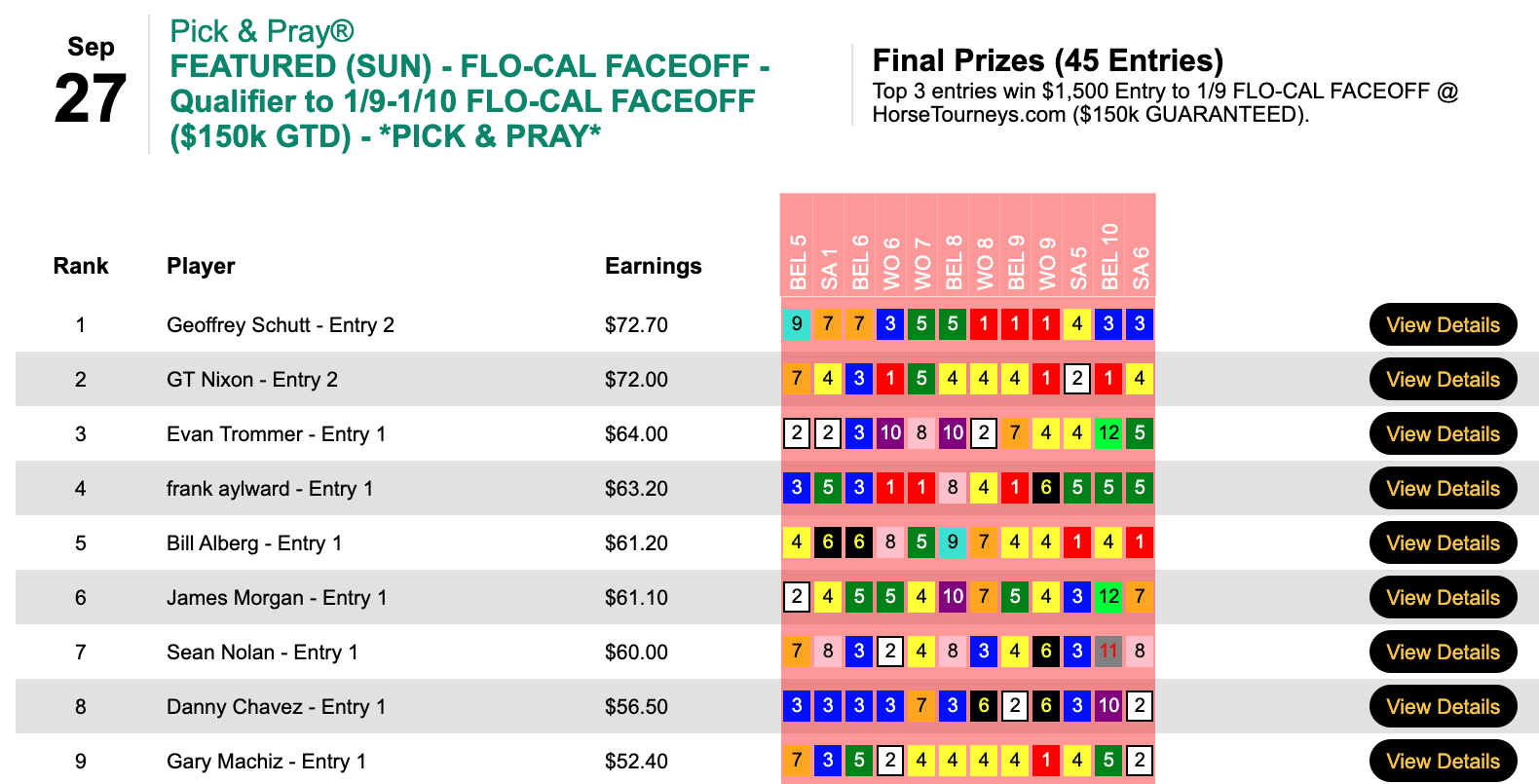 Trommer was one of three to earn $1,500 Flo-Cal Faceoff entries on Sunday, along with the two players who bested him—Geoffrey Schutt (4 wins, 0 places) and G.T. Nixon (3W, 1P).

We’re now less than two weeks out from the Keeneland Fall BCBC/NHC Online Challenge. (My fingers request combat pay every time I type that lengthy contest title.) Three more players added their names on Sunday to the roster of “KFBNOC” participants.

James Politano also felt that the opportunity to play Il Malocchio was an offer he couldn’t refuse.

Politano knew what was good for him in this Low Ratio game. Il Malocchi was his biggest earner among 2 firsts and 3 seconds, and now Politano’s a made man…at least where the NHC is concerned. 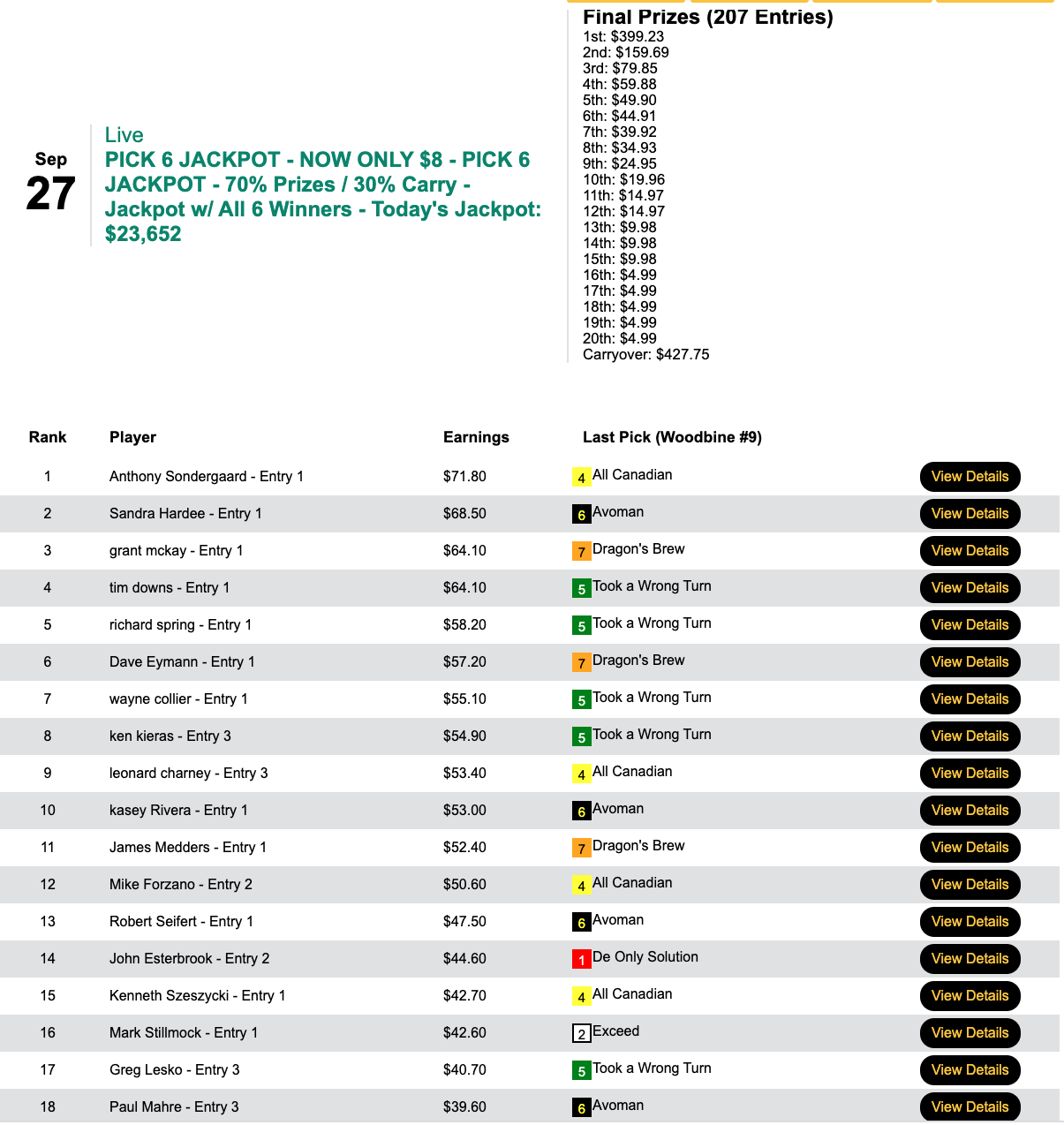 Highly notable in defeat were Grant McKay and Tim Downs. They were perfect through four races that included three winning non-favorites. Then they were both fighting mad when Fighting Mad could only manage 3rd at odds of 2-5 in the 4-horse race 4 at Santa Anita. Next Saturday’s $8 Pick 6 Jackpot will start out with a carryover of $24,079 awaiting anyone (or ones) who can go 6-for-6.

…and Russell Weber (3 wins, 2 places) and Kenny Livengood (2W, 1P) did the best of those who did. Vegas ho! Livengood, incidentally, was in last place through the first seven races with a total of $0.00. Yet another reminder to never give up the ship!

Kevin Newell couldn’t connect with anything higher than 6-1 on Sunday.

However, he had 3 wins and 5 placed, and he really appreciated having Appreciated in the final contest race. The place payoff of $5.20 for Appreciated’s 2nd-place finish made the difference in Newell’s $2.10 victory in Sunday’s Low Ratio Breeders’ Cup Betting Challenge qualifier.

Pimlico seems to have a really good card lined up for Saturday, so it should be an exciting day around here. Have a good week ahead, and we’ll start ramping up the featured-tourney fun (including Flo-Cal and Keeneland qualifiers) on Wednesday.