Tracking all of the featured tourneys during Labor Day week was pretty…labor intensive…with 29 such events taking place from Wednesday through Monday. For many of our players, however, handicapping was a labor of love last week—and a rewarding one at that.

Igor Mirambeau was rewarded with $1,589 after coming up with 4 wins and 2 places in Wednesday’s $2,000 Guaranteed game, which closed with a purse of $3,179. Mirambeau particularly loved his handicapping in the final three tourney races. He won them all, including with Mirror Mirror ($15.40, $9.20) in the 12th at Parx.

James Connors missed out on Mirror Mirror, but that doesn’t mean that he blew that last race.

Au contraire, Connors (3 wins, 3 places) caught an $11.80 place payoff in that Bensalem, Pennsylvania finale with Gray Little Meadow, and that made the difference in him winning a $3,000 entry to the October 10 Keeneland BCBC/NHC Online Challenge. 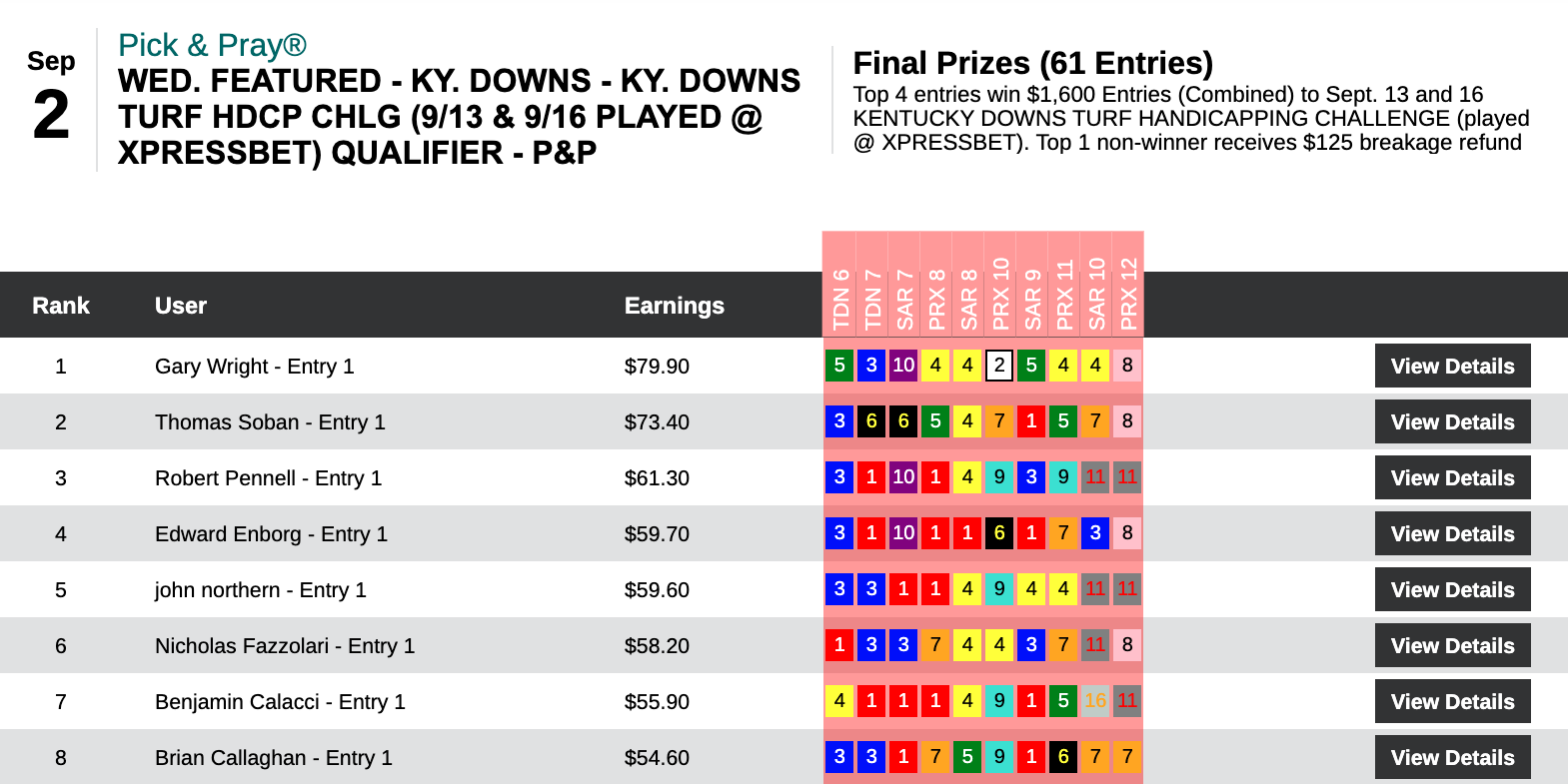 Robert Pennell couldn’t see himself picking Mirror Mirror but he also won $1,600 in entry fees for finishing third. Edward Enborg did see the merits of Mirror Mirror and grabbed the fourth position—which was also good for a Kentucky Downs berth in this four-seater.

All together last week, 16 people here earned their entry fees to the two Kentucky Downs competitions—including three on Friday.

Lawrence Kahlden, Nick “48 hrs.” Noce and Sean O’Malley will be rooting for good luck—and fair starts—on September 13th and 16th thanks to their performance in last Friday’s Kentucky Downs qualifier. All three had Saratoga 9th race longshot Big Package ($48.80, $24.20) in their scoring portfolio.

Craig “Home Sweet” Hom also had Big Package…and that meant another big cash-game win for him. 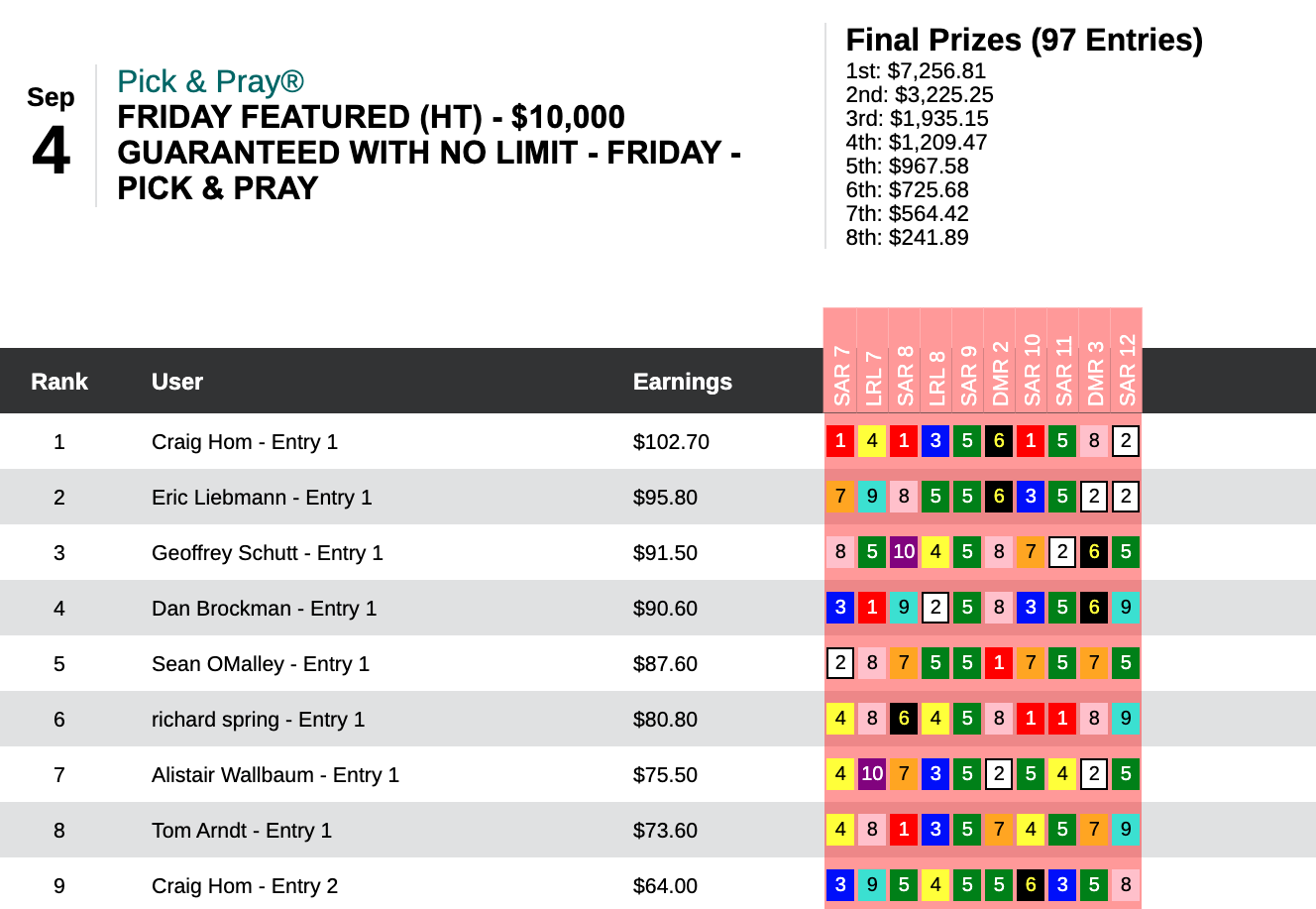 Josh Thorpe and Carolyn Stovall were the big winners in Friday’s $75 NHC qualifier at HorsePlayers.

It was Big Package that helped Frederick Reynolds wrap up a nice triumph.

The Spa 23-1 shot topped 3 wins and 2 places that helped Reynolds preserve a heavy-duty $10,000 entry to the Breeders’ Cup Betting Challenge.

Saturday was the day that Evan Trommer picked this week to record his obligatory featured-tourney victory.

Saturday’s $10,000 Guaranteed Big Bucks game was Trommer’s sixth marquee-game triumph over the last five weeks. (I guess he grew tired of winning BCBC entries!) This one was worth $8,549 from a final purse of $12,213.

Saturday’s other big-money cash tourney was captured by Lynn Ray. 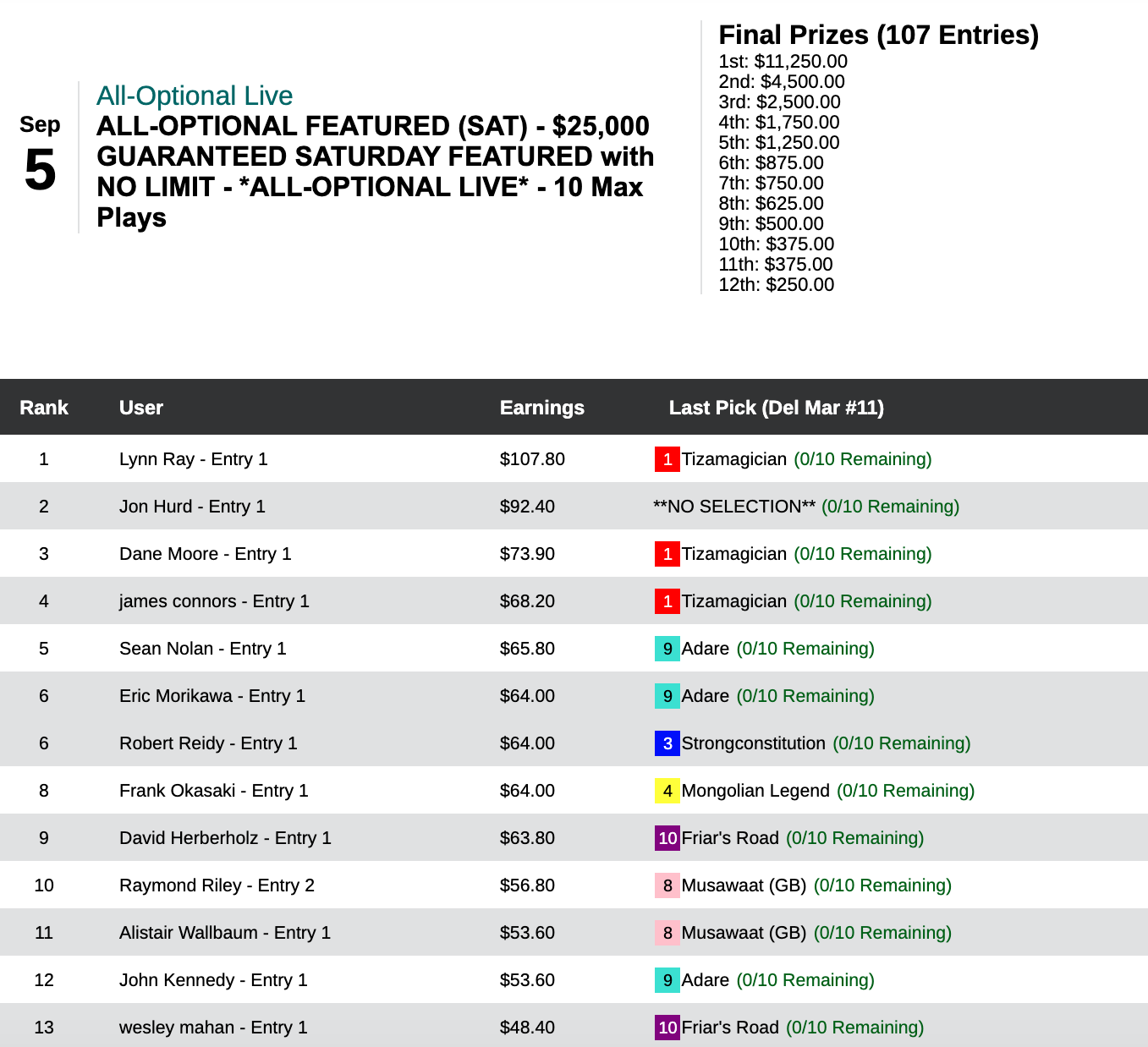 The other “Pick 10-out-of-25” All Optional Live tourney on Saturday was the 2-seats-guaranteed NHC qualifier.

Fivestar Lynch was Groffie’s only winner on the day, but that hit was preceded by five important placings, and that allowed Groffie to reach his goal of securing a spot (one of no more than 57) to the September 19-20 The BIG One right here at HorseTourneys. 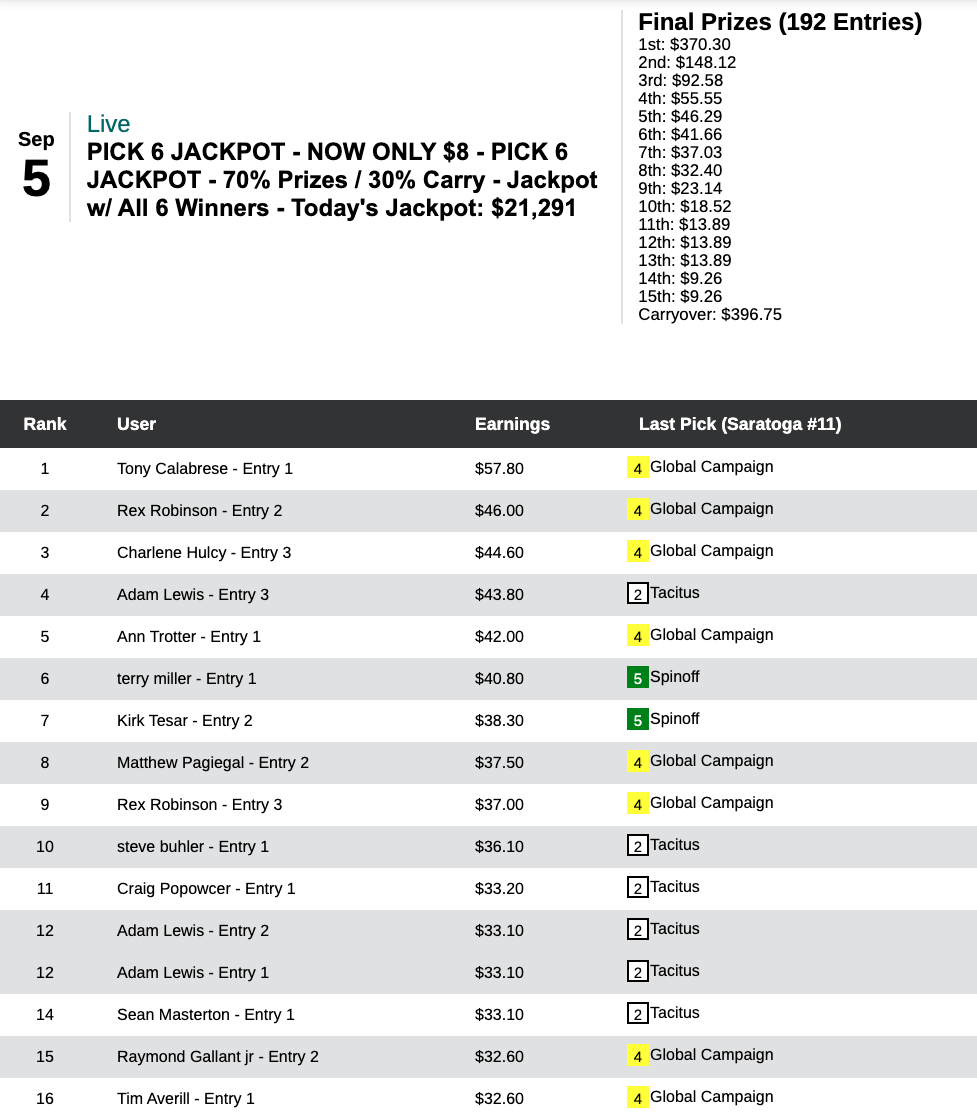 Fourth-place finisher Adam Lewis was the only one to get through three races without a blemish on his record, but since no one went 6-for-6, it left a Jackpot of $21,687 heading into Sunday.

And no one went 6-for-6 on Sunday either.

Nevertheless, Indiana’s Kirk Tesar put forth an interesting and effective effort. He ran both first and second, and his “bad” entry (2 winners) outdid his “good” entry” (3 winners) after place payoffs were factored in. Both entries contained 20-1 Saratoga winner Battle Station in the last leg. Since no one swept the Sunday six, next Saturday’s Jackpot will start out at $22,003.

Doodnauth’s score of $99.20 was the highest posted in any of the day’s featured 12-race games. 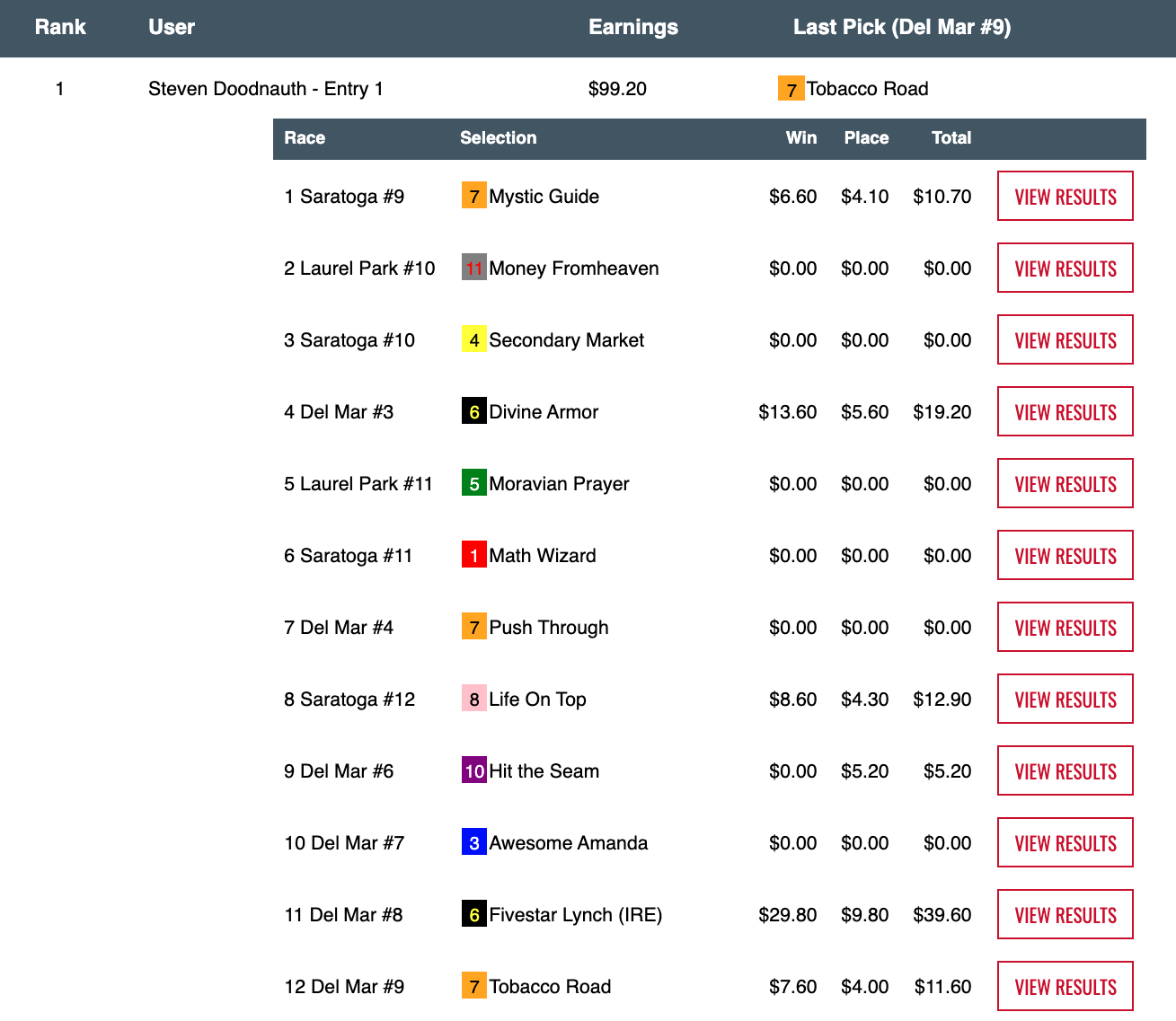 On Monday, Paul Cush again used an unspectacular but steady (and effective) method to nail down a victory in the day’s Keeneland BCBC/NHC Online Challenge qualifier.

So between Saturday and Monday, Cush won two events. Sean Nolan won two as well—both on Sunday. They were really good ones too.

Then (or…actually…at the same time) Nolan annexed the Sunday qualifier to The BIG One.

Here Nolan added a $10.60 place payoff to his three double-digit-odds winners to land a spot in the September 19-20 “high expectation” tourney.

Another Sunday “AOL” game was our $7,500 Guaranteed Big Bucks tourney. It proved to be no contest. 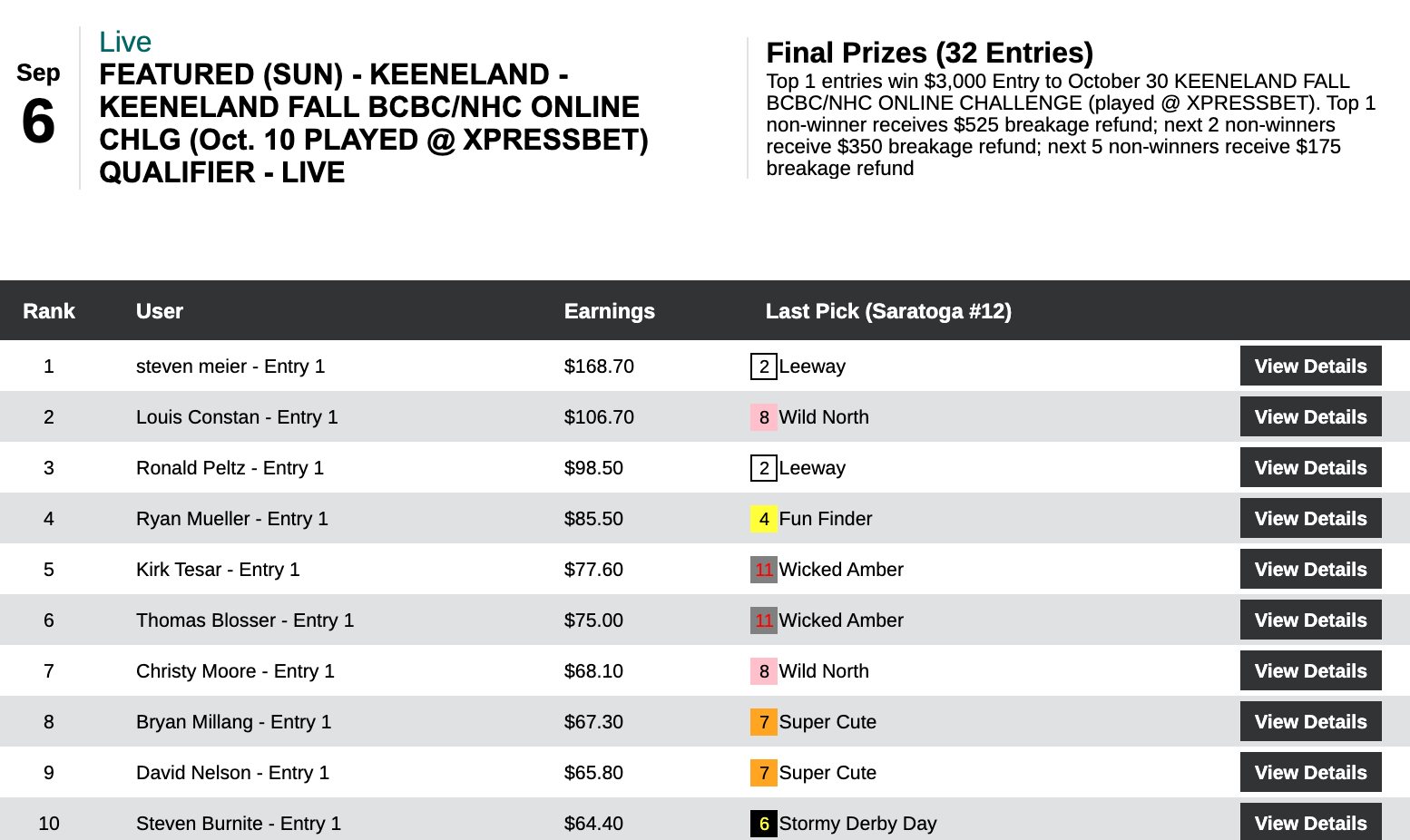 Another four players on Sunday punched their respective tickets (a $1,600 value) for the Kentucky Downs Turf Handicapping Challenge on September 13 and 16.

Congratulations to Mark Feld, Robert Peltz, Robert Swickard and Mike Elsass. They’ll be doping out the Franklin, Ky., races those two days, plus the grass races from Monmouth on Sunday the 13th (those Jersey grass races are also part of the all-turf competition).

Our $1,000 Guaranteed Exacta tourney (with a $125 buy-in) attracted only 8 entries on Sunday…which meant that the event went off at no takeout to players (and at a loss to HorseTourneys after track fees and credit card deposit fees are factored in).

The biggest beneficiary of the lack of vigorish was Chip Sarna, who had two winning $1 exacta boxes—one worth $5.90 and the other paying $70.30 (in the 9th at Monmouth).

Moving on to Monday, the high scorer of the day has the dual distinction of also being our first qualifier to next January’s Flo-Cal Faceoff.

That’s Toronto’s Sheldon Usprech, shown above hoisting the winner’s hardware (glassware?) after taking an event at Woodbine. Usprech won a $1,500 Flo-Cal entry along with the next four finishers Sam “Hear Me” Raur, Charley Witt, Josh Thorpe (winner of an NHC seat on Friday) and NHC Hall of Famer (and first-ever Spa-Surf Showdown winner) Paul Shurman.

The above quintet are now assured of a spot in the field of the full-card Gulfstream/Santa Anita contest on January 9-10 that will serve as the first leg of the newly announced 2021 Tourney Triple series offering a bonus of $2 million for a series sweep—and $1 million for taking two of the three legs.

There were also five winners in Monday’s qualifier to the Kentucky Downs Turf Handicapping Challenge that gets started this Sunday. 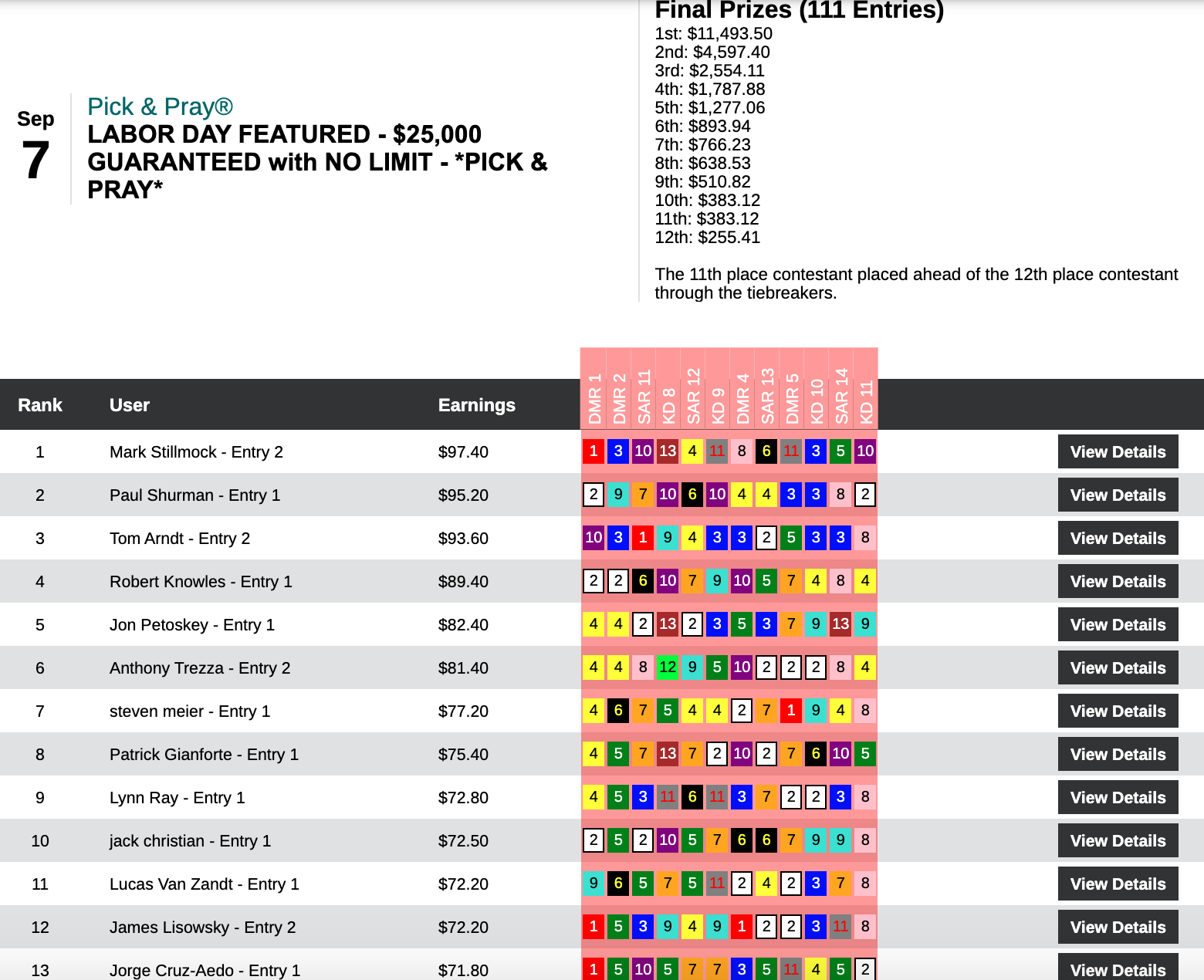 Add ‘em all up and they gave Hardy an easy win in Monday’s qualifier to The BIG One.

Over at HorsePlayers, Cheryl Knepper scored almost as high as Sheldon Usprech did at HorseTourneys.

There were only 15 in the NHC Low Ratio game but Jeff Van Drie put up a score worthy of a much larger gathering.

Van Drie had 2 firsts and 3 seconds to punch his ticket to Vegas.

Last but not least, Monday’s Breeders’ Cup Betting Challenge Low Ratio qualifier at HorsePlayers was won by the two players able to break $100.

…and Steve “The Admiral” Nemetz.

The Admiral had smoother sailing than might have been expected given that this 1-per-23 event drew 43 entries…but we tossed in a second $10,000 rather than pay out a partial ($5,000) entry plus breakage. Whenever we can, we try to decide the close calls in favor of the player.

We hope the close calls go your way in the week ahead. The featured-tourney slate begins anew tomorrow. Good luck…and thank you for your part in helping us have a fun Labor Day weekend.