It was a chalkier week than most—especially on Friday, Saturday and Sunday. And yet a lot of familiar names were on last week’s roster of winners, demonstrating the versatility and adaptability of their games. Not only that, but the names of several (Jim Lisowsky, Mike Yurczyk and Jack Schwartz, to name three) appeared at the top on more than one day. The featured-tourney fun got started on Wednesday.

Bob Engelhard is a player to fear anytime you see him turn up in a game you’re in. Engelhard. He’ll be turning up at the NHC thanks to 4 wins and a place in Wednesday’s $75 qualifier. In what was perhaps some foreshadowing for the week ahead, Engelhard got into the top spot because he picked 7-5 winner Battle Station in the contest finale from Delaware.

Here, Engelhard was topped only by Josh Thorpe (4 wins, 2 places). But the Pick Your Prize event is always popular—and it’s coming up quickly (July 25). So there were enough entries for four $2,000 entries to be awarded, and those went to Jerry McClenin and NHC Hall of Famer Steve Wolfson Sr. (who was kind enough to include the “Sr.” in his entry name this time around so that I could easily distinguish him from the other NHC Hall of Famer in the family!).

A player who’s been showing up in these recap blogs on a regular basis of late is Vineet “Please Don’t Squeeze the” Sharma.

Last week he captured a Spa & Surf Showdown seat and this week he opted for the more immediate gratification of instant cash. Sharma finished with 5 firsts and 1 second and he started a string of four consecutive winners with the 9th-race Gulfstream winner Sonar ($36.20, $9.20) to collect $2,246 in our $2,000 Guaranteed cash tourney, which finished up with a pot of $4,493.

The high score on Wednesday was carded by Garry Addley. 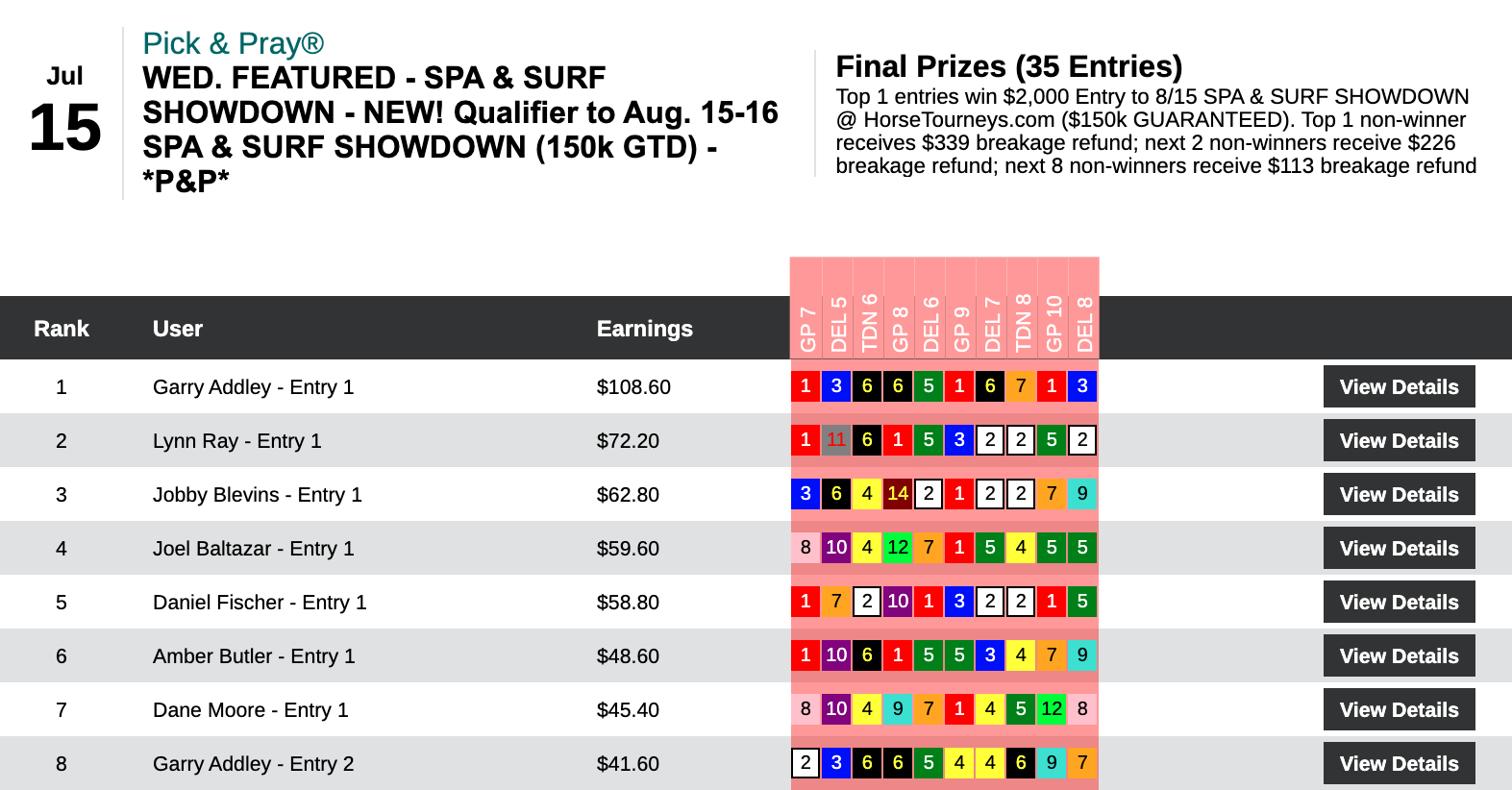 Addley went to the early lead in our Spa & Surf Showdown qualifier and improved his position from there. After hitting the first three races, Addley added another four wins and a place thereafter to draw clear by $36.40. Here’s a look at his winning Wednesday:

Speaking of the Spa & Surf Showdown, the guaranteed purse for it is now all the way up to $203,550…and that’s with still another four weeks of qualifying to go. Anthony Laurino and Jorge “Smooth” Cruz-Aedo are down for some of that action.

Thursday was opening day at Saratoga, and we offered four Saratoga-only features, including a Spa & Surf Showdown qualifier that was accounted for by Laurino and Cruz-Aedo. If there was a day last week that was fertile with featured-tourney prices, it was probably Thursday (when we were focusing on just one track). Laurino’s 2 firsts and 3 seconds were topped by Michael Trombetta-trained firster Escape Fund ($71.00, $25.40) in the 3rd, while Cruz-Aedo’s 3 wins and a runner up were led by Dayoutoftheoffice ($41.60, $14.60) in the 8th.

O’Malley missed on 3rd-race cap horse Escape Fund, but he still registered the day’s highest score thanks to his three other tallies. 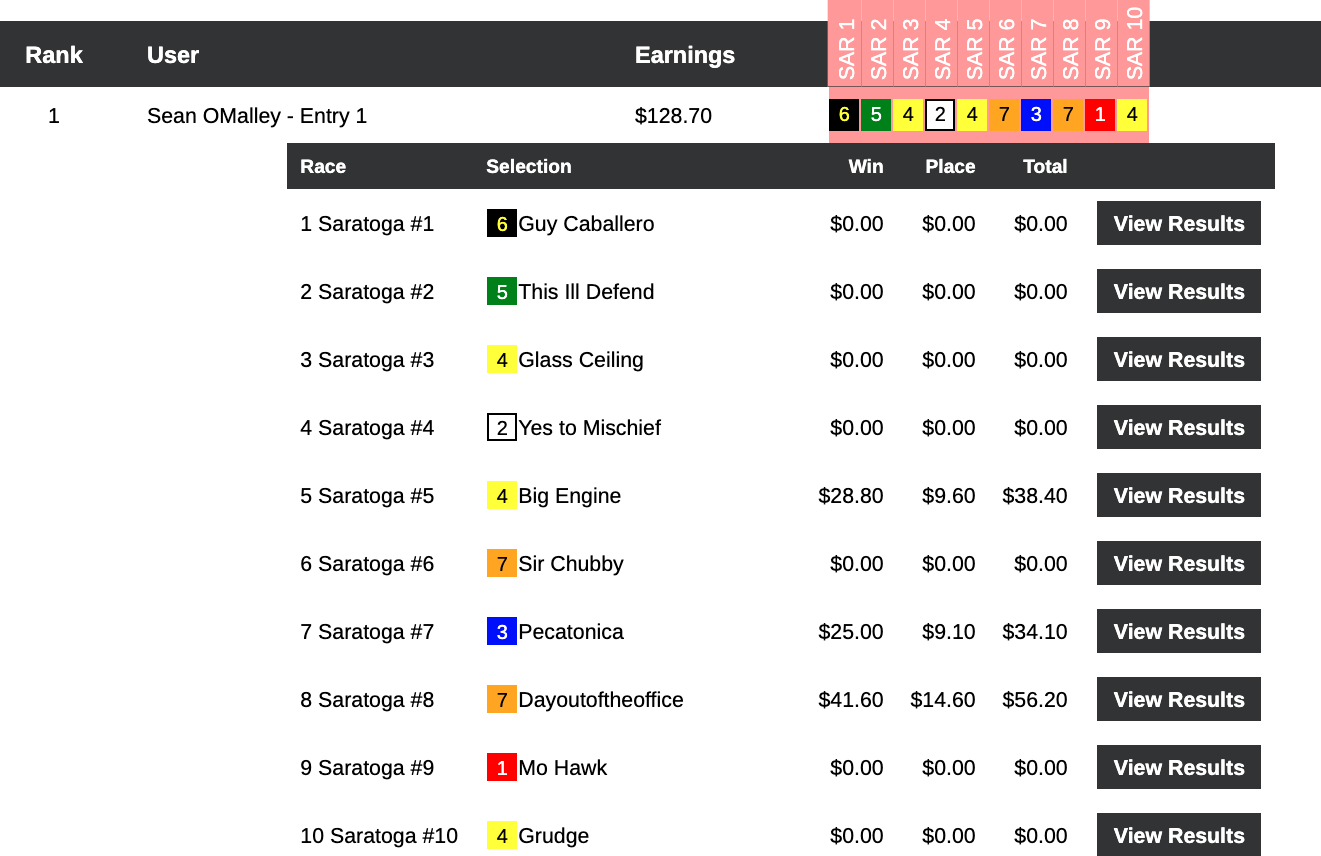 We also ran a separate, $2,000 Guaranteed live-format tourney on the opening-day Spa card.

Dayoutoftheoffice was key here for Mike Yurczyk, who grabbed the winner’s share of $1,023 with his three wins and a place.

We now join the chalky portion of our programming.

Mike Sylvester won a $10,000 Breeders’ Cup Betting Challenge entry in Friday’s Low Ratio qualifier at HorsePlayers with a score of just $49.90—and THAT required some fancy shootin’ at the end.

Don Beardsworth, who has been around the NHC since the very beginning, will be part of the big dance again in 2021.

His score of $81.60, built on 5 wins and 2 places in this $75 qualifier, represented the other end of the Friday scoring spectrum. It was the day’s highest. Jimmie O’Nail (4 wins, 2 places) had 6-5 victor Peaceful Feeling in the final race, the 4th at Monmouth, to squeak into 2nd and grab the other “Bally’s Berth.”

All the winning scores on Friday here at HorseTourneys went no higher than the 60s.

Vince LaRocco cashed a place ticket for $4.60 in that Monmouth race 4 to claw his way to the top in Friday’s Spa & Surf Showdown qualifier. Also earning a $2,000 entry was runner up Raymond Riley (4W, 4P).

There was a quartet of winners in Friday’s Monmouth Pick Your Prize qualifier.

Gary “Macho Man” Machiz’s triumph by $9.60 was a fairly wide margin for this day. Look at the tightness behind him. Emerging victorious in the multiple horse photo for the other three $2,000 entries were Michael Stiscak, Gary Lee Russell and Truls Engelbretsen. 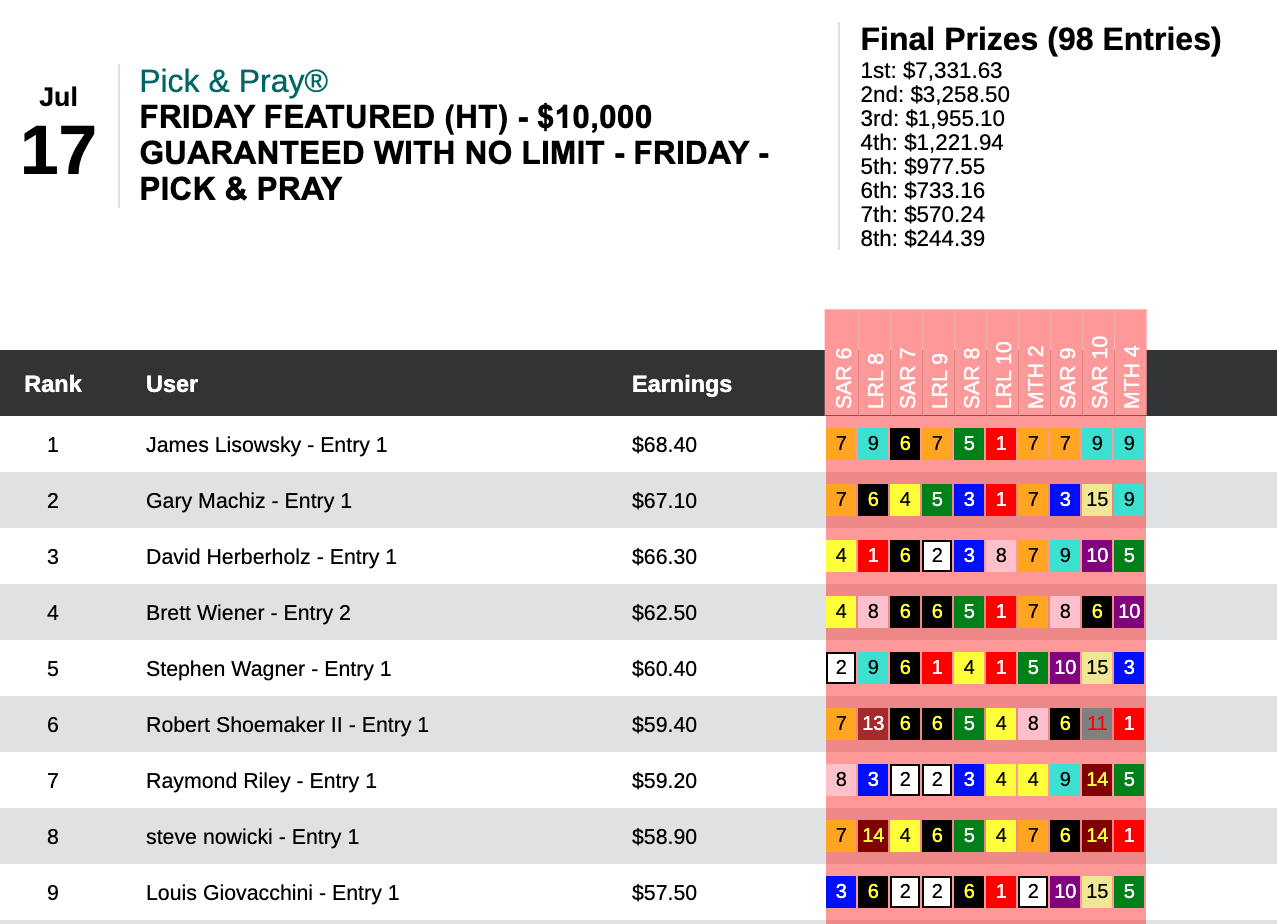 At this point, we’re going to jump ahead a couple of days because Lisowsky wasn’t done collecting big-money purses.

Lisowsky used the exact same 10 picks in this All Optional Live game that he used in the Big Bucks contest.

“On Saturday, I played multiple tourneys and got distracted,” Lisowsky admitted. “I found myself splitting my best picks and not capitalizing by keeping them together…and I whiffed. On Sunday, I was determined to stick to my original picks unless something put me dramatically behind…but as it were, that didn’t happen…it was formful. These were ALL my selections from 2 hours before post time. I never changed any as it turned out.”

So, effectively (in more than one sense of the word), Lisowsky treated this 10-plays-from-25 races, All Optional Live game as a Pick & Pray. Of course, Lisowsky has never been averse to somewhat atypical entry strategies.

He has been known to play identical entries twice within certain qualifying tournaments. That is not too outlandish. Others do that too, hoping to win two seats to a given event. However, Lisowsky has done it in one-seat qualifiers too.

The, just a few weeks ago, the serious-minded handicapper raised an eyebrow or two by playing an entry with the #3 horse picked in every race.

“I had a contractor at my house and forgot that I had entered, and it took second priority so I just filled them in,” he said sheepishly. I’ve seen others do that. It doesn’t work for me, however!”

Big-money cash games on the other hand—those seem to work just fine for Jim Lisowsky.

Okay, back to Saturday’s action. You know by now that this was an All Optional Live weekend. One of two such games on Saturday was the $25,000 cash tourney.

Just seven days after his wife Karen earned an NHC seat, Mark Richards picked up some gambling money for their trip to Bally’s.

Richards only had 2 firsts and a second, but the place horse was a maximum $22.00 collection, one of the winners was a 10-1 shot, and the other was Lights Down Low in an $8,000 claimer—race 6 at Monmouth—that was not part of our regular 12-race featured schedule. Lights Down Low won and returned $103.60 to win and $31.40 to place. Obviously that was trimmed down to $42.00 and $22.00 for contest purposes…but this is why some people enjoy the All Optional Live format. You get to play races that we otherwise wouldn’t include.

The other Saturday “AOL” game was our Spa & Surf Showdown qualifier. 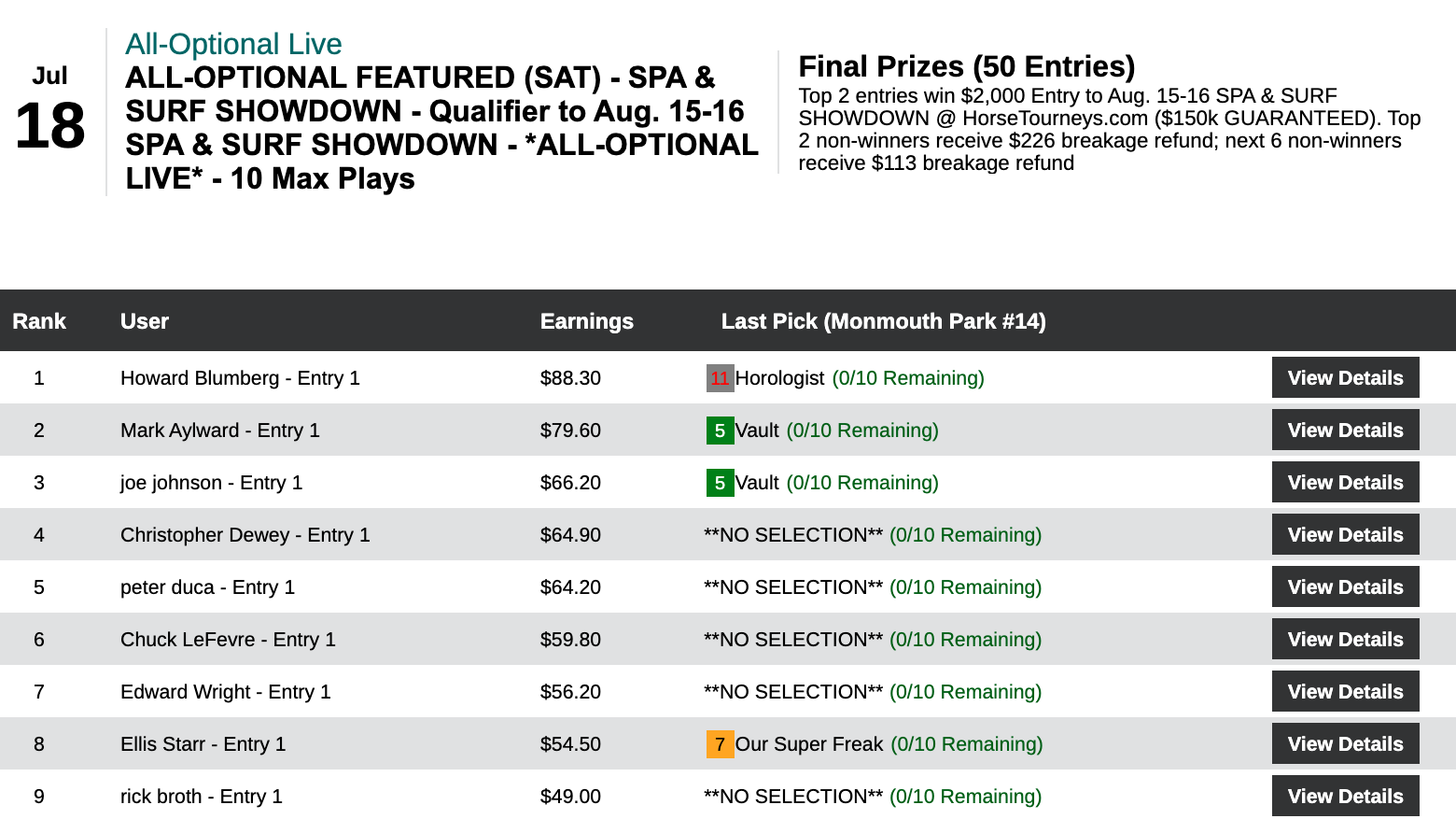 Congratulations to Howard Blumberg and Mark Aylward—both of whom will march on to the now-$203,550 tourney on August 15-16 with paid up entries in their pocket.

Next up, a regular feature in our weekly recaps—The Dylan Donnelly Report. 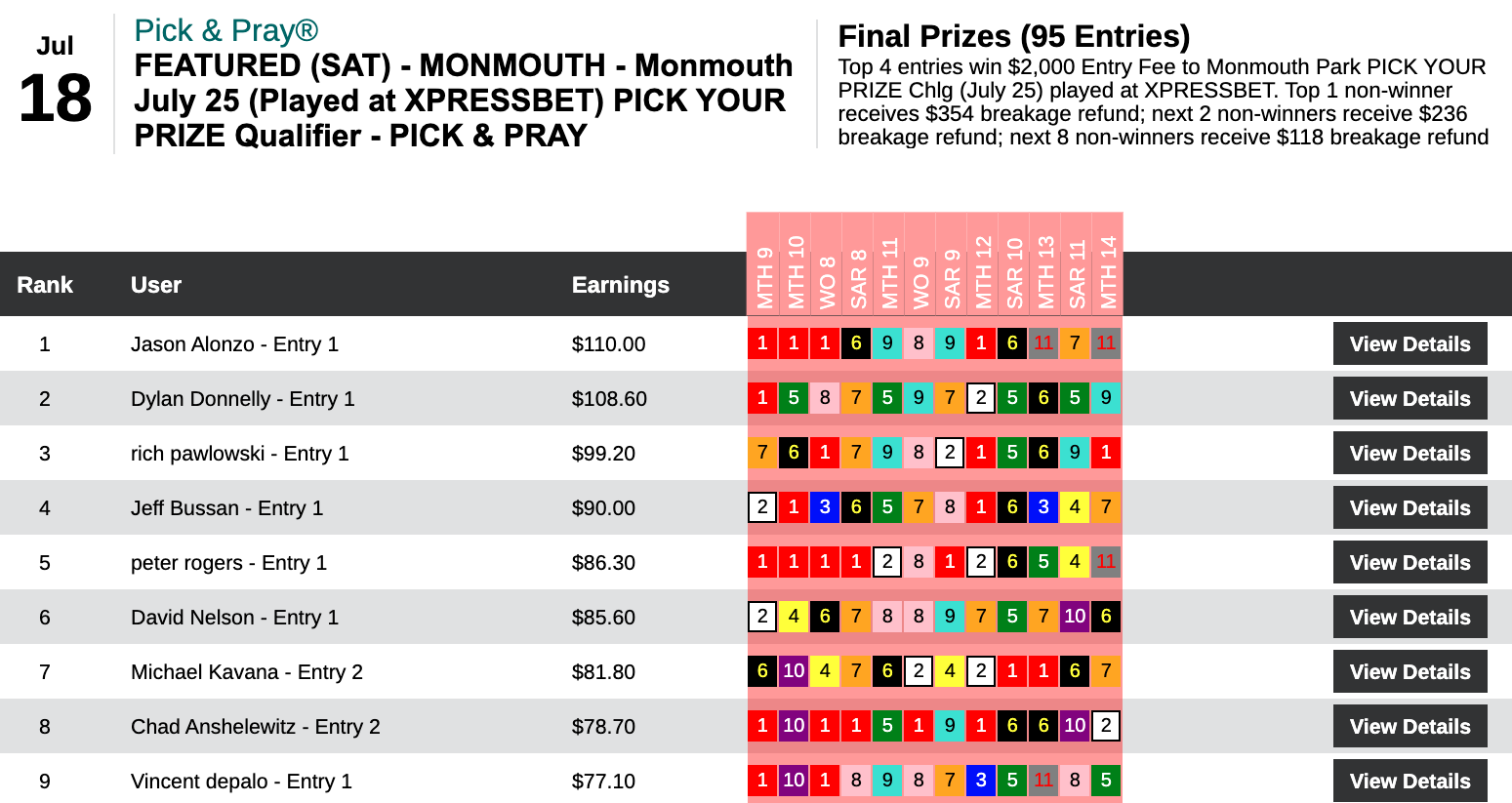 For the rest of this week’s The Dylan Donnelly Report, we send you over to HorsePlayers. 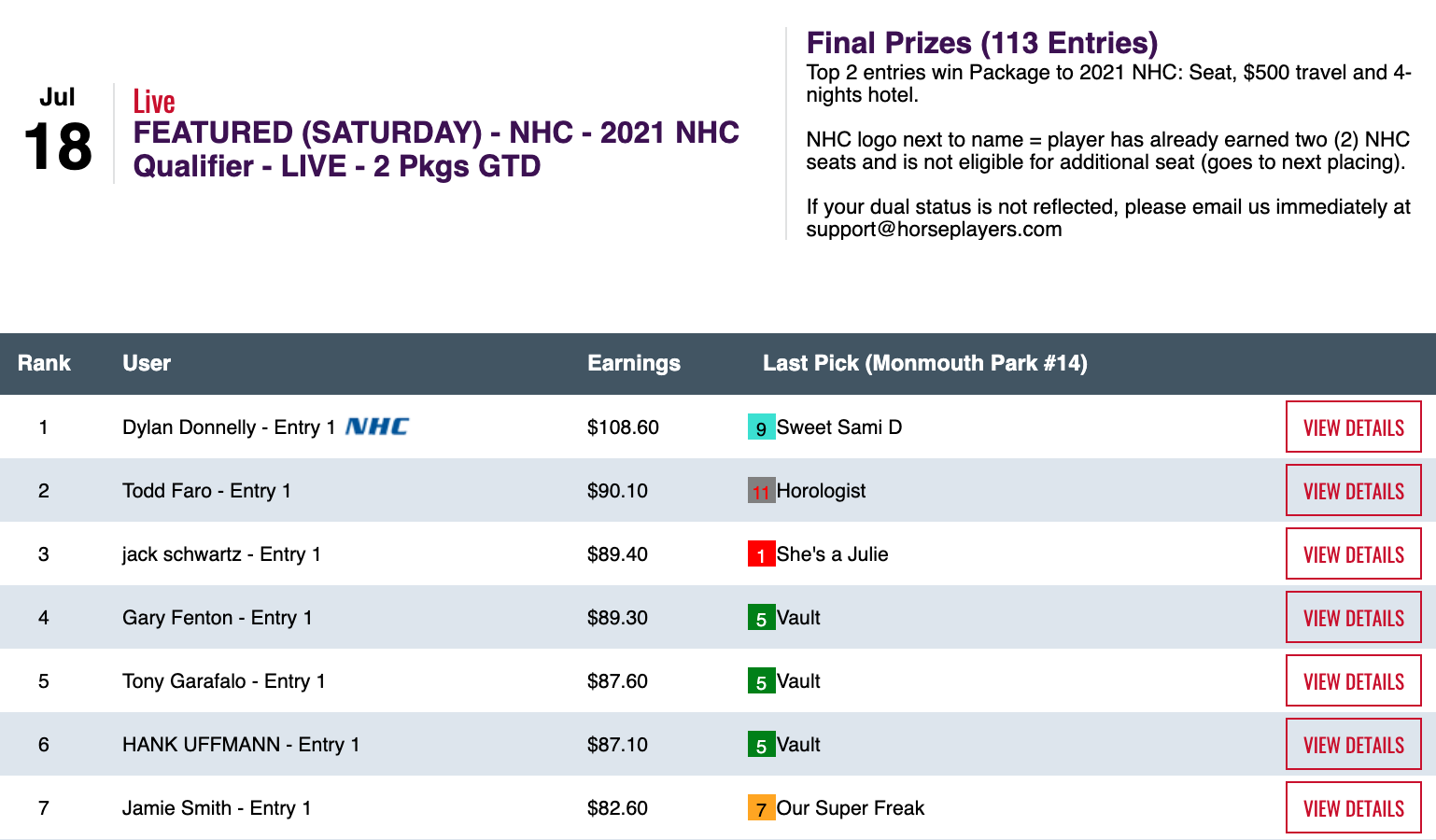 He’s already double qualified to the NHC, but Donnelly played in and won this qualifier too. The available seats went to the second- and third-place finishers, Todd Fero (who got up thanks to having the 7-2 Horologist in the last race of the day at Monmouth) and Jack Schwartz, who held the show spot by one thin dime.

Last but far from least was Donnelly’s performance in the “regular” Breeders’ Cup Betting Challenge qualifier at HorsePlayers.

Donnelly decided to quit fooling around in this one and stepped up his score to a best-of-day $129.60. We’ll spare you having to look at Donnelly’s crummy tickets, but here’s a peek at his “good entry” on the day:

For the first time in three Saturdays, the Super Low Ratio BCBC qualifier winner had a lower score (as one would expect) than the winner of the “regular” qualifier.

This one was a tight, defensive-minded struggle. Kyle Levy was the one who emerged with the sought-after $10,000 entry. His big blow among 3 firsts and 1 second was landed by Shalako in that 8th at Saratoga.

Back here at HorseTourneys on Saturday, Mike Yurczyk wisely reinvested some of his earnings from his Thursday triumph in the $2,047 cash game.

Like Dylan Donnelly, Yurczyk throughly enjoyed the magical five minutes provided by Shalako and Aquaphobia. In this case, the return for Yurczyk was a paid-up berth (one of only 57 available) in The BIG One this September.

For the first time, we held a Saturday $8 Pick 6 Jackpot tourney.

John Walters won it with just a pair on “on-toppers”. That led to a $15,962 Jackpot carryover on Sunday when Steven Meier took top honors with three winners. Interestingly, Meier had the three longest priced winners ($11.40, $11.60, $9.00) but not the three shorter-priced ones. Next Saturday’s Jackpot carryover, since no one got all six correct, will be $16,315.

Sunday’s features were also a mix of 12-race and All Optional Live tourneys. We covered Jim Lisowsky’s dual Sunday wins earlier. Another “AOL” win was accounted for by Shad Walton.

Walton, who won a BCBC seat on July 3, pulled things out in the last race of our qualifier to The BIG One when Cash Code ($21.20, $9.60) captured the final tourney race, race 14 at Monmouth. He finished with 2 firsts and 2 seconds.

High score of the day on Sunday, $108.90, was posted by Vaughn Bair in the 12-race NHC Low Ratio qualifier.

Bair was a bear to his opponents, recording 8 wins and a place. Here is his Sunday scorecard:

Scores were considerably lower in what was our first qualifier to the August 8 Travers Challenge to be held at Xpressbet.

Kirk Tesar collected in five consecutive races (contest races 3-7) en route to a 3-win, 3-place day that garnered him the $3,000 entry for three weeks down the road.

Dalton Clark did all of his damage early on in our Sunday $1,000 Guaranteed Exacta tourney. He had three winning three-horse exacta boxes over the first four races to take the $700 top prize. They all paid between $21.00 and $35.50 for a buck, and the winning plays were made on races at Woodbine, Ellis and Woodbine. Spa, Schma.

Over at HorsePlayers, John Holmes collected in his first 4 races and in 5 of his first 6. 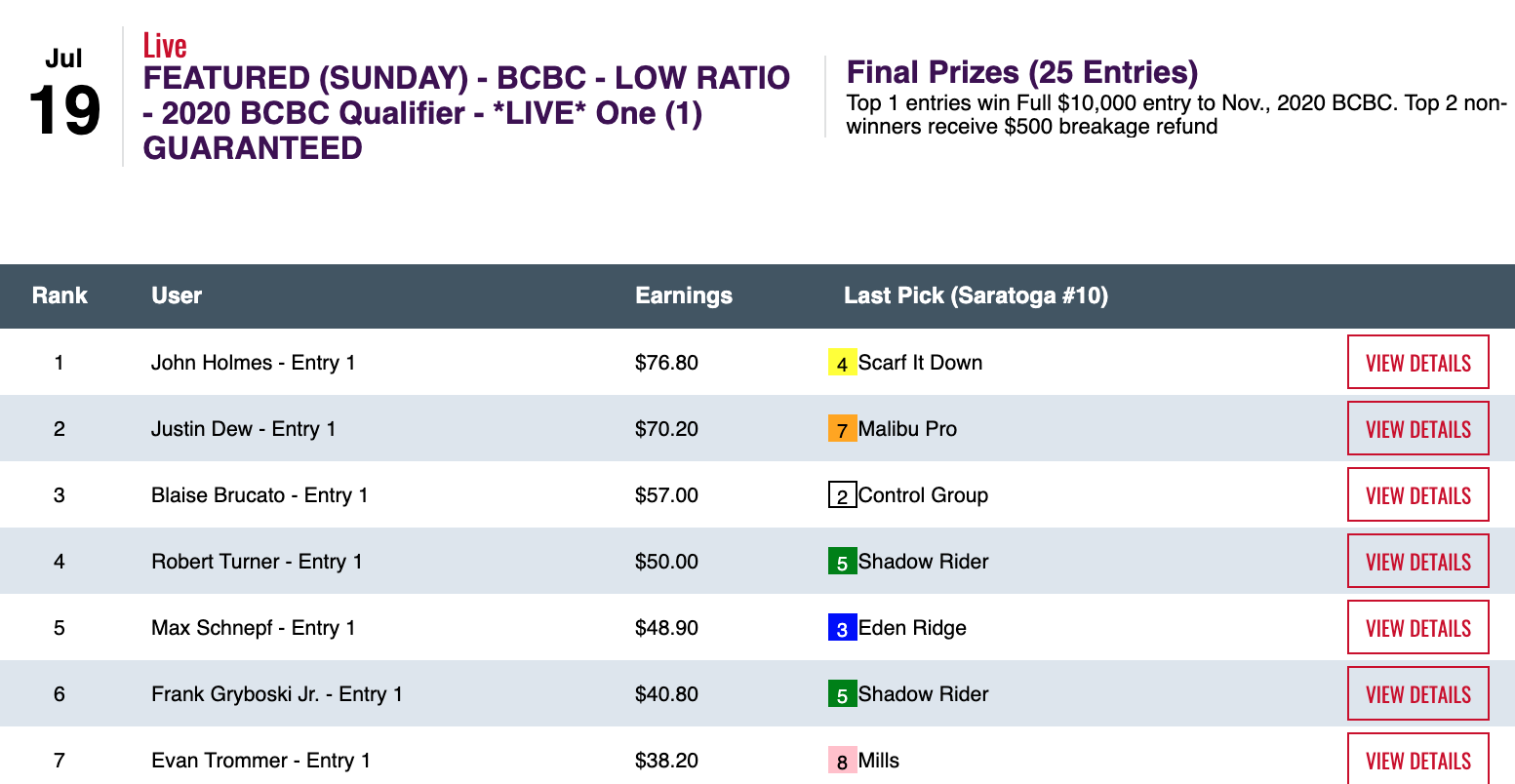 That led to a total of 5 wins and 3 places and earned him a Breeders’ Cup Betting Challenge entry in the Low Ratio qualifier.

Frederick Reynolds also got off to a very quick start.

He cashed on his first 6 plays en route to a 4-win, 5-place afternoon that earned him an NHC seat. Jack Schwartz, on the other hand, needed a late rally to get the second seat. He hit the last three races at odds of 7-2, 9-2 and 9-5 to finish with 5 wins and 2 places and get up for second.

All in all, it was quite a weekend for Schwartz. He won his first 2021 NHC seat just 24 hours earlier by finishing third to the double-qualified Dylan Donnelly and Todd Fero. He held third in that event by just 10 cents. Then on Sunday, he hits the “late Pick 3” to win seat #2.

A lot can happen in a brief amount of time around here. To paraphrase an old beer commercial, if you’ve got the time, we’ve got the tourneys. Thanks for being a part of last week’s featured-tourney action. We’ll have more lined up this week—starting on Wednesday.