I guess you could say that last week was Derby Week…even though we weren’t allowed to use the one Derby on the racing schedule. Then again, when you think about it, that’s always the case! So it was a somewhat typical Derby Week as far as HorseTourneys was concerned…which meant lots of winners and big prizes—just like always. The featured-tourney winning got under way on Wednesday. 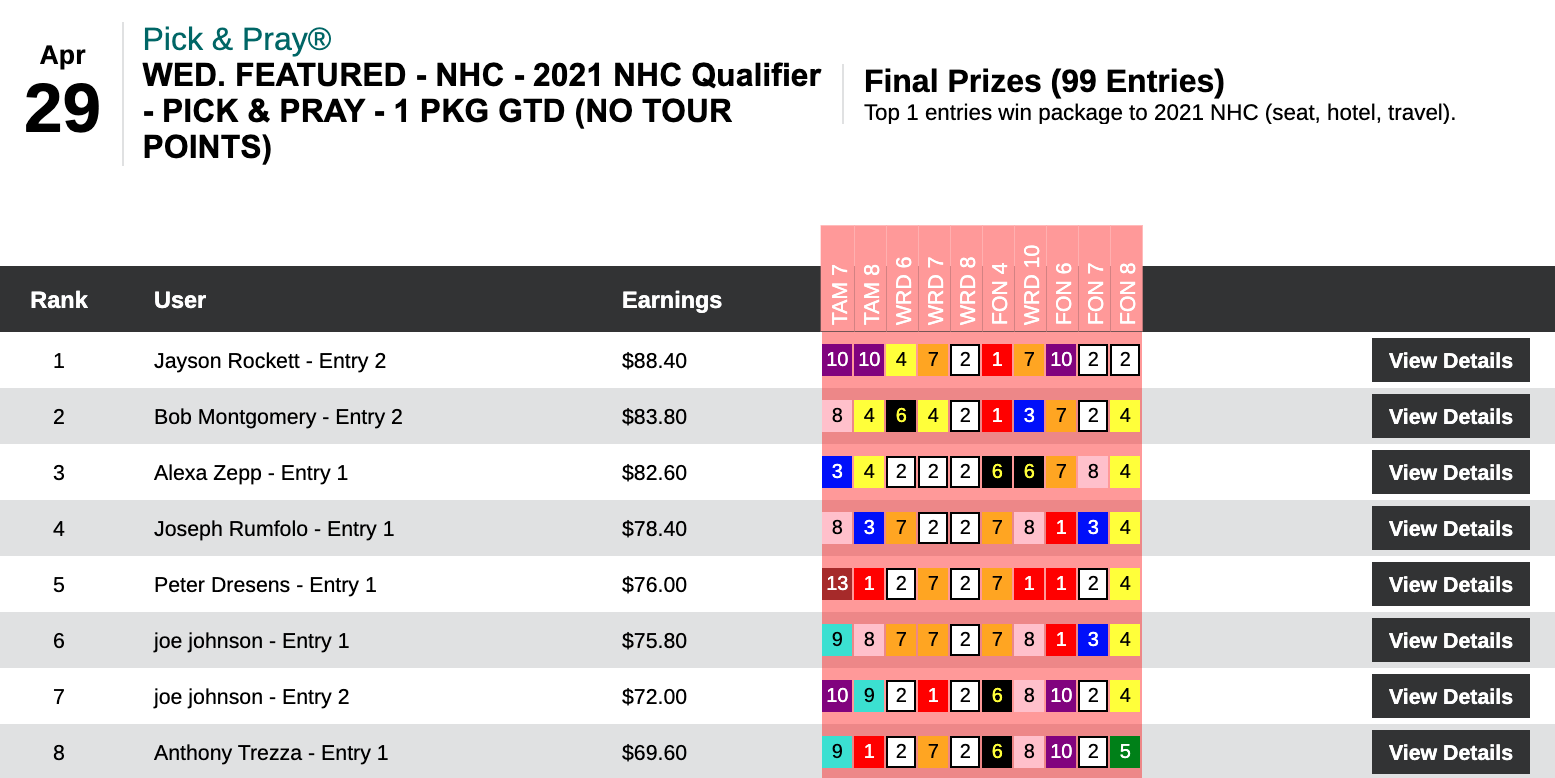 Jayson Rockett rocked Wednesday’s $75 NHC qualifier with three winners followed by two placings, and that got him the coveted Bally’s Berth. 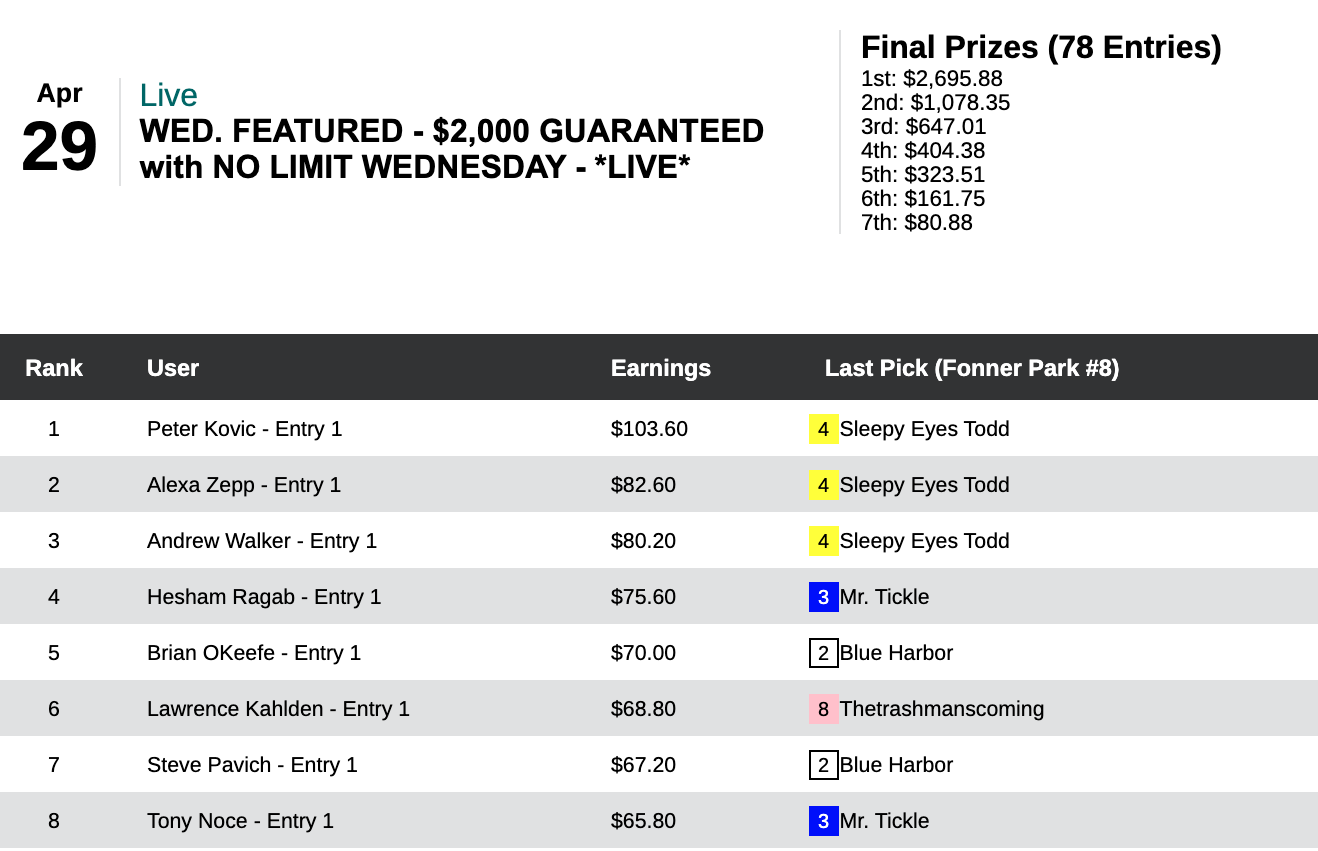 For the second time in three weeks, Wednesday was Celebration Day for Alexa Zepp.

Another hot player these days is Mark Stillmock. 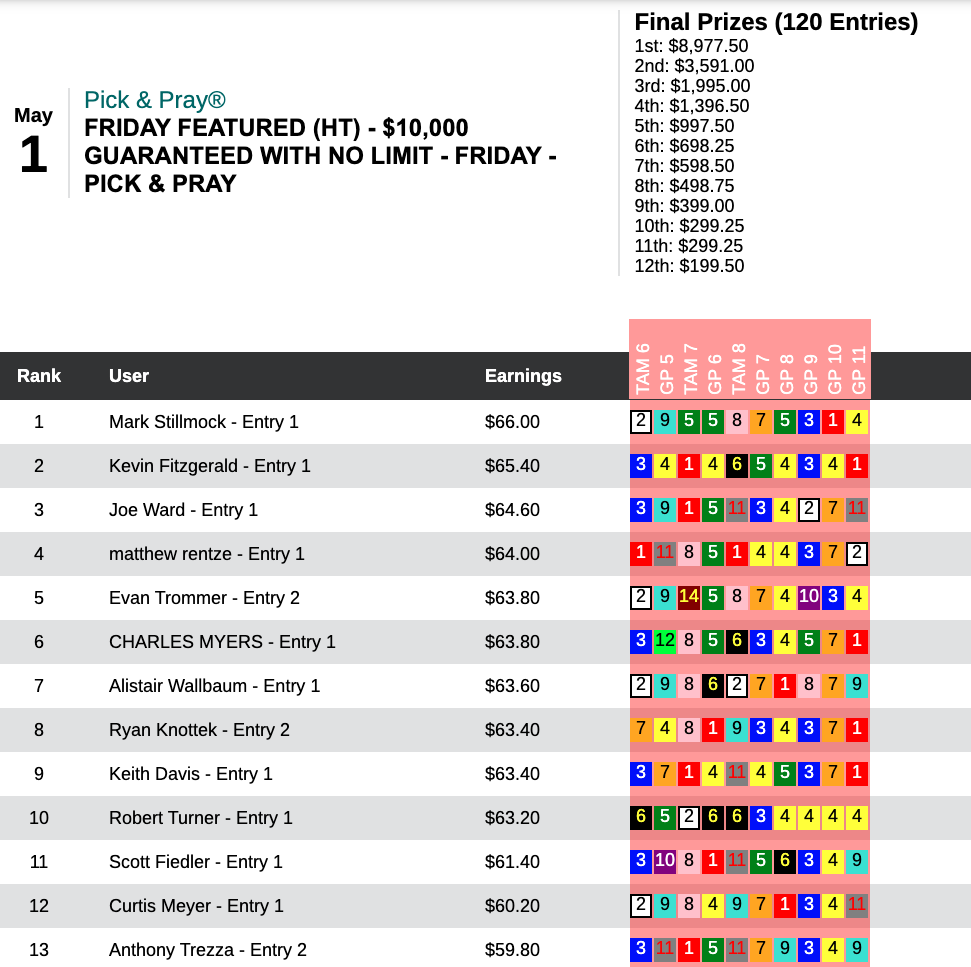 A similar score got Rick Vasquez into the winner’s circle.

His tally of $65.40—built upon 4 winners and a runner up—got him a $2,000 entry to the Spa & Surf Showdown where he will tangle with Alexa Zepp and all the other qualifiers (and buyer-inners).

Over at HorsePlayers a score in the 60s—in this case, exactly $60.00—also did the trick for Jeff Bussan.

Three wins and three places earned him a $10,000 Breeders’ Cup Betting Challenge entry (and his winning ways weren’t done for the weekend…more on that later).

The star of Friday, though, was undoubtedly the defending (as in 2019) Horse Player World Series Champ Loyal Sprague. 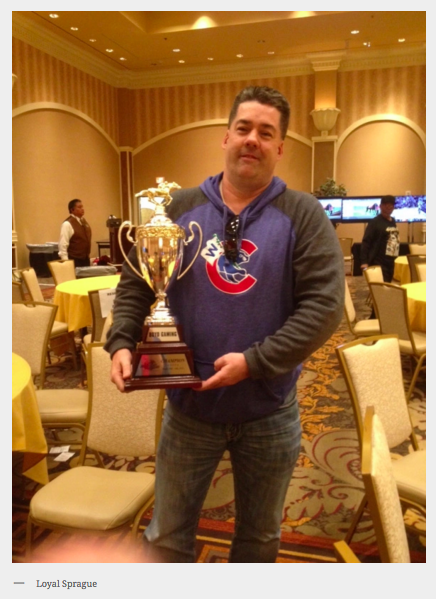 Sprague seemed to be breathing different air than everyone else on this day. By the time his scorecard had reached the 60s in Friday’s $75 NHC qualifier at HorsePlayers, he was just beginning to hit his stride. 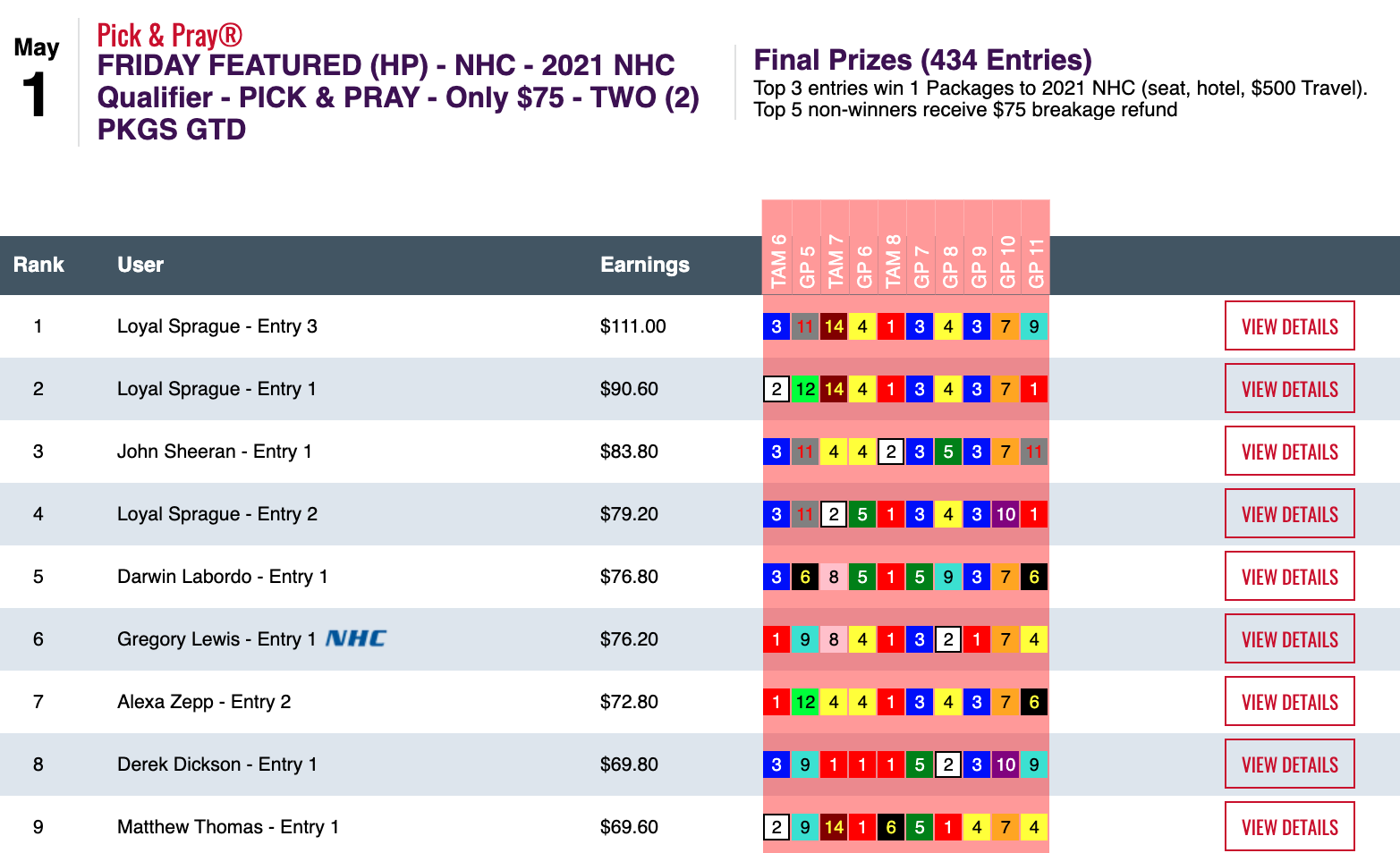 Sprague (a Las Vegas restauranteur who originally hails from Chicago) put in three entries in this one and any one of them on their own would have taken home an NHC spot. Here’s a look at his “good” ticket. 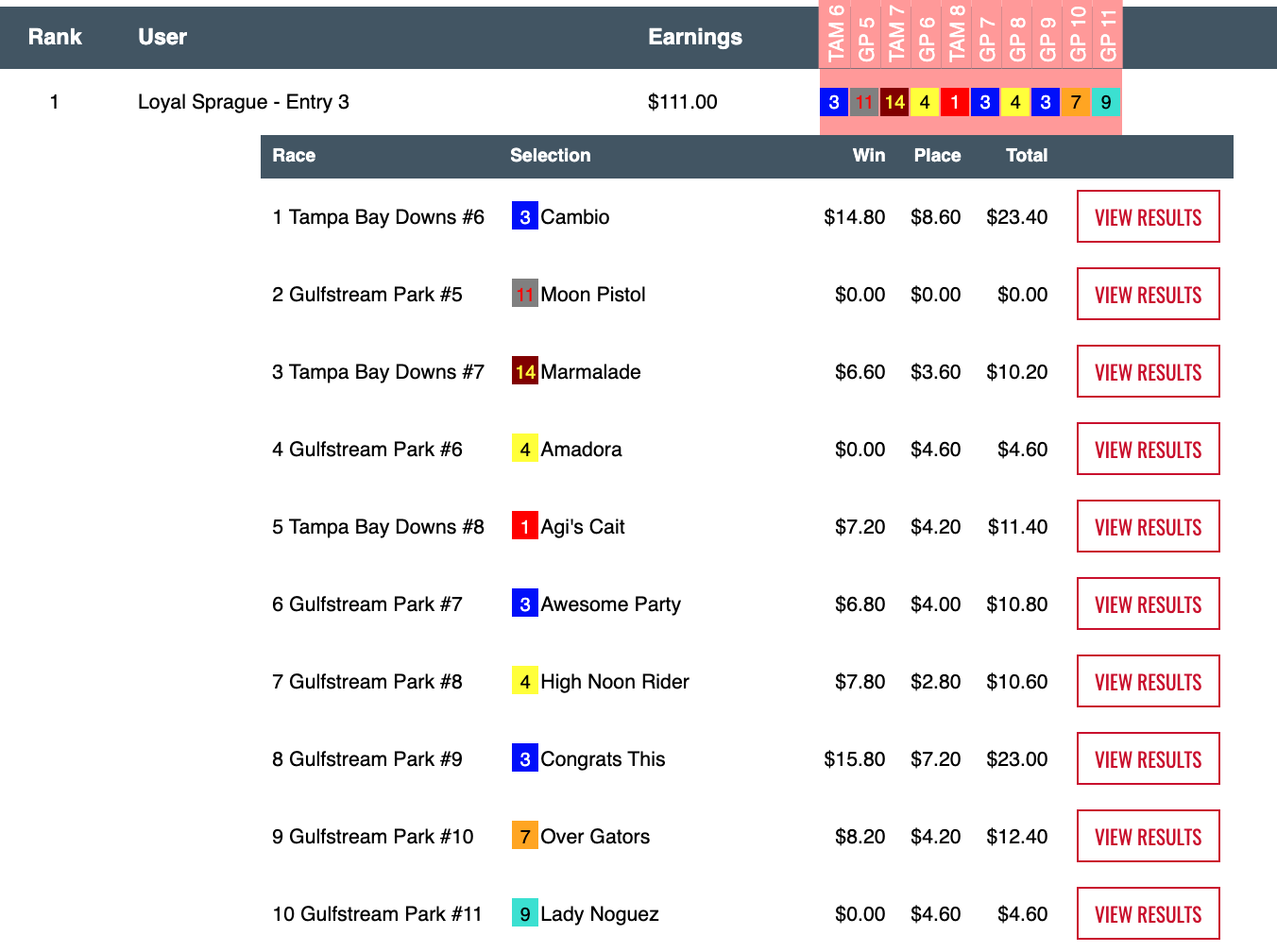 Oh to have a day when our good entry is as good as Sprague’s crummy one!

We’re not sure whether Sprague didn’t realize that NHC rules permit only one seat to be won in a given qualifier…or if he executed this three-pronged strategy on purpose. But his three entries were far from scattershot attempts. In none of the 10 races did Sprague use three different horses across his three entries. In four of the 10 races, he used the same horse on all three tickets…and those picks went four-for-four! Talk about being “on”!

While Sprague stole pretty much all the headlines here, there were, indeed, two other players to exit this competition with NHC seats: 3rd-place finisher John Sheeran and 5th-place contestant Darwin Labordo—and they both had fine days in their own right, winding up with scores that would have captured any of the day’s other three featured tourneys. Congratulations (and thanks) to Loyal, John and Darwin for putting on quite a show here!

The high scorer on Saturday also achieved the distinction by a wide margin. 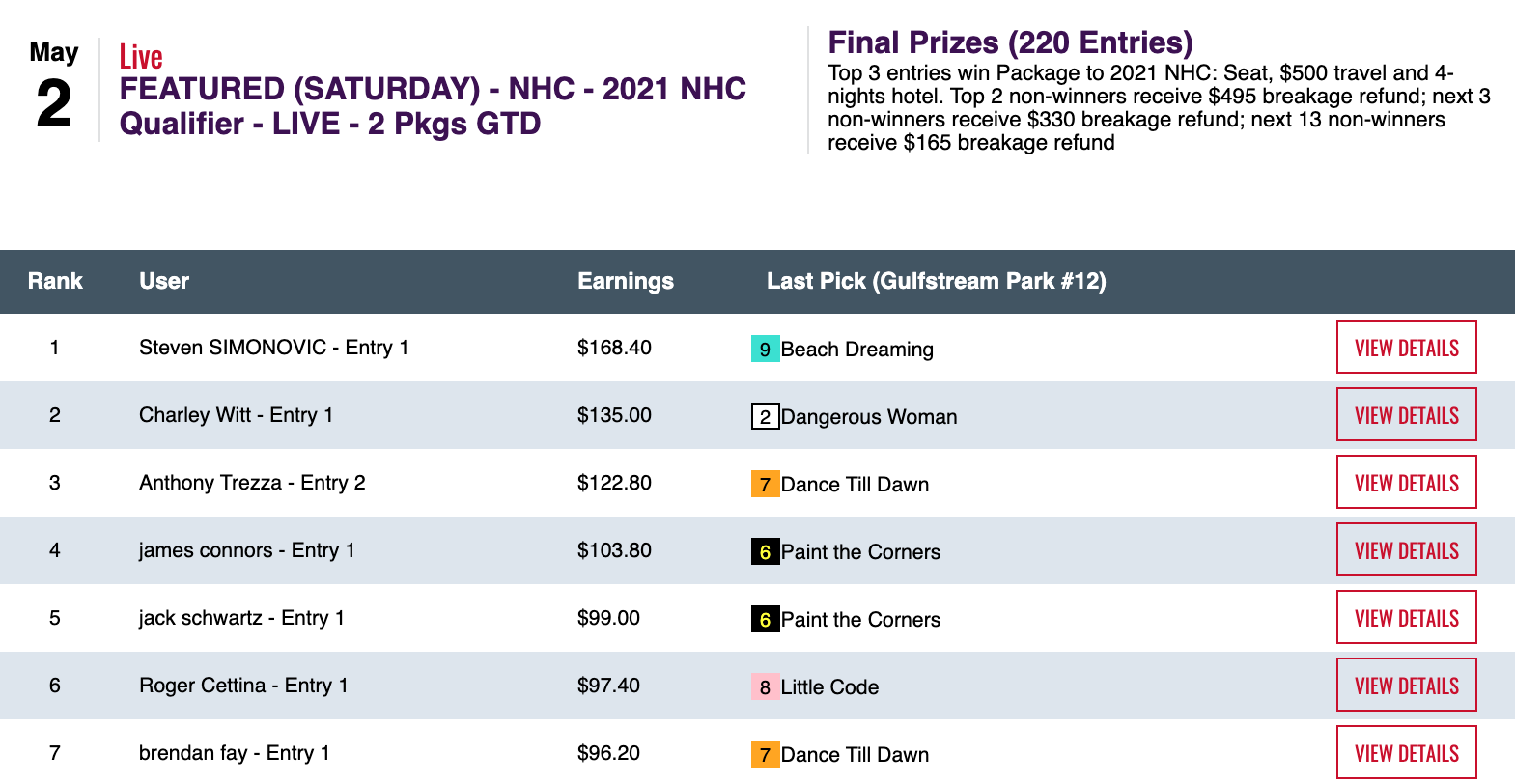 It was Steve Simonovic who put up 6 winners (and didn’t bother with runners up) in Saturday’s NHC qualifier at HorsePlayers.

It has become commonplace lately for NHC qualifiers guaranteeing two seats to wind up awarding three due to robust entry counts. This one was no exception and so runner-up Charley Witt AND show horse Anthony “Doczilla” Trezza will be joining Simonovic at Bally’s next February. For Witt, we are told this is his 10th career NHC qualification!

In the other Saturday HorsePlayers feature, Rick Eber nailed four of the first five winners and never looked back. 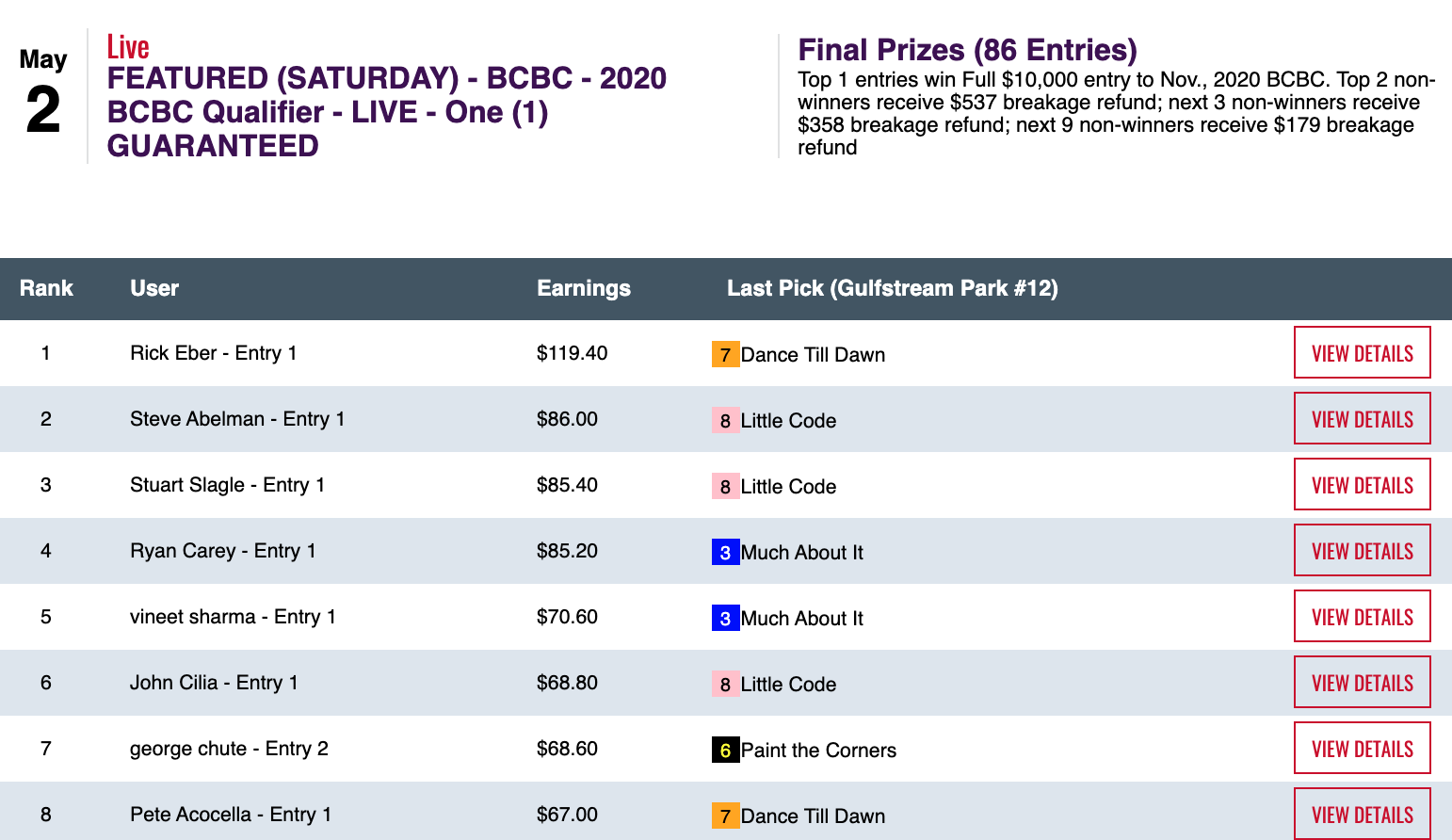 The big winner of the day in terms of earnings was NHC Hall of Famer Paul Shurman in Saturday’s $25,000 Guaranteed tourney. 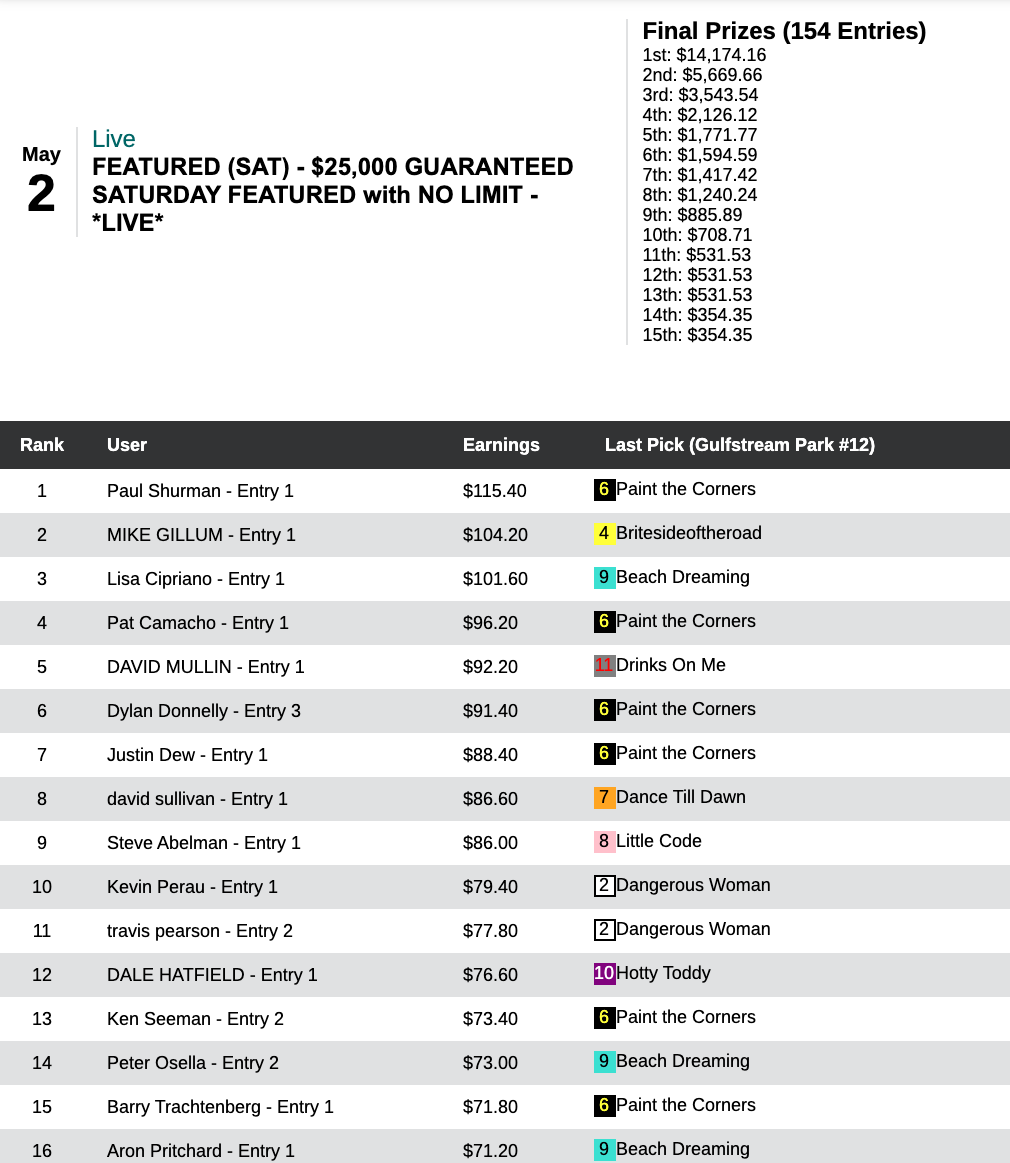 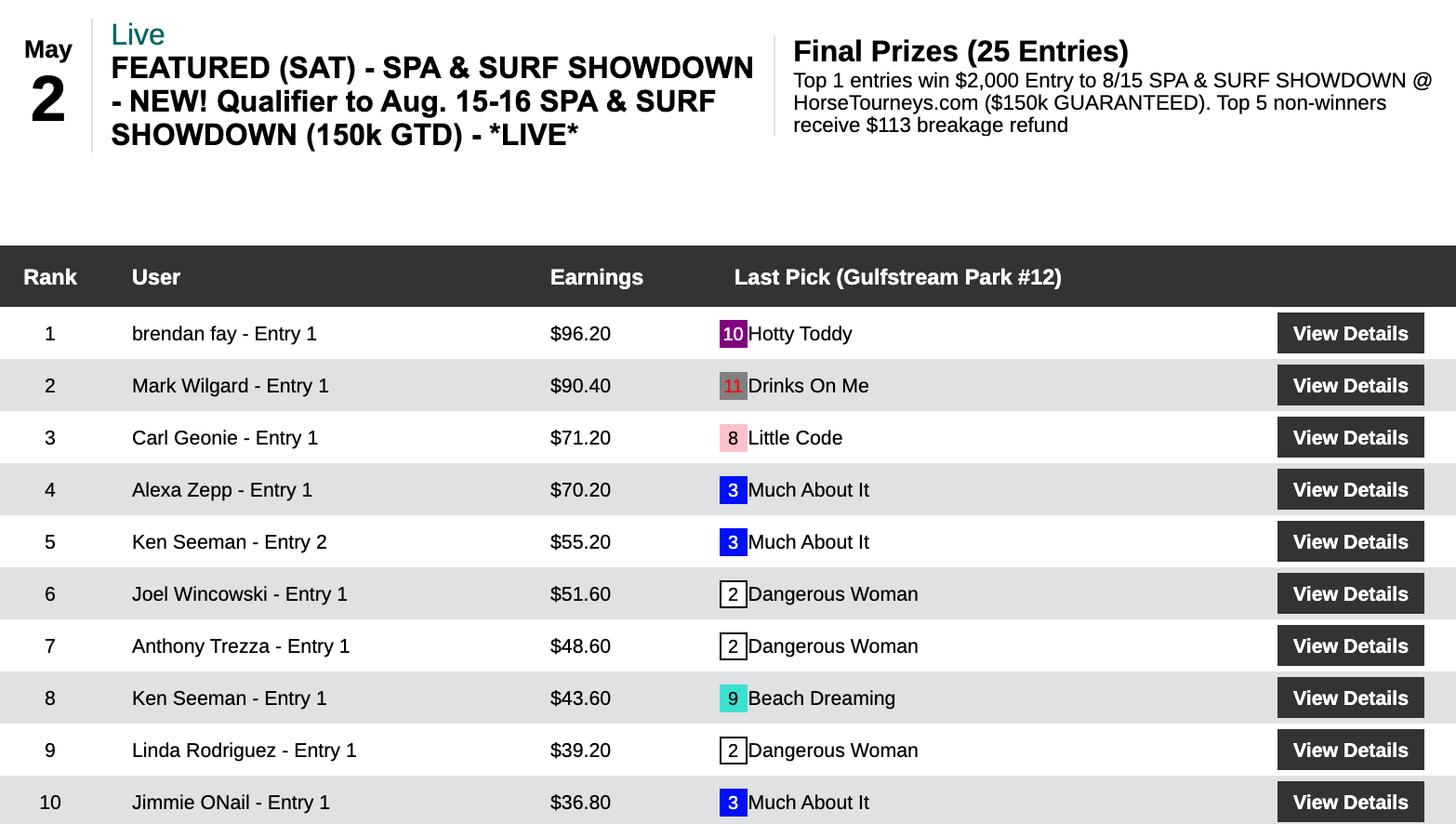 Micheline plus three other winners gave Fay a firm grip on the road in Saturday’s Spa & Surf Showdown qualifier. Fay now advances to the $150,000 Gtd. all-Saratoga-and-Del Mar tourney on August 15-16.

Once again on Sunday, the day’s high score came in the day’s NHC qualifier at HorsePlayers. The event also featured the weekend’s first repeat winner. 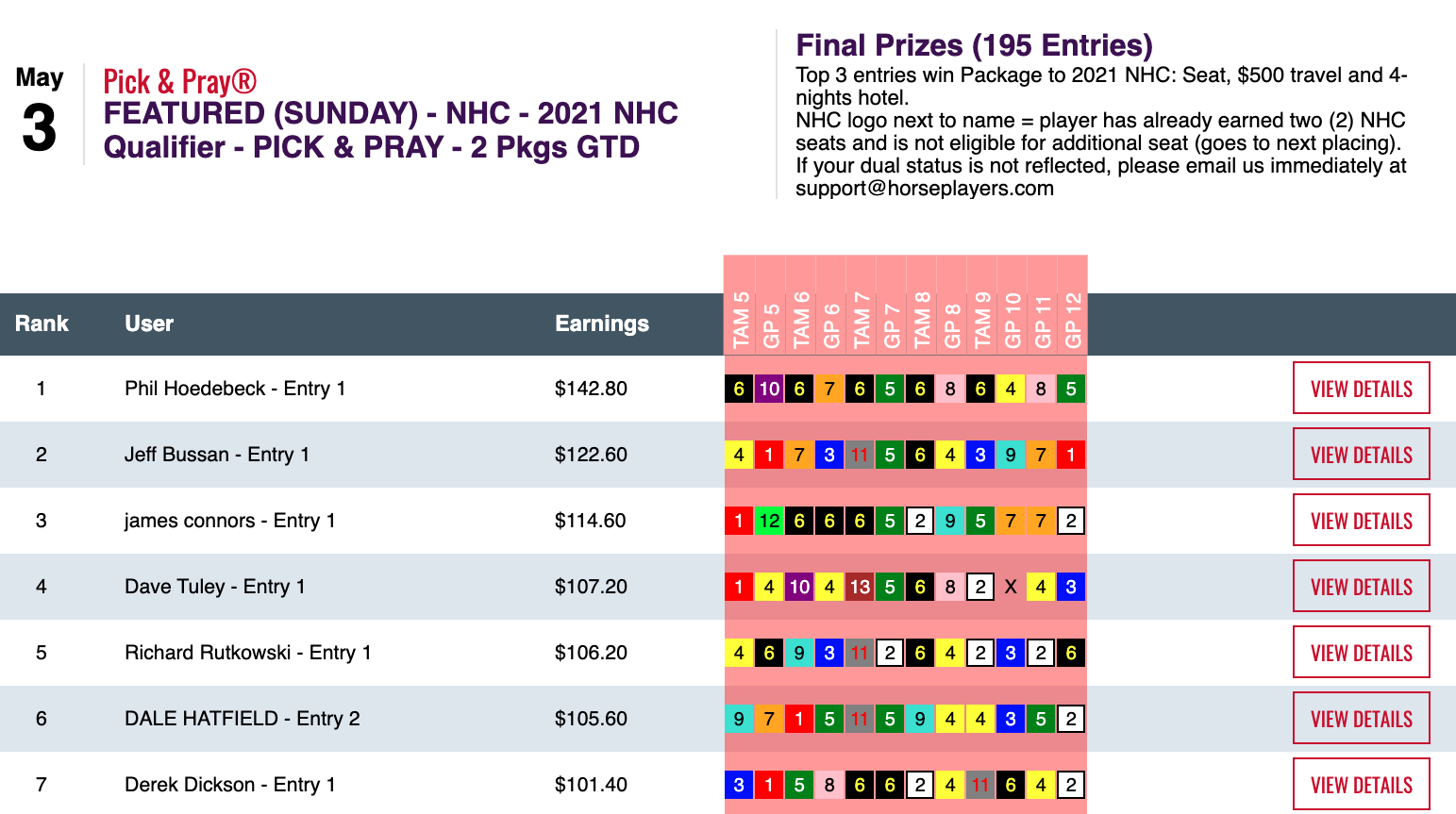 Phil Hoedebeck locked down an NHC berth by leading the pack with 4 wins and a place. Here’s his best-of-day scorecard:

Runner up Jeff Bussan picked up an NHC seat to go with the BCBC entry he captured on Friday. His Sunday score ($122.60) was more than twice as high as his Friday score ($60.00), though he had a couple of races more to work with on Sunday.

As was the case with Hoedebeck and Bussan, James Connors’s big collection came with Dance D’Oro ($43.20, $14.60) in the 7th at Gulfstream. That was one of just 2 winners and 1 place recorded by Connors, who narrowly got the third and final seat (after coming up just short on Saturday) over a hard-luck Dave Tuley.

It was hard luck for Tuley especially because he somehow failed to enter a Pick & Pray selection for the 10th at Gulfstream. Had he just gone with Outshine, who was both the morning line and eventual post time favorite, Tuley (a popular commentator on VSIN) would have finished third since Outshine won and returned $5.80 to win and $4.00 to place. 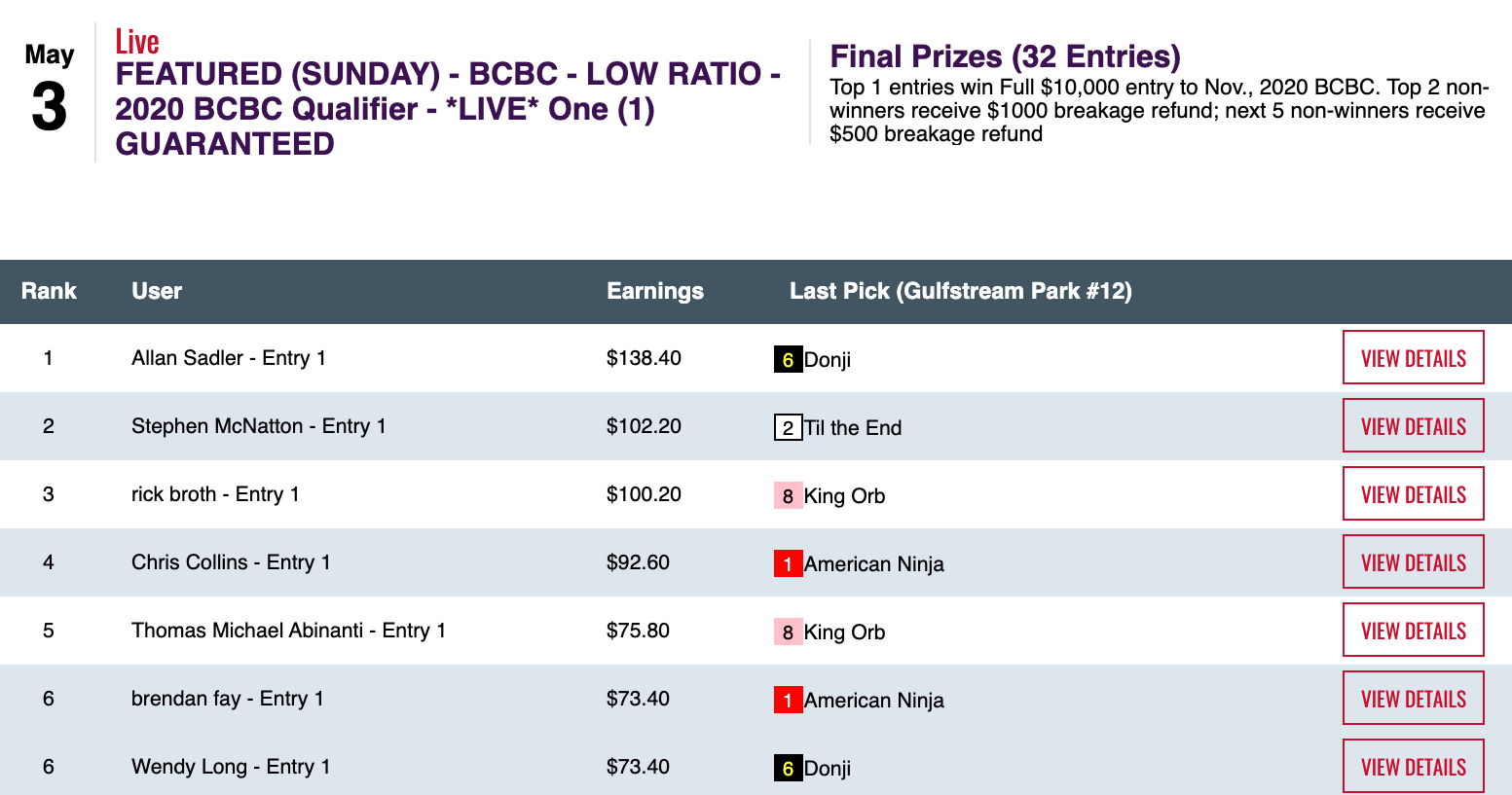 That’s because the top prize is headed to BC…as in British Columbia. That’s where winner Allan Sadler lives (in North Vancouver, to be precise). 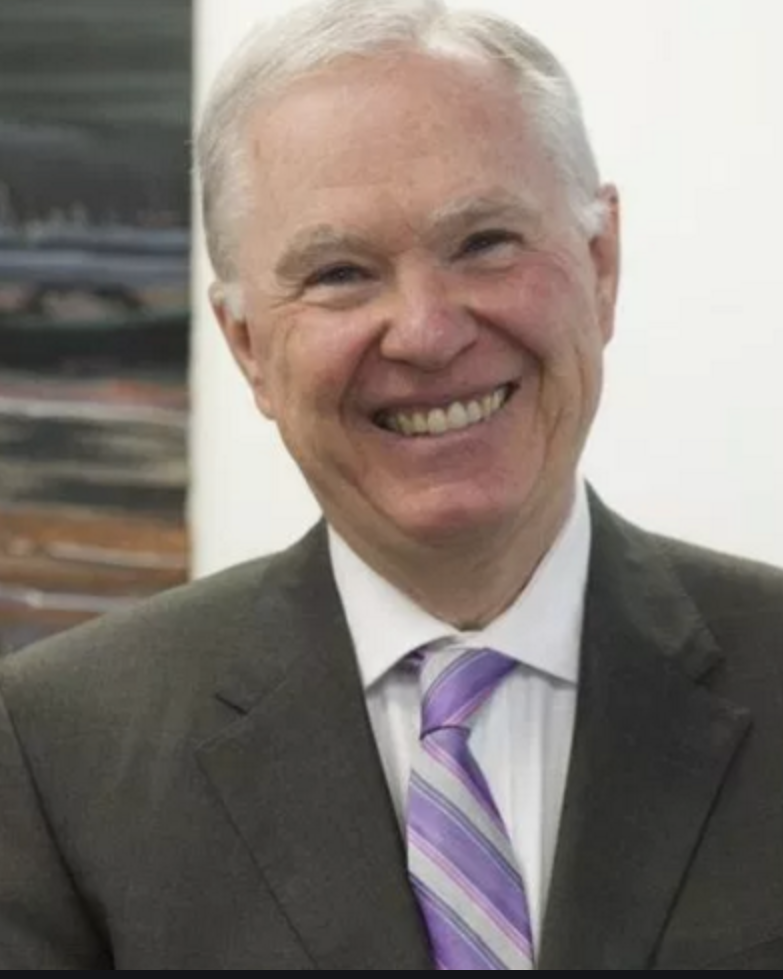 The day’s single biggest prize went to Cayne Collier, despite his picking just one winner. 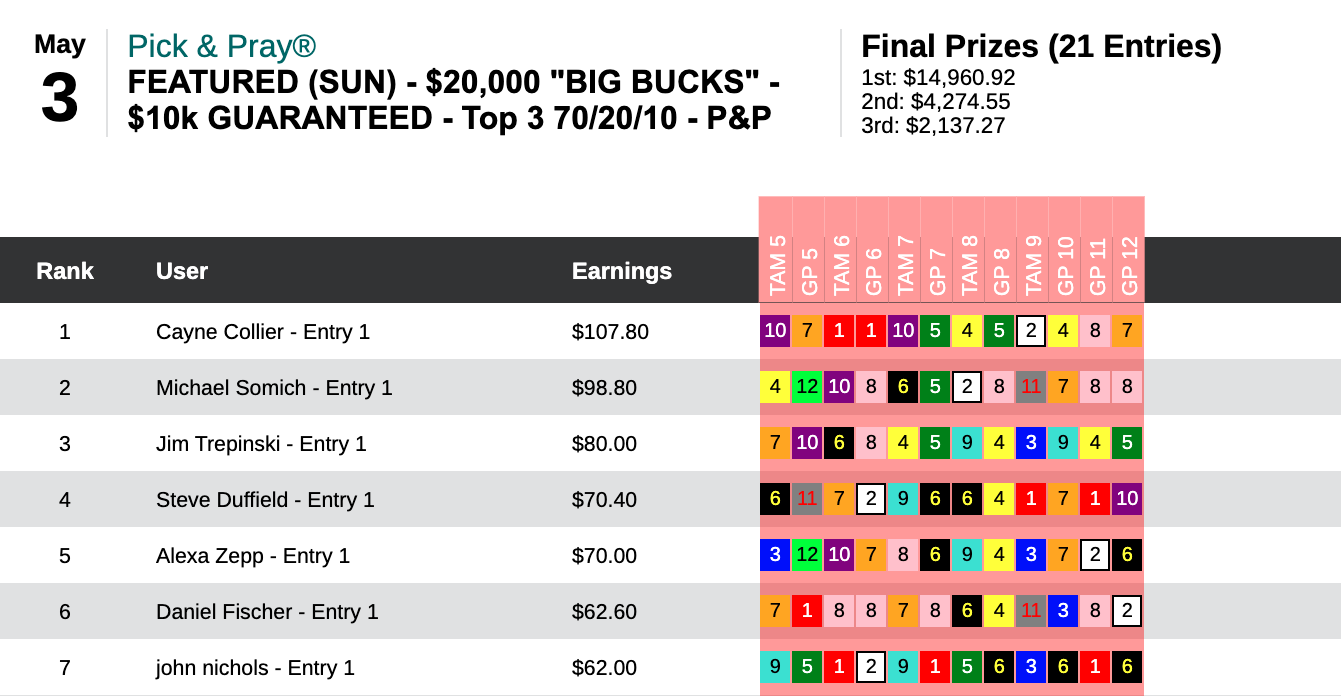 The winner, not surprisingly, was Dance D’Oro…and Collier added 5 place collections to the Gulfstream windfall to get his own personal windfall of $14,960 in our $10,000 Guaranteed Big Bucks tourney, which closed up shop with a total purse of $21,372. Your next Big Bucks opportunity comes next Sunday.

You will also have an opportunity next Sunday to scoop the pot in our $8 Pick 6 Jackpot tourney…because no one did so this past Sunday. 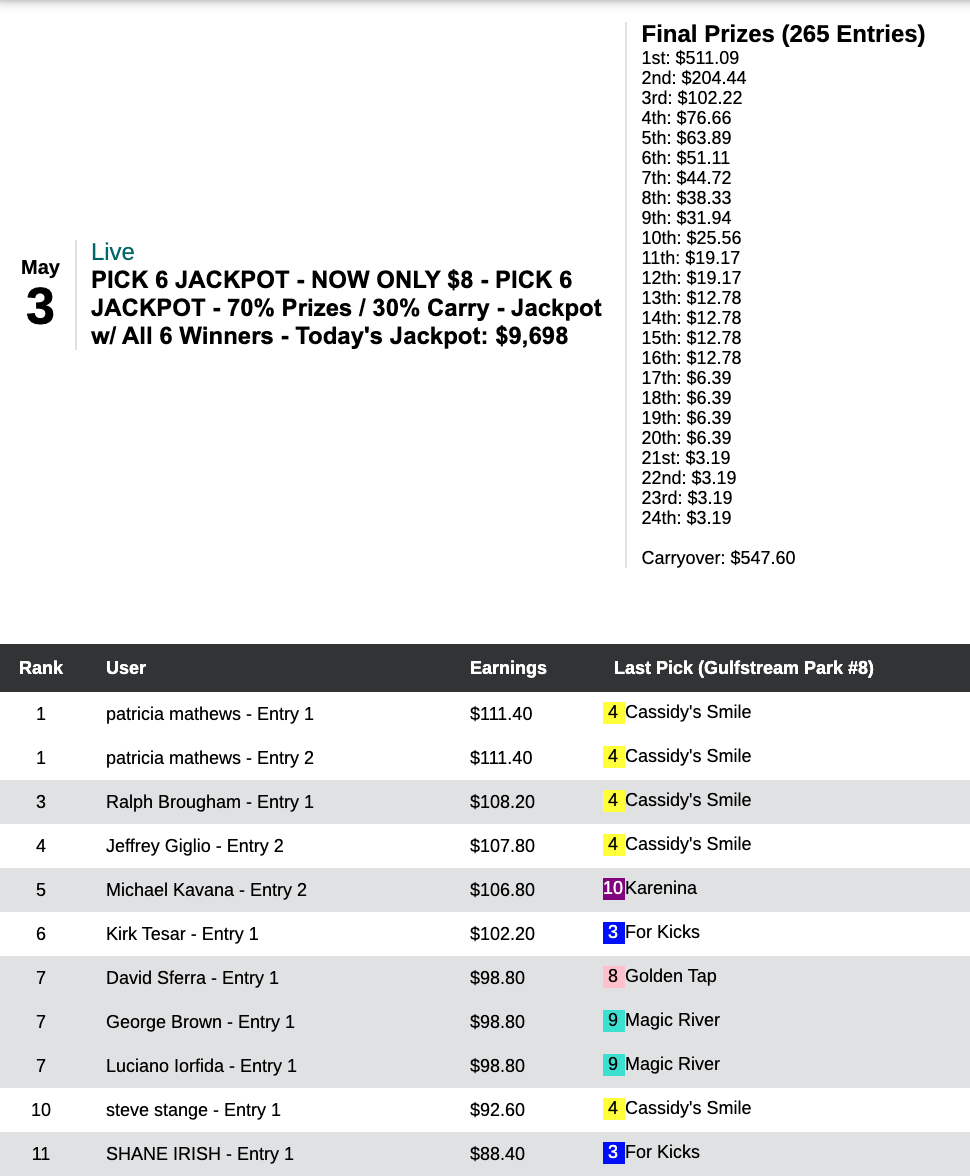 Three players were alive after three races, but no one’s scorecard remained unblemished thereafter. Patricia Mathews had 4 winners—on each of her identical entries—to finish first and second. Next week’s Jackpot, since there were no perfect tickets on Sunday, will start out at $10,245.

Despite not having 20-1 Gulfstream longshot Dance D’Oro, Steve Arrison managed to win on Sunday…comfortably…twice! 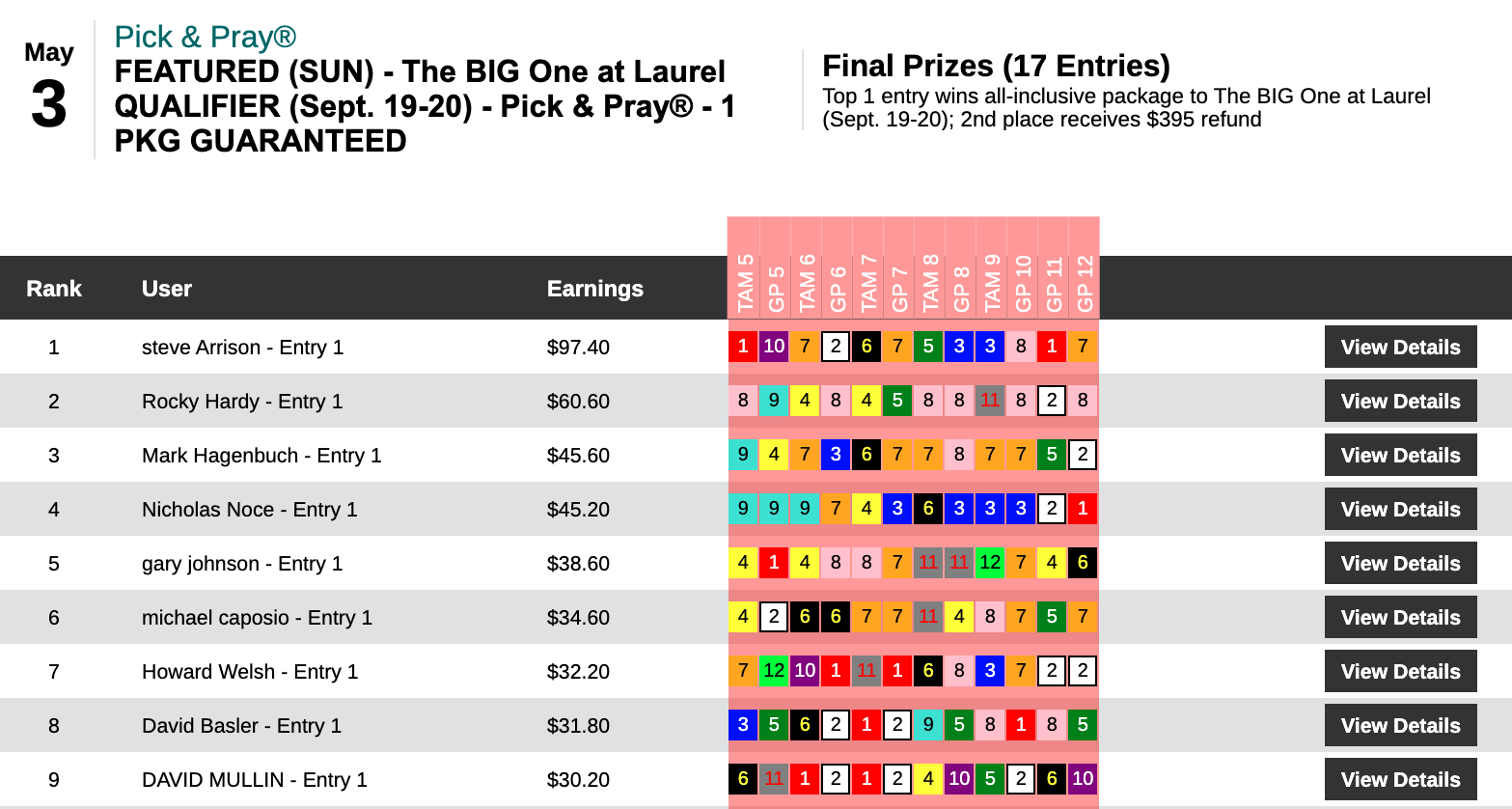 …and he played the same picks back for another “hand-ride” triumph in Sunday’s NHC Low Ratio qualifier here at HorseTourneys.

Lisa Cipriano (3 wins, 1 place) did have Dance D’Oro, and that led to a big score—both on the leaderboard and in her bank account. 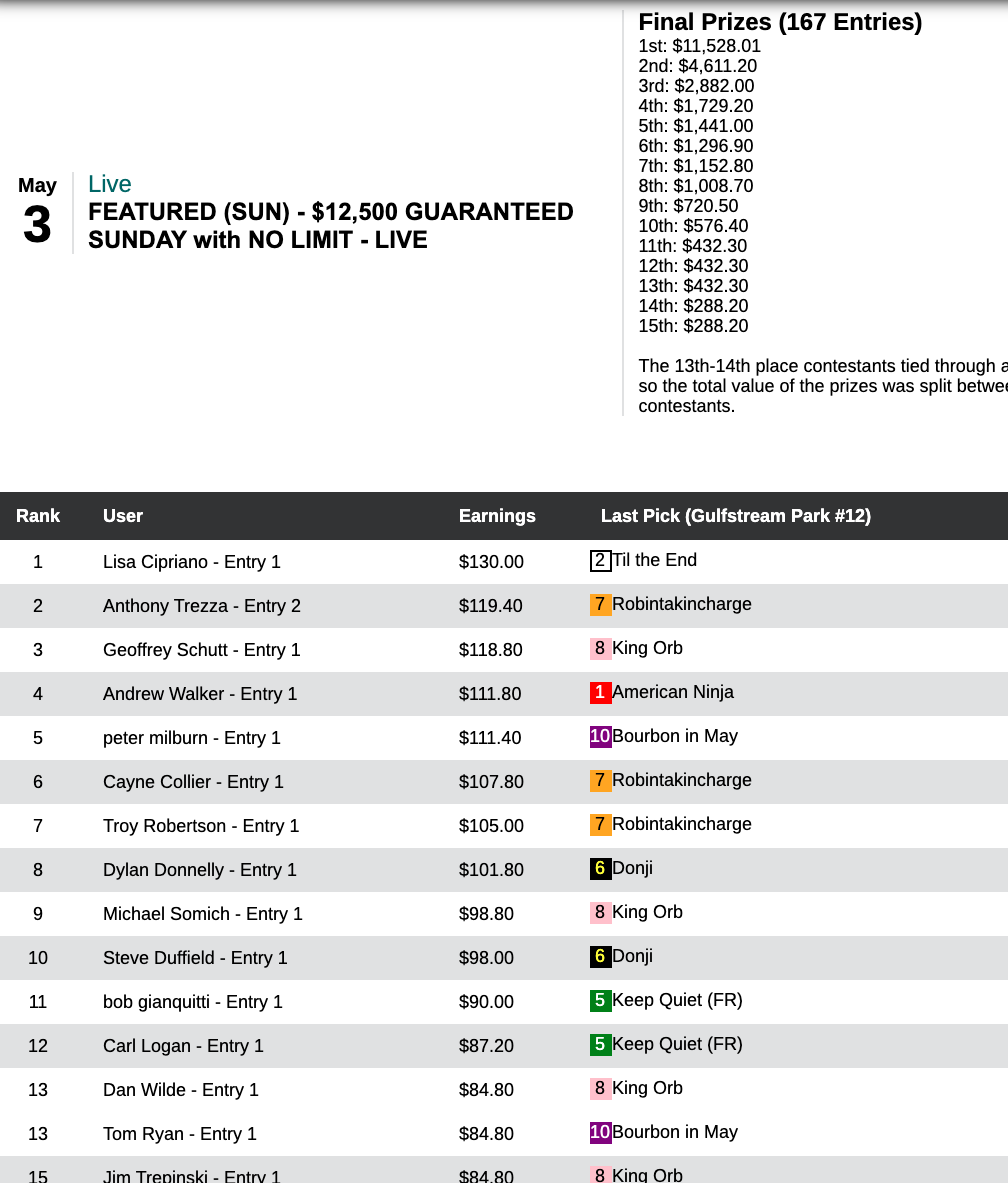 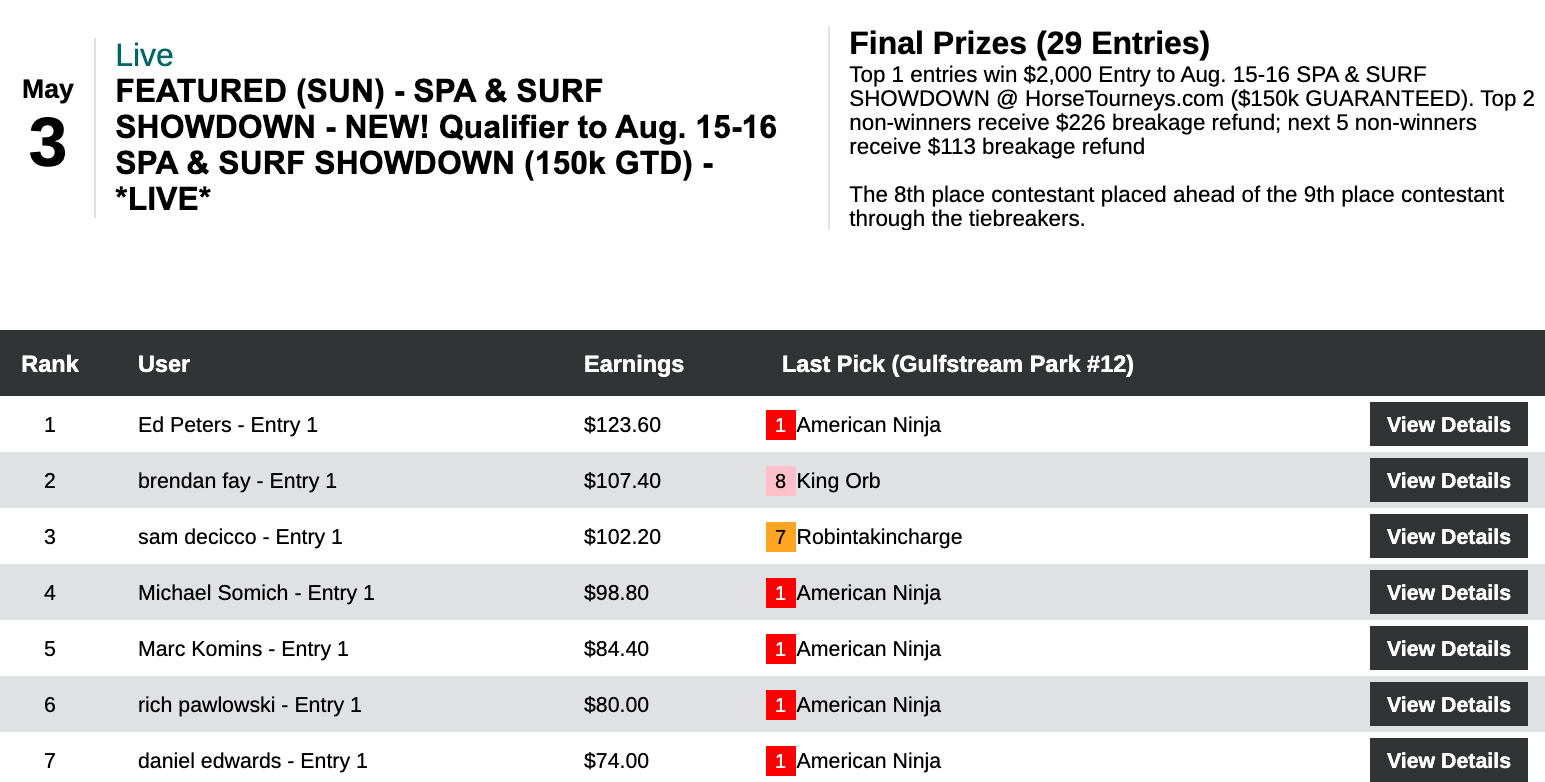 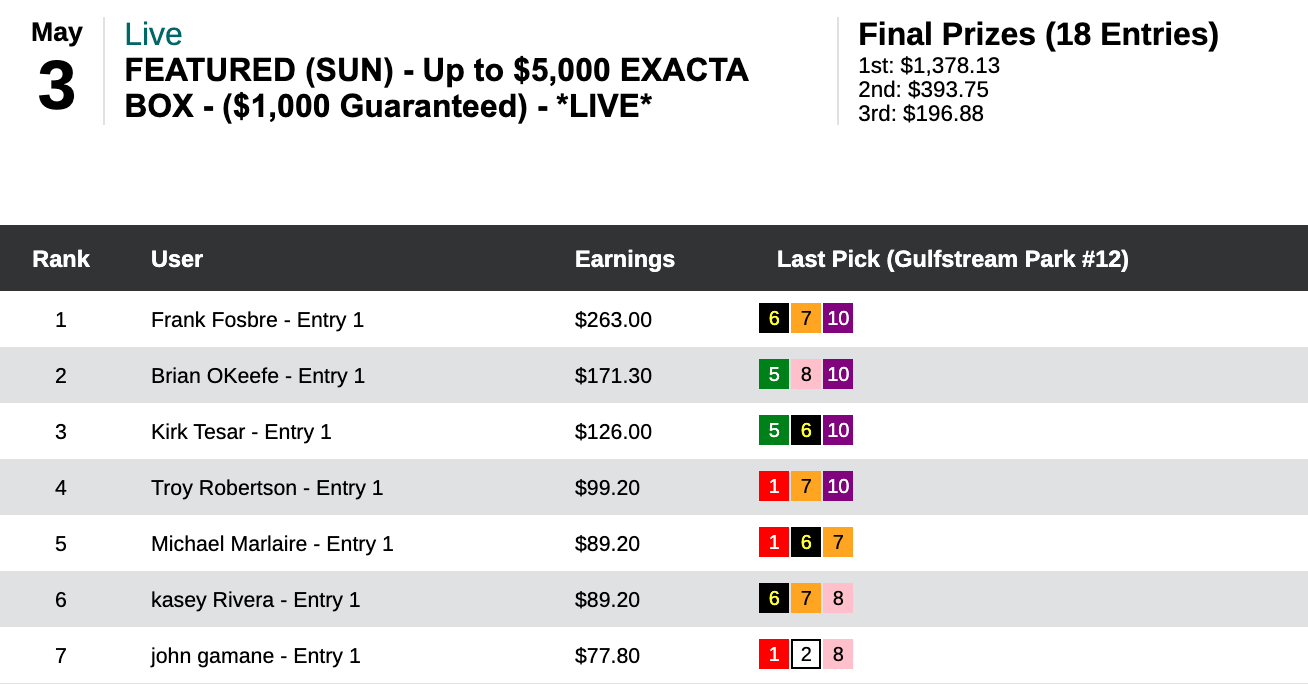 …but then, in the last race, Fosbre showed why he has earned the adjective “top-notch.” He connected for an $89.20 hit in the nightcap—his 6th winning three-horse exacta box of the day—to hold the $1,378 top prize safe from any would-be interlopers. The final purse for the game was $1,968.

Of course, here at HorseTourneys, you can go from “interloper” to “top notch” featured-tourney player in just a matter of a couple of hours. Your next chance takes place on Wednesday. In the meantime, thank you for spending part of your “Derby weekend” with us.