With live, brick-and-mortar tournaments on “pause” for the time being, one can’t help but wonder if the field for the 2021 NHC might be a bit smaller than usual. Last week’s tourneys here, however, certainly gave next February’s event a major boost with 14 seats flying out the door.

Wednesday is the new Friday in terms of being the week’s first opportunity for players to compete for a “Bally’s Berth,” and this week it was Mark Stillmock who took advantage of the early-bird special. 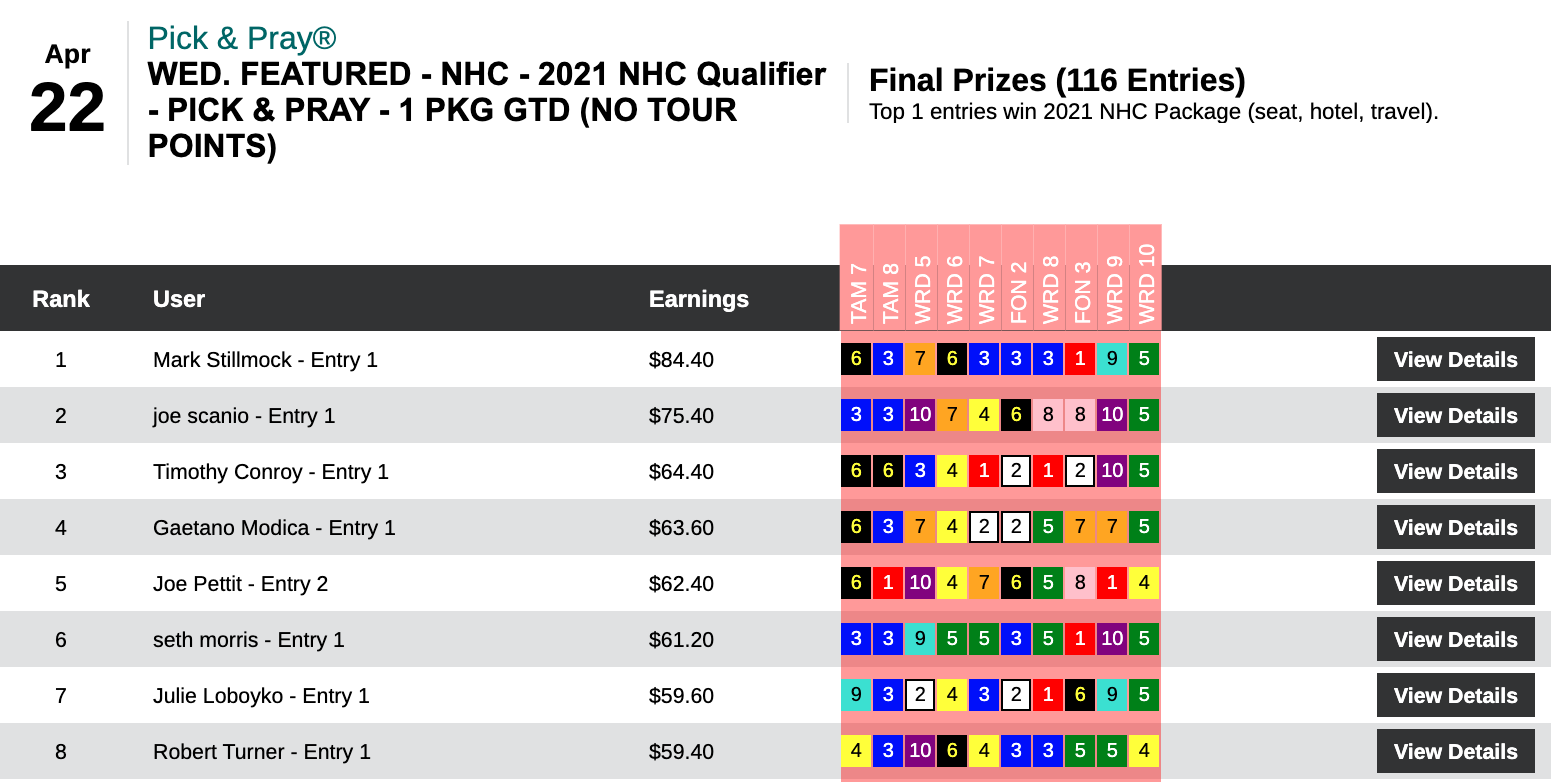 Stillmock became the first of the week’s 14 NHC seat winners by putting up 5 winners and 2 runners up from 10 races. His score of $84.40 was the highest of the day.

Joseph Karabaich did all of his damage in the first eight races, amassing his 6 firsts and 1 second in that span en route to victory in Wednesday’s Spa & Surf Showdown Pick & Pray.

Robert Ruocco, meanwhile, got off to an even faster start.

Ruocco also recorded 6 wins and a place—and also got all of them over the first eight races, including winners in the first five tourney races. 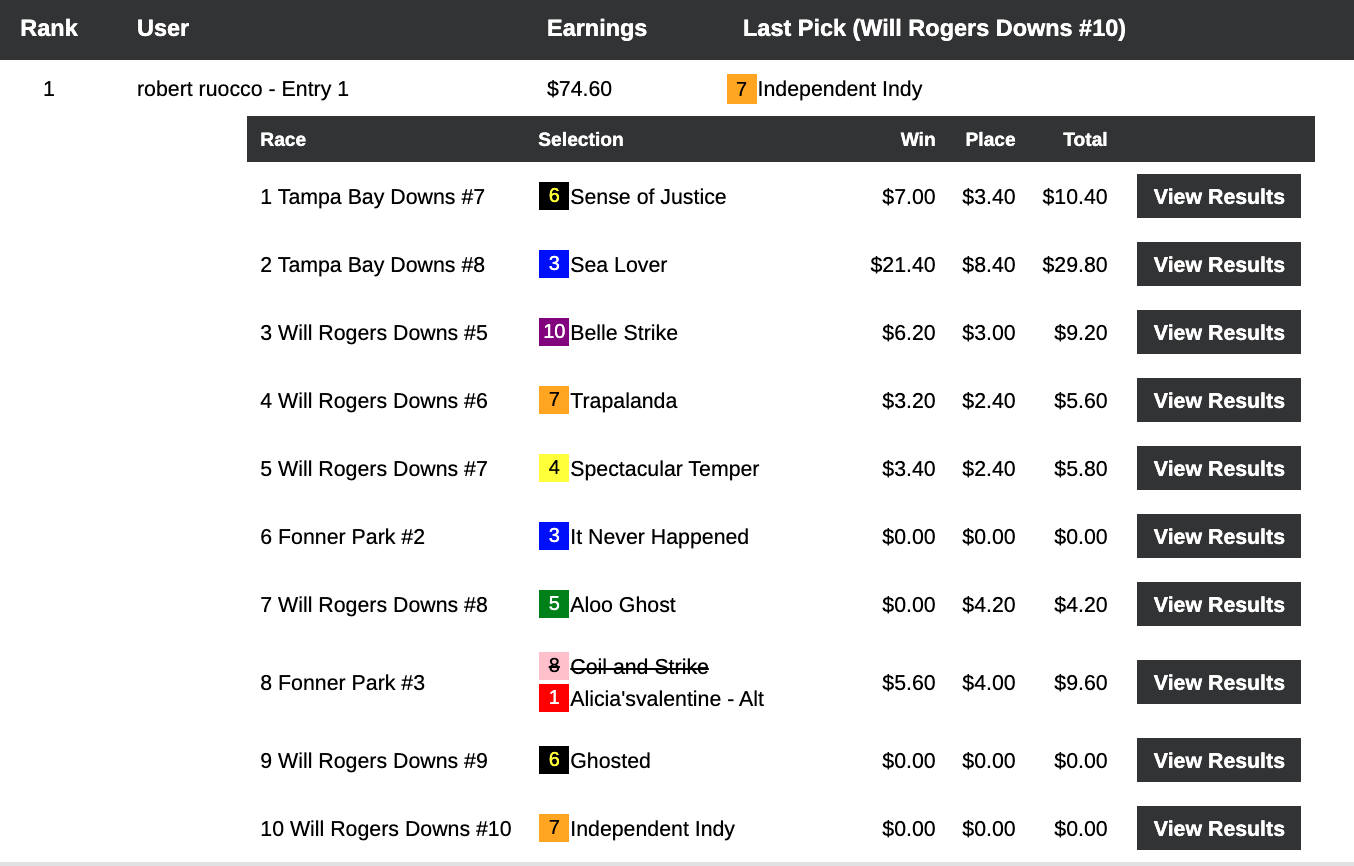 On Friday, HorsePlayers offered the first day of a 2-day, free NHC qualifier. As has been the norm with these, the top 10% moved on to play for five NHC seats on Day 2—but this time around, NTRA officials added a new wrinkle whereby the Day 1 leader was given a guaranteed NHC spot as well. I think it was a good move…because it would have been a shame had Anthony DiGiovanni’s work gone unrewarded.

“DG” got off to a fast start by hitting 31-1 cap horse Rocky Diplomat in the first tourney race…but then again, so did 114 others in the field of 2,075. What you often see in these mass-audience affairs is people taking big swings in almost every race, and so a high-odds connection is frequently accompanied by plenty of goose eggs. This was far from the case with DiGiovanni. After hitting the bomb right off the bat, he remarkably went on to make collections in 12 of the remaining 14 races (8 wins and 5 places in all).

Even with all that, DiGiovanni only managed to hold off an unlucky Daven Turner by $2.30.

One side note that I found interesting: The cutoff to advance to Day 2 wound up being a score of $65.40. Rocky Diplomat, alone, returned a total of $64.00 ($42.00 to win, $22.00 to place). Yet seven of the 115 who picked Rocky Diplomat didn’t cash another thing the rest of the day and, thus, failed to advance. One of those seven “non-advancers” must have been pressed for time. He hit Rocky Diplomat but didn’t manage to get selections in for any of the remaining 14 races.

The NTRA requested that there be 15 races each day for their free qualifier. As a result the very early Rocky Diplomat race (the 3rd at Tampa) was not part of the day’s 12-race featured-tourney events. Since Rocky Diplomat wound up being the day’s only real bomb, it meant that winning scores were considerably lower in Friday’s other marquee competitions. How much lower, you ask?

Howard Yancovitch was more than a Ben Franklin behind DiGiovanni’s mark, but he nevertheless wound up with a Breeders’ Cup Betting Challenge entry worth 100 Ben Franklins in this Low Ratio qualifier at HorsePlayers. Yancovitch’s biggest return came with Golden Garter ($15.60, $3.60) in the 6th at Gulfstream. In the final race, Howard caught a small but essential $2.80 place payoff that elevated him to first place over Peter Behr, who was the only other player in the field of 32 to show a flat-bet profit. 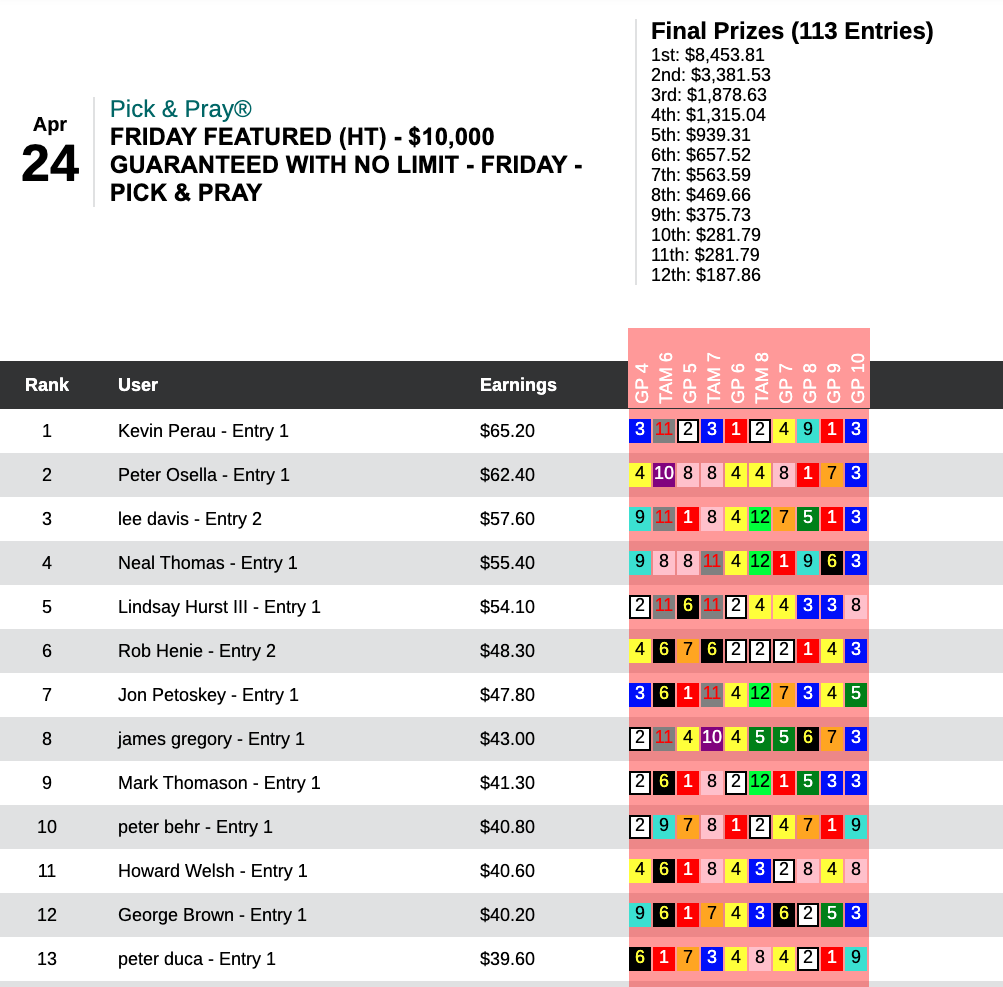 Peter Osella ($3,381) had to settle for second behind Perau, but Osella did no settling in Friday’s Spa & Surf Showdown qualifier. 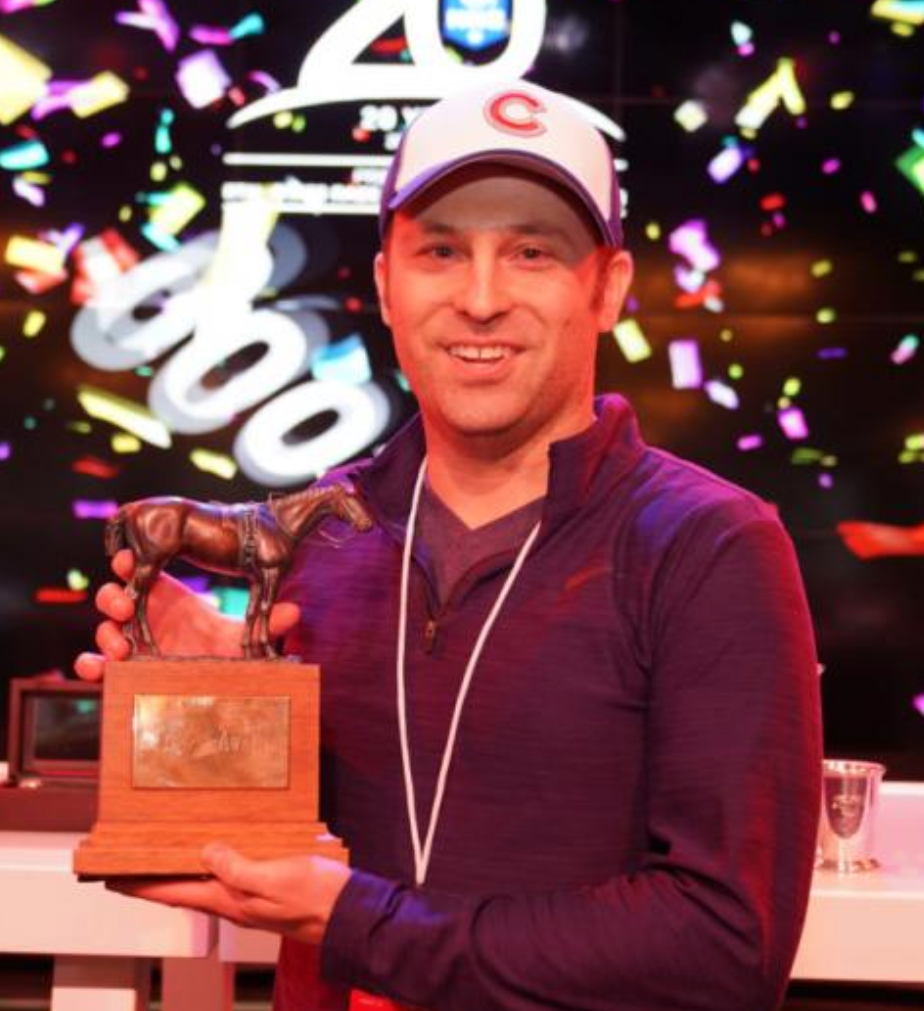 On Saturday at HorsePlayers, he assured that he will have a chance again in 2021 to become the NHC’s first two-time champ.

Also punching his ticket to Vegas was runner up Ken Seeman (5 wins, 1 place) who nailed winners at odds of 5-2 and 9-2 in the final two races to get up into second by 60 cents.

Seeman played his card a little differently in the Breeders’ Cup Betting Challenge qualifier at HorsePlayers and, in fact, lost a winner along the way, but it didn’t matter because his score of $138.80 landed him the coveted $10,000 entry. NHC Hall of Famer Paul Shurman earned a half-coveted, $5,000 partial entry for finishing second. 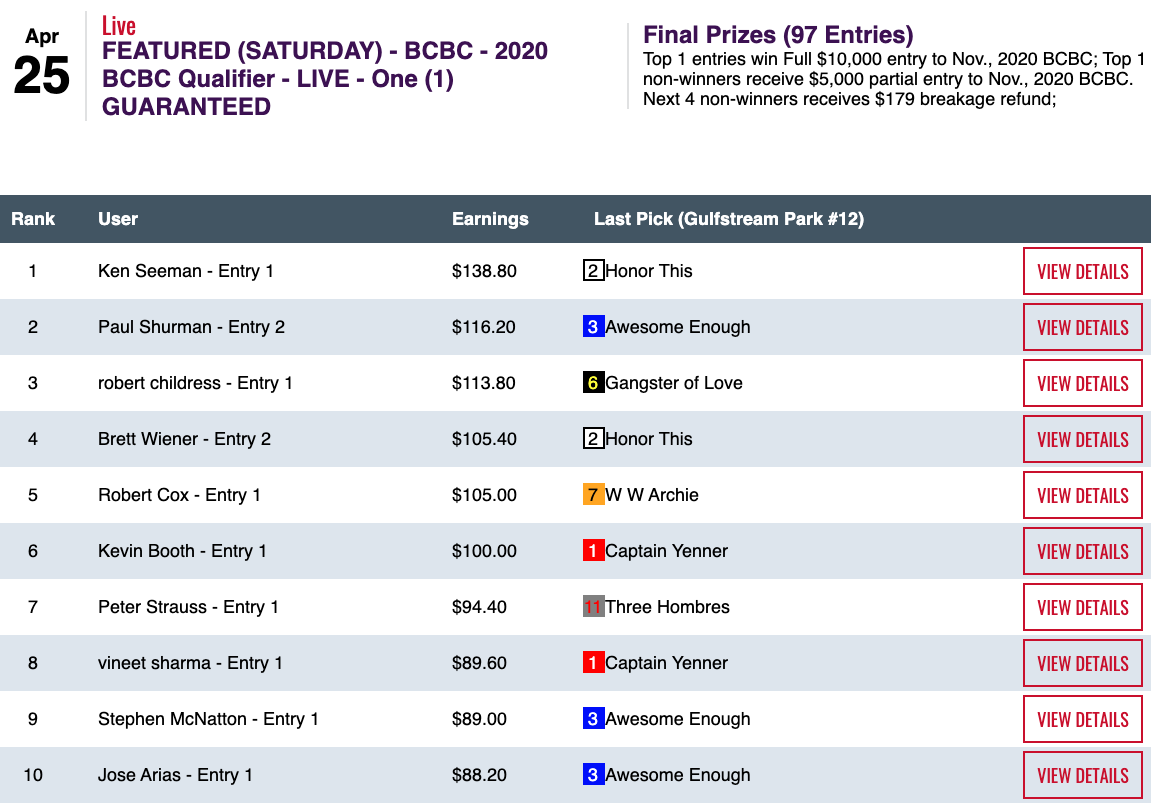 There’s a quirky side note to be shared here as well. Seeman’s victories on Saturday represented his fourth and fifth of the month. (That’s not the quirky side note.) What I DID find interesting in a surprising kind of way was that those five wins earned Seeman spots in the NHC, the BCBC, The BIG One, the Spa & Surf Showdown and the Monmouth Pick Your Prize tournament. If we offer it, chances are that Seeman has won a seat to it…this month. Look for the Long Islander to launch a no-holds-barred assault on next Saturday’s Lone Star qualifier!

Five of Seeman’s opponents in the next NHC were identified on Saturday following the conclusion of the second and final day of the weekend’s free qualifier. 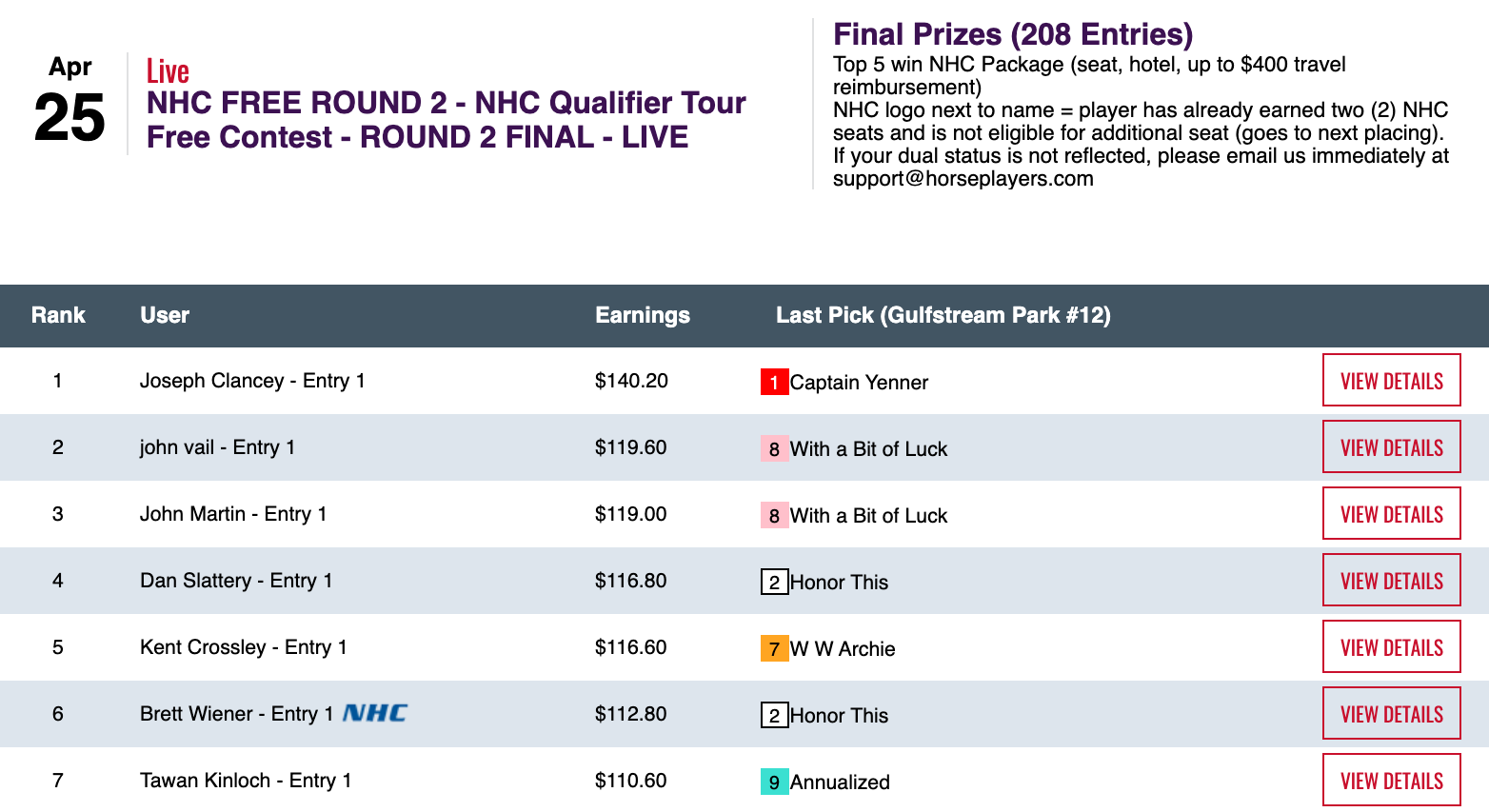 Congratulations to Joseph Clancey, John Vail, John Martin, Dan Slattery and Kent Crossley. It all added up to seven NHC seat winners on the day at HorsePlayers…which has to be some sort of unofficial single-day record.

The official record for highest score in a 12-race featured tourney on this particular Saturday went to Andrew Asaro.

Craig “There’s No Place Like” Hom also had Kwaina.

That was Hom’s only “on top” winner all day…but he added four nice place collections to that tally and came away with a $2,000 Spa & Surf Showdown entry.

Sunday saw the top prizes well distributed with no one winning more than one despite most of the tourneys being Pick & Prays. As a rule, most of the day’s features were tight affairs with moderate scoring. Well…except for our Big Bucks game. 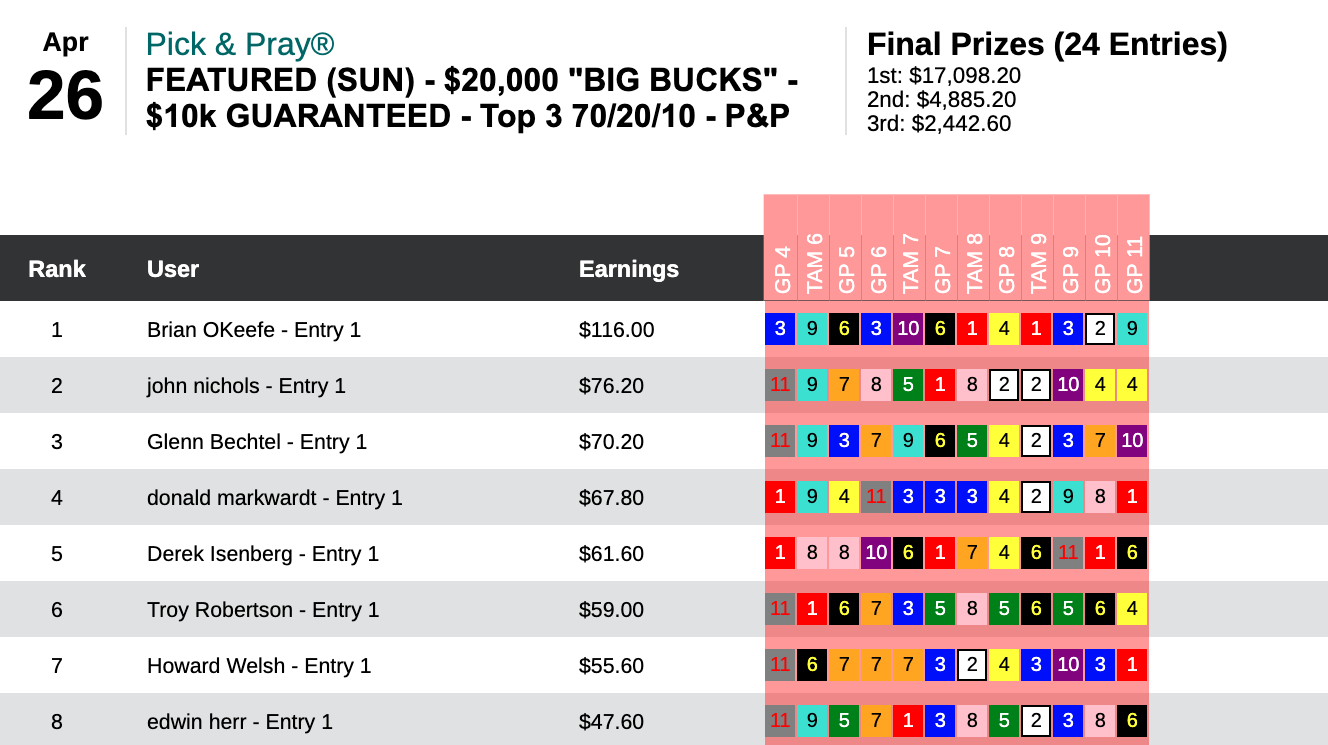 Brian O’Keefe turned Big Bucks into Big Bucks Blowout with his $39.80 victory built on 5 wins and 1 place. His triumph earned him $17,098 from a prize pool of $24,426. O’Keefe’s performance also brought about the semi-rarity of the day’s top score coming from a relatively small-sized game (just 24 players). However, the Big Bucks game certainly brings out some highly-skilled players. Here’s a look at O’Keefe’s Sunday scorecard:

On a day when nothing really paid out at more than 10-1, a very key horse to have was Inconveyance ($18.60, $8.40) who captured the final tourney race, the 11th at Gulfstream under Fanny Olsson. Stephen McNatton picked Inconveyance…

…and that elevated him to a slim, $1.20 triumph that was worth an all-inclusive package to The BIG One. McNatton recorded two wins (including the Fanny Finale) and three places on the day. 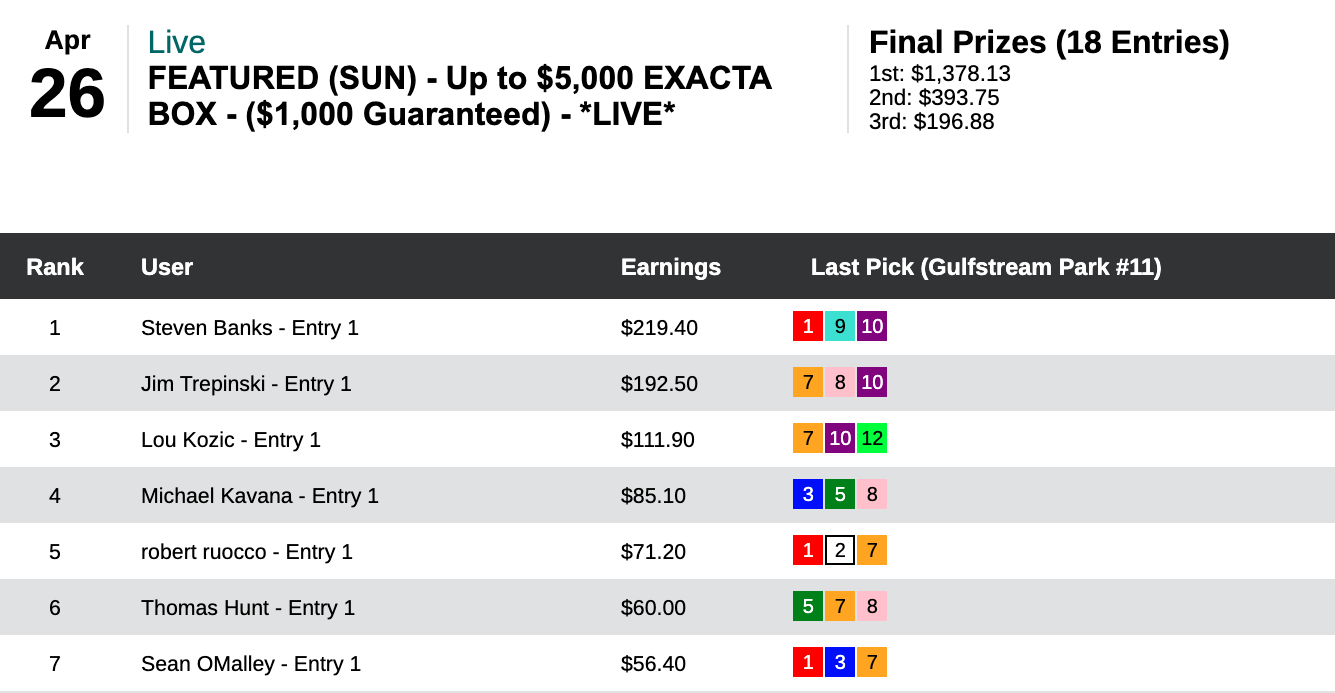 Steven Banks caught the $1 exacta worth $77.10 in the race. That was the last of his four successful three-horse boxes during the afternoon, which combined to earn him top money of $1,378 in a game ultimately worth a total of $1,968.

Philip Webber didn’t have Inconveyance, but that wasn’t his fault.

Sunday’s $8 Pick 6 Jackpot tourney ended with Gulfstream’s 10th race (not the 11th). Webber finished strong with four winners out of six race to take the top prize. No one picked all six, though, so that means next Sunday’s Jackpot will start out at $9,698.

Derek Isenberg (3 wins, 3 places) did get to play the 11th at Gulfstream. He didn’t pick Inconveance, but he did the next best thing.

His selection of late-running runner up Consilium ($6.60 to place) got him up by a mere 40 cents in Sunday’s NHC Low Ratio qualifier. In a sense, Fanny and Inconveyance did help Isenberg out a bit by being 8-1 and not soaking up too much of the place pool.

His 3 wins and 3 places got him all the way around in the day’s Spa & Surf Showdown qualifier. Over at HorsePlayers, meanwhile… 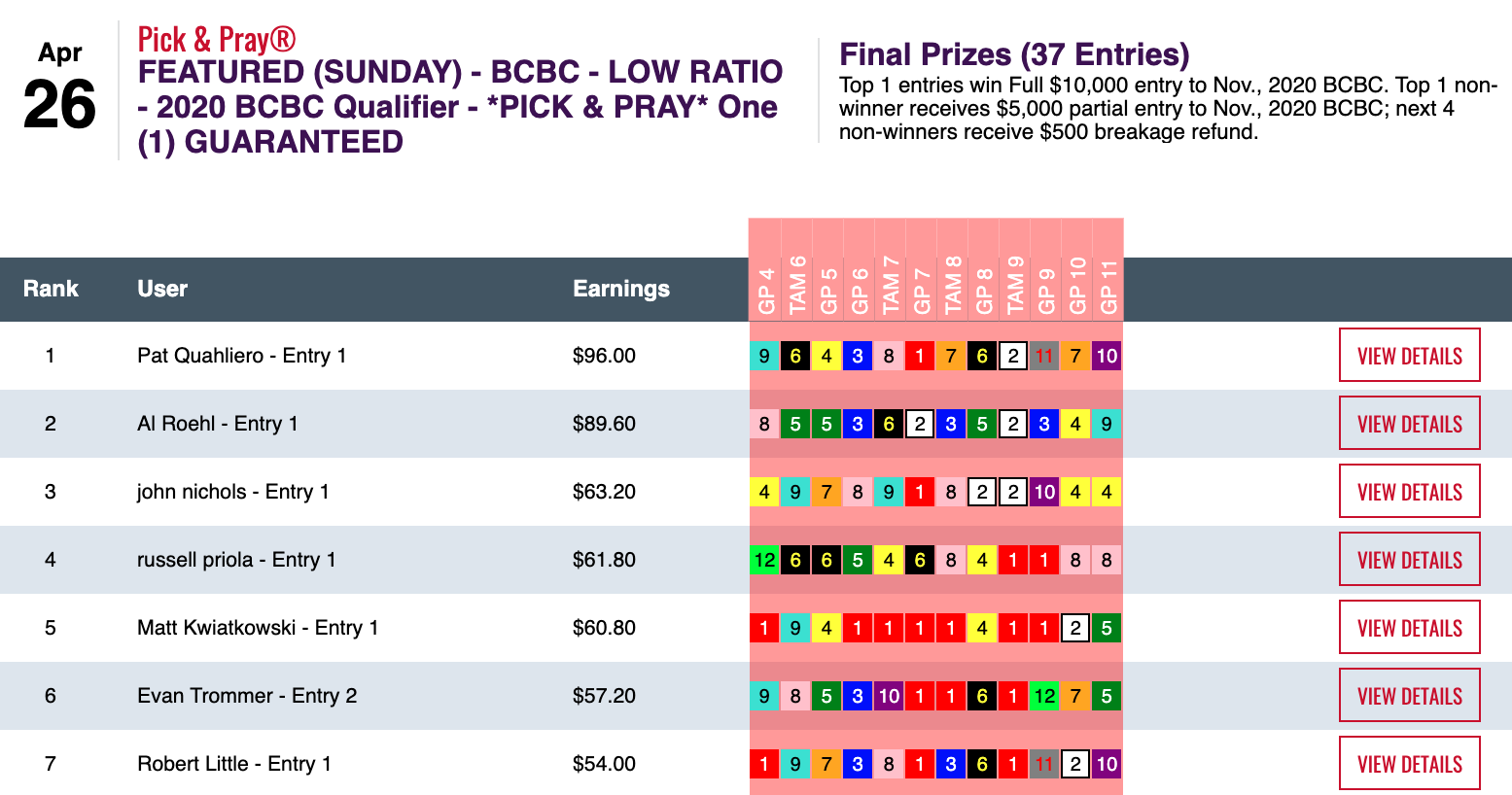 Roehl got halfway around by finishing second to Pat Quahliero and earning a partial, $5,000 entry in Sunday’s Breeders’ Cup Betting Challenge qualifier. Quahliero got the full $10,000 entry thanks to Tampa Race 9 winner Wild Wigglin Jack ($20.60, $9.20) plus five other winners and a place.

Finally, the weekend of “extreme” NHC qualifying had a fitting finish with Sunday’s 2-seats-guaranteed play-in attracting enough entries to award not two, not three, but four spots.

Alan Levitt led the way with three winners (all between 8-1 and 10-1) and two runners up. Barry Camarda (6 wins) and Dan Camoro (5 wins, 2 places) couldn’t “cam-ouflage” their skill. They each cracked triple figures to earn Bally’s Berths. The fourth ticket to Vegas went to Seth Morris (4 wins, 2 places), who had to do some heavy lifting at the end to get up. Morris cashed in each of the final four tourney races, including a win by the 8-1 Inconveyance (#9) in the nightcap. And since the 7-1 Consilium (#1) came charging home up the rail to get 2nd by a neck over the 8-5 favorite Jack Beanstalk, Inconveyance’s place price ($8.40) was good enough to slip Morris into 4th place by 20 cents over the hard-luck 5th-place finisher Dino Herrera.

Tournaments often work out to be a zero-sum game. For every delighted winner, there is another experiencing an equal measure of frustration over what might have been. But those past setbacks are a big part of what makes the eventual victories so sweet. It’s all part of competition, and it might explain why, for so many of us, tournament play is even more engaging than parimutuel play itself. What we do—or don’t quite manage to do—is out there for all to see.

Thanks to all who came out to compete last week.