Sometimes we’re a little slow on the uptake here.

When we started the $10,000 Guaranteed Big Bucks tourneys a while back, we only ran them every other week because we were afraid the high entry fee ($1,150) would mean we would have trouble filling them on a weekly basis. We were right, but we were wrong. Mainly we were just wrong.

After a while (perhaps too long a while), we noticed that the first week of feeders wasn’t generating much play, while the second week of feeders was far more productive. Most times, it seemed we were lucky to attract a field of 10 or 11 for the every-other-week final.

So we figured, “What the heck?” and decided to try running the 20-entry-maximum Pick & Pray tourney every Sunday to see if the game would benefit from greater continuity. So far, so good.

Last week, Howard Welsh won $14,248 in what was a second-consecutive sold-out Big Bucks game. We only pay down to three places in these, (on a 70%/20%/10% basis), but Marikate Carter nearly doubled her money just for running third.

In addition to its low, 11.5% takeout, the Big Bucks tourney is popular to many not just because of the 20-entry limit, but because it is always run as a Pick & Pray. As a result, the game is devoid of late-game stabbing based purely on the standings…and if you hit a price horse at any point, there’s a good chance that you will be one of few to have it.

There’s an added bonus to the Pick & Pray element this Sunday. 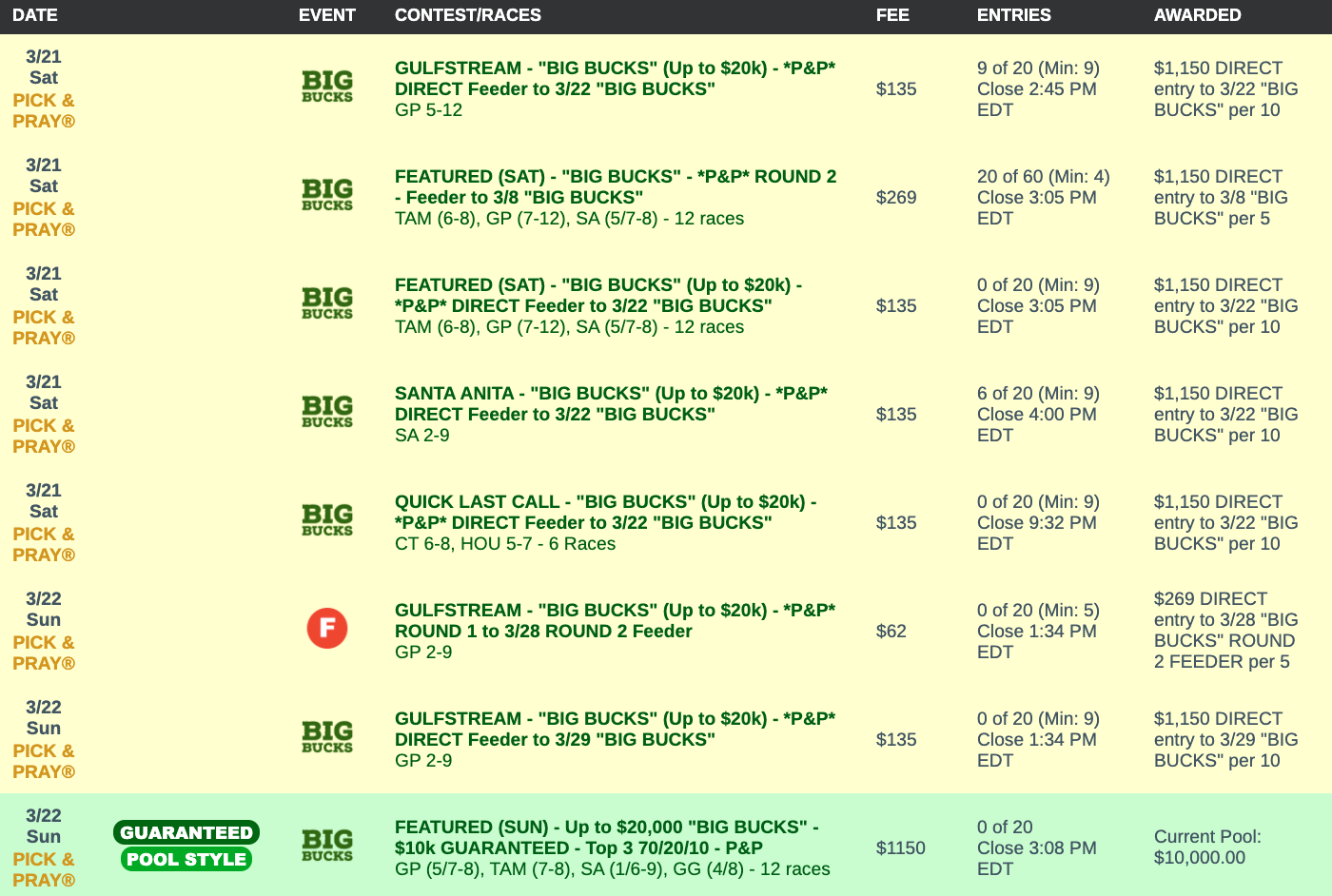 Due in large part to the shorter-than-usual availability of tracks right now, Sunday’s 12-race featured schedule stretches out over 4 1/2 hours. Obviously with a Pick & Pray, you needn’t devote all that time to watching post parades, scrutinizing changes in the odds, etc., from race to race if you have something else to do.

Big Bucks tourneys aren’t for everyone. They’re not cheap to play. However, if you’re comfortable competing at that level, you may want to give them a look. Just be aware that you probably no longer have the luxury of waiting until the very last minute to get your entry in!