Thomas Blosser is the winner of the first annual Flo-Cal Faceoff.

The 65-year-old Cornville, Arizona, resident racked up a final score of $285.40—including a day-best of $192.60 on Saturday—to finish first overall and collect the grand prize of $82,270 in the 170-entry tourney. Blosser also receives an additional Day 1 bonus money prize of $6,500 for his top Saturday score. 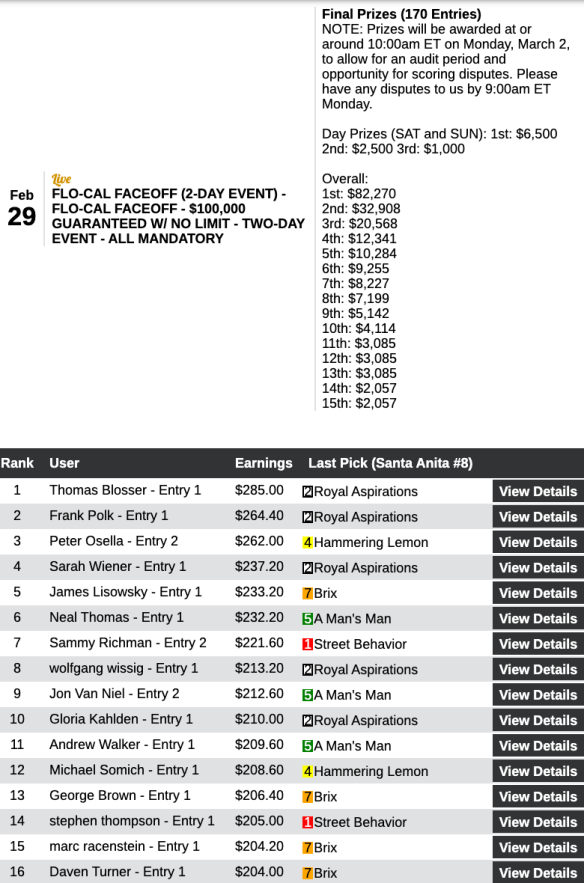 Frank Polk had a strong Day 2 (fourth best on Sunday) to finish second and earn $32,908. Peter Osella completed the trifecta and grabbed $20,568 plus another $2,500 for having the second best score on Day 1. 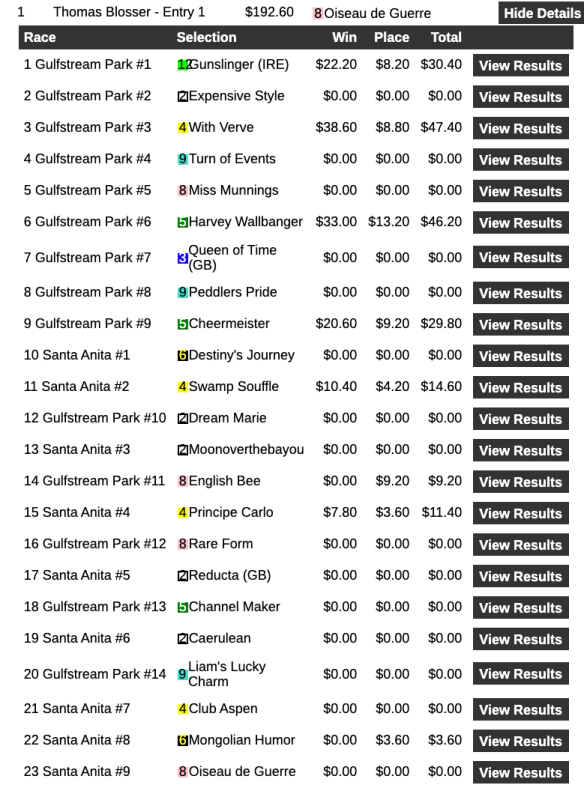 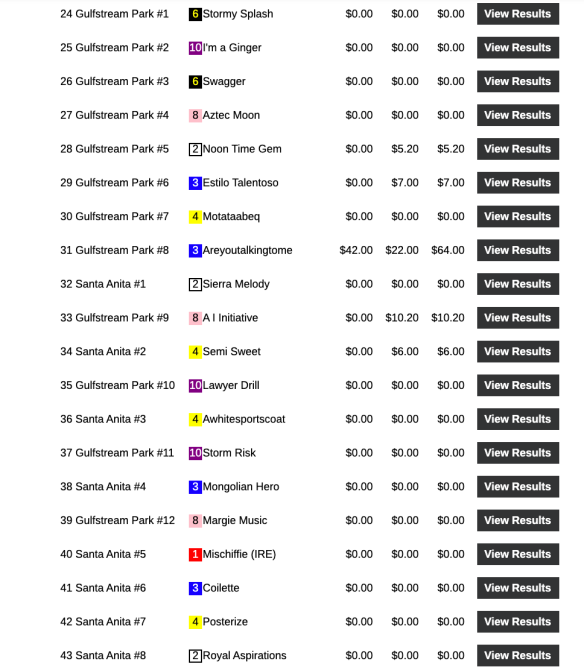 Blosser’s chilly spell continued through the first seven races on Sunday, which allowed Peter Osella to take over the lead. But Blosser took it back for good when he connected on 26-1 winner Areyoutalkingtome in the 8th at Gulfstream.

None of the top three Day 2 scorers wound up in the top 15 overall…but they did win Day Money (and rewarding out-of-the-money finishers is a pretty nice use of Day Money when it works out this way).

On behalf of everyone at HorseTourneys, we thank you for your enthusiastic support of our first-ever Flo-Cal Faceoff. And don’t look now…but feeders have just gotten started for this summer’s $150,000 Guaranteed Spa & Surf Showdown. 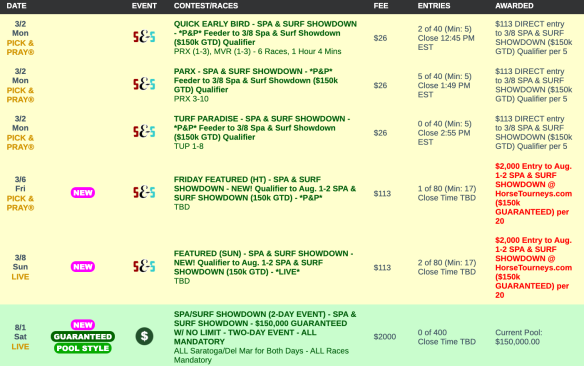 Between now and the Showdown, keep an eye out for one or two special, high-stakes tourneys that we have in our mind’s eye. We’ll keep you posted.

There were many other noteworthy tourneys over the weekend. In Friday’s $7,500 Guaranteed Pick & Pray, Peter Osella perhaps signaled that he was razor sharp and primed for a big Flo-Cal Faceoff. 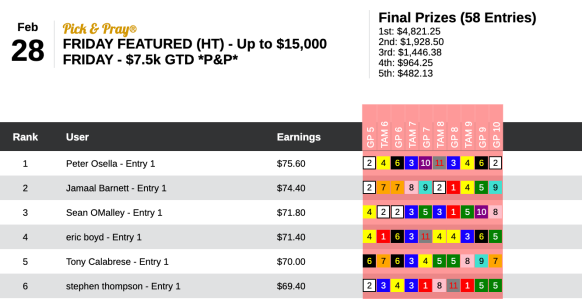 Robert Rosette and Joe Steinberg each picked up $1,500 entries on Friday to the Horse Player World Series.

Rosette (2 wins, 3 places) and Steinberg (3 wins, 2 places) each had Poseidon’s Passion plus 6-1 winner Fashion Babe in the 9th at Gulfstream. 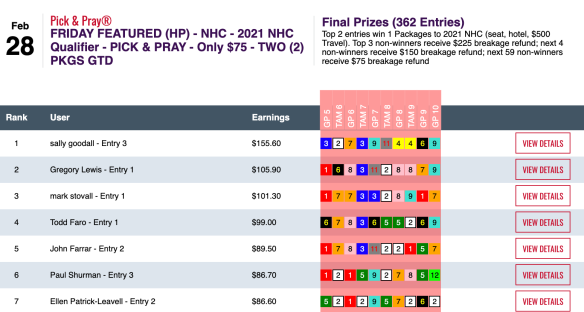 The now 19-time NHC qualifier is making it look too easy. On Friday she had 5 firsts and 2 seconds to capture the day’s $75 NHC qualifier and pick up her second seat (already) to the 2021 NHC. Here’s a look at Goodall’s best-of-the-day Friday scorecard: 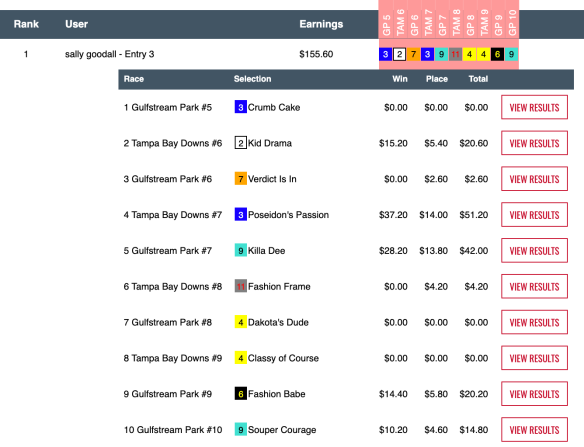 Also securing an early NHC reservation was Gregory Lewis (6 wins). Lewis had Super Courage ($10.20, $4.60) in the 10th at Gulfstream to get up for second behind Goodall.

The other Friday feature at HorsePlayers was taken by Edward Diamond. 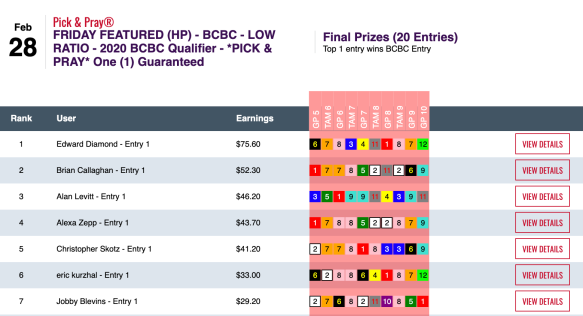 Sticking with HorsePlayers, but moving over to Saturday action, Basil DeVito came down from the top rope to record the day’s high score. 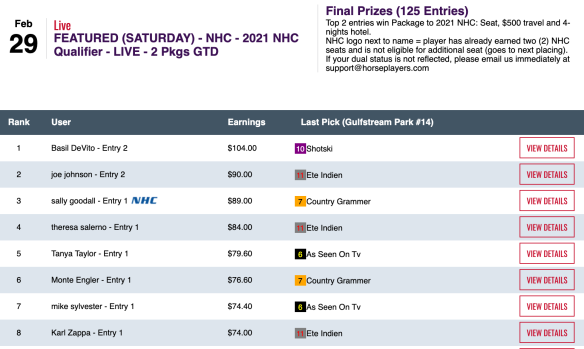 DeVito and his 6 wins and 2 places grabbed an NHC seat in the day’s regular qualifier along with runner up Joe Johnson (5 wins, 3 places).

Here was how DeVito’s Saturday went: 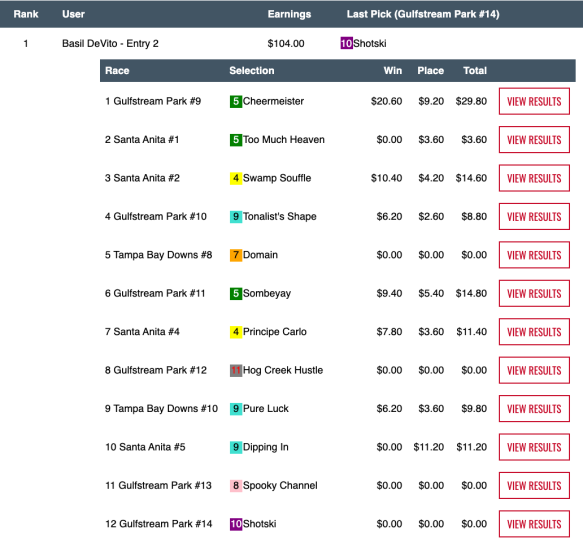 Meanwhile, Sally Goodall thoroughly embarrassed herself by only managing to finish third. Clearly she is slipping. 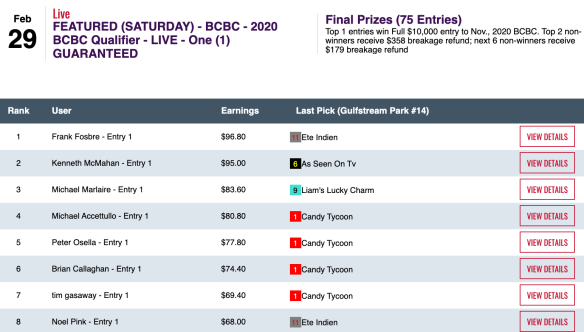 It basically came down to the last race, the Fountain of Youth Stakes, to settle this one. Both deftly eschewed Dennis’ Moment…but since Fosbre went with 3-1 winner Ete Indien and McMahan opted for 5-2 third-place finisher As Seen on TV, Fosbre took home the $10,000 BCBC spot.

Back here at HorseTourneys, Mark Thomason found himself really enjoying the goings on at Gulfstream. 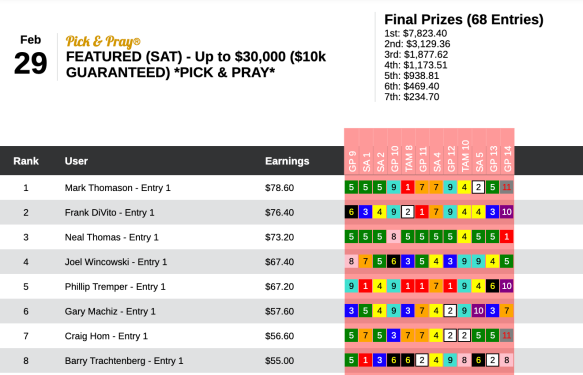 Thomason recorded four wins and another four places to earn top money of $7,823 in Saturday’s $10,000 Guaranteed Pick & Pray, which closed with a pot of $15,646. All four of Thomason’s winners came at Gulfstream (out of just five Gulfstream opportunities).

David Brown and John Melting will be headed to Vegas for the Horse Player World Series later this month.

Not only is their $1,500 entry covered, so is their room and $500 of their travel expenses…since this was a full-package qualifier. Another such “full scholarship” HPWS qualifier comes next Saturday.

While David Brown and John Melting were prospering in the 70s, Bryan Millang and Len Hanson made themselves upwardly mobile by living in the 80s.

Millang had five winners and Hanson weighed in with 6 wins plus a place to capture $4,000 packages in Saturday’s Keeneland Grade One Gamble qualifier. 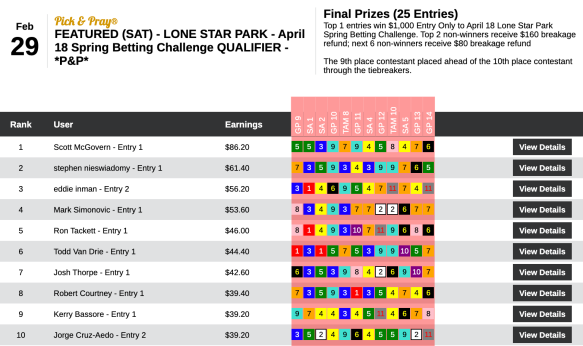 Scott McGovern designated himself as the first $1,000-entry winner thanks to his 4 firsts and 2 seconds, which allowed him to report home in front by $24.80.

While Lone Star offered a first chance, Aqueduct offered a last chance…for its Gotham Challenge this Saturday, and six players took advantage of it. 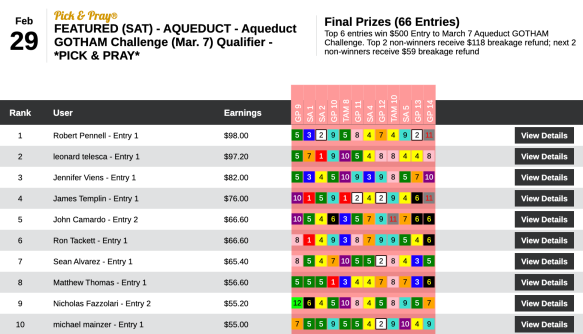 Congratulations to Robert Pennell, Leonard “Hubble” Telesca, Jennifer Viens, Jim Templin, John Camardo and Ron Tackett…each of whom will be heading to Ozone Park (or NYRA Bets) on Saturday with paid-up $500 entries.

Robert Pennell stayed on a winning track on Sunday. 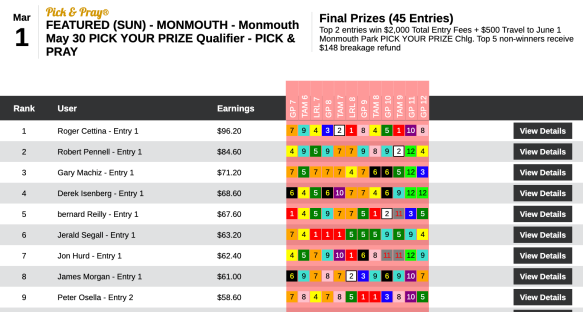 He didn’t exactly win, mind you, but he ran a good second behind NHC Hall of Famer Roger Cettina—so both Cettina and Pennell earned $2,500 packages to the popular Monmouth Pick Your Prize tournament on June 1. Both had Tom Terrific at 10-1 in the 8th at Laurel.

Remember that crack I made a little bit ago about Sally Goodall clearly slipping? I think I need to edit that out.

Goodall had 26-1 Gulfstream victor Areyoutalkingtome en route to a $32.00 triumph in our guaranteed qualifier to The BIG One on Sept. 19-20 at Laurel, where she will be one of no more than 57 in the field divvying up cash and a total of 15 NHC/BCBC/Pegasus/HPWS seats. 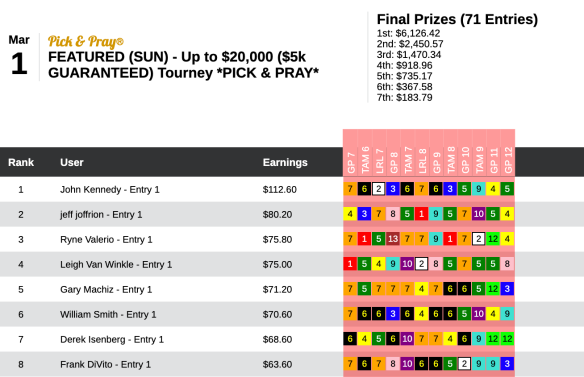 We also had a $10,000 Big Bucks tourney on Sunday, and it had a result that, in a way, was quite surprising. 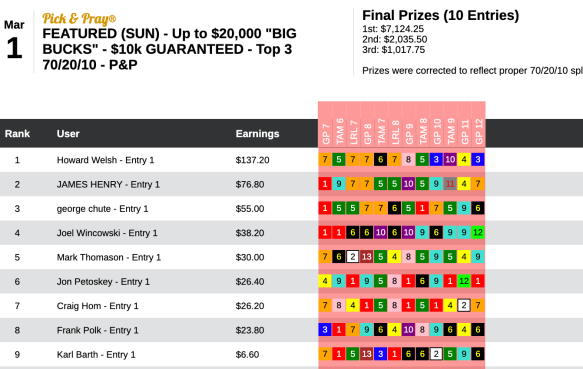 It’s not often that you see the day’s highest featured-tourney score come in a 10-person tournament…but that’s what happened here as Howard Welsh (4 wins, 4 places) absolutely blitzed his opponents to capture the grand prize of $7,124 by more than $60.00 on the scoreboard. Here’s a look at his formidable scoresheet: 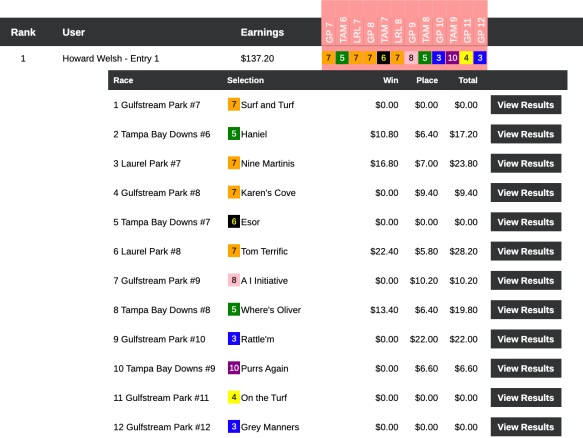 On Sunday we had a first chance/last chance/only chance (sounds like a Barry White song) qualifier to next weekend’s Club Hawthorne OTB contests.

There may have been only one chance to qualify here, but Steve Simonovich (4 wins, 2 places) will have two chances to win now that his $800 in entry fees are paid up. All four of Simonovic’s victors came consecutively—in tourney races 7-10.

A last chance (but not the first or only chance) opportunity also took place Sunday in the form of our TSG Ultimate Betting Challenge qualifier.

There were two winners here as Paul Cush (6 winners) and Gary “Macho Man” Machiz each walked away with $3,500 packages that can be redeemed either at Gulfstream, Santa Anita or xpressbet.com this Saturday. Good luck!

There wasn’t a whole lot of drama in Sunday’s $1,000 Guaranteed Exacta tourney.

Jim Lisowsky connected on exactas in three of the first four tourney races—topped by a devastating $258.90-for-$1 hit in the Areyoutalkingtome race at Gulfstream. That added up to a first prize award of $842 for Lisowsky. 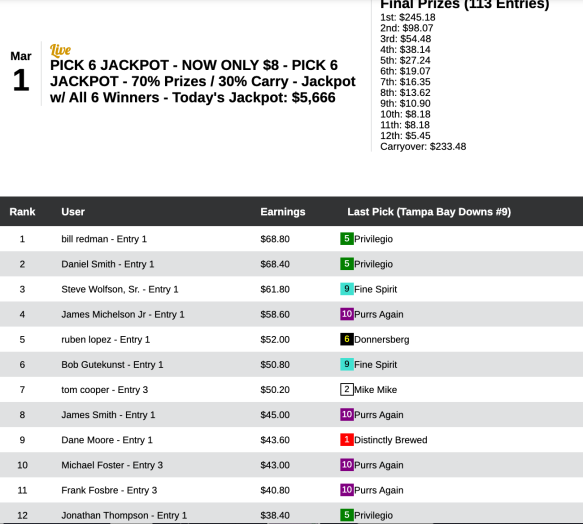 It’s really doubtful that Red Man chewing tobacco could fairly lay claim to being America’s Favorite Chew given the seemingly wider popularity of…gum. What isn’t doubtful is that there will be another nice Jackpot available next Sunday ($5,899) since no one got all six races right last Sunday.

I know that Stephen Thompson has been doing a lot of winning lately…because I’m running low on bad undertaker puns. He picked up a little over $2,000 for finishing 14th in the Flo-Cal–and let’s just say that the Lebanon, Penn., funeral home director laid out his opponents with 3 wins and 2 places to make off with Sunday’s BCBC entry, which is worth $10,000 (about the same price as that of a funeral).

That will do it with what we hope you’ll agree was an extra exciting weekend here. We’ll be back tomorrow (Tuesday) when we’ll hear from our Flo-Cal Faceoff winner, Thomas Blosser.