For what was sort of a quiet, “in-between” weekend on the racing calendar, things sure were busy around here. We had 24 featured events on Friday. Saturday and Sunday. In the process, next weekend’s $100,000 Guaranteed Flo-Cal Faceoff transformed into the $106,000 Flo-Cal Faceoff as we blew past the guarantee. That purse will continue to grow, of course, as we conduct our final qualifiers this week. We also offered several All Optional Live tourneys on Saturday and Sunday. As usual, however, Friday belonged to Pick & Prays.

Happily for Donnelly, he played those same picks in Friday’s $75 NHC qualifier at HorsePlayers.

Also getting an early NHC seat here was Mike Ferrozzo (5 wins, 1 place). Both Donnelly and Ferrozzo had Encountress. In fact, the top 37 finishers (and 63 entrants overall) out of the field of 386 had the 22-1 shot.

The Oscar for Best Supporting Handicapper on Friday went to Stephen Thompson.

The Lebanon, Penn., funeral home director received this prestigious distinction not just for earning a pair of contest seats in Friday qualifiers…but by doing so via second-place finishes in both events. In our Flo-Cal Faceoff qualifier, Thompson finished ahead of all but Joe Johnson. The third- and fourth-place finishers—Lawrence Kahlden and Steven Meier—also picked of $1,500 entries to next Saturday and Sunday’s Faceoff.

Here he finished second to Josh Thorpe who had five firsts and two seconds. Thorpe and Thompson will both be headed to Vegas on the last weekend in March for the “March Major” at The Orleans.

One was Joseph “38th” Parella, who had three wins and one place overall to pick up the coveted $10,000 entry. The other was runner up Frank Story who received a $5,000 partial BCBC entry.

On Saturday, with All Optional Live tourneys kicking in, Friday’s “double bridesmaid” Stephen Thompson was back where he apparently liked to be…in second place! 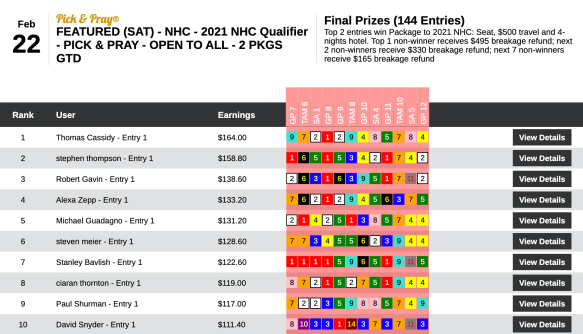 Not that Thompson’s complaining! The affable on-air personality Tom Cassidy punched his ticket to the next NHC thanks to 6 wins (including three at odds of 29-1, 14-1 and 14-1 again)…and so did Thompson for yet another extremely productive runner-up effort. Here, Thompson recorded 4 wins—three of which reported home at 13-1, 29-1 and 14-1.

That NHC qualifier was a traditional 12-race Pick & Pray. The day’s (and weekend’s) richest tourney was Saturday’s All Optional Live $15,000 Guaranteed cash tourney. Stephen Thompson was way out of character in this one.

He won! Thompson showed versatility across formats by recording one additional winner (5) in two fewer races/plays (10). It added up to a payday of $9,088 in a game that ended up with a pot of $18,177. It also brought Thompson’s cash winnings for the month of February up to $19,856 since he also won our $23,930 cash tourney on February 1.

There were 12 weekend winners (four each day) of $1,500 Flo-Cal Faceoff entries.

Saturday’s quartet was Jeff Bussan, Marc Racenstein, Daven Turner and Mark Wilgard. They will all be tackling the full cards at Gulfstream and Santa Anita next Saturday and Sunday in hopes of taking home a piece of a purse that will be at least $106,000 (including Day Money prizes each day).

But his three winners certainly made up for that, coming home at odds of 13-1, 14-1 and 36-1. That got him first place by a comfy margin of $53.00 in Saturday’s Horse Player World Series Full Package qualifier. Well back in second—but also garnering an entry/hotel/travel package to the HPWS—was The People’s CFO, Joe “JK” Koury.

The Gotham Challenge is coming up at Aqueduct on March 9.

James Michael will be there after recording a $29.00 victory in Saturday’s Big A qualifier. So will the silver and bronze medalists, Leonard “Hubble” Telesca and Togo “Cup” Travailia.

Chris Cupples had 4 winners and hit 3 of his final 5 plays to check in first in All Optional Live Keeneland Grade One Gamble qualifier.

Cupples was leading going into the last race, but got passed late by Joe “Cosmo” Kramer when 14-1 Almashriq won the 12th at Gulfstream. You can’t accuse Kramer of stabbing at a last-race longshot, though, as Almashriq was apparently part of Kramer’s plan all along. 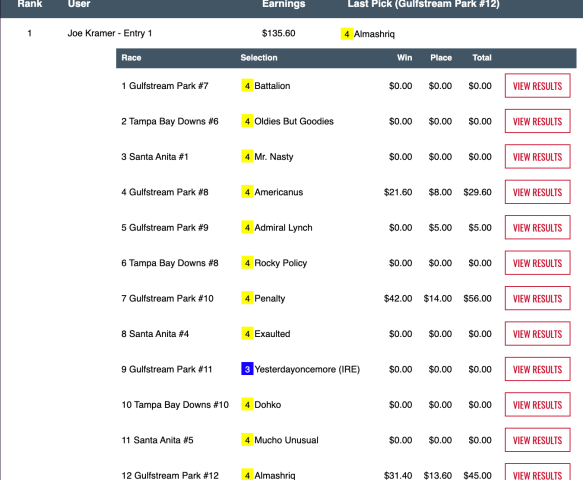 We saw a few players good naturedly sporting yellow and black “Fourgate” t-shirts at the recent NHC. Perhaps we’ll see the same at this year’s BCBC. (And for those of you wondering…yes…there was no 4 horse in the one race that Kramer went with a 3.)

Despite the fact that she only occasionally selects the number 4 horse, no one has been hotter of late than Alexa Zepp. She won multiple tourneys here at HorseTourneys over NHC weekend, she added a BCBC seat the following weekend and Zepp rambled on with another celebration day this past Sunday.

Here, it was a $50.90 triumph—good for a $3,500 package to the TSG Ultimate Betting Challenge on March 7. Zepp really gave no quarter to her foes in this one, posting the day’s high featured-tourney score—a 10-play tour de force that included both a 68-1 winner and a 40-1 winner. 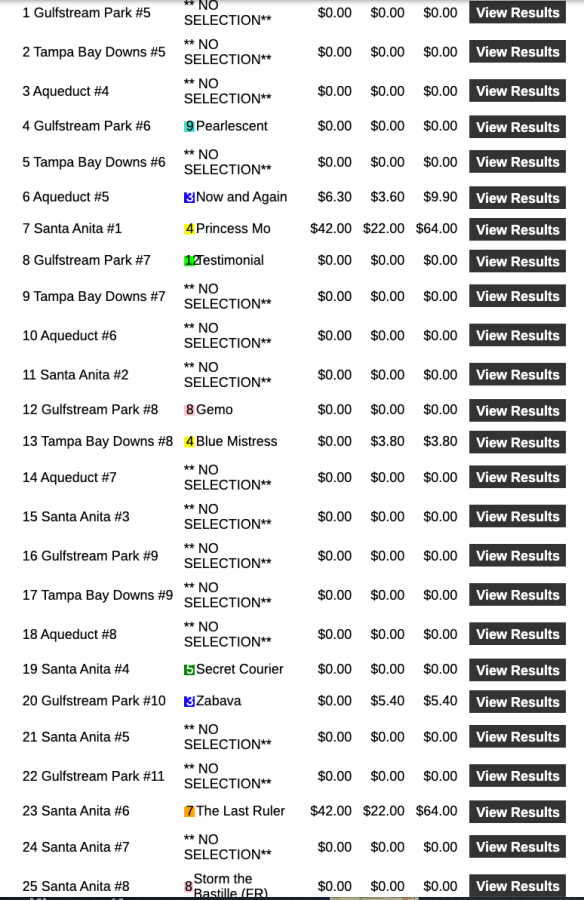 His tally of $136.40 led a parade of four winners that included David Joy, Adam Lewis and Joe Koury in Sunday’s Horse Player World Series qualifier. For Koury, it was his second HPWS win in as many days.

We offered a Low Ratio Flo-Cal Faceoff qualifier on Sunday and as with the “regular ratio” qualifiers on Friday and Saturday, the competition yielded four winners. 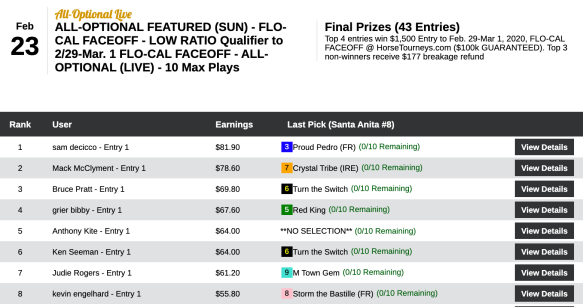 Sam DeCicco (1st), Bruce Pratt (3rd) and Grier Bibby (4th) all had The Last Ruler (40-1 in the 6th at Santa Anita) as their chief scoring contributor. Mack McClyment missed that one but hit several other very nice priced winners to take second and get a $1,500 Faceoff entry of his own,.

In All Optional Live qualifiers, a common strategy seems to be to save plays for the end so you can see what type of score you need to prosper. Allan Sadler didn’t bother with any of that on Sunday.

Compared to Sadler, Michael Somich took an opposite approach to success.

Somich whiffed on his first eight picks, but he connected on 40-1 (The Last Ruler) and 3-1 winners with his last two, and that got him up to win our 17-person qualifier to The BIG One. Somich receives an all-inclusive package to the Sept. 19-20 tournament that will have a field of no more than 57 (53 qualifiers plus up to four buy-in entries).

G.T. Nixon had basically the same day as Somich.

He went zero-for-eight, then hit 40-1 and 3-1 shots to enter the winner’s circle of our Monmouth Pick Your Prize qualifer, Runner up and fellow $2,500 package winner Peter Osella had five firsts and one second…and like Nixon, he had Proud Pedro (3-1) in the final race to secure his path to the Jersey Shore.

He had Ballie’s Dream in the very first contest race, the 5th at Gulfstream. That winner returned $33.80 and $10.60. Hagaman added two more winners and three places from there to nail down the $4,000 Keeneland package.

Craig “There’s no place like” Hom has been specializing in big-ticket scores of late. The highly-skilled player cashed for $11,597 in a $25,771 game on February 15. Eight days later, Hom struck again.

Hom recorded three wins and four places in our $10,000 Guaranteed Big Bucks tourney to add another $7,124 to his coffers. Gary Blair was the only other competitor to show a flat-bet profit—and was rewarded with a 2nd-place prize of $2,035 for his troubles.

Elizabeth Canning had three winners in our $1,000 Guaranteed Exacta tourney…but one of them did almost all of the heavy lifting for her.

As fate would have it, that Princess Mo race also happened to be the first race in Sunday’s $8 Pick 6 Jackpot tourney.

None of the tourney’s 103 entrants had Princess Mo—which automatically triggered a Jackpot of $5,665 for next Sunday. “The Commissioner” Tim Smith did the best job of everyone “post-Princess Mo”.

Maybe Ken Seeman and Kevin Engelhard should have played in the $8 Pick 6 Jackpot game. 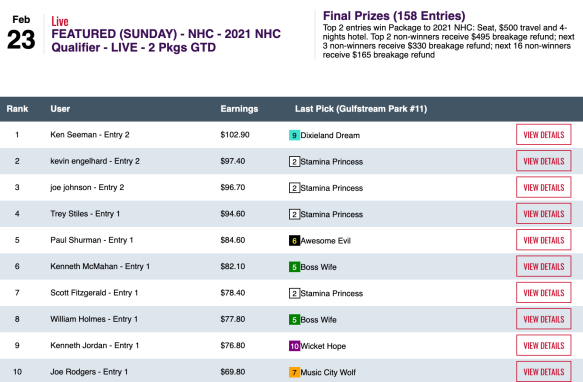 Instead, they’ll just have to settle for NHC seats. They both had Princess Mo en route to comparable 3-win, 2-place days in Sunday’s “regular qualifier at HorsePlayers.

Add Thomas Murphy’s name to the list of those who were on the right side of the Princess Mo photo.

The 68-1 shot helped Murphy dropkick his foes and win by $33.80 in Sunday’s Breeders’ Cup Betting Challenge Pick & Pray at HorsePlayers.

Before we go, we want to remind you about our new “Points Based” tourneys. We’ve been offering “free samples” of these lately to get people used to the 100-50-30 scoring method for firsts, seconds and thirds. Bonus points are also awarded to win and place horses based on their parimutuel payouts.

Steven Orden seems to already have a hang for these games.

And perhaps he, too, should consider signing up for this week’s $8 Pick 6 Jackpot tourney. We know he has the funds in his account to cover it!

Have a great week. Hope to “see” many of you at the Flo-Cal.