It was a four-day weekend stuffed with 27 featured tourneys—and even two holidays. The first of those calendar signposts was Valentine’s Day. And though their link was purely circumstantial, Sally Wang Goodall and Eric Boyd were quite the pair on Friday.

Goodall and her 4 wins and 2 places showed the way in Friday’s Horse Player World Series entry-only qualifier. (A full-package entry would have been overkill for the Las Vegas resident, who can drive her own car and sleep in her own bed while playing in the HPWS.) Joining Sally in the big Mardi Gras ballroom will be G.T. Nixon, who won a pair of $1,500 entries for running second and third behind Goodall. Nixon had four first-place finishers on each of his tickets—three of them common across both entires.

Goodall wasn’t done. An even more exciting victory—at least from a historical standpoint—was her triumph in Friday’s $75 NHC qualifier at HorsePlayers.

The win meant that Goodall will be participating in a record 19th NHC when the 22nd renewal of the big event takes place next year. The pressure is now on 18-time qualifiers Paul Shurman and Trey Stiles to match her. Fortunately for the NHC Hall of Famers, they each still have a lot of time to do so.

Finishing second to Goodall—and also earning an early 2021 NHC seat—was runner up Eric Boyd. At this point, it was as though Goodall said to Boyd, “I got the one I really wanted…you take over from here.” Because that’s exactly what Boyd did.

He improved upon his NHC qualifying score to capture a $10,000 Breeders’ Cup Betting Challenge entry in Friday’s Low Ratio qualifier.

It’s nice to see one’s tournament dance card fill up so early in the year. Though that certainly means that there will be some expenses along the way. Boyd took care of those quite nicely in Friday’s $7,500 Guaranteed Pick & Pray. 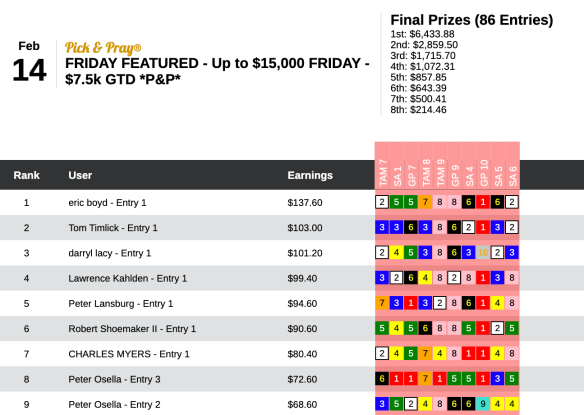 Boyd’s five winners—at odds of 4-1, 7-2, 7-1, 10-1 and 16-1—plus a place earned himself the top prize of $6,433 in the nearly-sold-out-tourney which finished up with a purse of $14,297. All things considered, it was roughly a $23,000 day for Boyd. Ironically, the only Friday featured tourney he didn’t get a piece of was the qualifier for the Horse Player World Series—which is hosted by Boyd Gaming.

The single biggest prize available in any of our weekend tourneys came on Saturday in our $17,500 Guaranteed cash game.

Craig “There’s no place like” Hom pocketed this one thanks to his four wins and two places. Things started slowly for Hom, but he caught a second wind late and cashed in the final four races to pull down the top money of $11,597 in a game ultimately worth an overall total of $25,771. 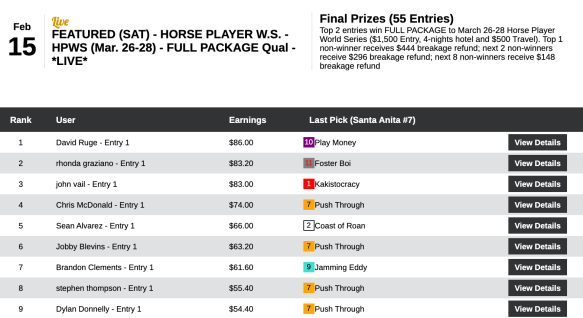 David “Bleu, Blanc et” Ruge (3 wins, 3 places) got up to first place thanks to a $10.00 place collection in the final race. “Rockin’” Rhonda Graziano (3 wins, 1 place) held second by a slim 20-cent margin to secure the other full scholarship to The Orleans. Her three wins—at 9-1, 10-1 and 3-1—came consecutively. The “hard luck loser” of the tourney was John Vail…but don’t feel too sorry for John. He came into this event off a second-place finish behind Thomas Goldsmith in the NHC—an effort worth $250,000!

Saturday offered the year’s first qualifier to the March 7 Gotham Challenge at Aqueduct.

Thomas Holland whiffed on the first three races and the last three, but in between those misfires, he accumulated four winners and a runner up to finish first and capture one of the two available $500 entries. The other went to Marc Stateler who booked three firsts and two seconds.

It felt like a Grade One field in Saturday’s qualifier for the Keeneland Grade One Gamble. 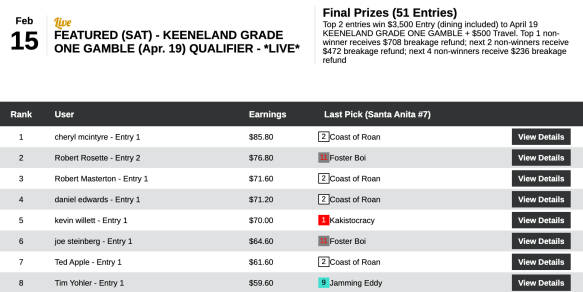 The winner was 2016 NHC Tour Champion Cheryl McIntyre, who posted a pair of winners and a quartet of runners up. McIntyre’s win would not have been possible without her selection of Coast of Roan ($13.60, $6.60) in the final tourney race. Also earning a $4,000 package to Blue Grass country on April 19 was Robert Rosette—a name that will appear again in this recap.

Another name that will appear more than once in this summary is that of Neal “Let’s Go” Metzger. 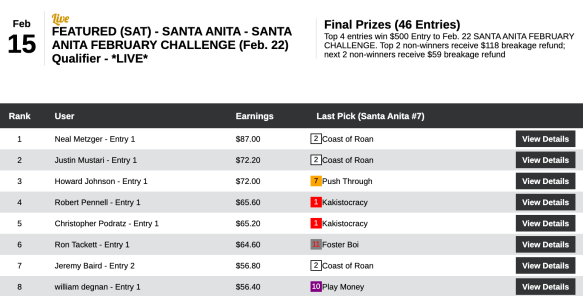 Metzger got his weekend started with a victory, worth a $500 entry, in our next-to-last qualifier to next Saturday’s Santa Anita February Challenge. Competing against Metzger in Arcadia will be Justin Mustari, Howard Johnson and Robert Pennell…who was the Jimmy Nace NHC Tour Rookie of the Year in 2019.

The song remains the same for Alexa Zepp.

After a big weekend playing online here during NHC weekend, Zepp sent another bustle through the hedgerows of her opponents in capturing Saturday’s Breeders’ Cup Betting Challenge qualifier at HorsePlayers. Here is a look at her Saturday scorecard: 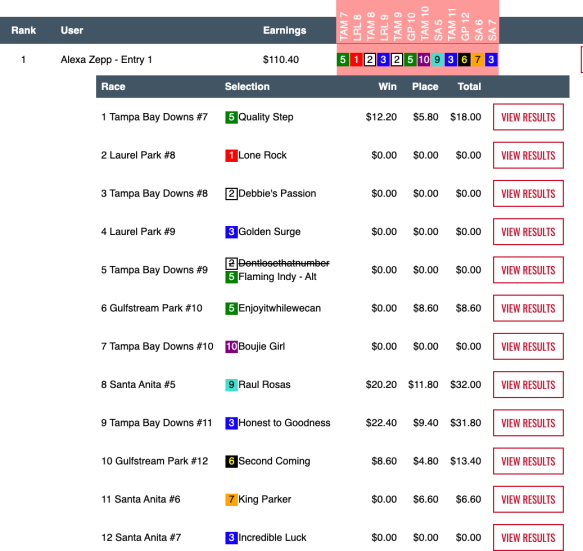 Sunday wound up being a chalky day at the races—at least with respect to the 12 contest races in our featured events—and that made things interesting on a couple of different levels.

Travis Pearson not only had the day’s longest-priced winner, he also had the day’s highest returning horse (which was an altogether different runner). 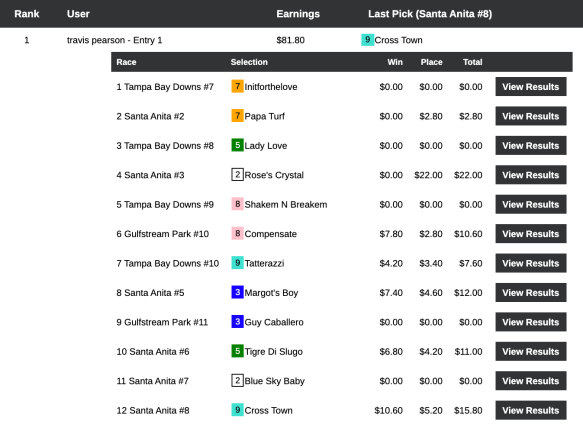 But that was enough to earn Scott (3 wins, 3 places) an all-inclusive berth to The BIG One on September 19-20 at Laurel, where cash and 20 top-tournament seats will be spread across a field of no more than 57.

Remember how we said things were chalky on Sunday? That made things extra interesting in our $8 Pick 6 Jackpot tourney. 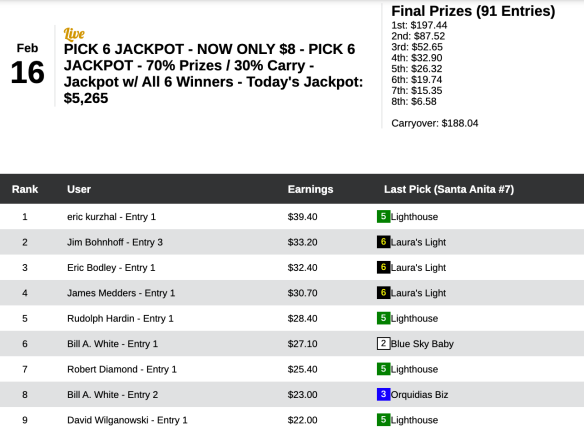 Eric Kurzhal swept the first four races, putting himself two-thirds of the way home to a Jackpot of $5,453. He missed the fifth race of the sequence, however, when he opted for a 9-2 shot rather than the victorious 2-1 favorite. (Insult may have been added to injury when the final race was won by the prohibitive 2-5 favorite.)

At any rate, it made for an exciting “follow along”…and $5,453 will be awaiting those with a desire (and $8 in their account) next week.

Matthew Baca took advantage of the one juicy exacta that was out there on Sunday.

There were enough entries in Sunday’s Keeneland Grade One Gamble Low Ratio qualifier to award a pair of $4,000 packages.

Congratulations to Jerald Segall who had 4 firsts and 2 seconds, and Togo “Cup” Travailia, who picked 5 winners and 2 second-besters.

Dan Wilde, Chuch LeFevre, Wendy Long and John Standiford are all heading to Vegas next month.

They each picked up $1,500 entries in Sunday’s Horse Player World Series qualifier.

Fay nailed the first three winners en route to a 6-win, 1-place day—good for a $3,500 package to the Gulfstream/Santa Anita/Xpressbet competition.

Fay was also one of five Sunday winners of $1,500 entries to the $100,000 Guaranteed Flo-Cal Faceoff, taking place later this month right here at HorseTourneys.

The other four Flo-Cal seat winners were George “Ki” Bosch, Paul Shurman (looking for an unprecedented Spa & Surf Showdown/Flo-Cal Faceoff double), Thomas Nola and Stephan Gravina. Fay, Bosch, Nola and Gravina would also be accomplishing unprecedented feats should any of them win the Flo-Cal Faceoff…since the Faceoff has never taken place before.

Sunday was the first opportunity for players to win a $2,500 package to the Monmouth Pick Your Prize tournament on June 1.

It was G.T. Nixon (winner of not one but two HPWS entries on Friday) who made the most of that opportunity. Nixon recorded 5 wins and 3 places to secure his spot at the Jersey Shore.

Over at HorsePlayers, Bob Gianquitti and Michael Kavana continued their recent hot runs by each picking six Sunday winners.

That added up to NHC berths for both. Nice to have that box checked off this early in the year!

Corey Lonberger was one of several Sunday winners who saved the best for last.

Lonberger had “longshot” Cross Town ($10.60, $5.20) in the 8th at Santa Anita to get up and win the day’s Breeders’ Cup Betting Challenge qualifier at HorsePlayers.

Presidents Day saw some earlier weekend names put their names back in the win column.

Rosette added to his booty in Monday’s Flo-Cal Faceoff qualifier.

So make it $8,500 worth of seats won by Rosette in just three tourneys on Saturday and Monday. Joining Rosette in the Flo-Cal field (tasked with focusing on full cards from Gulfstream and Santa Anita on Feb. 29-March 1) will bee Michael Caposio, Turner West, Garry Addley and Robert Iacono. 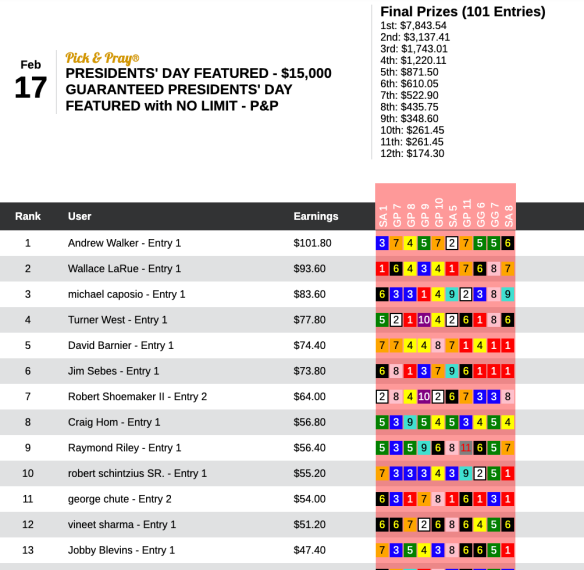 No one had Scarto in our Last Chance qualifier to this Saturday’s Santa Anita February Challenge. That left the door wide open to all.

The four who got their way through that door were Turner West (also a Monday Flo-Cal winner), Robert Schintzius, Jr., Edward Reidy and Michael Kavana (a Sunday NHC seat earner).

We’ll have to wait until May for the next national holiday on the calendar (Memorial Day). Despite the upcoming dry spell of extended weekends, however, there will be no shortage of action here. We’ll just pack it all into our traditional weekend schedules—most notably, perhaps, with our big Flo-Cal Faceoff weekend just 12 days from now.

Whether you were playing—or just reading—thanks for being a part of our Valentine’s/Preisdents Day weekend.