With NHC week now upon us, it’s no shock that eight final online spots and 24 Last Chance Tournament berths were awarded this past weekend. It was all part of a weekend that saw some excellent individual performances and (especially on Sunday) some fantastic finishes. The weekend winning got off to a quick start on Friday when a classic winner earned a spot at the place of his greatest triumph. 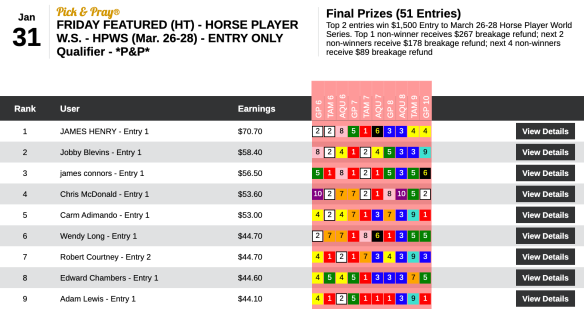 James Henry won the 2013 Horse Player World Series and on Friday, he picked up a $1,500 entry to the 2020 event thanks to four wins and a place. His big horse was Cholla ($13.60) in the 7th at Tampa. Joining Henry at The Orleans will be Jobby Blevins (3 wins, 2 places), who also did his best work in the 7th at Tampa, though with a different horse. Blevins’s biggest cash was with 7th race runner up Alydarius who returned $24.20 to place at the track…and $22.00, of course, here at HorseTourneys.

Rick “I-65” Broth earned $6,400 here from a final pot of $12,801 thanks to four firsts and one second. Unlike in his 2019 Kentucky Derby Betting Championship victory, Broth did NOT find out he won this competition while pulled over in the breakdown lane of a major U.S. interstate.

It was a blanket finish in Friday’s Flo-Cal Face-off qualifier. 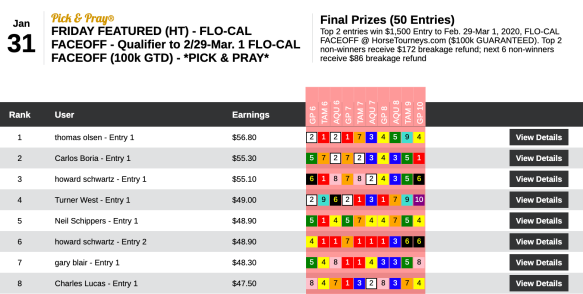 After the placing judges reviewed the photograph, it was determined that Thomas Olsen (5 wins, no places) and Carlos Boria (3 wins, 1 place) would earn the right (worth $1,500) to face the starter in the $100,000 Guaranteed Faceoff on February 29-March 1. Olsen had the winners of the final race to claw his way to the top over Boria, who held second by just 20 cents. Similar to Jobby Blevins, Boria’s biggest collection came not with any of his winners but with the $22.00 he received from Alydarius running second at Tampa.

Twenty-four people won $500 entries last weekend to Thursday’s Last Chance tournament at Bally’s. Ten of them did that winning on Friday. 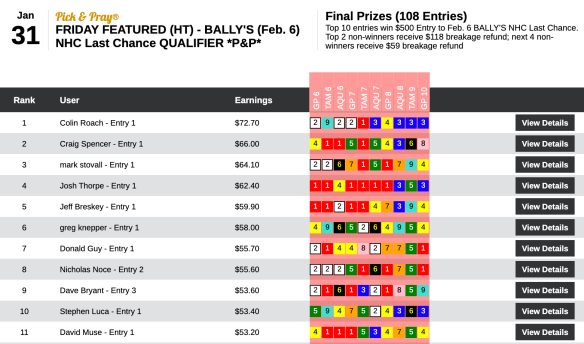 The first of the final eight online NHC berths for 2020 went to Mike Coutu over at HorsePlayers. 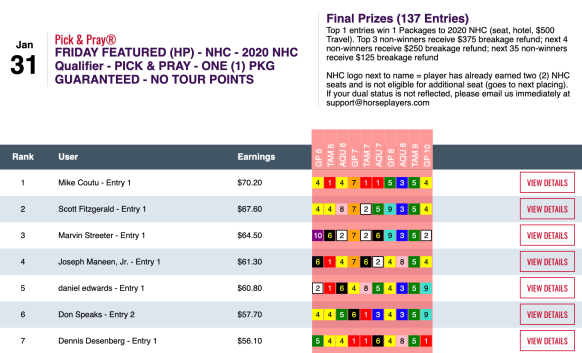 Two more NHC play-ins were conducted at HorsePlayers on Saturday. The one that was open to all comers featured some dazzling consistency by winner Jim Murphy. 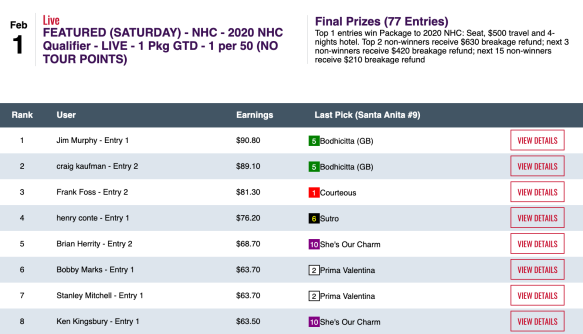 Murphy connected on eight winners and another two runners up to finish with 10 cashes out of 12 races. Here’s how his day went: 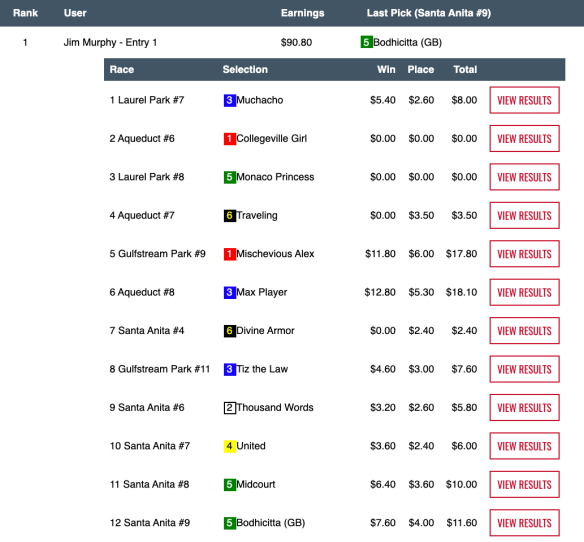 In the other Saturday NHC qualifier—a Low Ratio event restricted to those who had yet to earn a 2020 spot—the “Bally’s Berths” went to the two who scored in the 80s. 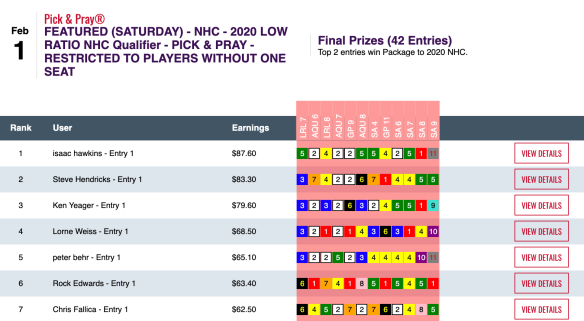 Those two savvy players were Isaac Hawkins (4 wins, 3 places) and Steve Hendricks (5 wins, 3 places). Hendricks hit the last three races of this Pick & Pray at odds of 4-5, 2-1 and 5-2 to secure his last-minute NHC berth. (It’s always interesting to track how Last Chance tourney qualifiers and other “late to the party” types do at the NHC. They can be dangerous with that adrenaline coursing through their body!

Saturday’s high score was turned in by Stephen “The Undertaker” Thompson in our $15,000 Guaranteed Pick & Pray. 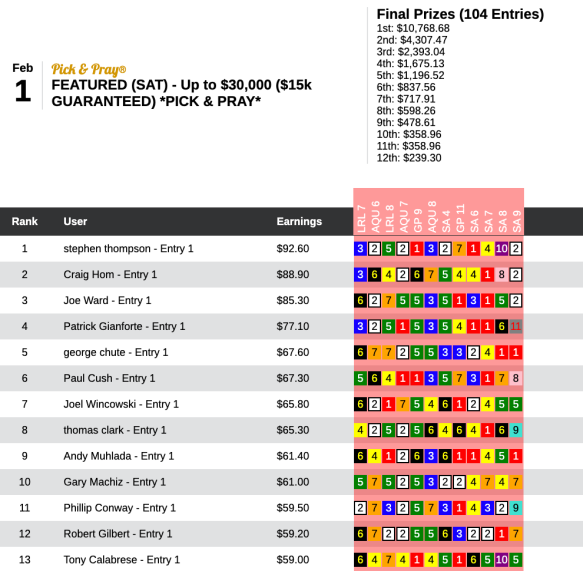 Thompson buried his opponents early on with five winners out of the first six races. One later winner administered the Last Rites to Thompson’s opponents and earned him $10,768 from a robust final purse of $23,930.

…and that led him to a 6-win, 1-place day—and a $4,000 package in our Keeneland Grade One Gamble qualifier. Also earning a package was Rick Vasquez who pulled a “Jim Murphy” by collecting 10 times (on 4 wins and 6 places). Those places made a big difference for Vasquez, who retained second place by just 80 cents.

Cush, meanwhile, played his Keeneland picks back in our first qualifier to the February 22 Santa Anita February Challenge.

Wise move! Cush picked up a $500 Santa Anita entry here along with second-place finisher Stephan Gravina (who has done a lot of winning around here lately). Gravina (4 wins, 3 places) had Bodhicitta ($7.60, $4.00) in the final tourney race, the 9th at Santa Anita, to get himself up and into the money.

As in the Low Ratio NHC Maiden Special, a score of $80.00 was what it took to reach the winner’s circle in Saturday’s full-package Horse Player World Series qualifier.

That hurdle was cleared by Tim Averill (3 wins, led by the day’s longest priced winner, 7-1 Aqueduct Race 7 hero Freedom Prince, plus five places) and Gregory Lewis (4 firsts, 3 seconds). Averill and Lewis, thus, receive not just $1,500 HPWS entries, but four nights at The Orleans plus a $500 travel credit deposited into their HorseTourneys accounts,

Perhaps the exciting finish to the featured-tourney action on Sunday foreshadowed the Chiefs big comeback later that day in the Super Bowl. (Or perhaps not.) In any event, there were some last-race fireworks that, among other things, sent some people packing for the NHC and left others to remain home.

Things weren’t looking good for Luke Peltz (4 wins, 3 places) and Henry Conte (4 wins, 2 places) with just one race left in our regular, last-chance NHC Pick & Pray. They were on the outside looking in and had to pin their hopes on a 55-1 shot, Broadway Peggy, in the finale, the 11th at Gulfstream.

However, Broadway Peggy got up for second behind a runaway victory by the favorite, and the resulting $37.20 place mutuel ($22.00 for contest purposes, of course) elevated Peltz and Conte up to first and second, respectively. So “Broadway” essentially wound up sending the two of them to “The Strip”.

The Gulfstream runner up bomb did not factor into the outcome of the other NHC Last Chance tourney on Sunday…the Low Ratio play-in at HorsePlayers. 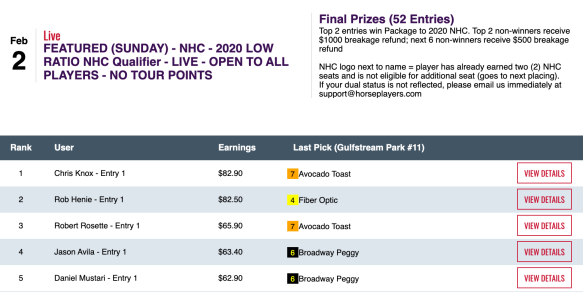 It was tight at the top between Chris Knox (2 wins, 4 places) and Rob Henie (5 wins, 2 places). But this was a two-seat qualifier and those two drew clear of the rest to capture two of the last available NHC seats. 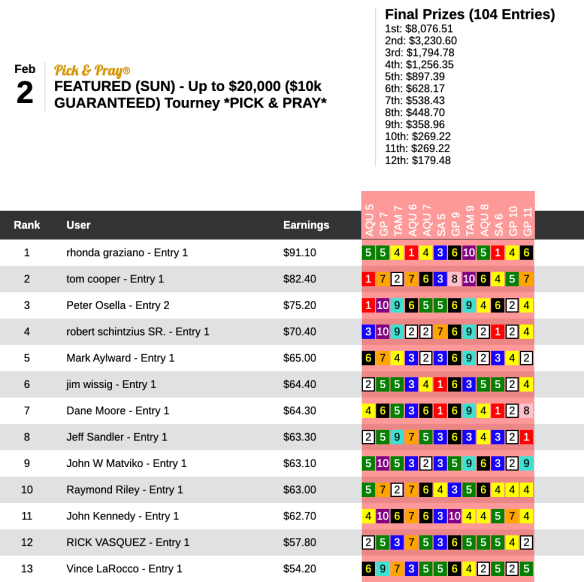 Added onto four earlier winners, Broadway Peggy’s place return shot Graziano to the top of the leaderboard. The result was a payday for her of $8,076 from a final overall pot of $17,939. 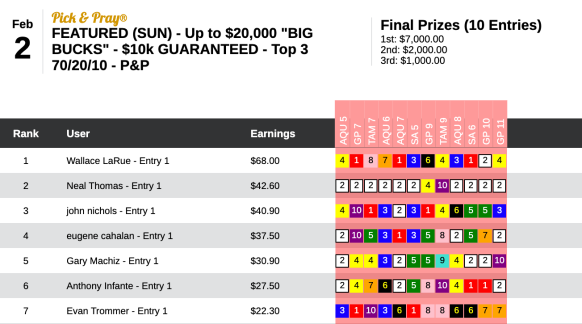 Wallace LaRue (5 wins, 2 places) did not have Broadway Peggy…but he did have the 2-1 winner of that race (Fiber Optic) plus the winner before that (also at 2-1) to vanquish his nine rivals and take down the first prize of $7,000. Giuseppe Patrella may be partial to pasta rather than escargot, but next September he will have the opportunity to dine on crab cakes.

He had just two wins and a place and a score of just $56.60…but that score was big enough to earn him an all-inclusive package to The BIG One next September 19-20 at Laurel.

The weekend’s most prolific winner, without a doubt, was Tom Cooper.

Cooper earned not one but two Flo-Cal Faceoff entries (worth $1,500 each) for completing his own uncoupled-entry exacta. Also earning a spot in the $100,000 Guaranteed, Gulfstream/Santa Anita-only competition was The People’s CFO, Joe “JK” Koury.

The picks on Cooper’s “good” entry was also “good” enough for a grand prize in our Horse Player World Series entry-only play-in. 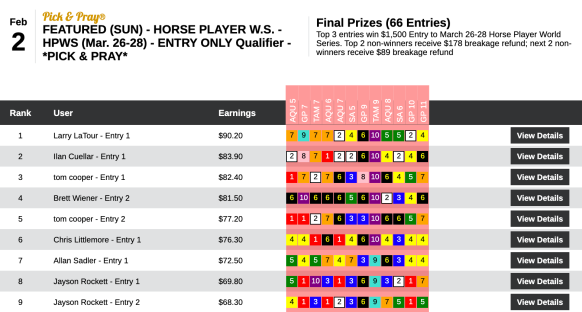 Cooper finished third behind fellow $1,500 HPWS-entry winners Larry LaTour (good day for the “La”s) and runner up Ilan Cuellar. LaTour had six winners, including each of the final three race victors.

Tommie Cooper may need one of those Tommie Copper wrist braces for all the high-intensity handicapping he’ll be doing this winter…because he’s also heading to the TSG Ultimate Betting Challenge. 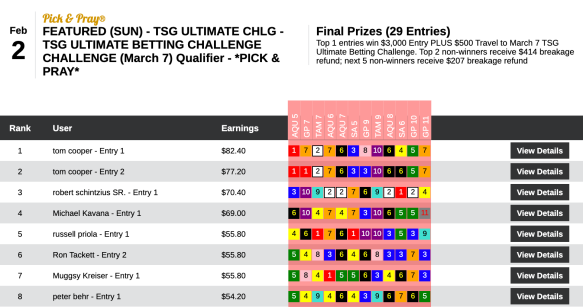 Yes, Cooper won this one as well with his $82.40 score. Cooper, the recipient of a $3,500 package here, has the option of playing from Santa Anita, Gulfstream or online come March 7 (just a week after the Flo-Cal Faceoff and three weeks prior to the HPWS). Four Pegasus seats, two NHC spots and two entries to the Santa Anita Derby Challenge are among the prizes expected to be offered in this event (based on 80 entries). 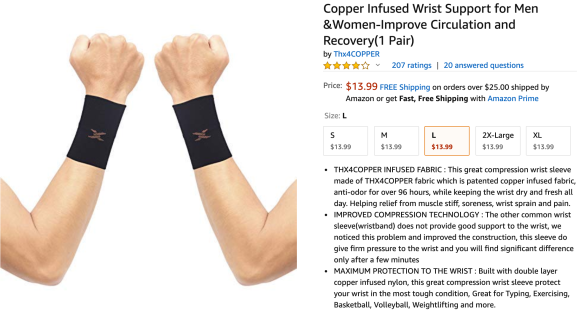 The NHC Last Chance tournament at Bally’s will probably be high intensity too. It will definitely be high occupancy. 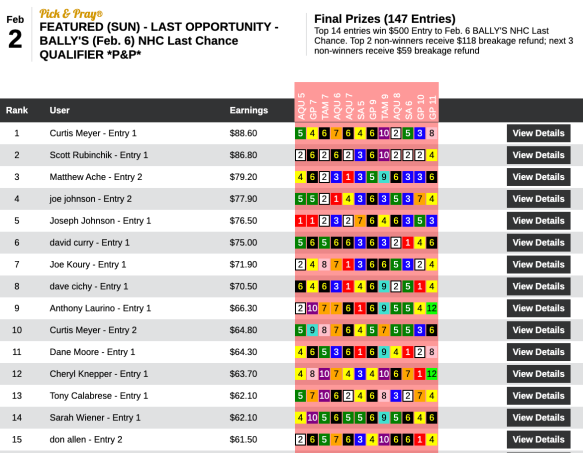 Unfortunately, Joey Johnson did not get his entry in on time.

Grier Bibby wasn’t tardy in entering our $1,000 Guaranteed Exacta tourney…and neither were his horses.

This was a tight one as Exacta tourneys go. Bibby kept chipping away with four successful three-horse boxes—all four of which paid in the fairly narrow range of $12.50 to $39.80 for a dollar. That got Bibby (by $6.75) the top prize of $918.

Bidding for his third consecutive Exacta tourney win, Jim Trepinski could do no better than 9th on Sunday. He was scoped after the contest and found to have bled. 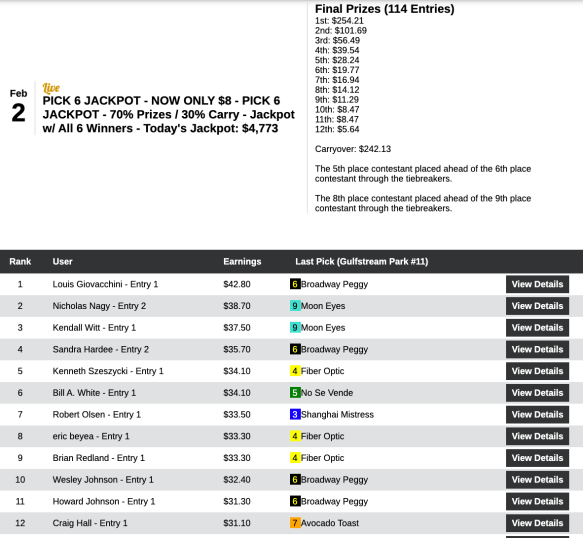 Giovacchini had two winners and one place (Broadway Peggy) to land the top spot. No one got all six races right, though—despite the six winners reporting home at odds of 3-5, 2-1, 1-1, 4-1, 2-1 and 2-1 (three favorites, two second choices, one third choice). Since no one swept the card, the Jackpot grows! Next Sunday, it will be $5,015.

Since NHC week is coming up, there will be no Weekend Preview or Weekend Recap next Thursday/Monday. (I’m sure this is not unwelcome news to many of you!). At any rate, I want to wish the very best of luck to all of you who will be competing out at Bally’s this weekend. I will be there, and I hope to see again—or meet for the first time—as many of you as possible. I’ll be sort of easy to spot on Friday, Saturday and Sunday. McKay Smith and Harry Furlong will be there as well. Come say hello!