When it’s a “live-format” weekend like last weekend was, the day most likely to provide notable individual performances is Friday…which is always reserved for Pick & Prays so some of you can keep your mind on your work. (Picking winners is nice, but those bi-weekly paychecks are sure things!) This, indeed, proved to be the case last Friday, courtesy of Ryan Flanders.

“Ryan the Lion” had four winners and two places out of 10 races to take home a $1,500 entry in our Horse Player World Series qualifier. Fortunately for Flanders, he decided to play in more than just one Friday tourney.

Flanders used his same HPWS selections to defeat all but Philip Edell (5 wins, 2 places) in Friday’s qualifier to the $100,000 Guaranteed Flo-Cal Face-off. Edell cashed in each of the final four races to get to the top spot. But there were enough entries to award a pair of $1,500 Flo-Cal berths, so second wound up being as good as first for Flanders.

The same Friday picks (and prayers) also landed Flanders among the eight to take home $500 entries to the NHC Last Chance tournament.

We mentioned in the headline that Flanders scored a Hat Trick—owing to the three first prizes that he won. He really did better than that because as consolation prizes go, $2,227 is pretty darned good. 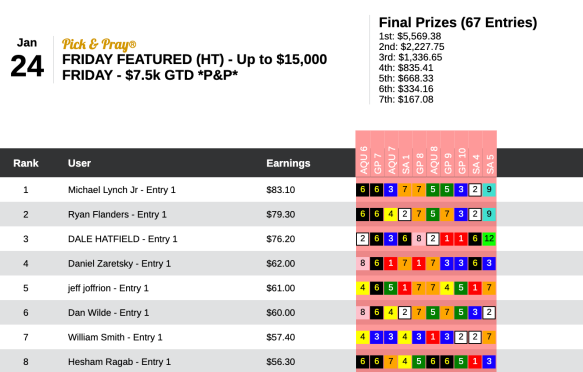 Of course, $5,569 is even better, and that’s what Michael Lynch Jr. earned for his victory in Friday $7,500 Guaranteed Pick & Pray, which closed with a total overall purse of $11,138. Lynch blasted straight to the lead in this one and improved his position from there, recording winners at 2-1, 15-1 and 5-2, and adding two more winners plus a place thereafter.

The one Friday feature that Flanders sat out was the $125 NHC qualifier at HorsePlayers. The decision made obvious sense since Flanders is already double-qualified…and it turned out to be good news for the rest of the NHC hopefuls. 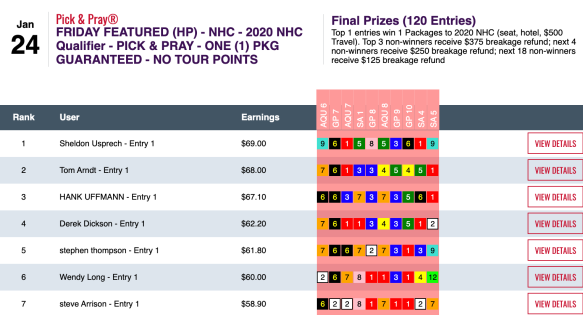 Sheldon Usprech was the one whose heart truly grew fonder due to Flanders’s absence. Usprech had 4 wins and a place to finish with $69.00 and prevail by a buck over Tom Arndt. Hank Uffman was just 90 cents further back in third. The big collection of the day for the victorious Canadian school administrator came early on with Tiz Possible Dear ($32.00, $8.40) in the 7th at Gulfstream.

There was no hogging of grand prizes on live-format Saturday. Five featured events yielded six first prizes and those were won by six different people, led by the day’s high scorer, Beau Alesi.

Alesi flaunted his handicapping acumen on Pegasus World Cup Day with four wins and three places in our full-package qualifier to the Horse Player World Series.

It took another big score ($150+) to capture the weekend’s richest event, our $17,500 Guaranteed cash tourney 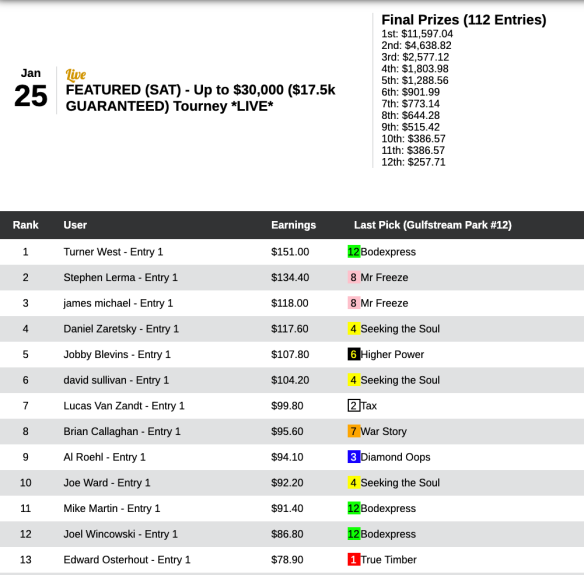 Turner West took the honors (and the $11,597 in cash) here thanks to five firsts and one second. West did particularly well on the Gulfstream turf scoring with Spooky Channel and Zulu Alpha.

Over at HorsePlayers, Brooks Schuler joined not only the Saturday winners club, but the Saturday $150+ club as well.

Schuler certainly didn’t play like a “maiden” in Saturday’s NHC qualifier restricted to those yet to win a 2020 seat. He picked seven winners—including six in a row at one point—plus two runners up. Here’s how his day went: 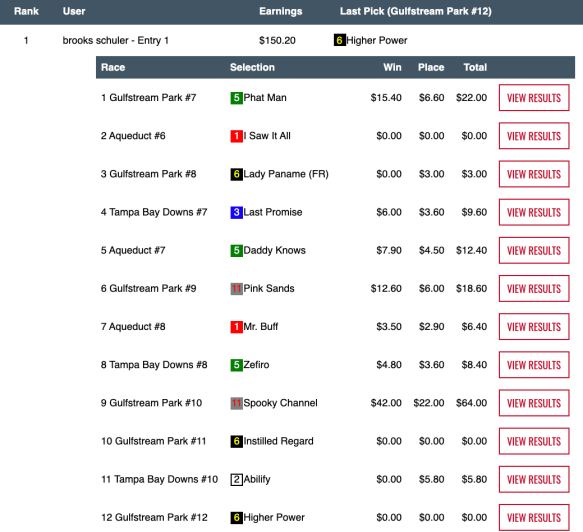 Scores were, unsurprisingly, a lot lower in the other NHC qualifier at HorsePlayers on Saturday. That’s because there were only 10 entries in it—an Ultra Low Ratio qualifier. 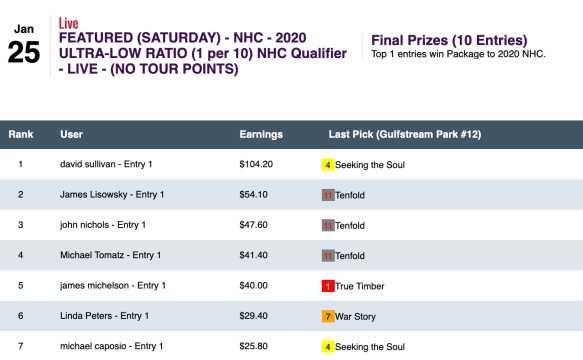 Nevertheless, David Sullivan left no doubt as to who was best in this one as he nearly doubled the score of his closest pursuer. Sullivan had just two winners (plus a place), but they were really good ones…cap horse Spooky Channel and Tampa 10-1 shot Centsless Drama.

One more Saturday winner to report back here at HorseTourneys…Al “Forward” Roehl.

Roehl was rocking with four winners and two places to pick up a $3,500 entry plus $500 for travel to the April 19 Keeneland Grade One Gamble.

It’s not often that the $1,000 Guaranteed Exacta tourney draws top billing in our Sunday recap, but that’s the case this week thanks to Jim Teplinsky.

He won this event for the second straight week. And for the second consecutive week, he reeled in a big one that did most of his damage. Last week, he did almost all of his scoring with a $174.40 (for a dollar) exacta that wound up tripling up his opponents. On Sunday, he doubled up his foes, thanks largely to a $147.10 windfall in the 7th at Sam Houston. This week, Trepinski made $1,071 (from a final pot of $1,531) to go with the $929 he earned the previous Sunday.

The biggest Sunday money was pocketed by Keith Fenton. 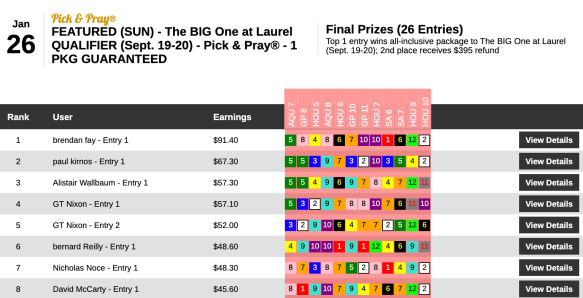 Fay became the first to qualify for a field that will number no more than 57 in the 2020 renewal of The BIG One this September at Laurel Park. Fay’s five winners and two places in our sold-out qualifier was topped by Bodecream ($21.00, $10.60) in the 7th at Sam Houston.

For your information, here is a link to our 2020 The BIG One status/qualifier update page. (It will be updated each week, all year long.): CLICK HERE

Daniel DePonte had a nice Sunday.

He had four short-priced collections early on, then added winners at odds of 9-1 and 5-1 later on to finish with five firsts and a second and capture Sunday’s NHC Low Ratio qualifier.

A lot of big scores have been turned in lately in Horse Players World Series qualifiers. That’s where Sunday’s high total could be found.

It was John Merola who picked up the $1,500 entry for his 7 winners and 1 runner up. Merola was the only player in a Sunday featured event to crack triple figures. Here’s a look at his scoresheet (which contained six of the day’s first eight winners):

In our Flo-Cal Faceoff qualifier on Sunday, the final scores were lower compared to the HPWQS play-in, but the grand prize was worth the same amount (a $1,500 entry).

There were two winners here—Jillian Scanio (4 wins, 2 places) and David Bloom (2 wins, 3 places—both of whom will be packing their cyberbags for the $100,000 Guaranteed online event on Feb. 29 – March 1.

It was a fascinating edition on Sunday of the $8 Pick 6 Jackpot tourney.

Ruben Lopez claimed top honors by virtue of having the final three winners. He should have discussed the card in the morning with Tim Downs. Downs had the first three winners and whiffed thereafter. Interestingly, Downs got halfway to the Jackpot by going three for his first three…then he took a mighty swing in the fourth race of the sequence with a horse that went off at 39-1. Downs must have really liked that longshot a lot!

Over at HorsePlayers, the Sunday main event was a $210 NHC qualifier.

Robert Carlson broke slowly in this one…but he nailed four of the final five races to draw off and win going away by $21.70. All told, he accumulated six firsts and one second.

Qualifying continues for the NHC, of course…and keep an eye out for upcoming new qualifiers to the Santa Anita February Challenge (Feb. 22) and the TSG Ultimate Betting Challenge (March 7). Sounds like it should be challenging!

Thanks for spending part of your Pegasus weekend with us. Have a “Super” week ahead.