The plan was for Jobby Blevins to play in February’s NHC and for his wife Lisa to cheer him on as his “+1” in Las Vegas. That all changed last Friday…in more ways than one.

Lisa and Jobby will now each have one NHC entry thanks to Lisa’s victory in Friday’s $75 Qualifier at HorsePlayers. Artis “Solid as a” Roque was likely as happy as Gilmore on Friday for finishing second, since that earned him a Bally’s Berth as well.

The marital bliss didn’t end there for the Blevinses.

Risking social media accusations—but perhaps preserving domestic tranquility—Lisa was gracious enough to share her Pick & Pray picks with Jobby (or was it the other way around?) in Friday’s $7,500 Guaranteed cash tourney.

The same set of six winners and a runner up brought Jobby a payday of $4,792 in an event that finished up with a total purse of $9,584.

Thanks to the Friday results, Jobby will not only have Lisa as a fellow NHC participant in Las Vegas, he can now afford to show her a good time at Bally’s. Perhaps they will take in the hit show “X Rocks”. Perhaps they will enjoy fine dining at BLT Steak…or order an extra BLT at Nosh Deli. If nothing else, they can now upgrade to large sodas at what is fast becoming the official Italian fast food purveyor of Las Vegas-based handicapping contests—Sbarro.

Here is a look at the 10 races that will send Lisa to the NHC and Jobby to the Bally’s concierge. 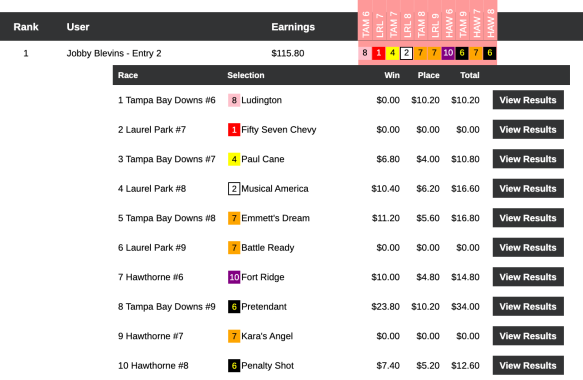 If there’s a concierge at Gulfstream, Eric Liebman can visit him/her on January 25th.

His three winners plus a place earned him a $6,500 package to the Pegasus World Cup Betting Championship.

The closest thing we have to a concierge here at HorseTourneys is the always affable Harry Furlong.

Come February 29th, Harry and the rest of us will be at George Brown’s service.

As any good concierge knows, the customer is always right. Brown was right five times…and almost right another time in the 10 tourney races that netted him a $1,500 entry to the $100,000 Guaranteed Flo-Cal Faceoff here at HorseTourneys. Brown started fast with a 10-1 victory, and finished strong with the final three winners to secure his space in cyberspace.

There were five Friday winners in our qualifier to the February 6 NHC Last Chance Tournament at Bally’s.

Congratulations to first-place finisher Gregory Lewis (whose score of $116.00 was the day’s highest) and fellow $500 entry winners Matthew Thomas, Robbie Courtney, Dino Herrera and Terry Jerge, who won a tiebreaker for fifth over…himself.

The marquee attraction on Saturday was over at HorsePlayers…the Online NHC Super Qualifier with eight spots guaranteed.

The event drew a field of 160, and leading the pack was North Carolina resident Anthony Laurino.

Laurino recorded three winners—at odds of 14-1, 3-1 and 20-1—and added four runners up to post the day’s high featured score and capture the Bally’s Berth with room to spare. Here’s how his Saturday went: 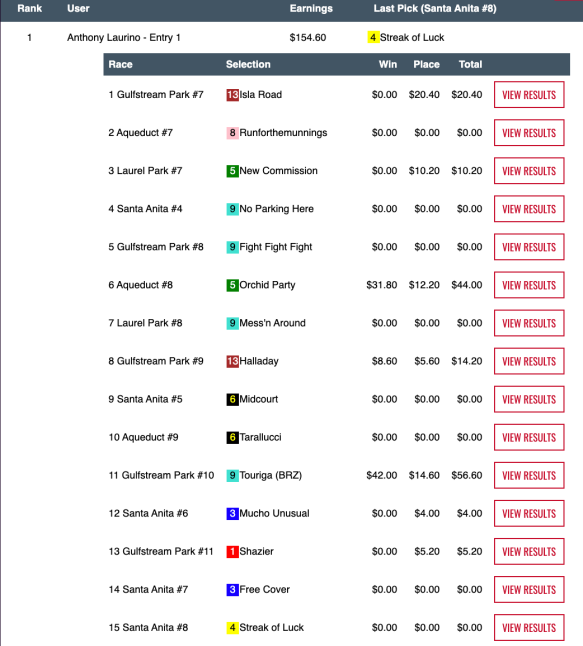 Also earning spots to the 2020 NHC in what turned out to be a 1-per-20 play-in were Jason Hammer, Peter Deys, Gwyn Houston, Derek Dickson, Matthew Rensdell, Ed Peters and Peter Osella. That’s pretty much a table-full right there.

The most lucrative cash tourney of the weekend was Saturday’s $17,500 Guaranteed event, which was won by Craig Hom.

Hom had six winners out of 12 races. We don’t know if Hom is a fan of “The Andy Griffith Show” (seen frequently on MeTV, whose programming seems more and more appealing the older I get), but his biggest collection on the day was Mayberry Deputy ($32.40, $18.80) in the 8th at Gulfstream.

Emulating the skill and fearsomeness often displayed by Deputy Barney Fife, Hom grabbed the top prize of $9,215 in a game ultimately worth a total of $20,478.

Brent Sumja also used the intrepid Mayberry Deputy as his springboard to success.

“The Deputy” was one of Sumja’s five winners…which went along with two places…en route to his earning a full-package to the March 26-28 Horse Player World Series. (The Orleans could use a seasoned law enforcement officer like Fife to help police those buffet lines!). Besides Mayberry Deputy, the key for Sumja was a quick getaway. He had the winners of four of the first six tourney races.

Aaron Bernstein (5 wins, 1 place) did not see the merits in Mayberry Deputy, but that didn’t stop him from winning the Saturday qualifier to the Tampa Bay Downs High Roller Contest.

The final weekend day of 2019 saw nine featured events go to post here at HorseTourneys. The results of one of those had a familiar ring to them.

On Saturday and Sunday, December 14 and 15, Phillip Conway made unofficial HorseTourneys history by sweeping the featured weekend cash tourneys. On Sunday, the 29th, Conway was back to his winning, cash-game ways by hitting the last two races—including Prodigal Son ($23.60, $10.00) in the final race, the 10th at Santa Anita—to round out a 6-win, 1-place day and take home the top prize of $6,471 in our $10,000 Guaranteed affair, which closed with a pot of $12,943.

Bay Stater George Chute is also closing out 2019 on a winning note.

Chute used six winners to ladder his way to the top in our Pegasus qualifier. His margin of victory was just a dollar…but that meant a $6,500 Pegasus Package for January 25th. His key horse was Into Chocolate ($12.40, $7.00) in the 9th at Santa Anita. That nice $7.00 place price on a 5-1 shot certainly helped Chute’s cause.

On New Year’s Eve, Kelly Breckner, Joel Baltazar and Mark Foss may all be raising a glass to Prodigal Son.

The 10-1 winner of the 10th at Santa Anita on Sunday was on each of their tickets, and propelled them to $1,500 entries to the March 26-28 Horse Player World Series in Las Vegas.

There were twice as many winners (six) in Sunday’s NHC Last Chance qualifier.

Steve Arrison, G.T. Nixon, Jim Lisowsky, Kerry Bassore, Jon Van Niel and Lorne Weiss were the sextet who will be redeeming $500 markers at Bally’s on NHC eve (an even more exciting day than New Year’s Eve in our book).

Van Niel and his 6 firsts and one second beat all but victor Kenny Peck, but running second was just as good as winning given that both players earned $1,500 entries to the $100,000 Guaranteed online competition here on February 29-March 1. Peck (4 wins, 3 places) had a solid start and an equally good finish, collecting in the first three races and the last three.

Mike Steindler of Sam Houston Race Park (home of the first and only NTRA Great State Challenge in 2002) has done a great job on Twitter of spreading word about Sam Houston’s big NHC qualifier on January 26. On Sunday, he let fans know about Robert Dawson’s victory in an early-afternoon $19 feeder.

It turns out that Dawson did Steindler’s Tweet one better.

Another handsome investment was Todd Love’s in our $1,000 Guaranteed Exacta tourney.

Love had three winning gimmicks, including a $47.40-for-one-dollar cash in the 9th at Santa Anita to turn his $125 entry fee into $774. David Bloom finished second…so you could say that love was blooming in this one.

Chick (aka Paul Sr.) had three wins and four places…as did runner up Ron Tackett. And both closed things out with the 10-1 Prodigal Son in the 10th at Santa Anita. That’s where Matties and Tackett will be heading next Saturday.

That’s because no one went 6-for-6 this past week. Leonard Chamey went 2-for-6, though…and that got him first place in this one.

At HorsePlayers, three firsts and one second got it done for Joseph Parella.

The reward was a nice one too: a $10,000 Breeders’ Cup Betting Challenge entry. Parella’s score of $82.40 was modest by the standards of the day’s featured-tourney winners…but therein lies the beauty of Low Ratio qualifiers.

Last but not least, we got a kick out of the “regular” NHC Pick & Pray on Sunday at HorsePlayers.

The winner was 2015 Horse Player World Series winner Jim Meeks…who will now look to be the first to pull of the NHC/HPWS double. Joining Meeks in the “Events Center” at Bally’s will be runner up Stephen Lerma.

Lerma came out smoking in this one, ripping off four winners out of four races. We pictured Lerma calling Michele Ravencraft after those first four races to specify his room preferences at Bally’s. But then Lerma went ice cold. From the next seven races his total collections were a nice round number…zero.

Before we call it a day (year?), we want to call your attention to something a little bit different that we’ll be hosting on New Year’s Eve (tomorrow).

We have a pair of 22-race, live-format tourneys that span two days, two years…heck, even two decades!

We don’t know what that baby holds for us, but we want to thank you for your support (and your reading) during 2019. Both are greatly appreciated by all of us at HorseTourneys. Happy New Year.