We’re always impressed when a player has success on more than one day of the weekend. Horse Racing is a hard game in which to be consistent. We certainly do see multi-day weekend success from time to time, but I don’t think we’ve seen it much, if at all, across our Saturday-Sunday high-end cash games. That changed this weekend courtesy of Phillip Conway.

A Louisville, Ky., resident, Conway can tell his grandchildren a contest war story or two thanks in part to War Story, whose 12-1 victory in the Harlan’s Holiday at Gulfstream in the next-to-last tourney race propelled him to victory in our richest event of the weekend, Saturday’s $17,500 Guaranteed game, which closed with a purse of $20,478. Conway’s share of that was $9,215. Here’s how the day unfolded for him: 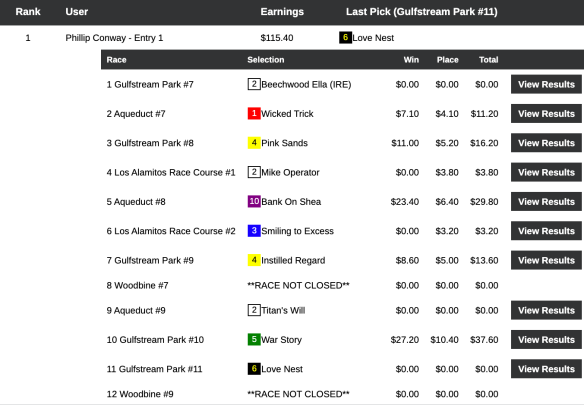 Conway reinvested $195 of his winnings in Sunday’s $10,000 Guaranteed affair, and again he managed to pull off a “Con Job”.

This victory added $6,678 to his bank account from a total pot of $14,841. For the second straight day, Conway collected in seven of the 12 featured-tourney races: 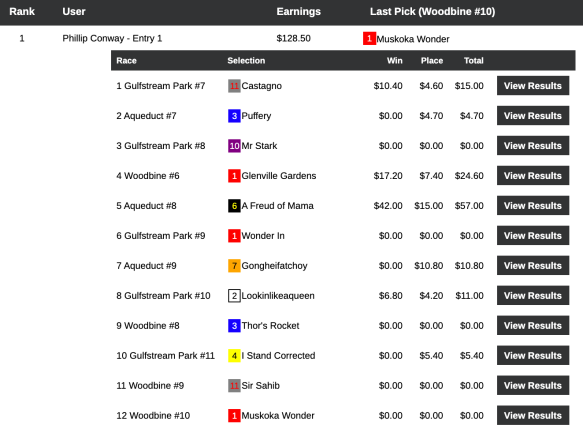 It was a $15,893 weekend (or about 26 hours, really) for him. Next weekend’s top cash games will be Pick & Prays. I hope that doesn’t mess with his mojo. I think I might take a look to see who he likes…purely for entertainment purposes, of course,

Conway was not a factor in Friday’s big cash tourney—our $7,500 Guaranteed Pick & Pray—but Derek Isenberg sure was. In fact, Isenberg was a big factor in general on Friday.

Isenberg reeled off five winners out of 10 races to take the up-top money of $5,801 in an event that finished up with a purse of $11,602. Not only did he have five winners, he had them in consecutive races.

With a streak like that, Isenberg could afford to “take off” those last four races. Fortunately for him, he didn’t take off Friday’s $75 NHC qualifier at HorsePlayers.

Using the same picks, Derek multi-tabled his way to an NHC seat for just $75. Again, he had the rest of the field in chase mode, and the one to engage in that successfully was James Lafferty, whose three firsts and one second landed him a cut-rate Bally’s Berth in the two-spots-guaranteed competition.

There were also two winners (despite just 39 entries) in our 1-per-20 Pick & Pray qualifier to the Pegasus World Cup Betting Challenge on January 25.

Rejected Again ($28.00, $9.60 in the 8th at Aqueduct) was the big horse for both Jeff “Boom Boom” Joffrion and Peter Rotondo en route to their $6,500 Pegasus Packages. I’m not sure whether the happy runner up was Peter Rotondo Sr. or Peter Rotondo Jr., but we’re confident that there were some rolled-up programs being whipped loudly in either case.

In fact, for Hawkins, Rejected Again was his only winner…but he augmented that hit with three nice place collections to finish on top. On his side of the street, Tam added just one other winner to the win-place total of $37.60 that Rejected Again provided.

Seats to the NHC Last Chance tournament at Bally’s continue to move quickly here. Nine were awarded this weekend, including four on Friday.

Congratulations to Keith Castleberry, “The Fly” Matt Tietze, Keith Castleberry (again!) and Blaise Guadagno. Each will be looking to pad his NHC portfolio (and his wallet) in the big, beautiful Bally’s ballroom on February 6.

One of those Last Chance takers struck again on Saturday.

Blaise Guadagno will not have to pay for two $300 entries at the Monmouth contest on December 28. (If he wants a third, he’s on his own!). Guadagno had War Story, along with two other firsts and a second to roll home by $25.00. Franco Pacione also picked up a pair of Monmouth contest cards for his three wins and a place. Pacione was one of the few Saturday players to taste success without having picked War Story. Finishing third and fourth were Nick “529” Fazzolari and Peter Duca. They didn’t win Monmouth entries, but they did manage to complete a “Viva Italia” superfecta.

David Nelson was also an exception to the Saturday “War Story” rule.

Nelson had 2 wins and 3 places. Four of those five collections came in the first five tourney races, and he was able to nurse that lead right to the end of our Tampa Bay Downs High Roller Tournament qualifier. Nelson receives a $1,000 entry to the January 11 event on the west coast of Florida.

One of the riders Nelson has the option of betting on at Tampa on January 11 is Jose Garcia. On Saturday, the veteran reins man’s namesake won our Horse Player World Series full-package qualifier.

The 1-per-25 qualifier offered a second grand prize despite only 48 signups. Here,
Garcia (3 wins, 3 places) and runner up Francis Drew (5 wins, 1 place) each used War Story as springboards to success.

So did Tim Gavin and Chuck LeFevre.

They both had War Story plus three other victors and two runners up to earn NHC spots in Saturday’s live-format qualifier. LeFevre got up for second thanks to War Story ($27.20 to win in the next-to-last contest race) and My Point Exactly ($7.80, $4.60) in the final tourney heat. We know LeFevre hasn’t historically been a fan of live-format tourneys that involve a high-priced winner late in the game. So it was nice to see him profit by such in this one.

Joseph Costello not only had War Story, he had each of the final three winners.

That closing kick added up to 5 wins and 2 places…and a $1,500 entry for Costello in the December 26 Santa Anita Opening Day Challenge.

Over at HorsePlayers, Francis Drew picked up his second big prize of the day.

Drew used the same picks that got him a Horse Player World Series package for finishing second to Jose Garcia…and this time he took a backseat to no one, capturing Saturday’s NHC “Maiden Special” qualifier that was restricted to those who had yet to earn a seat in the 2020 event.

There were 11 other Sunday tourney’s in addition to Phillip Conway’s cash game “repeat”. Good prices were coming in all over the place, which made for exciting competitions and high scores. The highest of the high, though, came not in our fancy cash game or our Pegasus qualifier…but in our trusty, entry-only Horse Player World Series play-in.

Marc Wlodkowski should rightfully get at least a free buffet coupon or dinner for two at Sbarro in addition to his $1,500 HPWS entry for the $176.20 score he put up, It nearly doubled that of his nearest pursuer. Here’s how Marc did it: 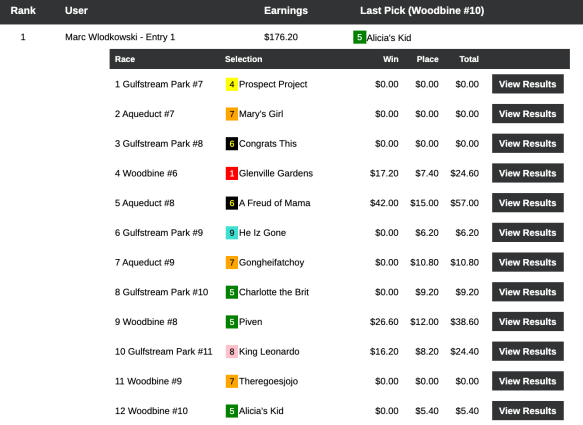 Wlodkowski may have struck the tape-measure blast, but Dave Nichols accounted for a pair of roundtrippers.

One came in the last chance qualifier to this Saturday’s NTRA/FG NHC Super Qualifier. “The Gambling Actuary” racked up the sound total of four wins and a place to merit his $2,000 package to the Big Easy. Nichols had both 23-1 winner A Freud of Mama in the 8th at Aqueduct and 13-1 Sure Would Forest, the hero of the final tourney race, the 10th at Woodbine.

Nichols then came right back with those same picks in our Flo-Cal Faceoff qualifier.

The setting may not be as glamorous as that of New Orleans, but Nichols will be front and center with a paid-up $1,500 entry to the online Faceoff on February 29-March 1. So will runner up Stephen McNatton (3 wins, 2 places), who had Sure Would Forest ($28.30, $10.80) in the tourney finale to send himself to Faceoffland.

Brian Chenvert also registered a pair of victories on Sunday—both over at HorsePlayers.

Chenvert gained what I believe is the first 2020 Breeders’ Cup Betting Challenge entry for the Chenvert family in Sunday’s Low Ratio qualifier. Another 37 entries and I believe the Chenverts will have matched the number of seats they had at the 2019 BCBC!

We’re joking, of course. Only two entries per person are permitted at the BCBC…and at the NHC. Chenvert filled in half that quota in Sunday’s regular qualifier. 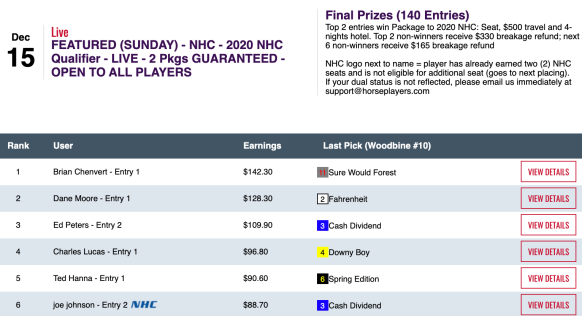 Chenvert scored event better here than he did in the BCBC qualifier…and that was despite him whiffing on the first four tourney races. Brian later tallied four wins and a place, including Sure Would Forest on closing day/night at Woodbine. (The card lasted approximately 19 hours.)

Joining Chenvert at the NHC will be runner up Dane Moore.

For Moore, it was the second NHC berth he won in the past eight days. Sure Would Forest in the nightcap got him seat #2.

While Moore has specialized in NHC qualifiers of late, Travis Foelsch had been focusing on all things Santa Anita.

Last weekend, Foelsch earned a $1,500 seat to The Great Race Place’s Opening Day Challenge on December 26. On Sunday, he picked up an identically valued entry to the January 4 NTRA/Santa Anita NHC Challenge. Foelsch had four wins and a place and prevailed by $29.70.

Even Trommer picked six Sunday winners, capped off by Sure Would Forest.

That earned Trommer a $6,500 package to the Pegasus World Cup Betting Challenge.

No one picked six Sunday winners in our $8 Pick 6 Jackpot tourney. But NHC Hall of Famer Steve Wolfson Sr. picked two (including A Freud of Mama at 23-1 at Aqueduct). 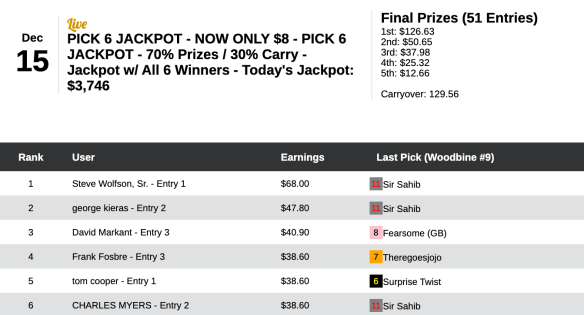 Add it all up and it meant that Wolfson took top honors in Sunday’s event…and that next week’s Jackpot will be $3,875—available to any person or persons who go 6-for-6. Do so, and you will rocket to the top of the list of possible inductees when the$8 Pick 6 Jackpot Hall of Fame comes into existence. Meanwhile A Freud of Mama may deserve a spot in some Hall of Fame for winning a race restricted to 2-year-old New York bred fillies…that had a purse of $500,000!

Our Sunday qualifier to the NHC Last Chance tournament at Bally’s was popular enough that we could award $500 entries to a veritable basketball team.

Not the Joe Johnson who will be playing at Bally’s

There wasn’t much long-range bombing going on this week in our $1,000 Guaranteed Exacta tourney.

Sometimes low scores win, sometimes high scores lose. You never know. We do know, though, that starting this week, you can play in some nice direct qualifiers on a Wednesday.

Of course, all of our Wednesday direct qualifiers will be run in Pick & Pray mode so you can attend to more pressing, if less fun, matters…like work.

Thanks for being a part of a really lively 24-featured-tourney weekend here at HorseTourneys and HorsePlayers. Your participation is not always acknowledged—but it’s always appreciated.