The holiday shopping season is suddenly in full swing (I’m already behind), and so is the contest qualifying season with the NHC and the Pegasus World Cup Betting Championship not too distant on the horizon. Due in no small part to that, we set an unofficial record this weekend with 25 featured tourneys. I have the happy duty, of course, of reporting all the winners—the first five of which came on Friday.

The 2018 Horse Player World Series Champ Bob Montgomery had just two Friday winners but they were good ones—Fritzi ($41.20) in the 6th at Gulfstream and Sweet Story ($39.20) in the 10th at the same track. “Monty” added two places to those gaudy cashes and that got him an NHC seat on the cheap in the day’s $75 qualifier at HorsePlayers. (Add Montgomery to the list of Canadians who enjoy South Florida during the winter!) Ernest “Say” Hey Jr. grabbed the other Bally’s Berth thanks to three winners and one runner up.

In a mild upset, the high score on Friday came in the entry-only Horse Player World Series entry-only qualifier.

It was recorded by Joe “JK” Koury, also known as “The People’s CFO”. Koury put three wins and four places on the credits side of his ledger to win a $1,500 entry along with runner up Scott Eyraud. Here’s a look at Koury’s good Friday:

Andrew Walker had a profitable Friday on his end as well.

Walker hit Motion/Prado longshot Fritzi in the first contest race and didn’t look back from there, capturing our $7,500 Guaranteed Pick & Pray. Walker’s winner’s share was $5,717 from a total purse that finished up at $11,434. 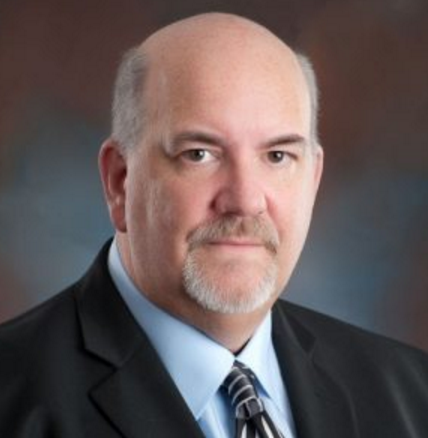 His last-race hit with Sweet Story ($39.60, $11.20) might steal the headlines but, as is the case during eye exams, the real story is sometimes told in the fine print.

Trezza picked three other winners to go with his last race longshot. They paid just $5.20, $5.00 and $3.40. Those innocuous looking tallies, along with three places more than accounted for his $2.80 margin of victory.

Friday’s other feature was our first qualifier to the NHC Last Chance tournament at Bally’s on February 6 (NHC eve).

Business was brisk for this one and three $500 entries were awarded. Congratulations to Ed (as in bread) Peters, Stephanie Davis and Tony Calabrese.

It was a busy Saturday with eight featured events—up from the usual four or five. One of those eight was the richest of the weekend, our $15,000 Guaranteed Pick & Pray. It nearly wound up delivering a true contest oddity. 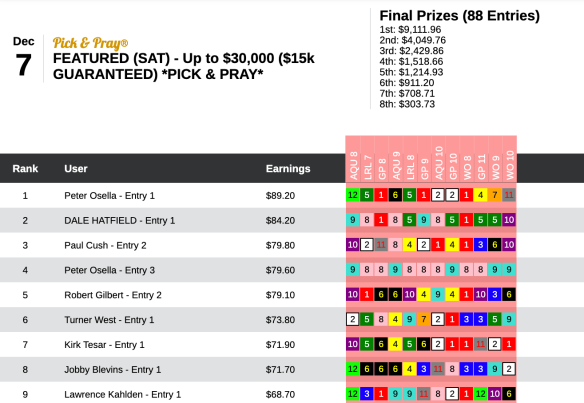 Peter Osella won thanks to three victories (including 13-1 shot Show Me Your Spots in the 8th at Woodbine) and a placing. That earned him top money of $9,111 from a total final pot of $20,248. You’ll notice that Osella also came in fourth with his other entry. That added another $1,518 to his coffers. What was kind of amazing about it all was that Osella was in first and second places going into the final tourney race…and his two entries didn’t have a single common selection. Usually when your winners are pretty evenly distributed across two entries, you wind up with the middle of a donut. Not Osella on this day!

Tampa Bay Downs doesn’t want just anyone hanging around its racetrack…so it doesn’t publicize the event much on its website, as Justin Dew pointed out in a recent blog. It apparently chooses its patrons quite well, though.

Robbie Courtney, fresh off an emotional NHC seat win a couple of weeks ago that you may have read about here, led the way here to pick up a $1,000 entry to the land of the beautifully maintained turf course.

Courtney (2 wins, 4 places) was one of the last horses away, but he cashed in each of the last four races to get up…in the shadow of the wire…over runner up Henry Conte, who also won an Oldsmar, Florida, entry. Should Courtney and Conte arrive at Tampa Bay Downs a day early, we expect that they will find tomorrow’s edition of Daily Racing Form on sale there.

Stephen “The Undertaker” Thompson buried his competition In Saturday’s NHC Pick & Pray when his selection, Yes I See, won the 8th at Gulfstream at odds of 66-1.

Fortunately for Dane Moore, he could also see the merits in Yes I See and, as a result, he’ll be joining Thompson at Bally’s this February.

Travis Foelsch was the winner of our first qualifier to the Santa Anita Opening Day Challenge, to be held on December 26, the traditional opening day at The Great Race Place.

Monmouth Park frequenters George “Ki” Bosch and William Holobowski will be there again on December 28.

The always gracious Wayne Tam could take a couple of bows after his performance on Saturday.

Tam had just two winners and a place, but one of those winners was Yes I See…and we now see the Horse Player World Series in Wayne’s future…along with a four-night hotel stay at The Orleans and $500 for travel.

Over at HorsePlayers, there were two more NHC qualifiers (making for a whopping three on the day).

Al “Forward” Roehl had three winners, including Show Me Your Spots, to capture the day’s $500 Low Ratio event.

In the NHC “Maiden Special”, restricted to those who had not yet won a 2020 NHC seat, Thomas F. McNamara joined the band at Bally’s by hitting Claiming Crown bomb Yes I See plus one other winner and one runner up. (And Stephen Thompson almost picked up his second NHC seat in one day!)

A dozen featured tourneys went postward on Sunday. The two at HorsePlayers were won by familiar names.

Ernest “Say” Hey Jr. had a weekend that must have looked like an optical illusion to a lot of people. (If you get that reference, then you’re a true baseball fan.). Anyway…he he crossed the NHC off his to-do list on Friday in the $75 qualifier. On Sunday, he sprung for a $500 Breeders’ Cup Betting Challenge Low Ratio entry and now he can cross off the BCBC as well. Ernest was saying “Hey!” the loudest after the first tourney race when his biggest price came in—Twisted Tom ($30.40, $12.40) in the 8th at Aqueduct.

Hey wasn’t the only multiple-day winner this weekend.

Saturday cash-game star Peter Osella wasn’t just having a good day, he was having a good weekend. Here he caught an $8.00 place horse in the final race to get up into second behind Jobby Blevins in Sunday’s regular NHC Pick & Pray. It should also be noted that on Thanksgiving, Osella also picked up a $6,500 Pegasus entry…so he’s seeing the ball very well right now.

As for Blevins…as expected, his publicity agent helped spread news of his victory in a timely fashion. 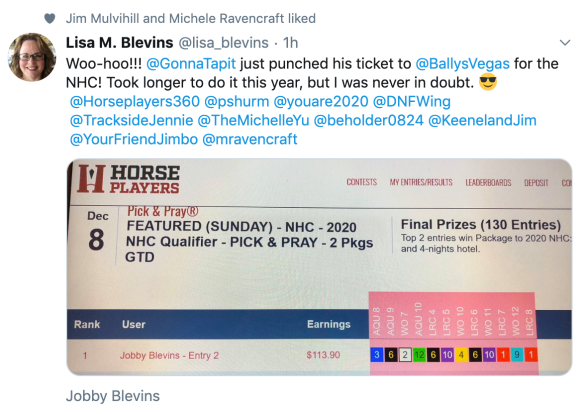 The family that plays together…

Back here at headquarters there were 10 featured events, including our first to the January 4 NTRA/Santa Anita NHC Super Qualifier.

There, current NHC Tour leader David Snyder will look to improve on his 2019 Tour year tally thanks to his score of $119.90, which turned out to be the day’s best. 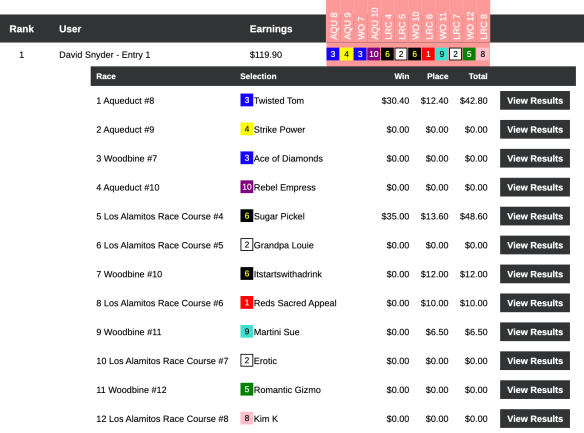 Turner West, that is. He had three firsts and two seconds to garner the $1,500 entry and $500 travel stipend.

The winners of Sunday’s NHC Last Chance qualifier can nearly fill up a table at Bally’s. There were six of them.

Wiener can also help fill out a table—or at least a cybertable—at the Flo-Cal Faceoff.

And so can Frederick Cipriano, who bested Wiener by $1.10 to take top honors. Both advance to the $100,000 Guaranteed All-Gulfstream/Santa Anita online competition here at HorseTourneys on February 29 and March 1.

About a month before the Flo-Cal Faceoff comes the Pegasus World Cup Betting Championship.

Back in October, Cara Yarusso won the Orleans Fall Classic. She is the first woman to win that event. In March, she will bid for a unique “natural double” at The Orleans.

Yarusso had four wins and two places to earn a $1,500 Horse Player World Series entry on Sunday. She will be joined at the home of the Crawfish Bar by runner up Dan “Call of the” Wilde, who checked in second with two wins and two runners up.

As we do every other Sunday, we offered a pair of $10,000 Guaranteed Pick & Prays. One was our bi-weekly Big Bucks tourney.

Why is Michael Caposio smiling? 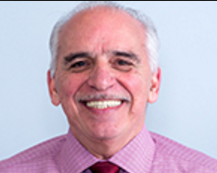 It’s because the Temecula, Calif., auto dealership executive had 16-1 Los Alamitos winner Sugar Pickel. And because that propelled him to a victory worth $9,261 in a game that closed with a pot of $13,230. 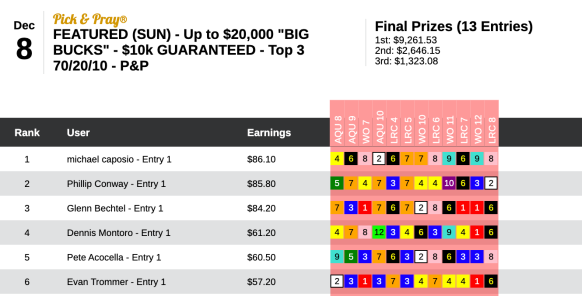 The day’s other $10,000 Guaranteed competition was our weekly one…the game that carries an entry fee of $195. 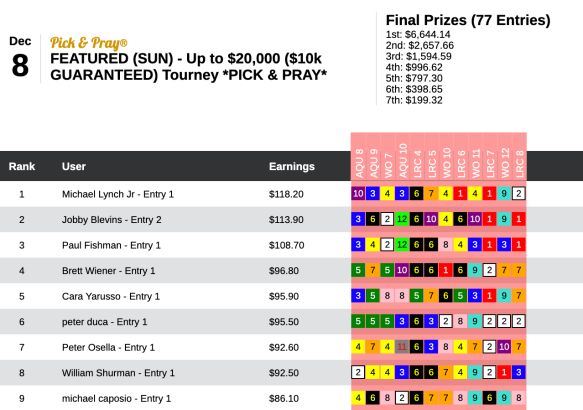 This one was captured by Michael Lynch Jr. who recorded five firsts and one second to take home a first prize of $6,644 in a game worth a total of $13,288. Lynch made all six of his collections consecutively…in races 4 through 9 of the 12-race affair.

Another Sunday cash-game staple is our $1,000 Guaranteed Exacta tourney.

Last and least (in terms of entry fee) was Sunday’s $8 Pick 6 Jackpot tourney.

The winner was Ken Kieras who had four of the six possible victors. Since no one went six-for-six, next week’s Jackpot will be $3,746.

Thanks for being a part of our “record” weekend at HorseTourneys. Have a great week ahead and, if you’re in the mood, we’ll have plenty more featured action waiting for you next weekend.