It may not have been a Breeders’ Cup loaded with star power, but races were competitive affairs. Betting records were set on the event, and action was similarly heavy here at HorseTourneys, where several high-end cash games and qualifiers left many of our players with a weekend to remember—especially Mike Martin.

It wasn’t easy for Martin, though. In fact, the result came down to the last race. Martin trailed Joseph Calvo by a buck heading in to the Breeders’ Cup Classic. As the horses broke from the gate, their selections were revealed. Martin was on McKinzie, Calvo on Code of Honor. Neither horse won, of course, but McKinzie’s place payoff of $4.80 for the runner up finish behind Vino Rosso gave Martin the top prize of $32,943 in Saturday’s full-card $75,000 Guaranteed tourney that finished up with a final purse of a robust $82,358. Calvo had to settle for second, but that was certainly a nice return on the $495 entry fee too—$13,177.

In total, Martin recorded five Saturday winners and two places out of the 12 Santa Anita races. Here’s how his profitable day went:

It stands to reason that Dennis Montoro had a profitable Breeders’ Cup. He came in 7th behind Brad Anderson in the Breeders’ Cup Betting Challenge. There Montoro turned his starting BCBC bankroll of $7,500 into $64,911.

Perhaps Montoro was really confident in his BC picks. Perhaps he really likes the $2 win/place format. Perhaps he just likes a lot of action. In any event, he plunked down $495 to enter our Friday, two-day $25,000 Guaranteed tourney, which consisted of just the 14 Breeders’ Cup races (five on Friday, nine on Saturday). The final purse ended up at a big $47,322.

Montoro was a solid fourth out of 108 entries at the conclusion of those first five races. He still had plenty of work to do, though, as he trailed Day 1 leader Anthony DeCaspers by a not insignificant $40.00.

Hitting Belvoir Bay and Spun to Run early and Bricks and Mortar and Vino Rosso late, Montoro was more than up to the task.

Notice that Montoro’s selection of Vino Rosso not only added to his total, but blocked runner up Thomas Camann ($8,516) who otherwise would have overtaken him.

Kudos and condolences both to Anthony DeCaspers who only managed $8.80 on Day 2 but still collected a nice $1,655 for his efforts.

As for Montoro, here’s a look at his scoresheet over each of the two days: 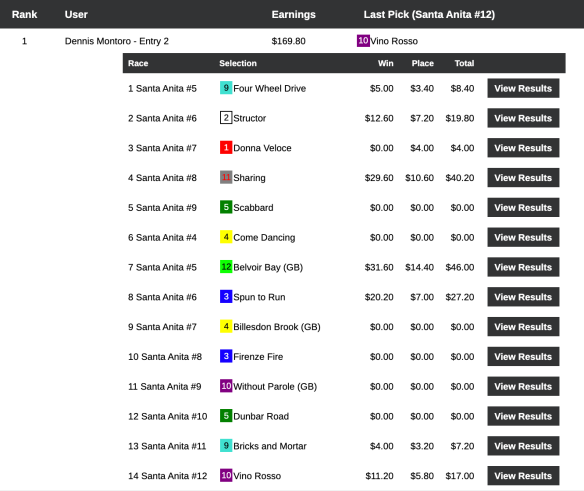 There was a significant cash tourney as well focusing strictly on the Breeders’ Cup Day Friday card, and it was captured by Mark Stillmock. 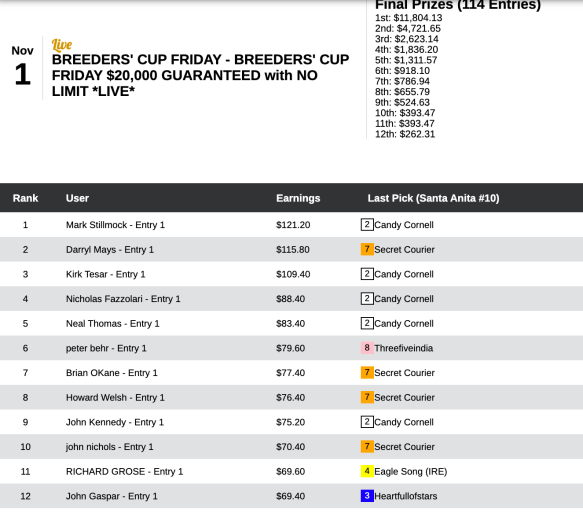 Stillmock had just two winners out of the 10 races, but they were good ones—the 14-1 Tap Back on the undercard and 45-1 Storm the Court in the Breeders’ Cup Juvenile. Those two longshots plus a pair of placings got Stillbock top money of $11,804 in a $20,000 Guaranteed event that closed with a pot of $26,231. Here’s how Stillmock’s Friday progressed:

“JVN” got up late with Threefiveindia, the last of his four winners that went along with two places, and he received the $1,500 entry in a closely-contested Horse Player World Series qualifier.

Dennis Klein and Cheryl Tayala were the two winners of NHC seats in Friday’s $75 qualifier at HorsePlayers.

Klein (2 wins, 4 places) and Tayala (2 wins, 1 place) each had the Jeff Bonde-trained speed merchant Tap Back. Klein’s other winner was Sharing, who took the Breeders’ Cup Juvenile Fillies Turf at 13-1. Tayala got her “Bally’s Berth” in no small part due to the unexpected wire-to-wire exploits of Storm the Court in the Juvenile.

There was one other featured event on Friday, our $500 Guaranteed Exacta tourney, and it was notable on a couple of different fronts. 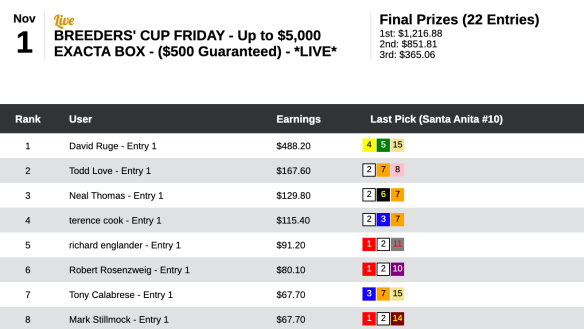 For the second straight time, the featured exacta tourney was won by a player who got all his earnings from a single race. Last week, it was Stephen Lerma who did all his damage in the first contest race. This time it was David “Bleu Blanc Et” Ruge who needed just a single race. Unlike the impatient Lerma, however, Ruge waited until the final heat, connecting on the Storm the Court-Anneau d’Or exacta that brought in nearly three times the total of the second-place finisher. The tourney closed with a pot of $2,433…of which Ruge received $1,216.

That’s right…Ruge won this one too. This time he merely doubled up (and then some) his nearest pursuer. Sacre bleu! On this day, he had three victorious three-horse exacta boxes, the most lucrative of which was the $173.30 return (for a buck) generated by the Twilight Derby, which was topped by 18-1 Mo Forza (for my money, the toughest winner to come up with all weekend).

Saturday’s $210 NHC qualifier turned out to be a slugfest Jason Alonzo (6 wins, 1 place) and Tyler Chaney.

One of the most lopsided tourney victories of the weekend (excepting perhaps David Ruge’s Friday Exacta devastation) was Steven Doodnauth’s in Saturday’s $5,000 Guaranteed Pick & Pray, which finished with a total purse of $7,075.

This one was offered at a buy-in of $195 so as to provide an alternate price point relative to our $495 games. Doodnauth responded with a score that would have beaten all but Mike Martin’s in our $82,000 tourney. Doodnauth won by well more than a cap horse and earned $3,537. His three biggest winners (out of five on the day) all came in grass races. Here’s a look at his full Saturday scoresheet: 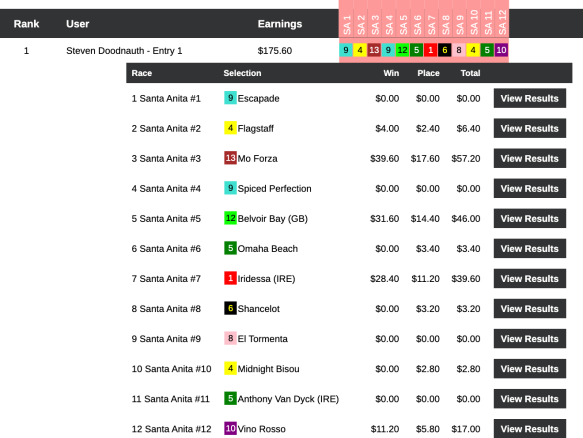 Two players with strong “Las Vegas resumes” are Chris Littlemore and Alan Denkenson…Littlemore for his 2017 NHC victory and Denkenson for his overall body of “gambling work” that resulted in a movie (“Lay the Favorite,” starring Bruce Willis) being based on him.

Littlemore and Denkenson can each look to pad those resumes next March at the Horse Player World Series thanks to their starring roles in Saturday’s full-package qualifier. Both had Mo Forza in the Twilight Derby. Just that alone may qualify one to be the lead in…perhaps not a major motion picture…but, I don’t know, maybe a handicapping video?

So far in this recap, I’ve spent too much time on Mo Forza and not enough on Andrew Walker.

Sunday’s high score (by just 20 cents) was turned in by Scott Eyraud.

His four wins plus a runner up got him a $1,500 entry to do battle with Littlemore, Denkenson and the others in the March 26-28 Horse Player World Series. Here’s how Eyraud did it:

The scores were lower—but the competition arguably more interesting–in Sunday’s qualifier to the Lone Star Park NHC qualifier on December 7.

Going into the final race, the 9th at Santa Anita, HoJo was leading Mark Ansley by fewer cents (20) than Howard Johnson’s had ice cream flavors (28). The 8-5 favorite in that nightcap race (for the tourney, for the day at Santa Anita and for the meet at Santa Anita) was Bully for Eric. A cash for both players was crucial, but Ansley needed to avoid being blocked. Perhaps that’s why Ansley went with 2-1 second choice Don’tteastthetiger. Unfortunately for Ansley, Johnson also took Don’tteasethetiger, possibly hoping that THIS would be the horse that would result in a block for the same reasons stated above. Don’tteasethetiger wound up winning, but the block meant that the two players simply maintained their previous positions in the standings. So maybe it was intriguing end-game strategy that determined the outcome…or maybe both players just really liked Don’tteasethetiger way more than Bully for Eric. It’s just one of the many decisions contest players are often confronted with at the end of a tournament.

On Sunday we offered our first qualifier for the November 16 Aqueduct Challenge.

Howard Blumberg (6 wins, 1 place) and Eric Brothers (4 wins and a place) were the two winners here of $500 entries. Brothers got up for second thanks to Don’tteastthetiger at the end. Be aware that your last chance (right on the heels of your first chance) to win a spot at The Big A comes next weekend. 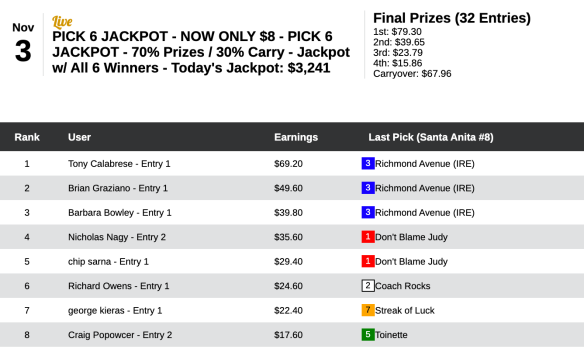 Calabrese had a pair of winners out of the six that made up the contest. Since no one got all six right, next week’s Jackpot will be $3,308.

Sunday’s winner of our $1,000 Guaranteed Exacta tourney (which went at zero takeout to players and at a loss to HorseTourneys) was not David Ruge…

Kloehn had six winners on the day, including the first three and the final two. The six ranged in price from a low of $3.30 to a high of $10.20. The end result was $800 worth of entry fees for Kloehn—good to cover him for both of the single-day tournaments on the outskirts of the Windy City.

Last but not least was the NHC “Maiden Special” tourney over at HorsePlayers on Sunday. 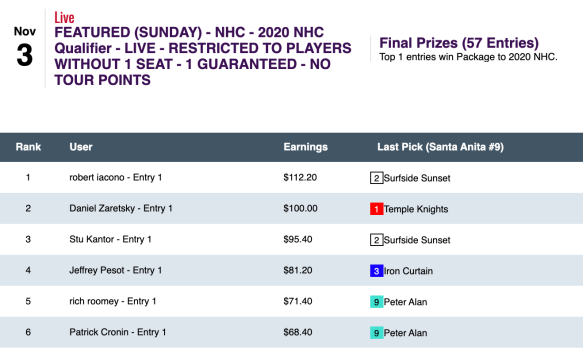 Robert Iacono turned in a very nice score of $112.20 (just 20 cents behind Scott Eyraud’s in the HPWS qualifier) to capture the NHC seat in an event that was restricted to those who had yet to earn a 2020 spot at the big dance.

We hope you enjoyed the races—and the tourneys—during Breeders’ Cup weekend wherever you spent it. We appreciate the kind assistance of Breeders’ Cup and Santa Anita Park in allowing us to offer the BC tourneys to you—and, most of all, we appreciate you for being a part of it all.