As contest players, many of us have been conditioned, out of necessity, to zero in on a single horse that we like best in a race and make that our selection. That type of thinking doesn’t seem to hold much sway with respect to people who provide their analysis each year of the Kentucky Derby. The general mindset seems to be more like, “Use ‘em all!”

I fully understand that a 20-horse field creates opportunity for bloated exotic and even straight-wager payoffs. I also get that there is a great deal of pride involved in people being able to say after the fact, “I had the Derby winner.” Or if not that, then “I liked the Derby winner.”

At the same time, our annual Derby bet/bets represent one race’s worth of plays in a year’s worth of plays. Why do people feel the need to bet 10 or 20 times the amount on the Derby that they play in a normal race? (It certainly can’t be because they think the Derby is a simple race to handicap.)

A week or so ago, I read with bemusement one of those horse-by-horse Derby analyses that provided a bit of commentary followed by a label of each horse as something along the lines of “win candidate,” “contender” or “pretender.” Thirteen of the 20 horses were labeled “contender” or better. Most of the contenders received little add-on comments like “a must use in the exotics”…”could help fill out the bottom of your tris and supers”…”will be on many of my tickets,”…et al. It’s kind of like those youth sports where everyone gets a trophy, only here the trophies are handed out more out of self-interest.

Call me cynical, but I always read such half-hearted endorsements as, “I don’t like this horse at all, but if he runs the best race of his life and gets the best trip of his life (in a 20-horse field), there is some chance he could do okay…so I better toss him in. It will increase my chances of sounding smart later! If I’m wrong, no one will remember!”

What I genuinely want to know, though, is this: do the majority of players really dial-up the size of their wagers dramatically just, you know, because it’s the Derby? Also…do those of us who typically concentrate on win bets or three-horse exacta boxes suddenly turn into five-by-nine-by-thirteen trifecta-part-wheeling madmen? And furthermore…when a Derby handicapper writes that some ridiculous-looking horse “Will Be On My Tickets,” how many tickets are we talking? Three? Thirty-three?

Perhaps more to the point, would I ever want to become one of those people who plays that many tickets on a race? 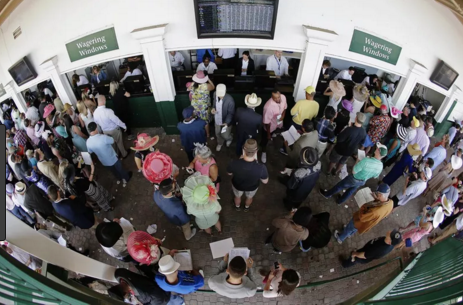 Speaking of uncool, I am now about to do something that will undoubtedly anger many of you…and that runs counter to much of the conventional wisdom out there. I am going to praise Churchill Downs, Inc.

If I try to come up with the top three positive things that have happened in the horse racing industry over the past 15 years or so, at or near the top of my list would be (in no particular order) a) the ease with which one can watch and wager on a race, b) the popularity of contests, which have provided a fun and different way to play the races and c) the ever-increasing popularity of the Kentucky Derby.

The Derby really is America’s Day at the Races. It’s a day when the excitement, history, beauty and gambling sizzle of the sport all come together. Heck, it’s also one of the few days when all the attention (and marketing dollars) paid to glamming up the game actually seems to pay a dividend.

Despite declining handle numbers since 2003, people still love the Derby—as much or more than ever before—and it didn’t happen by accident. I think Churchill deserves a lot of credit for continuing to nurture and grow the event in a way that has kept it the high holy day that it is for both devoted players and casual fans, alike. When did the Derby peak? You could argue that it never has peaked. How many things in horse racing can you say that about?

Many of you probably assume that we have a contentious relationship with Churchill because they won’t let us use their tracks (or the tracks that are part of their simulcasting compact) in our tournaments. We don’t.

That is their decision, and we respect that. We don’t agree with their thinking, but we realize it’s their right to make that call. We lose something by not being able to use their tracks…and we like to think they lose something by us not including them.

Having said that, this sport needs the Derby to be great—maybe now more than ever. With the attention and excitement that the Derby generates comes increased scrutiny. The sport needs to work harder to keep its house in order, of course, but it also needs to have a house in the first place, and the Derby is, indisputably, the front door to that house for mainstream America.

And so we wish Churchill well this weekend and are rooting for them to put on yet another great show—for everyone’s sake.

4 thoughts on ““This Horse Has No Shot…but He’ll be on My Tickets!””