With the Breeders’ Cup Betting Challenge now in the books for 2018, the next major event on the tournament calendar is the Pegasus World Cup Betting Championship on Friday and Saturday, January 25-26 at Gulfstream Park.

We’ll be offering every-other-weekend, $480 qualifiers for the Pegasus at HorseTourneys and, assuming they fill, winners (one per each 30 entries) will receive their $12,000 buy-in to the event plus $500 for travel.

The Pegasus World Cup Betting Championship offers a guaranteed prize pool of at least $435,000, and that pool—which includes five seats to the NHC—is fully funded by The Stronach Group, Xpressbet and Gulfstream Park via the players’ betting churn. 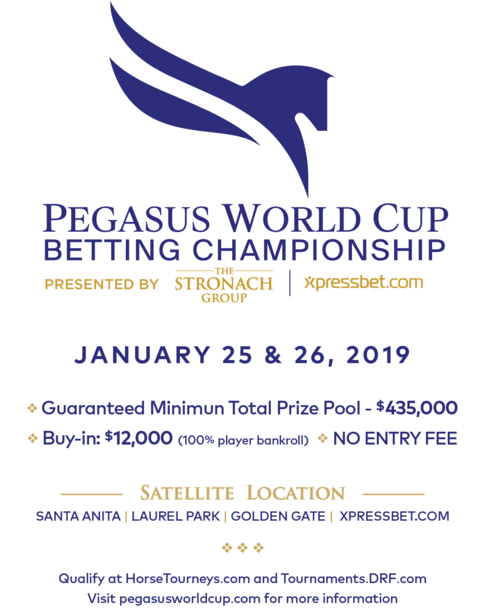 Already double qualified to the 2019 NHC? No problem. Double qualifiers can take a seat to the 2020 NHC instead. Win both the Pegasus World Cup Betting Championship this January and either the 2019 NHC or BCBC and you’ll earn a $1 million bonus (payable via either annuity or $600,000 lump sum).

The Pegasus World Cup Betting Championship is clearly one of the biggest contests of the year. So is the Breeders’ Cup Betting Challenge, which was held last Friday and Saturday. We salute winner Charles Grubbs, who finished with a total of $94,020–$87,020 of which was earned via a combination of win and trifecta plays in the final contest race, the Breeders’ Cup Classic.

If you’re like me, you had a difficult Breeders’ Cup, especially when trying to “beat the chalk”. Still, I thought it was a great two days of racing—one of the more memorable Breeders’ Cups in the event’s history…especially compared to the other two-day Breeders’ Cups.

And no matter how unlucky I may have felt during the two days, I know I wasn’t nearly as unlucky as trainer Jason Servis. With any luck at all, he would have had his first two Breeders’ Cup winners. Instead, he got none.

His Breeders’ Cup Turf Sprint runner, World of Trouble, may be one of the only horses in history to run a Beyer Speed Figure of 118 and lose. That setback came courtesy of Turf Sprint repeater Stormy Liberal (by Michael Avenatti out of Stormy Daniels?).

The name “World of Trouble” turned out to be doubly prophetic for Servis because that’s exactly what Uncle Benny had a day earlier in losing the Breeders’ Cup Juvenile Turf to Line of Duty. The TV commentators seemed to focus exclusively on the late-race bump between the two, but even more detrimental to Uncle Benny’s chances was when he got either shut off or beaten to a spot (depending on your point of view) by Line of Duty just as the field was preparing to turn for home.

I’m not expecting horseplayers to shed any tears for Servis, who seems to have become a lightning rod for controversy given his horses’ occasional propensity to turn in gigantic efforts. But along with the remarkable performances by horses like Newspaper of Record and Enable, I’ll always remember the 2018 Breeders’ Cup for those two tough losses as well.

Another thing I might remember this year’s Breeders’ Cup for was (drum roll, please)… 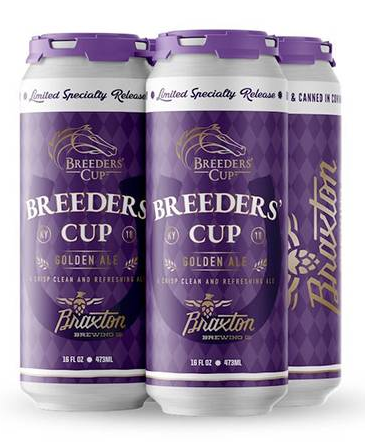 No one who knows me would ever categorize my sense of humor as “highbrow” and for some reason this new beer licensed by Breeders’ Cup for the 2018 had me giggling to myself about 12 different times during the weekend.

I love any excuse for alliteration, though I guess “Breeder’s Cup Beer” wouldn’t have sounded fancy enough…so “Breeders’ Cup Golden Ale” it was, I guess. It was on sale at Churchill Downs for $7.00 a can prior to Breeders’ Cup (according to one of the track’s concession stand workers) and for $12.00 on Breeders’ Cup Friday and Saturday. Value drinkers would have headed instead to a Louisville-area Kroger’s where a four-pack like the one pictured above was advertised to retail for $9.99 (for all four cans!).

Breeders’ Cup Golden Ale was well-promoted with full-page ads in both Friday’s and Saturday’s track program. While in Louisville, I was disappointed not to see any TV ads along the lines of the following:

(Loud sound effect of a beer can opening, then a quick cut to a tight shot of Baffert smiling broadly)

The rest of the spot would show Baffert chugging down a BCGA, pouring one over the head of an owner, maybe even dumping some into one of his horse’s feed tubs.

Anyway, all seriousness aside, I was pleased to see Breeders’ Cup paying some marketing attention to the Joe Six Pack types like me. All the fancy, colorful mixed drinks the major tracks try to tie to their big race days never really resonated with me. They just all look so…feminine.

No such worries with Breeders’ Cup Golden Ale! Finally a racing-promoted beverage that can be enjoyed by Turf Clubbers and railbirds, alike.

Having said that, I couldn’t bring myself to actually drink one of those BCGAs. I certainly wasn’t going to pay $12 for one—but even at Kroger prices, there was just something about that purple can that made me think subconsciously that it was going to taste like grape soda.

Here’s hoping that the good people at Breeders’ Cup consider a packaging re-do for their Golden Ale. That (and perhaps one or two fewer winning favorites next year) sure would leave a good taste in MY mouth.