Last weekend was a dicey one for which to pick contest races—particularly on Sunday. We strive to post our races at least 48 hours in advance in order to not just give players ample time to handicap, but to allow them to review the race offerings and decide if they even want to play at all.

The races carded on Sunday by tracks that allow us to use their races were generally weak with the notable exception of Kentucky Downs, which, as per usual, had a terrific card. However, their Sunday forecast was dreadful. The track had scrapped cards in previous years, and Sunday seemed like a candidate for the same…at least as of Friday morning.

What to do? During the winter, we would basically avoid like the plague any track that seemed in danger of closing due to a snowstorm. After all, HorseTourneys rules dictate that at least 70% of a tourney’s races must be run in order for a tourney not to be canceled. And no one benefits from a cancellation. We lose a day of operations, and you have no action.

In the wintertime, though, pretty much any track that might be snowed out is not one that people are dying to play at that time of year. So ignoring a potentially snowed-out track is a little like telling your seven-year-old child at the dinner table, “Sorry, I didn’t make any cauliflower tonight.” Even if he likes cauliflower a little bit, he’s unlikely to be all that disappointed.

Not so with skipping over Kentucky Downs. If the weather cleared up over the next 48 hours, we’d look foolish for not including them. So we decided to hedge our bets and just include three of their best races in our 12-race schedule so that if they did cancel, 75% of the tourney races would still remain and the show could go on.

That’s what happened last weekend, of course, but Kentucky Downs was only part—the easier-to-manage part—of the equation on Sunday.

Remember that the race offerings at tracks like Belmont, Monmouth, Gulfstream, Laurel and Los Alamitos were generally weak and cheap with an unusually high number of especially cheap races (i.e. $10,000 claimers or lower) that we typically like to skip. At the same time, the weather forecast for the East still looked promising enough for grass racing as of Friday morning. So in building the nine “other” races around the three from Kentucky Downs, we opted to include turf races from the East.

With the benefit of 20/20 hindsight, this proved to be a mistake, as the Sunday forecast deteriorated significantly on Friday afternoon and even more so on Saturday. As it turned out, all the grass races we chose from Belmont, Laurel and Monmouth got moved off the turf and most of those fields wound up being short ones. 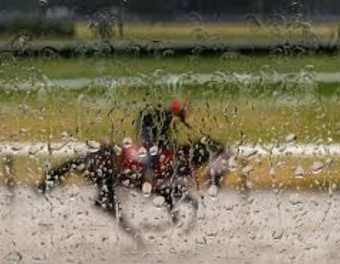 At this point, we were locked in, though. The good news was that we weren’t in danger of having to cancel our Sunday featured tourneys altogether. The bad news was that many of the nine races that were left might not strike players as stellar betting events. With our typically aggressive offerings of guaranteed cash tournaments (and also a guaranteed qualifier for The BIG One) on Sunday, this meant that, as of Sunday morning, we looked to be in serious jeopardy of taking a bath in terms of having to make good on guarantees in tourneys that might not fill.

Ultimately, the show went on. Business was off as we expected it to be, and we took a monetary hit on a couple of featured tourneys while others cleared the “guarantee bar” (barely).

Swallowing losses is not good for us, of course, but in the long run, we believe it to be the lesser evil as compared to canceling tournaments or, even worse, substituting in different races at the eleventh hour and forcing players—many of whom had already entered expecting one set of races—to suddenly scramble to handicap races they hadn’t planned on the night before, or a couple of days before when they made their purchase decision.

Handicapping the weather two days ahead of time is always an inexact science—but do know that we will always sweat details like this to try and ensure that a tourney you’ve been looking forward to for days or weeks will take place as scheduled…and that it will take place without last-minute curveballs other than races sometimes being moved off the turf…which is, of course, one of the basic challenges we inevitably face as horseplayers on any given day.

Though not at HorseTourneys, we play tournaments too. And we will always strive to treat you the way we would like to be treated ourselves.