It’s sometimes easy to think that the supply of future contest players has been fully tapped. Happily, this is not the case. Justin Dew is just one of many longtime horseplayers I know who just recently—about a year and a half ago—started getting involved in tournament play.

For a relative newcomer to the contest arena, Dew has done very well. He cashed at the 2017 Wynn Handicapping Challenge where he finished 7th, and turned his starting stake of $7,500 into a sizable profit at last year’s Breeders’ Cup Betting Challenge, where he checked in 27th.

An NHC berth, however, had eluded Dew, but that looked like it would change early last Sunday evening.

Heading in to the last race, the Sunland Derby, in Sunday’s 2-seat NHC qualifier, Dew was in fourth place, just $17.60 out of the lead and (even more to the point) $10.60 out of the just-as-good-for-him second-place position.

Dew liked Runaway Ghost in the Sunland Derby, and as the horses began the loading process, Dew checked the odds, which were a more-than-sufficient 7-1, then entered his selection in the live-format qualifier. A short time later, the gates opened and the race was on.

“I checked the leaderboard as the horses broke from the gate,” Dew recalled. “Of the three people ahead of me, two, including the leader, had Peace and one had Runaway Ghost like me. I knew I couldn’t finish first, but since Runaway Ghost was 7-1, I figured as long as [he won and] Peace didn’t run second and pay a big place price, I was a lock for the top two.”

Runaway Ghost took full command of the race as the field turned for home, and he won going away. There was one problem. The odds on Runaway Ghost, not shown on the Sunland Park feed after the loading process began, had dropped from 7-1 to 7-2. Instead of paying sixteen-something to win, he paid $9.80…and $6.00 to place. The net result—Dew finished third, $1.80 out of second.

Brisnet’s Ed DeRosa has good access to some of the inner details of the tote, and he was able to post on Twitter a minute-by-minute breakdown of the odds on Runaway Ghost prior to the start of the Sunland Derby. 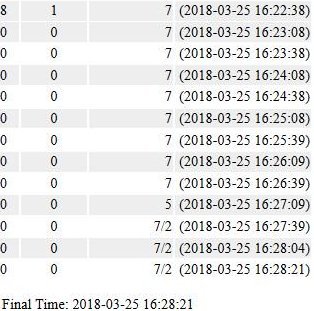 It looks like the heavy action came in on him about 70-80 seconds prior to the actual off time. Those in attendance at Sunland may have seen the updated 7-2 odds prior to post time, but not those watching at home on TV or on an account wagering feed.

No matter how long you’ve played, the game is uncanny in its ability to administer pain of a sort that you’ve never quite felt before.

“As they turned for home, I knew he was a winner, so I checked the final odds [on an ADW site] with about an eighth of a mile to go, and I felt nauseous. For about two seconds, I knew what it was like to qualify for the NHC. Only I hadn’t.”

Dew’s story almost strikes me as a cross between Lucy pulling the football away from Charlie Brown…and those people who have briefly been to “the other side” before miraculously being brought back to life. Except that this was sort of the converse of that—more a case of being restored to death.

For his part, Dew is staying optimistic. As bad as things were on Sunday, he says it only hurt “about 1/5 as much” as when Commissioner got run down late by Tonalist in the 2014 Belmont Stakes, a result that cost him about $35,000. Several people also reached out to him with kind thoughts on Sunday.

“I heard from a number of friends who said they vomited for me, so I’m ready to move on. I feel like I’m on the verge of being a major competitor,” Dew said. “But I’m clearly not there yet.”