Riding the strength of a great third day–and fighting off the weakness of a cold that had sapped his energy–Bob Montgomery won the 2018 Horseplayer World Series (HPWS) crown. The victory over his 427 opponents was worth $231,120, plus a Day 3 bonus of $3,852 for his second-best-of-all Saturday score.

A 54-year-old self-employed accountant from Ottawa, Ontario–who qualified for the HPWS at HorseTourneys–Montgomery registered solid but modest scores of about 600 points on each of the first two-days of the three-day competition. His 15 selections on Saturday, however, added a robust 1,674.20 contest points (based on mythical $20 win and place wagers) to give him a final total of 2,924.20. The horse that helped his cause the most was Tampa Bay Derby winner Quip ($40.20 to win, $13.80 to place for a total of 538.20 contest points on that race alone).

Just completing the handicapping process was a challenge for Montgomery, who has been fighting a bad cold that debilitated him for over a week.

“I’ve been sleeping for about 12 or 14 hours a night even out here,” he said. “I came to the contest room today not having even looked at the last four races from Santa Anita.”

Those last four races saw HorseTourneys owner McKay Smith make a late charge that brought him within 146 points of the lead. But both Montgomery and Smith selected the same horse (6-1 shot Sekhmet’s Revenge) in the final contest race, which effectively blocked Smith. When second-choice Hope Wins won the race at odds of 3-1, no one could close sufficient ground on Montgomery, sealing his victory. 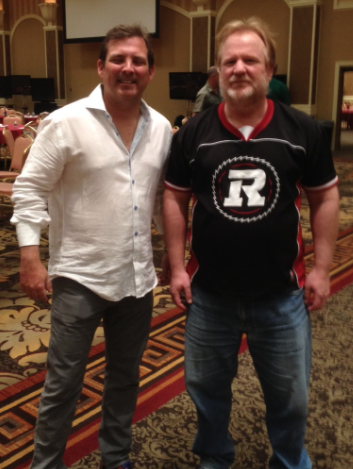 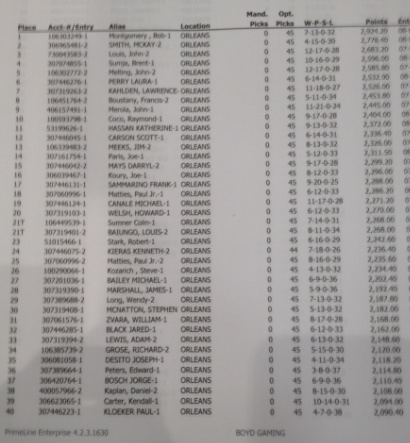 In the aftermath of his win, Montgomery was certainly proud, but still a bit subdued–and that was with with good reason. For the past two months, Montgomery and his family have been carrying with them the weight of the tragic passing of Bob’s cousin and best friend, Mike Montgomery.

“He committed suicide on January 11,” Montgomery allowed quietly. “He wasn’t a big horseplayer, but he would come with me to all the tournaments. He really supported me a lot at them. I’m sure he was ‘up there’ helping me. This victory here means so much to me and my family–not for the money, but to finally have a little good news to share in amongst all the sadness. This one’s for Mike.”