Fountain of Youth Day was a big one for many. Irad Ortiz Jr. rode five winners, including the day’s biggest, Promises Fulfilled. Dale Romans not only trained Promises Fulfilled—thereby insuring a Derby start as long as the horse stays healthy—he scratched the more highly fancied Free Drop Billy from the Gulfstream headliner to run him instead in this Saturday’s Gotham. It’s questionable, however, whether Ortiz and Romans were happier at the end of the day than HorseTourneys player Mark Thomason.

The Kansas City, Missouri native hit four of the first five contest races and five of the first seven before cooling off. The Pick & Pray tightened up at the end, especially with runner up Eric Moomey having picked Promises Fulfilled. But the late money that came in on Promises Fulfilled, which knocked his odds down from 21-1 entering the gate to 18-1 when betting closed, proved key in securing the $32,937 first prize in Saturday’s $50,000 Guaranteed Pick & Pray (our biggest Pick & Pray ever), which ended up with a total purse of $73,193.

Here’s a look at Thomason’s scoresheet.

We’re not sure if it was Dale Romans, Mark Thomason or a faraway bot betting Promises Fulfilled…but, as a result, Eric Moomey had to settle for second. Still, $13,174 wasn’t a bad consolation prize for the Albuquerque-based Air Force Lieutenant Colonel.

Back to the action! The weekend got off to a fast start with Friday’s $6,000 Guaranteed Pick & Pray, which finished with a final purse of $9,614.

Justin Nicholson ruled this roost with six winners out of ten races. Three of those winners came right out of the starting blocks. Then he hit a 16-1 shot and an 11-1 shot later on to secure the victory, which was worth $4,792. Perhaps at this year’s Equestricon, Nicholson will put himself on the panel of handicapping tourney experts!

The last-ditch push for Horse Player World Series entries commenced on Friday. As an appetizer for the next day’s Last Chance game, we were able to offer a qualifier that awarded $1,500 entries to a trio of winners.

Congratulations to Michael Brown, whose three wins came over the final five races, Barbara Buckley and 2017 The BIG One Champ Ed Peters. All three will be at The Orleans later this week (provided that Peters can escape snowy New Hampshire).

Saturday’s “co-feature” to our big $73,000 Pick & Pray was our last chance qualifier for the Horse Player World Series. What a turnout!

Special kudos go out to Mays who posted a monster score with six winners and a runner up from the 12 contest races.

Mays had Promises Fulfilled in the Fountain of Youth, but still would have finished second had he picked someone else.

The day’s third featured contest at HorseTourneys could have stood out as a “Grade I” all by itself on another day. And rightfully so, since it was a qualifier for the Keeneland Grade One Gamble.

HorsePlayers also was part of the fun on Fountain of Youth Day with a “regular” NHC qualifier.

Matt Strutzel and Robin Buser found the HorsePlayers proceedings the most fun in what was a very tight battle. Buser got the second NHC berth by going with Promises Fulfilled. Strutzel got away with missing the Fountain of Youth winner–though he did select runner up Strike Power, who paid $6.40 to place, which kept Strutzel out of what would have been a tiebreaker situation with Ken Seeman.

On Sunday, Academy Awards Day, it was a good idea to like 26-1 shot Smarter in the 8th at Gulfstream. In fact, as with good reviews for a movie, Smarter was a veritable prerequisite to success during the day.

This was certainly the case for Raymond Carpio who also added a 7-1 winner plus a pair of place collections to prevail (despite whiffing on the last four races) as the winner of $8,154 in Sunday’s $12,000 Guaranteed tourney, which ended with a purse of $18,120.

Lawrence Kahlden and William Degnan were both “Smarter” handicappers in the second Keeneland Grade One Gamble qualifier in as many days. 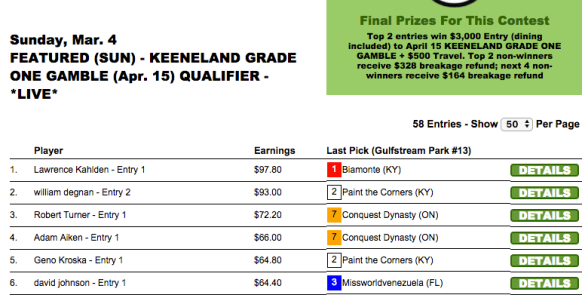 Kahlden—who recently won a featured tourney by having the winners of just the first and last races—today finished first with, again, two opposite-ends-of-the-extremes winners…at prices of 26-1 and 4-5. (He also added a couple of nice place payoffs.)

There was quite an impressive field assembled for Sunday’s TSG Ultimate Betting Challenge qualifier.

Finishing atop the leaderboard was Victor Mendes Sr., who many will recall won $40,000 in one of last year’s $100,000 Guaranteed tournaments. Look for the Boca Raton native to play the Ultimate Betting Challenge from his nearby track, Gulfstream Park. Mendes triumphed with Smarter and just one other winner plus one place horse.

Look for runner up Paul Shurman and bronze-medal winner Ed Reidy to participate on Sunday from Santa Anita. Both are from the East and could probably use an infusion of warm weather…but both are expected at the Horse Player World Series through Saturday and, well, The Great Race Place just makes a lot more sense coming from Vegas.

Elsewhere on Sunday, Pete Acocella was to HorseTourneys what The Shape of Water was to the Oscars—that is, the most prolific winner.

First of all, Acocella put his name (as far as we’re concerned) right alongside Native Dancer, Private Terms, Easy Goer and 11 other racing heroes by winning both our Gotham Challenge qualifier…

…and our Wood Memorial Challenge winner. And Acocella faced bigger fields than all those horses did.

Comparisons aside, congratulations as well to Michael Kavana and Damian Terenzio, who will be joining Acocella at Aqueduct on Saturday for the Gotham. And to David Harrison, who will take another run at Acocella come Wood Day on April 7.

By finishing second to Bob Gilbert, Acocella won himself a $2,500 package (as did Gilbert, of course) to the Monmouth Pick Your Prize contest in June.

Tony Calabrese was the one featured tourney winner on Sunday who reigned supreme despite not having a whiff of Smarter.

Perhaps not surprisingly, Calabrese’s win came in our $2,000 Guaranteed Exacta tourney that ended up with a final purse of $2,293. Calabrese had three winners from 12 races, but he was basically on the road to nowhere until he hit a $1 exacta box for $108 in the third-from-last race in the competition—the 9th at Aqueduct.

Smarter was back in his customary role as leading man (gelding?) in the featured event on Sunday at HorsePlayers.

Both Dan Brockman and Daniel Zaretsky had Smarter in our NHC Super Qualifier and will now, as a result, have the opportunity to play Vegas and win riches, fame and a statue come early next year.

You can play again next weekend for a chance to get your name in this blog and say “Me Too.” Time’s Up for me. Seriously, though, thank you for being a part of our Fountain of Youth weekend festivities, and I hope to see/meet many of you this weekend at The Orleans.