From a macro sense, there were two happy contest developments that took place over the weekend. 1) We got all of our Saturday featured tourneys in. Late Friday night and early Saturday morning, that seemed far from a certainty; and 2) Of the 13 featured weekend tourneys that took place, there were 21 first-prize winners. Not that there’s anyting wrong with someone ripping three or four victories off during a weekend (and, in fact, that can make a blogger’s job a little easier), but it’s always nice to see lots of happy winners as the victories get spread around.

The first of our 21 weekend winners was Rick Broth. 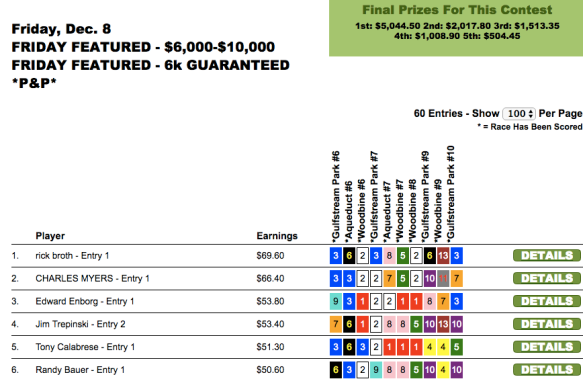 Broth came to a quick early boil by hitting five winners out of the first six races in our sold-out $10,000 Pick & Pray on Friday. His final four picks were strictly back-burner material. But early wins count every bit as much as late ones, and Broth prevailed in the quest for top money of $5,044.50. 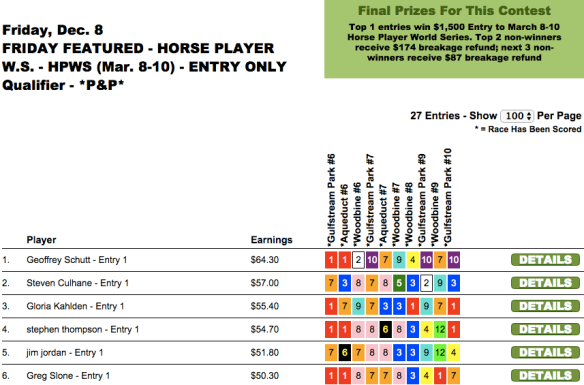 He only had one winner through the first eight races. But when he hit 13-1 shot Opening Remark in the 9th at Woodbine, his trendline in Friday’s Horse Player World Series entry-only qualifier looked like a 12-month price chart for Bitcoin. Schutt shot right to the top and stayed there through the 10th and final race to earn the $1,500 entry.

Over at HorsePlayers, Opening Remark was the coup de grace for Kerry Bassore.

Bassore’s margin of victory in the day’s $75 NHC qualifier was wider than the final scores might suggest. Runner up Lawrence Kahlden also won an economical NHC seat. He, too, had Opening Remark…but he needed a win from Furiosa (5-2) in the contest nightcap as well to secure that other available NHC prize.

Eagle-eyed readers of the Weekend Preview blog may have noticed that the Saturday featured tourneys originally had 12 races on Thursday morning…and then had 14 races by Thursday night. This was no typo. Rather, it was a realization that Hawthorne was suddenly due for snow that threatened its Saturday card (and our four Hawthorne contest races). So we added a couple of races from other tracks so that Hawthorne wouldn’t represent 30% of our Saturday featured-tourney contest races. (HorseTourneys rules specify that 70% of contest races must be run for a contest to “go.”)

Little did we know at that time, that by midday Friday, the Saturday weather reports for Aqueduct and Laurel would be as bad or worse as those for Hawthorne. And Gulfstream was out of the picture given that their last five races were dominated by Caribbean Classic Day horses with little in the way of handicapable form. So we then took the step that any rational person would take. We crossed our fingers.

Ultimately, everything worked out fine—even if it was a little harder than usual to see the races from Laurel and (especially) Aqueduct. 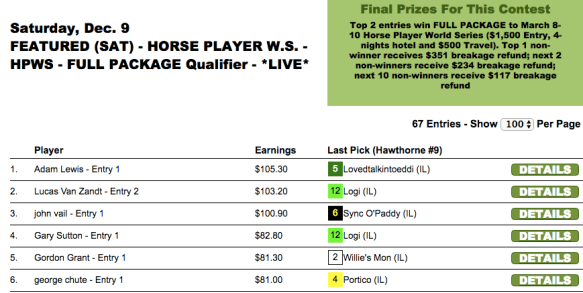 He hit four of the first five races. And then added three more winners over the last nine heats to edge Lucas Van Zandt and take the top spot. Van Zandt also won a full-package, though, and for him, it was his second HPWS full-package win at HorseTourneys since Thanksgiving weekend. At this rate, Van Zandt may be shooting for a full-floor, room-block takeover at The Orleans by the time March rolls around.

But no one else near the top had Sync O’Paddy either. And that was good news for Reidy—to the tune of $9,940. Lucas Van Zandt finished 4th, earning $1,656–good for about 15 HPWS full-package qualifier entry fees.

Failing to get a required pick entered is often the kiss of death—either for the points it costs you or the negative karma it can bring. But not for Anthony Laurino in Saturday’s NHC qualifier.

Unlike those in the $20,000 game, both Laurino and fellow package winner Michael Webb had Sync O’Paddy in the nightcap. And like so many (but not all) who did well on Saturday, they both had 21-1 winner Lady Gregoria (#8) in race 8 at Tampa Bay Downs.

Sync O’Paddy’s 7-2 win in the last contest race was also central to the NHC Super Qualifier results over at HorsePlayers.

Steven Turner did a Rick Broth/Adam Lewis with several winners right out of the gate. Chad Anshelewitz, meanwhile, had five goose eggs after five races. But he got hot from there, then had Sync O’Paddy in the last race, which wound up “blocking” Steven Turner’s pick of the same winning horse in that last race.

The weather was better on Sunday, and the day marked the return of our Pegasus World Cup Betting Championship qualifier. And what a qualifier it was.

Anthony “Doczilla” Trezza and Ken Jordan were the two $12,500 package winners in the 60-entry tourney. But, early on, things were looking a lot better for Jordan—and several others, for that matter—than they did for Trezza.

The Louisiana eye doctor had failed to see the merits of winning 29-1 shot Switched in Gulfstream race 6. Other than that, he was having a good day, but he was still well behind with four races left. But rather than desperately bomb away in the live-format contest, Trezza opted instead to chip away.

His picks in the last four races were so on point (they accounted for what would have been a mythical cold $2 Pick Four of about $900) that his “chip away” move turned out to be more of a “blow away” move. When the dust settled, Trezza had picked eight winners from 12 races.

It’s never a good feeling when a 29-1 shot wins in a contest and you don’t have it. And it’s an even worse feeling when you check the leaderboard and learn that plenty of others do.

Six out of the 66 entries in our Horse Player World Series qualifier had Switched in Gulfstream’s 6th. But with “only” three prizes up for grabs, having Switched guaranteed nothing. There were at least three Switched backers who would go away empty handed.

As it turned out, four—not three—Switched selectors came away with bubkus. While Robert Childress and Friday HPWS qualifier runner up Steven Culhane (who had Switched on two different entries) both successfully parlayed Switched into a $1,500 HPWS entry, one player who failed to play Switched managed to claw his way back into a prize-winning position. So congratulations to Paul “The Professor” Link for reminding us yet again that it’s never over until it’s over.

Stephen Lerma was the top cash winner on Sunday.

In our other featured Sunday cash game, the $2,000 Guaranteed Exacta tourney, it would be an understatement to say things came down to the last race.

When the $1 exacta in the last contest race (the 11th at Woodbine) came back at $544.60, it turned the standings upside down in a way that would have made Frisk Me Now blush.

Fortunately for Joe Johnson, he had about $24 more than Geoffrey Billet (last Sunday’s $12,000 game winner) heading into that last race. So Johnson received the top prize of $1,369. Perhaps this is one time when the sometimes-heard, post-race contest whine of “I hope you played that horse with real money” may actually be uttered with some measure of sincerity.

The Sunday qualifier for the Hawthorne Holiday Extravaganza was a tight battle between John Ukelja and Ken Kieras.

Fortunately for them (especially Ken), there were two prizes on offer. So they both won.

And over at HorsePlayers, the day’s top event was an NHC qualifier.

John Ferraro and Steve Nemetz were the two who “got qualified” out of this event. Things were particularly exciting for Nemetz, who wasn’t a winner until Midnight Brew ($13.40, $8.00) won the final contest race, the 11th at Woodbine.

All in all, it was a fun weekend filled with fast starts, momentous finishes, lots of winners and even some “exciting” weather to keep things extra interesting. Thanks for being a part of it with us.