In a run of contest excellence that HorseTourneys president McKay Smith called “unprecedented,” Howard Welsh of Basking Ridge, N.J. followed up last Saturday’s win in our $100,000 guaranteed tournament with back-to-back victories on Saturday and Sunday in our $25,000 and $15,000 guaranteed games, respectively.

“I’m speechless,” said the 53-year-old finacial planner for New York Life. “I know I will never have a streak like this again.” 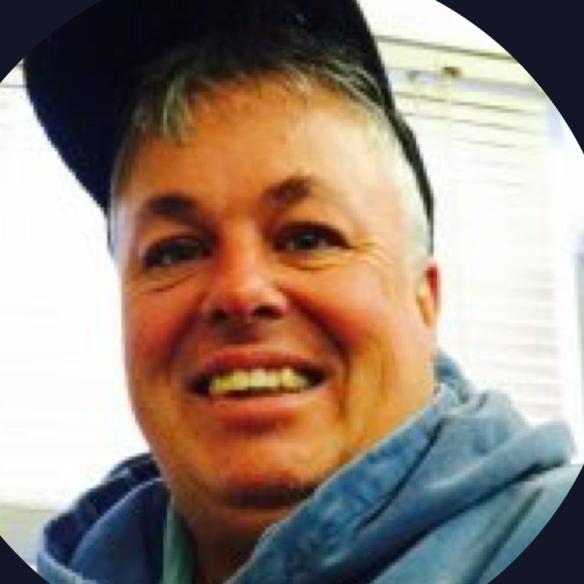 The weekend didn’t figure to be a promising one for Howard when he studied the HorseTourneys weekend schedule. The featured menu was dominated by live-format tournaments, and (as noted in last week’s blog) he had always considered himself much more effective in Pick & Prays.

To make matters worse, Howard would be spending the weekend in Amherst, Massachusetts for Parents’ Weekend at UMass, where his daughter Hannah is a freshman. Make no mistake, Howard was delighted and proud to be spending the weekend on campus with his daughter (and wife Stacey) and attending the various functions that go hand-in-hand with such a gathering. But it just didn’t seem conducive to success during a weekend of live-format handicapping contests. (A predicament we’re guessing that not many other UMass parents shared.) 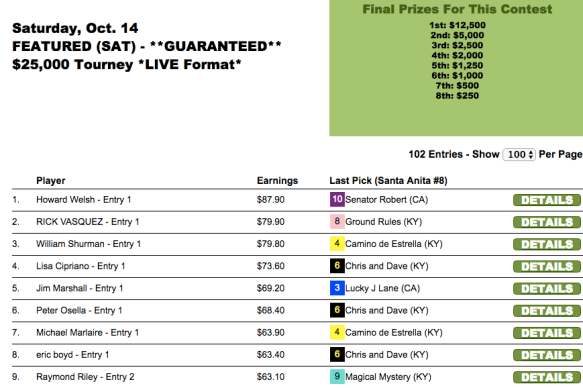 “I played it as a Pick & Pray,” he admitted. “I ran the PPs through my program on Friday morning and put in my picks then. I wasn’t expecting too much. When I first looked, I was 7th, then 5th, then 3rd, and finally first. At that point, I considered taking a look at the PPs for the last two races, but was at dinner and figured I didn’t want to go against what was working.”

Perhaps he should have looked at the PPs, because Howard whiffed on those last two, including 11-1 winner Got Even in the 8th from Santa Anita, which was the final contest race. But those close to Howard in the standings failed to connect as well.

“I was very fortunate in no one having the winner of the last race—which is exactly the type of horse people land on in live money [contests],” he said on Saturday night. “Last week I completely deserved to win. This week I was very lucky.”

What Howard didn’t realize was that the week was not yet over.

Maybe it was the hot streak. Maybe it was the erudite surroundings. Or perhaps by Sunday Howard had simply sat through one academic lecture too many, but at 2:10 p.m. that afternoon he found the time to enter his picks for that day’s $15,000 guaranteed tourney. 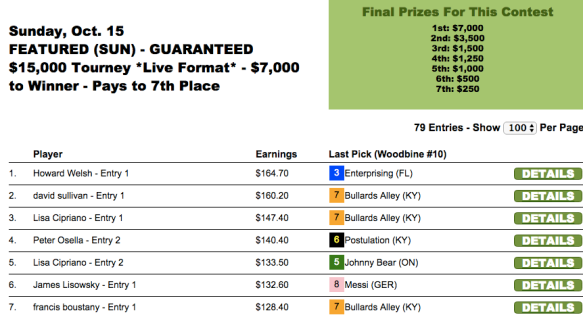 Again he won. And again he did not change a single pick once the live-format contest began shortly before 4:00 p.m. (Note that Lisa Cipriano was 4th behind Welsh on Saturday and 3rd and 5th behind him on Sunday!)

“It was my best day yet in terms of score,” he said. “I’m just very grateful.”

Adding up the proceeds from his three tournament wins, Howard earned a total of $59,500—possibly enough to cover a year’s worth of expenses even at a leafy Northeastern school. Though if the bursar says that he needs to cough up some more, Howard can always look forward to the Horse Player World Series.

Because Howard used his Sunday picks to when a $1,500 entry to that event as well. So Howard’s nine-day total is up to $61,000…as long as we only count his featured-tourney tallies.

Fortunately for everyone else, Welsh only played his $164.70 slate of Sunday horses in those two contests. It still required a pretty lofty total to finish first, however.

Eric Israel did the trick in Sunday’s NHC Super Qualifier. 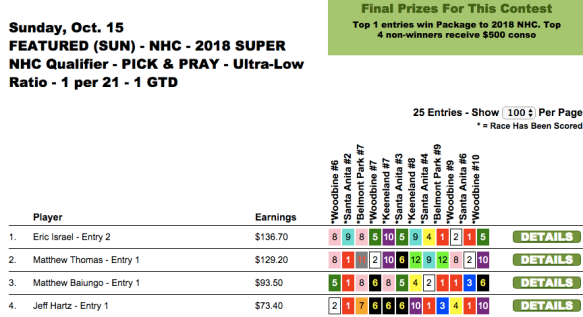 Hitting the last two Woodbine stakes, including the 42-1 capper in the Woodbine International, did the trick for Karl.

The $1 exacta (exactor?) in that Woodbine International paid a whopping $342.90.

And that put Gary Prideaux over the top for a nice win in our Sunday Guaranteed Exacta tourney.

At HorsePlayers on Sunday, Peter Osella (2nd in the Caribbean Classic qualifier) scored what would have been the premier, attention-grabbing tournament victory of the weekend if not for Howard Welsh’s exploits. 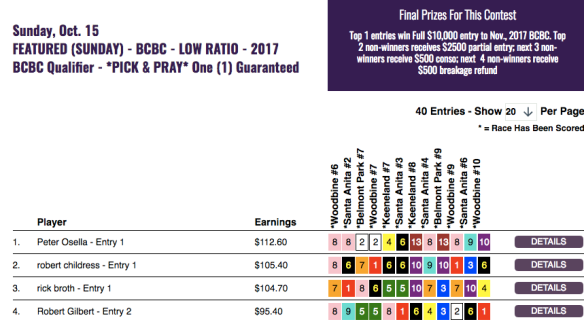 The win was the third featured-tourney win in nine days for Osella. And it’s not like he strung a bunch of wins from one set of picks. On October 7, he won a $10,000 BCBC entry in a $179 qualifier. The next day, he took the $7,000 top prize in our Sunday $15,000 Guaranteed game. And now he adds yet another BCBC entry to his portfolio.

There were other impressive wins on Friday and Saturday. 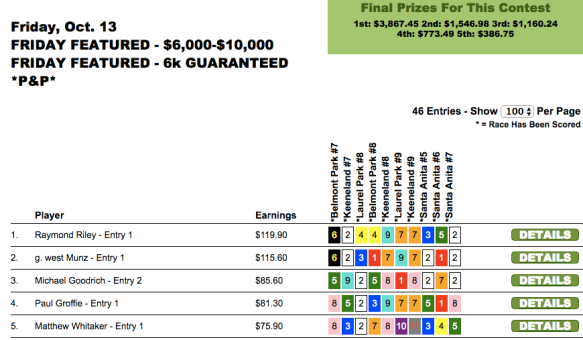 The “Life of Riley” was good for James Riley as well. 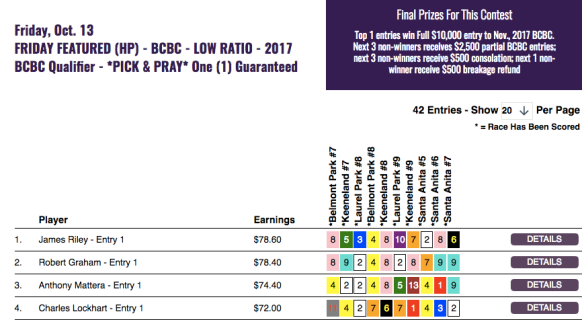 He had the winner in five of the first seven races at HorsePlayers, then held on for dear life to snag a BCBC entry by just 20 cents over a hard-luck Robert Graham.

Back at HorseTourneys on Friday, Robert Wada won by just 60 cents…

…in garnering an NHC berth for just $75 in Friday’s qualifier. Runner up Bob Gilbert was already double-qualified, so the second NHC berth slid down to third-place finisher Mark Feld, whose score of $110.50 was just $1.30 out of first place.

Unlike Howard Welsh, Daryl Pourciau DID have 11-1 winner Got Even in the 8th at Santa Anita on Saturday…

…and that propelled him to an NHC berth along with Timothy Hughes who did not have the last-race longshot.

At HorsePlayers on Saturday, Rocky Hardy and Gary Blair captured the available BCBC entries in the day’s Super Qualifier.

Ace clocker Bruno DeJulio was third—good for a $1,000 consolation prize.

And speaking of expert horse watchers… 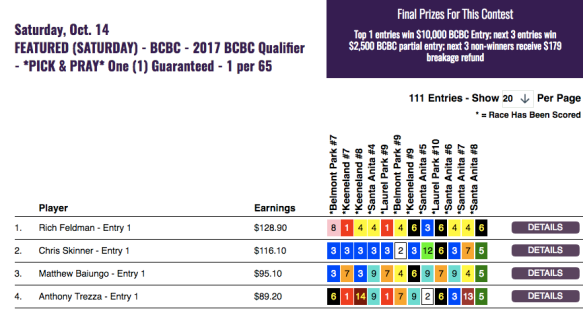 …chartcaller Rich Feldman normally gets paid to correctly note the order of finish after the race. On Saturday he was rewarded for predicting it before the race. He was the winner of a BCBC entry in the day’s regular, $179 qualifier.

Whether you were at the track, in your living room, or on a college campus, we hope you had an enjoyable weekend. And we thank you for spending part of it with us.