Ed Peters started the second and final day of The BIG One with just $200 left from his starting bankroll of $1,000. And it went downhill from there.

A 46-year-old resident of Pelham, N.H., and the owner of a bread distribution company, Peters saw even more dough leave him when he made a losing $100 bet on Sunday’s first race from Belmont.

“It was brutal,” he said. “I hadn’t cashed one ticket, and my horses weren’t even running well. They were all up the track.”

From there, Peters staged a near-miraculous, roller coaster-like comeback to finish with $5,400—best of the 56-person field at The BIG One at Laurel Park.

The victory earned Peters $36,400 from the prize pool, a $10,000 Breeders’ Cup Betting Challenge entry, his final bankroll total of $5,400, and another $5,000 in lieu of a National Horseplayers Championship (NHC) entry, which Peters was no longer eligible to win due to already being double-qualified to that event. And as the winner of The BIG One, Peters is now eligible for a $500,000 lump-sum bonus should he finish first with his designated NHC entry next February.

Making what he thought might be his last bet of The BIG One, Peters spread his last $100 among three horses in Churchill Downs’s 3rd race, a mandatory contest race. One of his three was #12, American Ride who won and paid $31.60. Peters had $20 to win on him to stay alive with $316.

Soon thereafter, Peters had $50 on a 5-2 winner in Belmont’s 3rd race, and things were looking up.

“But from there, I took some small swings, and none were fruitful,” Peters said. “I was back down to $50.”

There are five mandatory races each day at The BIG One, each requiring a wager of at least $50. So when the mandatory race 7 at Belmont came around, he was forced to go all in. He played a $50 win bet on Proper Freud who won and paid $15.60, giving Peters a new total of $390.

Feeling emboldened, Peters keyed $340 in exactas using the 3-5 favorite Fourstar Crook on top in the 8th at Belmont. The favorite got the job done, but Peters’s other horses failed to fill the second slot and so—yet again—he was back down to $50.

He played that $50 successfully to win on Stay Home ($7.40) in mandatory race 9 from Laurel. And he was itching to plow most of that $190 into a 9/4,10 exacta part wheel in the soon-to-be-run 10th race at Churchill Downs. But technically Peters had no money in his betting account until the Laurel race was made official. He waited…and waited. And just seconds before the Laurel race finally went official, the gates opened at Churchill Downs. Peters then watched helplessly as #9 Pat’s Shoes won at 7-2 odds and #10 Star Dog ran second at 31-1. The $2.00 exacta—that Peters didn’t have due to temporary illiquidity—paid $237.40.

“I was pouting like a baby,” he admitted. “I would have had nearly $8,000 had I had the money from the Laurel win in time to make the play I wanted to make at Churchill.”

Trying to regain his composure, Peters turned his attention to Gulfstream’s 9th race. He boxed a pair of 7-1 shots, numbers 9 and 14, for $20 each way, and when the result was 9-14 and the exacta paid a whopping $197 for a deuce, Peters was suddenly up to over $2,000 with still a few races left.

Peters was up to fourth place, not far out of second. But he and the others near the top were still a couple of thousand behind Eric Moomey, who was coasting along in front on the strength of a $1,000 all-in wager he made in Saturday’s 3rd at Belmont. When Warranty won that race at 3-1 odds, Moomey had instantly and quickly quadrupled his bankroll to $4,000—a figure that The BIG One contestants were having great difficulty approaching.

In a driving stretch battle, Texas Zip ran down Team Tim late—and then survived a claim of foul from the fourth-place finisher—to provide an exacta that paid $124 for $2.00…and that added $4,340 to Peters’ total, which was now good for the lead at $5,542.

There was now a new target for the other players—including Moomey.

“I figured I’d take things easy until someone challenged me,” said Moomey, a Lieutenant Colonel in the U.S. Air Force. “And by the time someone did, there were only a couple of races left. All in all, it was a great tournament and a great weekend for me.”

Like Moomey had done for much of the tournament, Peters played the last race—the 11th at Laurel—conservatively. But Jon “Hurricane” Hurd didn’t.

Sitting in 15th place with $1,047, the ebullient Louisianan who makes up one-third of what he calls “Team Whodat” (along with Michael “The Champ” Beychok and Anthony “Doczilla” Trezza) decided to risk nearly all of his bankroll. He played a few exacta boxes, including $60 on 3-9, plus $250 to win on #3 Love’s Legend, a 7-1 shot.

Unfortunately for Hurd, the order of finish at the wire was 7-3-9-8. The 7 horse, Goldmakesmesmile, was a 17-1 longshot. Peters didn’t have her or anyone else that was close at the finish among his $142 worth of plays. But given how silent the tournament room was at the end of the race, he felt hopeful that no one else cashed the race to any meaningful degree.

But then the winner’s number started blinking on the toteboard. Steward’s inquiry!

Hurd began darting around the room, clutching a religious chain he was wearing and holding it to his mouth. He was fairly quiet at first. But then after it was announced that the fourth-place finisher had claimed foul against the winner, Hurd realized there was a chance that the winner could be moved all the way down to fourth, which would mean not just the salvation of his win bet, but a score on the 3-9 exacta too.

“At that point, I just started praying,” Hurd said.

After what seemed — even to those without money on the line — like an interminable wait, the stewards posted their decision. Disqualification. Revised order of finish: 3-9-8-7! 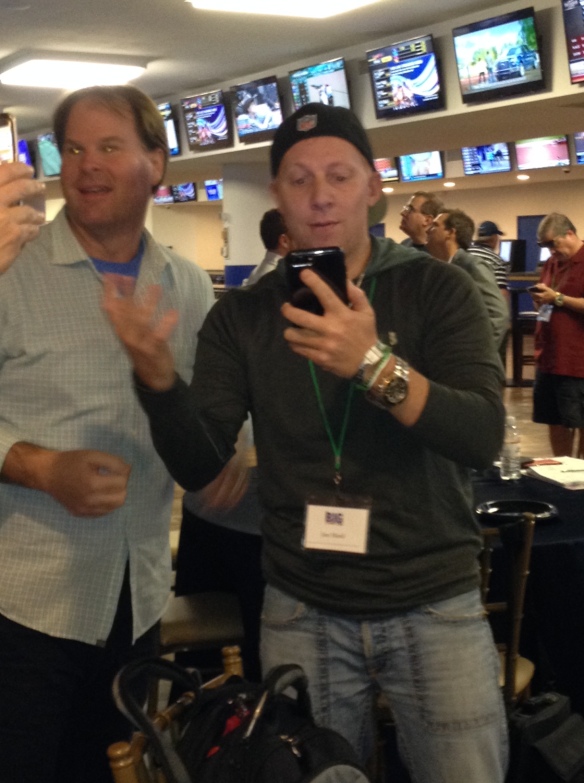 Jon Hurd (right) nervously reviewing his list of wagers on his phone with Michael Beychok just after Laurel’s final race is made official.

“Boom! Whodat, whodat, whodat!” exclaimed the Hurricane over and over. By now, he was bouncing around the contest area like Jim Valvano after the North Carolina State 1983 upset of Houston.

There was virtually no other cheering in the room. Could it be that the payoff would move Hurd all the way past Peters?

“I didn’t really know him, and I obviously didn’t know how much he had bet,” said Peters, who sat at an even $5,400 after the $142 loss in the final race. “So I was standing there trying to handicap the handicapper. If it were a real quiet guy jumping around and screaming, I’d have figured I was in big trouble. But I did know that he was a high-energy guy in general, so I thought it was possible he might have had a really good hit, but not a big enough one to pass me. At least that’s what I was hoping.”

When the prices were finally posted, Love’s Legend’s win mutuel of $17.00 and the $81.60 (for $2) exacta garnered $4,579 for Hurd, making his final total $4,580.45–good for second place. It was certainly a “Category 5” level comeback, but no damage was done to the Peters home. Despite the several close calls with bankruptcy earlier in the day, Ed Peters was The BIG One champion.

“This is my biggest tournament score for sure,” he said. “And winning a live tournament like this is better than finishing second or third at any tournament anywhere. What an incredible day. I’m numb.”

Hurd won his live bankroll, plus $18,200 from the prize pool and seats to the BCBC and NHC. But he and Peters were far from the only winners. Eight BCBC seats and 10 NHC spots were awarded. And those finishing in 11th-20th places received their choice of a Horse Player World Series entry or $1,500 cash in addition to their final bankroll total amounts.

The top 11 finished as follows (additional winnings beyond bankroll in parentheses):

This year’s fifth renewal of The BIG One offered a record overall value of $355,000, including $106,000 in prize money and an array of other tournament seats benefits.

A link to the complete order of finish appears below:

7 thoughts on “Down to His Last $50, Ed Peters Storms Back to Win The BIG One”