It was already a pretty good September for Dan Shugar. The Los Angeles business owner had won $12,500 on Saturday, September 9 when finishing first in that day’s $25,000 Guaranteed Pick & Pray. 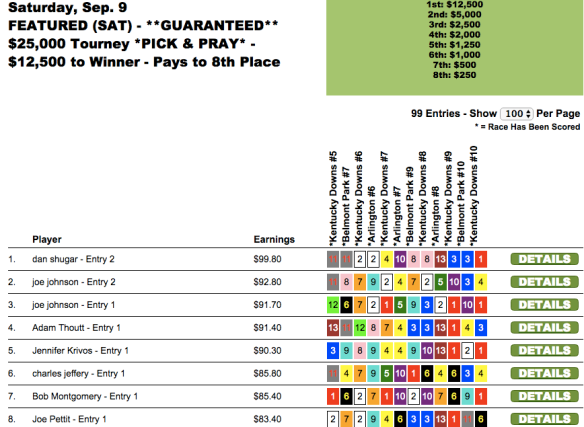 The 51-year-old added to his September accounts receivable on Sunday finishing atop the heap in our $15,000 Guaranteed event. 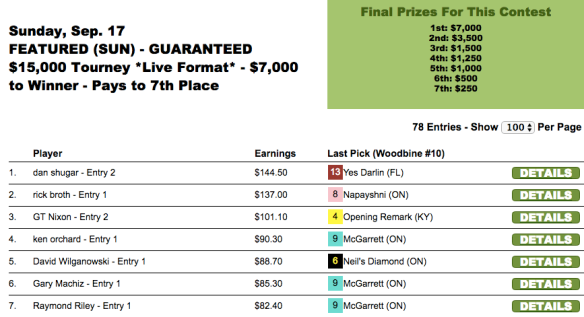 That makes $19,500 for Shugar so far this month. And, unfortunately for his competition, September isn’t over yet.

Fortunately for the 52 players (plus up to five buy-in slots) competing in this coming weekend’s The BIG One at Laurel, Shugar is not in the field. Tim Darnell and Richard Seidl ARE in the field, however…

…thanks to their performances in Sunday’s Last Chance qualifier.

Like the other 50, Darnell and Seidl will compete for eight BCBC entries, 10 NHC spots, 10 Horse Player World Series entries (or $1,500 in cash) plus another $80,000 or so in cash. That is in addition of course to the live-bankroll earnings players rack up; and in addition, of course, to the hospitality and free accommodations on offer—not to mention the $500,000 lump sum bonus on the table for The BIG One winner should he or she go on to win the 2018 NHC. It should be a terrific weekend.

Richard Grose of Wentzville, Mo., got the weekend off to a fast start with his win in Friday’s $6,000 Guaranteed Pick & Pray.

The next best thing to qualifying for the NHC in a free qualifier is to win one of our popular $50 qualifiers at HorsePlayers. 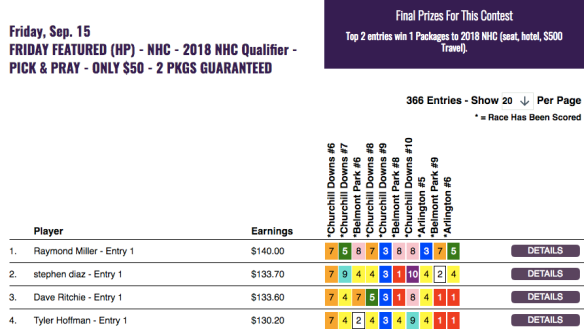 Raymond Miller and Stephen Diaz did just that on Friday. For Diaz, the NHC seat had to be particularly exciting given the fact that he held second-place by a mere 10 cents. (If you see third-place finisher Dave Ritchie at a wagering facility near you, buy him a beer!) 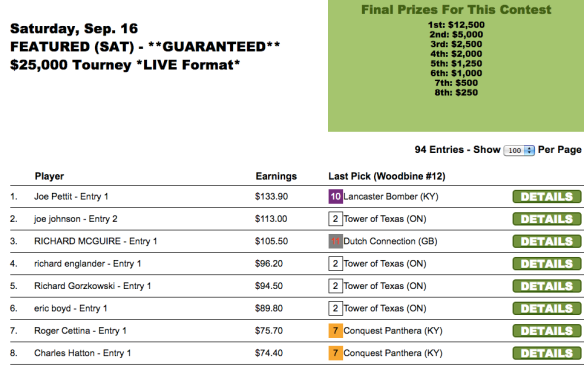 Congratulations to the always-formidable Joe Pettit of Charleston, S.C. on his $12,500 hit. Joe Johnson, was second. And he was also second–and third!–behind Dan Shugar in the September 9 $25,000 game. And note that two-time Eclipse Award-winning owner Richard Englander checked in fourth.

Pettit and Shugar and our other many terrific cash-game players undoubtedly have October 7 circled on their calendars. That’s the date of our next $100,000 Guaranteed event.

John Nichols had almost as high a score as did Pettit.

The scores were tighter in Saturday’s Orleans Fall Classic qualifier.

Congratulations to John Hawkins, Thomas Kirchoff and Shea Harrod who each emerged with $500 entries for the Orleans event on Oct. 5-7.

Over at HorsePlayers on Saturday, there were a pair of BCBC qualifiers. They were offered at two distinctly different price points as players make a push to win an entry during the last few weeks prior to the Breeders’ Cup.

In our $500 Low Ratio qualifier, Robert Schneider was a convincing winner and runner up Todd Cody won a partial ($2,500) entry. Schneider hopes to “make a copy” of that finish come Breeders’ Cup time.

There will be more chances to qualify each and every weekend between now and Cup weekend.

Sunday was, as usual, the busiest day of the weekend with several featured tourneys n addition to our final 2017 qualifier for The BIG One and our $15,000 game. Two of our featured-contest winners were Brett Wiener and James Henry. And both used cap horse winner McGarrett (#9 in Woodbine race 10) in the final race of their respective tourneys to claim victory.

Wiener used the wire-to-wire grass winner to catapult himself to the top spot at the end en route to a Gulfstream Park Pick Your Spot spot.

Henry’s use of McGarrett in the Del Mar Fall Classic qualifier was as part of a Pick & Pray event. A different dynamic for sure—but every bit as effective.

Somewhat surprisingly, McGarrett was no prerequisite for success in Sunday’s top games.

Cheryl Tayala, Eric Liebmann and Paul Kloeker were the three winners in Sunday’s Keeneland NHC/BCBC Challenge live-format qualifier. But Liebmann was the only one of the three to book McGarrett onto his ticket.

…but no such prescription was necessary for contest winner David Snyder.

The two featured tourneys at HorsePlayers on Sunday were both Pick & Prays.

Robert Ramirez and Dennis Klein were the victors in Sunday’s 2-seat-guaranteed NHC qualifier. 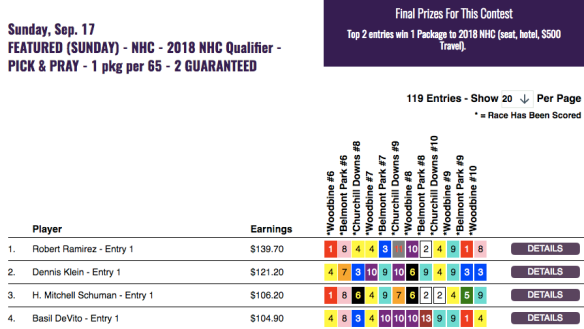 Neither Ramirez nor Klein had McGarrett.

Patrick McGoey, the dominating winner of Sunday’s BCBC Super Qualifier DID have McGarrett.

Heading into that last race, though, McGoey (the two-time BCBC winner) was already leading the contest. So had he picked a different horse, he still would have won.

Thanks to all for playing (and reading). I look forward to seeing many of you this weekend at Laurel.