Stateler, a native of Owensboro, KY, entered the last race of the contest toward the back of the pack with $191.50 remaining in his live-money bankroll, which had started at $300. But his decision to go “all-in” with more than $150 to win on Pitch Count in the finale catapulted him to the top of the leaderboard with a final bankroll of $1,857.80.

“I had a little luck early, then lost a few races,” Stateler said. “But I had a couple of hundred dollars left, and I actually just bet it on the winner and got really fortunate. I’m very thankful, and Ellis Park did a great job. I love live-money formats. To me, that’s the thing.”

Stateler said Monday’s solar eclipse will cross over where he lives south of St. Louis. “It’s coming over our house, so we’re having a party,” he said. “Maybe we’ll have better liquor now.”

It will be Stateler’s first time competing in the NHC, the nation’s most lucrative handicapping contest, although he’s previously competed in such big contests as the Horse Player World Series and the Kentucky Derby Betting Challenge. 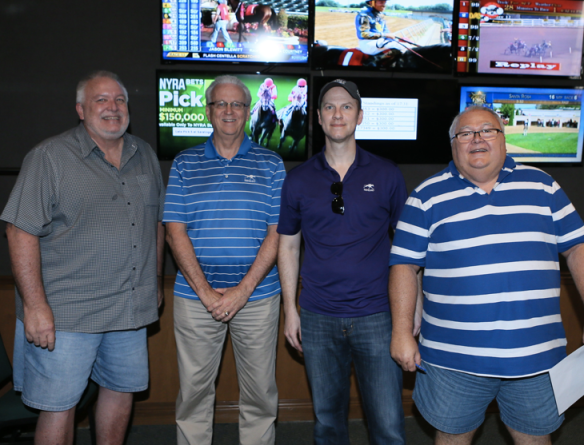 The top four players from the Bluegrass Tournament each earned a seat to the National Horseplayers Championship, to be held next Feb. 9-11 at Treasure Island in Las Vegas.

Jim Goodman, the Simulcast Director and tournament administrator at Keeneland, finished second with a final bankroll of $1,411.50. Goodman led the field going into the final leg of the contest by nearly $200 and bet conservatively in the last race despite also placing a solid win bet on the 11-1 winner.

Clay Sanders of Memphis, TN, and Richard Grose of Wentzville, MO, finished third and fourth respectively and will also be heading to the NHC. Both Goodman and Grose secured their NHC seats with last-minute purchases of second entries; players were allowed to purchase a maximum of two entries to the Bluegrass Tournament.

Second-place finisher Goodman and third-place finisher Sanders were ironically and unknowingly linked on Sunday as Sanders also played a HorseTourneys qualifier that day in which he won a $3,500 package to the October 15 Keeneland NHC/BCBC Challenge–a tournament run by Goodman. 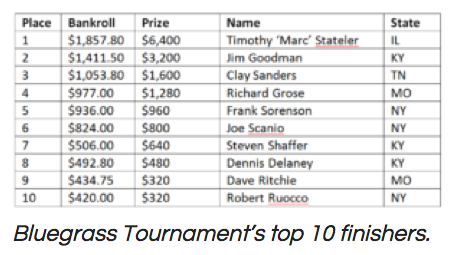 “As a contest player myself, I am so pleased that Ellis has sponsored its first NHC tournament since 2011,” said Ron Geary, Ellis Park’s president and majority owner who finished second in the 2011 NHC. “I was so proud of the quality of racing presented today at Ellis Park and that so many contestants really enjoyed being here and promised to be back.”