When you’re on a roll, it’s probably wise to keep playing. That’s what Wynn Handicapping Challenge winner Nick Fazzolari did. 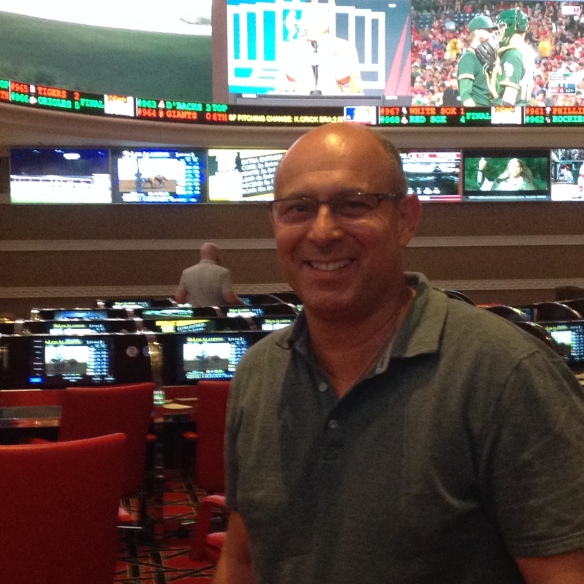 Just six days after the Colts Neck, NJ financial services advisor collected $154,000 (and opened up 529 college savings accounts for his two daughters and six other nieces and nephews), Fazzolari invested another $50 of his profits in Friday’s $50 BCBC qualifier at HorsePlayers.

Smart move. This one for Nick was a 200-bagger, as they might say on “the street.” If those 529 accounts perform half as well, the next generation of the Fazzolari clan will not only be able to attend college, but perhaps have a couple of campus buildings named after each of them. 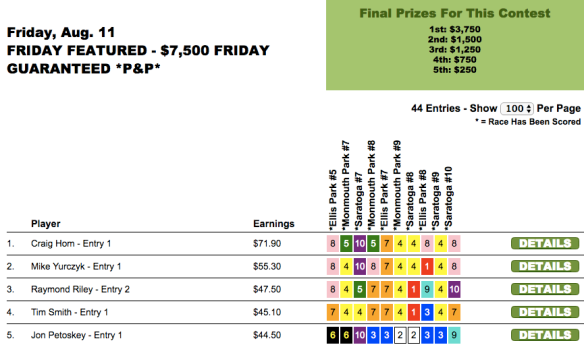 Saturday offered five featured games. And the most noteworthy performance came in what was, by far, the lowest-profile game of the five. 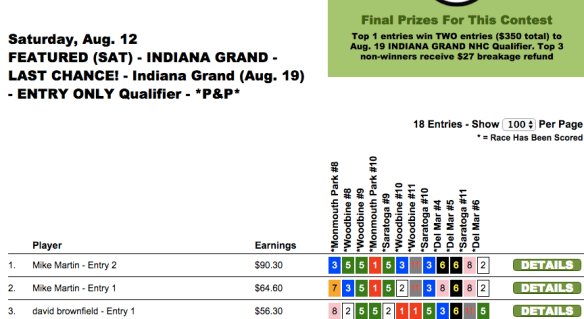 Yes, it was notable that Mike Martin placed first and second with his two entries. That is never easy to do. And yes, that $90.30 winning score was the highest of the day in our featured events. But those feats take a backseat to the true rarity that Martin pulled off.

Martin collected in all 12 contest races—something made arguably even more impressive by the fact that the Indiana Grand last chance tourney was a Pick & Pray. There were no tight, end-game circumstances that dictated consistent scoring attempts. He just let it fly that way. And fly it did.

Martin was clearly “seeing the ball well” on Saturday, and that translated to a victory as well in our first qualifier for the October 15 Keeneland NHC/BCBC Challenge.

Congratulations to Colin Roach who grabbed the other available $3,500 Keeneland package after besting all but the white-hot Martin. Several more Keeneland qualifiers still to come!

Rick Vasquez was a very deserving winner of the weekend’s richest tourney—our $15,000 Guaranteed event on Saturday.

His winning score of $88.80 was amassed on the strength of six winners and two places from the 12-race menu. Look for a purse increase going forward for our Saturday featured cash game!

And over at HorsePlayers, Matthew Ache and Joe Jarvie each nailed the last race Del Mar winner Tomasina ($9.20 to win, $4.00 to place) to earn their berths in the 2018 NHC.

On to Sunday…Peter Duca won our last $10,000 Guaranteed Sunday game.

Why is it our last such game? Because thanks to your strong support, we are upping the pot to $15,000 next Sunday.

Joe Walzog and Joel Wincowski became the 39th and 40th (out of 50) online qualifiers to The BIG One.

Actually this was the second The BIG One qualifying victory for Wincowski, a college administrator from Maine, who also won the year’s first The BIG One qualifier. The BIG One rules state that a player may only play one entry in The BIG One. That’s the bad news for Wincowski. The good news is Joel can transfer that second entry to anyone he pleases. Based on the fun Joel’s wife and son had at The BIG One last year, we’re making them each 4-5 co-favorites to get the nod. Though late money from married men may knock Mrs. Wincowski down to 2-5.

Another place you can win a seat to The BIG One is at the Laurel Champions Tourney next weekend. Our lone qualifier for that event resulted in three winners on Sunday…

Sunday was also the last chance to earn an entry online to the Ellis Park Bluegrass Tournament.

Dave Fowler, and Joe Steinberg will now have the opportunity to play in this generous, 100% payback contest that includes four NHC seats to boot.

It was a day of “first chances” where the Horse Player World Series and Orleans Fall Classic were concerned.

Our first qualifier to the HPWS went to Josh Thorpe and Phil Hoedebeck, who each won $1,500 entries.

The Orleans Fall Classic qualifier was even more popular (it’s coming up much sooner), allowing us to “pay off” to five winners. 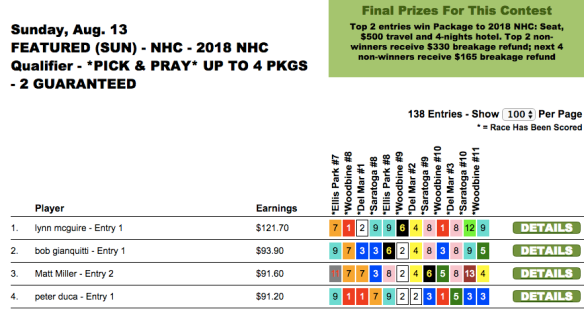 That’s because Lynn also finished first in Sunday’s NHC qualifier (and by a wide margin, I might add). Lynn and Bob Gianquitti will now be part of the Treasure Island extravaganza next February.

Gary Blair was the winner of a package worth approximately $3,200 to the Woodbine Mile Handicapping Tournament.

Gary will compete for a BCBC seat, and NHC berth and lots of cash in Woodbine’s biggest onsite tournament of the year on September 16.

In our Sunday $3,500 Guaranteeed Exacta Box tourney, we had one of our tightest finishes ever.

Brian Graziano and Charlie Ricks both whiffed on their final two plays. But they prevailed nonetheless to capture the top prizes of $1,400 and $900, respectively. With no cap in place for our exacta games, one is never out of the running. And yet, we still often wind up with close finishes just like Sundays.

Speaking of fun, there were a pair of Breeders’ Cup Betting Challenge qualifiers at HorsePlayers on Sunday.

…was captured by Brian Johnson.

Joining Brian in the BCBC field with a $10,000 entry will be Robert Turner, who thrashed the competition in our “Low Ratio” BCBC qualifier.

Robert had the tourney’s final three winners and collected on his final five plays.

These “Low Ratio” BCBC games have been quite the hit thus far. Look for an even bigger and better low ratio qualifier next week with two BCBC entries guaranteed (up from one).

Thanks for your contributions to a very successful weekend of online tournament play. We’ll have some new qualifiers up next week for events at Santa Anita and Gulfstream. And we’ll have several more of our fun new pool-style Survivor games where the pot keeps rising with each incremental entry.

Have a great week ahead. Let’s all make the most of these last few weeks of summer!