On Wednesday, Terence Cook built his starting bankroll up to $6,890 as he captured the first day of the Saratoga Challenge.

Things weren’t looking as good for him on Day 2.

Cook had just lost a $750 win bet on Race 6 favorite Munchkin Money and was down to $210 heading in to the 7th race. Consulting over the phone with fellow Baltimore-native playing partners Mark Komen, Jeff Komen, Marc Saperstein and Bob Schmidt, they agreed to go all-in on a race 7 exacta using the 6-5 favorite Sudden Surprise on top and 36-1 shot Pegasus Red second. It was Jeff Komen who had convinced the group that Pegasus Red was a good tactical fit for the race.

“We were playing the track.” said Cook, 59. “It looked like you wanted to be inside today, and that’s where Pegasus Red was drawn.”

When Sudden Surpise and Pegasus Red finished first and second and the $2 exacta payoff of $98.50 was posted, Cook had vaulted all the way to first place with $10,342.50–roughly $7,500 more than anyone else.

“At that point, I was just giggling,” said Cook, who spent most of the day at his favorite spot at the track– the end of the second floor overlooking the backyard.

No one could come close to catching Cook thereafter and the retired auto industry business owner had won Thursday’s first-place prize of $19,350 plus his final bankroll total of $10,092.50. He also earned a Belmont Stakes Betting Challenge entry for a second straight day. His total earnings for the two days: $53,162.50 plus the two Belmont Stakes Challenge entries worth $10,000 each. 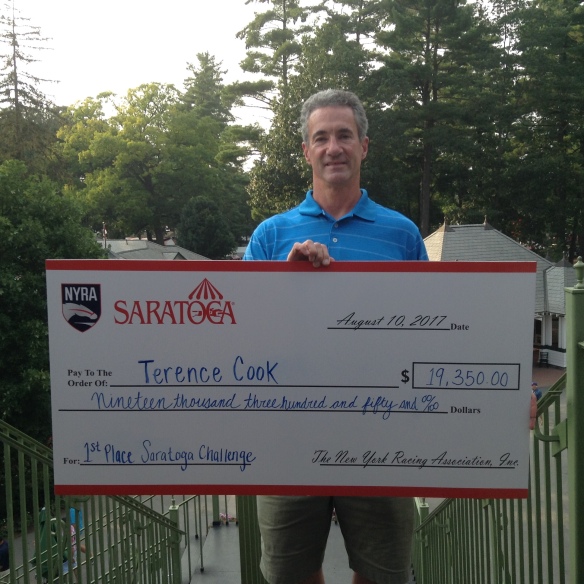 “Not bad for someone who wasn’t even supposed to be here,” said Cook. He wasn’t referring to a busy personal schedule, but to a successful battle he waged in recent years against esophageal cancer.

Cook will now move on to contests at Laurel, Monmouth and Delaware Park over the next three weeks. “I want to keep playing, but I also don’t want to give it all back,” he said with a laugh. 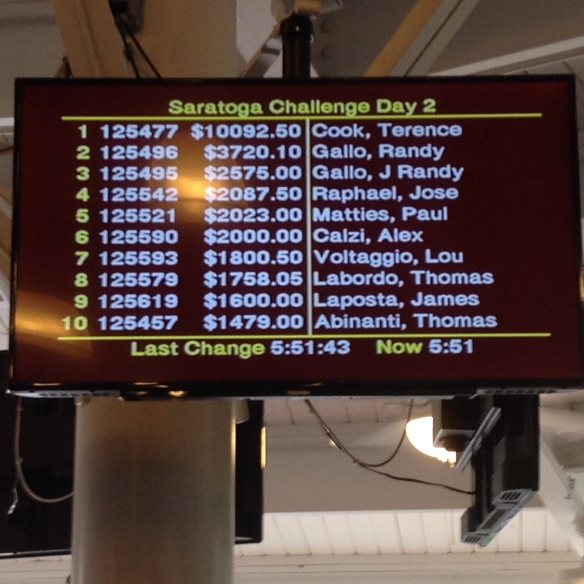 Today’s Saratoga Challenge, which carried a $1,000 entry fee and started players off with a $500 live bankroll, attracted 165 entries–12 more than competed yesterday on Day 1. Players each day were required to make at least five plays of at least $100 each on Saratoga races.