On opening weekend of both the Saratoga and Del Mar meetings, our marquee tourney was Saturday’s $75,000 Guaranteed event. The $30,000 first-place finisher was Kirk Tesar of Plymouth, Indiana. And–perhaps in true Hoosier fashion–his victory was workmanlike rather than showy. 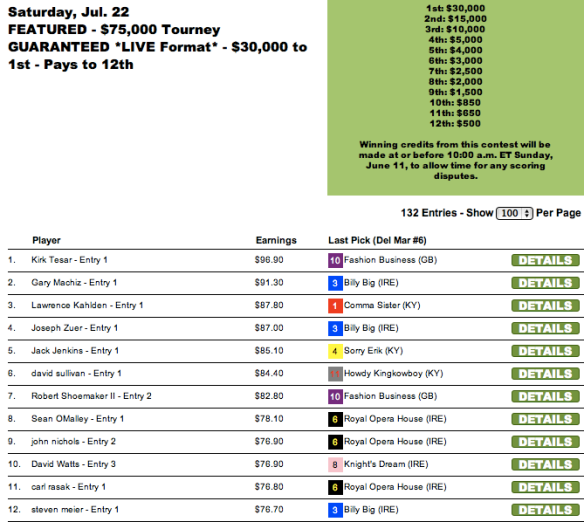 Tesar hit two 7-1 shots in the 13-race contest. His other two winners were 4-1 and 3-1 propositions. He also had three place collections, including one in the final contest race at Del Mar with Fashion Business ($5.00). Tesar held a very slim lead going into that last race, and hewas the only player in late contention to chip up in the last race and victory was his.

The big weekend got off to a joyful start—in more ways than one—on Friday when Richard Grose took the $3,750 top payout in our $7,500 Guaranteed tournament. 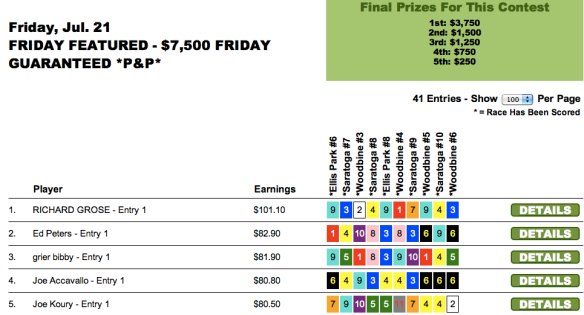 Key for Richard was Saratoga Race 10 winner #4 Joyful Joyful ($39.60, $16.20), who conjured up memories of yesteryear by bringing ugly looking steeplechase lines to the party and leaving with a longshot victory over the Saratoga grass.

Joyful Joyful was also joyous to 2015 NHC Final Tabler Mike Ferrozzo and 2007 NHC Champ Stanley Bavlish (who has made a final table as well).

They were the top two finishers in Friday’s $50 NHC qualifier, and they provided more evidence that—while small-entry-fee contests attract lots of players and a tighter leaderboard—top players with top scores can and do still get rewarded in them.

If Kirk Tesar was the star of Saturday, then Stephen McNatton was the day’s co-star.

He and Frank Perri filled the top two slots in Saturday’s NHC qualifier.

But McNatton may have performed even better in the Breeders’ Cup Betting Challenge qualifier over at HorsePlayers.

Despite blanking on the first four races and final two races…with both entries…McNatton cajoled them both into the top two by getting hot in the middle. He picked different horses in only three races and each of those trios showed flat-bet profits. So he finished not just with a full $10,000 BCBC entry, but a $2,500 partial one as well.

The Saratoga Challenge is fast approaching and…

Frank “The Cop” Sorensen, Dan Desena and Roger Cettina each won $2,750 packages by running one-two-three in Saturday’s qualifier. You can count on Frank and Roger sitting together at the Spa, cheering their (and each other’s) horses home with gusto.

G.T. Nixon rolled to a resounding victory in Saturday’s qualifier for the Monmouth NHC Super Qualifier on August 26.

Unlike the 1972 election, this Nixon landslide win was achieved without any foul play or dirty tricks.

Robert Ferguson and John Roe hope to carry the state of Indiana next month.

They each earned a pair of entries to the Indiana Grand qualifier on August 19.

There were nine featured events on Sunday with lots of different winners (27 top winners in all), but probably the most notable figure this day was a horse.

That’s Madam Dancealot who won the San Clemente Handicap in our final featured-contest race and paid $44.40 ($42.00 for contest purposes, of course) and $14.80 to place. Picking Madam Dancealot was very, very helpful to one’s Sunday success…but not essential.

Daniel Jablanski had such a big lead heading into the last race of Sunday’s $10,000 Guaranteed game that he could safely ignore the Richard Baltas-trained longshot. In fact, it didn’t really matter who he picked in the San Clemente. (San Clemente, Calif., was the location of Richard Nixon’s Western White House, by the way.)

He and Mike McIntyre were the big winners of all-inclusive packages to the September 23-24 The BIG One at Laurel Park and each will be eligible for $500,000 lump sum bonuses should they win both The BIG One and the NHC. 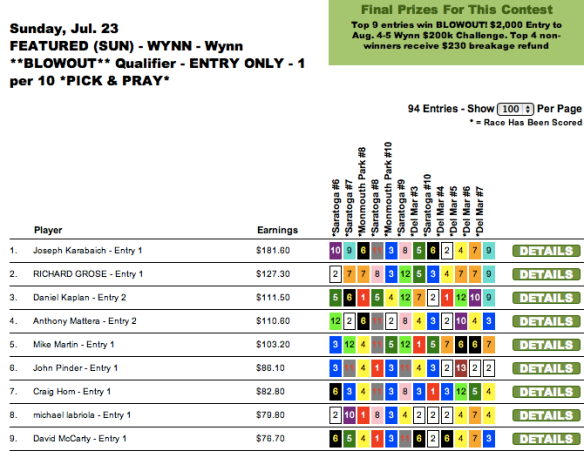 …and for four of the top seven in our Gold Coast Summer Classic Blowout.

We’re delighted to be sending 16 players to these two contests (nine to the Wynn and seven to the Gold Coast) just on the strength of Saturday’s Blowouts alone. The nine Wynn winners were Joseph Karabaich, Richard Grose, Daniel Kaplan, Anthony Mattera, Mike Martin, John Pinder, Craig Hom, Mike Labriola and David McCarty. It was a particularly nice weekend for Grose who, as noted earlier, won Friday’s $7,500 game. And what a score Joseph Karabaich turned in!

…and Peter Osella in Sunday’s Saratoga qualifier (Last Chance for this coming up this weekend):

Madam Dancealot was just one of five winners for Robert Gilbert who posted a monster score at HorsePlayers to win an NHC berth on Sunday along with 2016 NHC Tour Rookie Champ Peter Dresens (who wowed NHC players last February with his natty attire).

O’Nail collected the $1,200 on the strength of three hits. Close runner-up Garry Addley had five winning $1 exacta, but his total couldn’t quite match O’Nail’s.

We thank you for sharing your Saratoga/Del Mar opening weekend with us and we wish our HorseTourneys qualifiers good racing luck next weekend at Del Mar and the Gold Coast. Next weekend only figures to have even better racing with the always-great Haskell card joining all of the Saratoga and Del Mar excitement. Have a great week ahead!