When Belmont ended its Saturday card after three races due to wet conditions, it did a number on our Father’s Day eve featured schedule. Fortunately our weekend schedule was fairly well backloaded to help celebrate the Dads out there. And so there were still a dozen featured tourneys this past weekend—and they showcased a dozen different winners.

Peter Rogers got things rolling on Friday with a nice win–worth $3,750–in our $7,500 Guaranteed tournament. 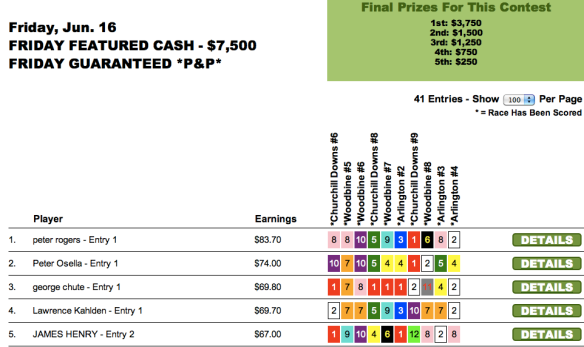 Most of Saturday’s featured tourneys fell prey to our 70% rule. By that I mean that all HorseTourneys and HorsePlayers contests require that at least 70% of the scheduled races take place for a tourney to go on as scheduled. Since Belmont races made up four of the 12 races in our featured qualifying tournaments on Saturday, that meant they had to be canceled. A bummer, for sure. But we’d rather suffer an occasional rainout than have people commit serious money to a contest and then see it decided based on a small number of races. Just as baseball requires five innings to be played before a game can be considered official, we require 70% of a contest’s scheduled races to be run. Reasonable minds could differ on the best percentage—but 70% has always worked well for us, and our players seem to think that’s fair, so that’s what we go with. 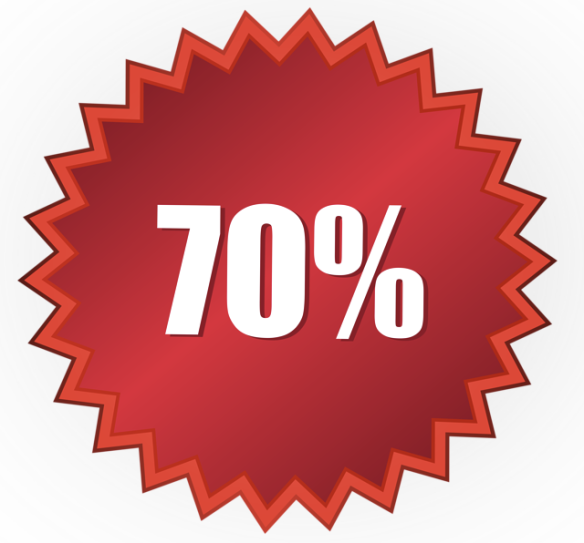 Happily, we did have one featured game on Saturday that did not succumb to the New York elements.

David Ruge, Anthony Trezza and Victor Mendes Sr. were all smart enough to select #10 Reigning Catfish ($31.80 to win, $16.20 to place) in the contest finale, the 9th at Arlington. This moved them to the head of the class and for Ruge, that meant a nice $7,000 payday in our $15,000 Guaranteed event. (Not a bad day for Trezza or Mendes either!)

So while we only had one featured tourney on both Friday and Saturday, we scheduled (and completed!) 10 on Father’s Day.

Perhaps it was fitting on the week that ESPN premiered its new 30-for-30 film “Celtics and Lakers: Best of Enemies” that our featured Sunday cash game be won by a player named Bird. Carson Bird to be precise.

The winners of our Father’s Day, two-seats-guaranteed NHC qualifier were Phil Hoedebeck and Janice Houston.

Houston earned her NHC seat by the slimmest of margins—10 cents, over Joe Pettit. And for Hoedebeck, the Father’s Day win represented his second victory this year in a HorseTourneys/HorsePlayers online NHC qualifier. Why is this particularly noteworthy? As pointed out to us by “The Captain” Les Harris, Hoedebeck’s first entry to the 2018 NHC was earned on Mother’s Day.

He finished first in the NHC-BCBC Combo qualifier at HorsePlayers. Normally that would mean an NHC seat AND a $10,000 Breeders’ Cup Betting Challenge entry. However, Watts was already double-qualified for the NHC. So that means that Watts gets the BCBC entry, and the NHC seat drops down to David Nelson–which made it a pretty memorable Father’s Day for him too!

…to earn himself a $10,000 BCBC in that day’s standalone BCBC qualifier.

Father’s Day was the first of several consecutive Sundays in 2017 when we will now be offering two seats guaranteed in our weekly qualifiers for The BIG One. 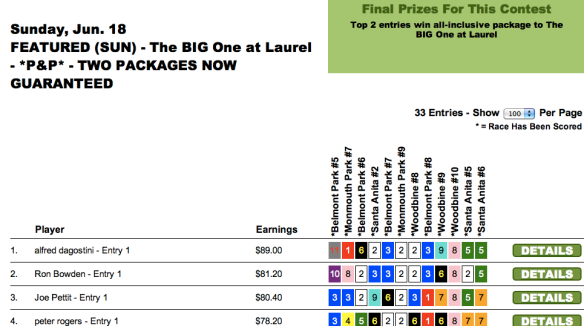 The first two winners under the revised format were Alfred D’Agostini and Ron Bowden. (This time Joe Pettit missed out by all of 80 cents.) They each will receive all-inclusive packages to the September 23-24 “high expectation” competition at Laurel Park. And should either win The BIG One, they would become eligible for a $500,000 lump sum bonus if they go on to also win the NHC.

John Doyle knows what it’s like to win the NHC.

And after Father’s Day at HorseTourneys, it can now be said that he also knows what it’s like to win a Del Mar Handicapping Challenge qualifier.

Doyle, with a $7,000 entry fully secured, will now plot his course for Del Mar, where a win would earn him, among other things, a special $10,000 HorseTourneys site credit bonus.

Another player who has left his mark on the NHC is Jonathon Kinchen. In 2015, the Austin, Texas native landed both his NHC entries into the top 10 (though only one was allowed to be active at the Final Table, per NHC rules back then).

And, like John Doyle, Kinchen also had a nice Father’s Day at HorseTourneys. 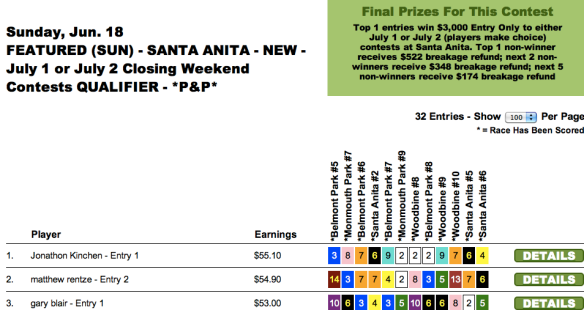 It was a tight, low-scoring battle. But as Darrell Royal used to say, it’s not how, it’s how many. And now Kinchen will have the choice of playing his $3,000 entry at Santa Anita on either July 1 or July 2 of Santa Anita’s closing weekend tournaments. Right now, the smart money is on July 1. That’s Jonathon’s birthday.

As already noted, Joe Pettit was knocking on the door of a lot of Sunday’s tourneys. He was second behind Carson Bird in the day’s $10,000 game (to complete an NBA Top 50 players last-name exacta). And he had very tough beats in our NHC and The BIG One qualifiers. But in our Surfside qualifier… 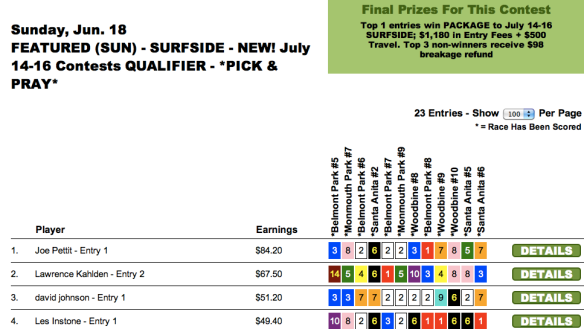 …he broke through. Joe will now move on to Surfside with his entry fees for all three days of competition covered.

Peter Osella, second in Friday’s $7,500 game and 6th in Saturday’s $15,000 event, was the winner of our Arlington Handicapping Challenge qualifier on Sunday.

And Mike Forzano hit four $1 exactas from 12 races, including a juicy one for $94.50 in the contest finale…

…to win the $600 top prize in our $1,500 Guaranteed Exacta game. Finishing fourth was Les Instone, who won back-to-back Sunday Exacta tourneys in May.

Thanks to all of you for bearing with us through a challenging Saturday and helping us have another fun weekend. We’re excited to do it all over again (minus the cancellations) next weekend. Have a great week.