Oaklawn Park track announcer Vic Stauffer is one of the most recognizable race callers in the business. For the last several years, though, Stauffer has proven his mettle at “calling” races before they are run. Those skills were on full display Saturday (and Sunday too) at HorseTourneys and HorsePlayers.

Stauffer’s biggest victory of the weekend came in Saturday’s BCBC qualifier at HorsePlayers, where he won a $10,000 entry in a hard-fought battle over Edward Enborg, Richard Wieczerzak and the unlucky Ken Jordan, who managed fourth place despite not entering picks in three of the late contest races.

Using the same picks, Stauffer also finished first in the Last Chance Monmouth Pick Your Prize qualifier on Saturday at HorseTourneys. In this qualifier, he won a package for the June 3 tournament at the Jersey Shore along with NHC II Champ Judy Wagner, Kevin Engelhard and the here-less-unlucky Ken Jordan.

Here, Stauffer could beat all but the always-dangerous Joe Koury, who ripped off four straight winners during the second half of the competition to earn the $3,000 top prize. Still, the runner-up check for $1,250 wasn’t a bad cherry atop Stauffer’s weekend sundae.

There were several other significant cash games over the weekend. 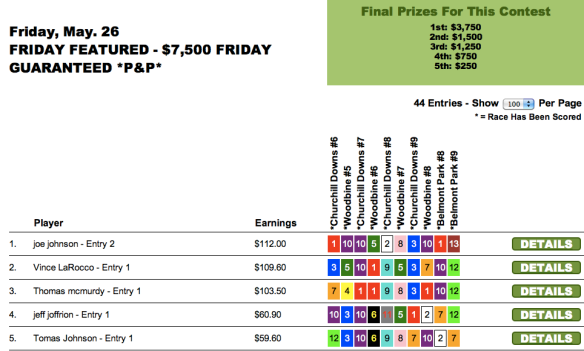 Joe Johnson picked four winners—most notably cap horse Harnac in the 9th at Churchill Downs—to get the weekend off to a fast start and earn the $3,750 top money in Friday’s $7,500 Guaranteed game.

Kimberly Moffatt sprinted out to an early lead, then saw her last four picks all fail to finish first or second. But her triple-digit score of $101.10 was plenty good to take the top cash of $7,000. Friday’s winner of the $7,500 game, Joe Johnson, checked in third to earn $1,500.

Blake Sullivan’s performance on Sunday was less flashy, but it did the trick.

There were several other notable winners on Sunday.

George Chute has made a habit lately of winning entries to big-ticket, brick-and-mortar tournaments. On May 14, he earned a $10,500 to the Belmont Stakes Handicapping Challenge. And Sunday he earned a $7,500 package to the Del Mar Handicapping Challenge. And, as a HorseTourneys qualifier, he is eligible for a $10,000 HorseTourneys site credit bonus should he finish first at Del Mar this summer.

Jeff Joffrion registered his second big win in as many weekends on Sunday. On May 19, he won HorsePlayers’s coveted NHC-BCBC double qualifier.

And this week, he won a $2,000 entry to August’s Wynn Handicapping Challenge, as did second- and third-place finishers Kevin Smith and Stephen Diaz.

Another winner on back-to-back weekends was Les Instone.

And his $600 win in Sunday’s $1,500 Guaranteed Exacta tourney was doubly notable in that it was the second straight Sunday he won this event. Tune in on Sunday to see if Les can do more!

A lot of favorites were winning on Sunday so that meant that scores were generally on the low side. This was just fine for Chris Larmey.

The NHC Players Committee Chairman’s total of $54.60 got the job done in Sunday’s Belmont Stakes Handicapping Challenge qualifier. Chris will be tripping the light fantastic in New York on Belmont Stakes Day (though I don’t think they play that song there anymore unfortunately). And you can join him if you win this weekend’s last chance Belmont Stakes qualifier.

…was easily best of 22 in Sunday’s all-inclusive qualifier to The BIG One. Only he and George Chute finished with a flat-bet profit ($48.00+) for the 12-race, $2 win-and-place tournament. Fazzolari will now be one of no more than 57 at Laurel competing for a total of 20 NHC, BCBC and Horse Player World Series seats plus a possible $500,000 The BIG One-NHC lump sum bonus.

Four NHC seats were won this weekend, and Saturday’s 2-seat qualifier at HorseTourneys had a particularly wild ending.

Winner of a $7,500 game on Kentucky Oaks Day with a total of just $47.40, Charles Myers more than doubled that score, and that $97.20 tally was barely good enough to take the top spot in a blanket finish. There was a dead heat for second at $95.50 between Scott Blair and Ken Orchard, with the second-place tiebreaker—and the all-important NHC package—going to Blair by virtue of having picked six winners to Orchard’s five.

Sunday’s 2-seat NHC qualifier at HorsePlayers was less dramatic but almost as close.

Congratulations to the now Vegas-bound Dennis Desenberg and David McCarty (by 50 cents!).

On Memorial Day there was a 1-seat-guaranteed Breeders’ Cup Betting Challenge qualifier that drew enough entries for us to award a second grand prize.

In what was yet another close weekend affair, James Henry and Robert Traynor emerged victorious—and with $10,000 BCBC entries in their pockets.

But we close this edition of the Weekend Recap with the Monday exploits of Scott Ciccantelli who, as of now, is not guaranteed to have won a blessed thing. But whose handicapping performance is nonetheless worthy of special recoginition.

It was earned in an $18 feeder for a Breeders’ Cup Betting Challenge qualifier held next Sunday, June 4, at HorsePlayers. Scott finished first in the feeder, which only used Santa Anita races. But that bare-bones summation doesn’t come close to doing him justice.

If Scott had a tip sheet, and on your way out of Santa Anita, someone handed you a marked-up version of it that boasted seven out of eight winners—all on top—you wouldn’t have believed it.

Yet, here at HorseTourneys, the level of handicapping routinely on display is so outstanding, the discovery of a performance like Scott’s is somehow just a little less shocking than it might otherwise be. And, as this example illustrates, these great performances are sometimes found in the lesser games rather than in the major ones.

And for the record, Scott’s only loser from his eight selections suffered an injury while bidding for the lead in the stretch and didn’t finish the race.

Congratulations on a great display of handicapping, Scott. And good luck on June 4.