Actually, in Steve Arrison’s case, maybe he won’t associate last weekend with HorseTourneys. And that’s only because he has done so much winning around here lately that he might have trouble keeping the weekends straight.

Kevin Willet will be joining Steve at the Wynn, of course. And fellow Monmouth package winner David Chamberlin continues his nice run of late. Last Sunday he became our first 2017 qualifier to the Belmont Stakes Handicapping Challenge.

We are very confident that David Sullivan will forever connect Derby 143 with HorseTourneys. His sharp Derby day selections in our two biggest tournaments earned him identical scores of $122.80—good for the top prizes in both our $50,000 Guaranteed event and our NHC qualifier: 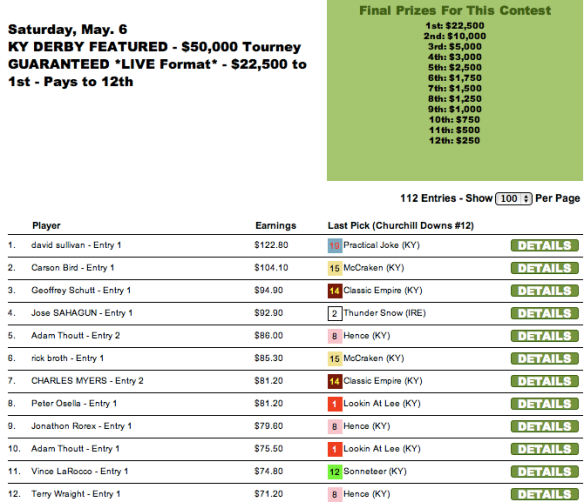 Congratulations as well to Tanya Taylor and Wayne Collier who followed close behind David in our 3-seat-guaranteed Derby Day NHC qualifier and will be joining Sullivan at Phil Ruffin’s house next February. Collier nabbed the big place price on Lookin at Lee in the Derby to punch his ticket to the NHC.

David Sullivan, meanwhile, split his Derby pick across the two contests, but his winners were all common. And as you can see from his scoresheet, he rode a terrific mid-contest 90-minute-or-so hot streak to victory in the two events: 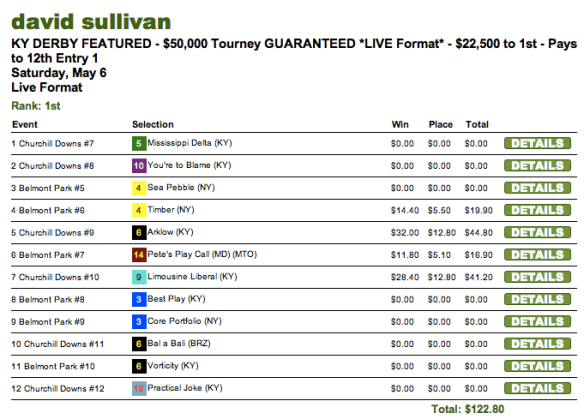 Jake Tyler and Richard Seidl will also be heading to Las Vegas—just sooner and to a different part of town.

Our other big Saturday tournament was contested over at HorsePlayers where Daniel Johnson emerged victorious after tabbing five winners and one runner up in the Breeders’ Cup Betting Challenge qualfier:

Unlike most of Saturday’s winners whose main damage was done at Churchill, Daniel had three of his five winners come at Belmont. There are many paths on the road to success!

Perhaps the headline of this blog was misleading in describing Dane Moore as having won twice. He only won one tournament, but it was a good one. 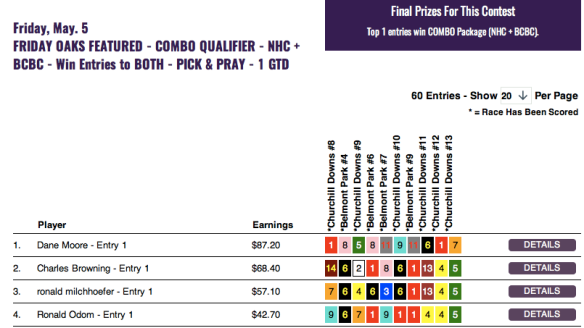 Dane’s 10-race score of $87.20 on Kentucky Oaks Friday earned him spots at both the Breeders’ Cup Betting Challenge and the NHC.

Charles Myers didn’t have nearly as good a day as Dane in picking winners on Friday, but we doubt Charles is too upset. 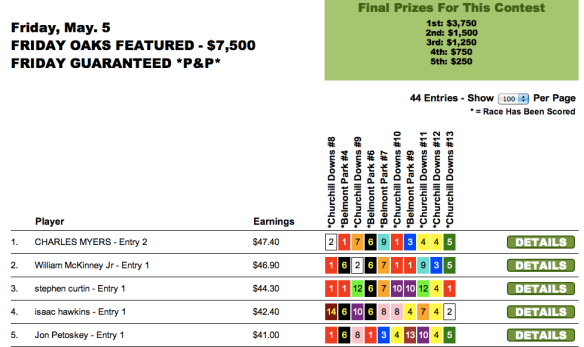 His modest score of $47.40 beat everyone else (and that’s what we pay off on!) in Friday’s $7,500 Guaranteed game. For those who think you always need to crush a game in order to win a good prize, take a look at Charles’s Friday scoresheet. 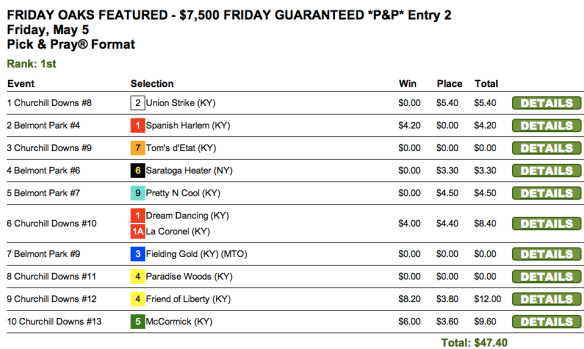 Scores were significantly higher on Sunday. Arrison’s tally of $121.70 was the gaudiest. But one would probably argue that the day’s biggest winner was Dan Flanigan. 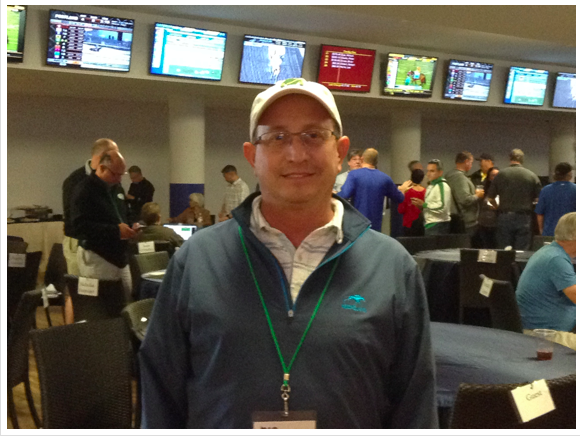 That’s a shot of Dan after winning last year’s The BIG One. Accredited The BIG One photographers may be able to save film this year (assuming Dan is kind enough to wear the same clothes).

Dan’s selection of Heldatgunpoint ($31.20, $10.00) in Belmont’s 9th race—the next to last race of the contest—propelled him to the top spot and secured him the right to defend his title at The BIG One and to compete for this year’s $500,000 The BIG One-NHC bonus.

But wait, Heldatgunpoint did more than that for Dan.

Though Dan didn’t play identical tickets, Heldatgunpoint was also central to his winning Sunday’s NHC qualifier over at HorsePlayers. John Strichek was second and has also now gotten himself qualified to the big dance next February.

John Gamane posted a very strong Sunday score of $111.40 and, as a result…

…he’ll be spending Preakness weekend in Las Vegas at the Treasure Island Wager to Win tournaments. Your last chance to qualify for these 100%-payback events comes next weekend here at HorseTourneys.

Derby weekend was rounded out, of course, by our $1,500 Guaranteed Exacta box game. Last week’s winner, Sean O’Malley, had another strong showing…

…but this time, it was John Heiney who claimed the $600 top prize. John hit $1 exactas on the first two contest races, then added a third later that sealed his victory.

Last but not least, congratulations to Kevin McFarland, who won $282,325 plus an NHC seat and a BCBC entry at the Kentucky Derby Betting Championship. Full standings are available within Sunday’s blog entry.

In the meantime, thank you for sharing a portion of your Derby weekend with us!