Taking an aggressive, multi-table approach even though it was a live-format weekend, Lacy signed up for two entries in each of six different featured tourneys—and entered the same two sets of picks in all six contests. One of his entries accumulated only about $30…no good. But his other garnered a very solid $84.20. 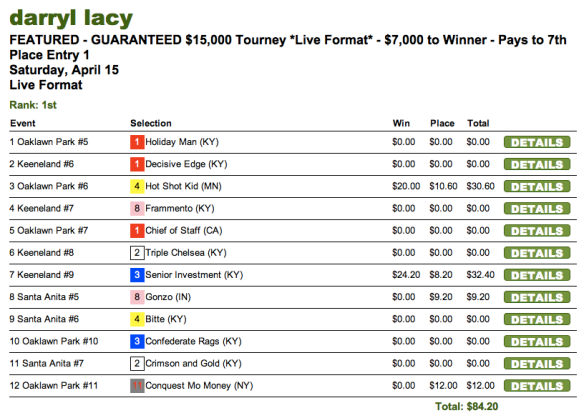 And that was good enough to win three of the six tourneys:

It also got him a valuable runner-up finish behind Ali T. Aksoy in another.

What about the tourneys that Lacy failed to win on Saturday?

Darryl was close-but-no-cigar in the 2-seat-guaranteed Breeders’ Cup Betting Challenge qualifier at HorsePlayers that was won by Craig Amundson and Robert Buck.

And $84.20 didn’t quite get it done compared to the scores put up by Rick Vasquez, Norma Mendoza and Ron Tackett in our 3-seat NHC qualifier.

And fortunately for Frank Fosbre…

…Darryl Lacy opted not to play in Saturday’s Monmouth Pick Your Prize qualifier where $84.20 would have led the field.

Easter Sunday was a quieter-than-normal day in racing with so many tracks closed. But it was a busy day at HorseTourneys, with seven featured tourneys and plenty of players eager to participate.

In our $10,000 Guaranteed game, Juan Benedetti needed to hit something big in the final contest race (Santa Anita Race 7) if he was going to take home the $5,000 top prize. Unfortunately, his horse ran second.

But that was okay! Because his pick, Majestic Diva, was a bomb that paid $31.20 to place (better known as $22.00 in HorseTourneys land!) and that was enough to get him the big money over Jason Duncan, who also played a great tournament.

For the second straight week, 2015 BCBC champion Tommy “The Hammer” Massis won a seat to the April 23 Keeneland Grade One Gamble. (A result likely to bring joy to the Keeneland Director of Mutuels.)

Last week, he did so by finishing second to Eric Moomey. On Sunday, he did that performance one better by winning our last-chance Grade One Gamble qualifier over Shea Harrod, who also earned a $3,000 entry plus $500 travel. We wish them both the best of luck next Sunday at Keeneland.

Meanwhile, Evan Barshack became the latest qualifier to the 2017 The BIG One, edging out 2016 NHC Tour champion Cheryl McIntyre.

And that means, of course, that Evan is now eligible (along with the other BIG One contestants) for the $500,000 lump sum bonus payable to The BIG One winner if he or she goes on to win the NHC. Your next chance to qualify: Next Sunday.

Speaking of bonuses, Roger Ball made himself eligible for a nice one Sunday.

If Roger goes on to finish first at the Del Mar Handicapping Challenge in July, he will win a $10,000 HorseTourneys site credit bonus, payable over six months. That’s a very nice cherry on top of what would be a great payday out at Del Mar.

The always dangerous James Henry was just that on Sunday.

Robert Gilbert, on the other hand, will be spending his Preakness weekend on the Las Vegas strip…

…thanks to a strong performance in our Treasure Island Wager to Win qualifier.

And over at HorsePlayers on Sunday, William Holmes and Joseph Cicatello were the winners of NHC seats in our 2-seat qualifier.

Like Juan Benedetti in our $10,000 Guaranteed cash game, Holmes will be thanking Majestic Diva for getting him where he wanted to be (in this case, the NHC!)

In the days ahead, keep an eye out for Belmont Stakes Handicapping Challenge and Gold Coast Summer Classic feeders and qualifiers.

Meanwhile, thanks to all of you for playing last weekend. We were happy to be able to help fill the action void a little bit for you on Sunday, and we truly appreciated your business.