Our featured tourneys awarded 39 seats to important on-site competitions and $46,000 in cash last weekend. Much of that was offered on Sunday when we hosted 10 featured events, including no fewer than eight qualifiers. With such a full schedule, it presented an opportunity for someone with good opinions to have a truly memorable day. On Sunday, that someone was William Roth.

Using one set of unaltered picks during a live-format weekend, Roth entered seven Sunday tourneys and won six of the seven (our $10,000 Guaranteed game, plus qualifiers for the The BIG One, Del Mar, the Keeneland Grade I Gamble, the Wynn Handicapping Challenge and the Monmouth Pick Your Prize competition. In the one contest he failed to win, Roth was edged by Michael Marlaire in Sunday’s 3-seat NHC qualifier, but he still finished second which was plenty good enough to win an NHC seat—along with Brent Johnson (owner of 2004 Breeders’ Cup Turf winner Better Talk Now).

For the day, Roth invested entry fees of $1,524 and earned $5,000 cash plus entries and packages to live events worth approximately $35,150. It will certainly be interesting to see what Roth can parlay that into as the year progresses.

It’s not as though Roth put up an unbeatable score in those seven tourneys, however.

Check back tomorrow when the HorseTourneys blog will visit with Roth to learn more about his incredible day.

If Roth was Sunday’s gold medalist, then the silver goes to Michael Marlaire.

Not only was he the only one to defeat Roth all day long (in the NHC qualifier), he registered a second victory of the day in our first qualifier for the April 7-9 Surfside tournaments. So Marlaire and Roth, therefore, combined to win eight of our 10 featured tourneys on Sunday.

One of the ones they didn’t win was Sunday’s Horse Player World Series Entry Only game.

Roth and Marlaire also passed on our $1,500 Exacta game.

That left things to Ronald Richardson, whose dominating score of $281.80 came largely on the strength of the Valedictorian-Antoaneta $1 exacta payoff of
$249.80 in Gulfstream’s 11th race. Ronald wins $600 for the first-place performance.

There were also some happy runners up to Roth in several of Sunday’s events. Special kudos to former NHC champ (and 2017 NHC runnerup) Steve Wolfson, Jr. who won a package along with Roth to the Keeneland Grade I Gamble; to Pete Acocella, who will join Roth at Monmouth for the Pick Your Prize tournament; and to Brent Johnson who augmented his winning of an NHC seat with a nice second-place finish to Roth in the $10,000 game—good for $2,500 in cash.

Back on St. Paddy’s Day, the luck of the Irish was with Richard Grove. 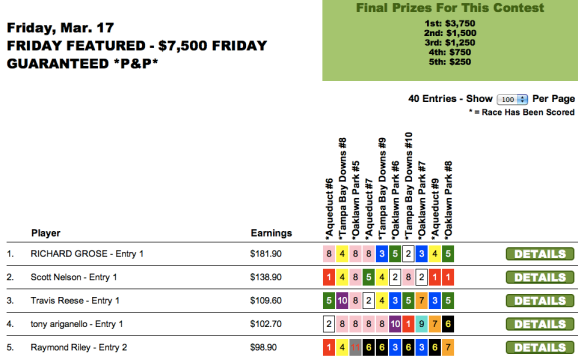 He got the weekend off to a nice start by winning—in very convincing fashion—the $3,750 top prize in our Friday $7,500 Guaranteed game over Scott Nelson.

And Saturday was a big day in its own right. Tom Dillon ($121.20) topped a parade of 20 (!) winners of HPWS entries in what was a very popular HPWS Blowout event. 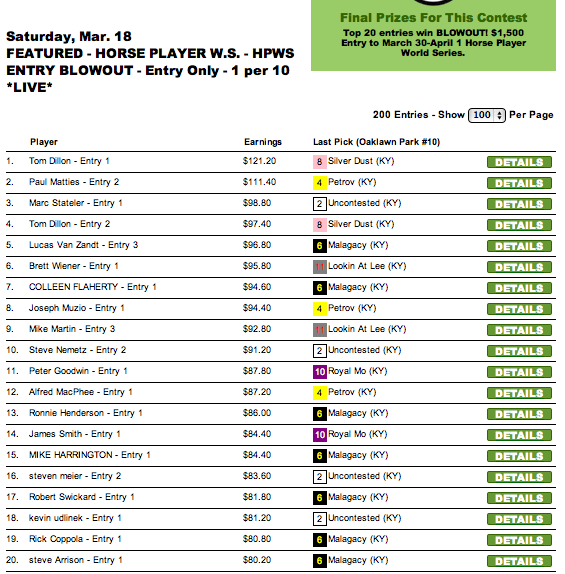 Note that you have one more chance to win an HPWS entry here at HorseTourneys this Saturday, March 25.

Honorable mention goes to Chris Fallica, who finished just out of the NHC-winning range for the second time in the last three weeks.

Last but certainly not least, we hosted a $25,000 Guaranteed cash game on Saturday. The first-place prize of $12,500 was won by Richard Funaro, who finished comfortably ahead of Anthony Kite. But that bare-bones description doesn’t do Funaro justice. Check out his scoresheet:

Eight winners (and one place horse) from 12 races, and more than $50 above anyone else’s score in Saturday’s featured tournaments! If tourneys were home runs, this one would be a Giancarlo Stanton tape-measure shot. We expect to see Funaro swinging a big bat in this Saturday’s $50,000 game.

Thanks to all of you for your role in making such a lucrative weekend possible. And, again, check back on Tuesday for our profile of William Roth.