It has become almost commonplace during a Pick & Pray weekend to see a player win multiple tournaments or prizes on a single day by entering a set of selections in more than one competition.

With this past weekend offering almost exclusively live-format tourneys, however, multiple wins by one player seemed to us like a far less likely proposition.

No fewer than four players scored two wins over the weekend. And two of them—Douglas Draper and Phil Lam—recorded one win each day, even though Saturday’s featured schedule involved multiple cap horses and Sunday’s was dominated by more moderately-priced winners.

On Saturday, Draper posted a solid victory in our Wynn Handicapping Challenge qualifier to secure a $2,000 entry.

On Sunday, he made Saturday’s win almost look like small potatoes by registering a W in our newly-guaranteed Del Mar qualifier.

Lam didn’t finish first in Saturday’s 47-entry Monmouth Pick Your Prize qualifier—that distinction went to Peter Rogers. Normally, Lam would have earned just some breakage. But based on a last-minute HorseTourneys decision to award an additional prize package even though the rules called for one winner per 25 entries, Lam’s second-place finish wound up being just as good as a win.

Bonusing an extra prize package in a given tourney is not something we do lightly. In fact, it draws dirty looks from our accountant when we do so. But it’s a way for us to say “thank you” to you for your strong support thus far in 2017. And sometimes we think doing something we don’t have to do is good business in the long run—even if our numbers crunchers don’t always agree.

On Sunday, Lam needed no such kindness from the stewards to earn his second win of the weekend.

His Sunday win in our qualifier for The BIG One was in full compliance with our pre-tourney parameters. We like to think that perhaps our decision on Saturday put Lam in a great frame of mind for Sunday. Regardless, he will now be at Laurel in late September as part of an all-inclusive weekend with plenty of cash, BCBC spots and NHC spots up for grabs among a field that is expected to number no more than 57.

Three weeks ago, it was Steve Arrison who qualified for The BIG One. This weekend, Arrison knocked down two more targets.

He finished first in our Horse Player World Series entry-only qualifier on Sunday to win a $1,500 entry along with Josh Thorpe, Robert Barbaro, Patrick Larson and James Snapp.

And Arrison used the same picks to place first in our Keeneland Grade One Gamble qualifier. Note that here again, we added a second prize package in a “1 per 25” tourney despite not reaching 50 entries. (More dirty looks from our Finance Dept.) This time it was Brian Johnson who got “moved up” by the HorseTourneys stewards. We’re confident that Brian and Steve will give us terrific representation in Lexington.

I mentioned earlier that, unlike Saturday, Sunday did not feature gigantic prices. When this happens, George Chute is often double-tough (as D. Wayne Lukas is sometimes fond of saying) and Sunday was no exception.

And he and Pete Acocella were our two last-chance winners of a package to this coming weekend’s The Stronach Group Ultimate Betting Challenge. (Unlike Arrison, Chute used different picks in his two winning entries.) George and Pete have the option of playing from either Santa Anita or Gulfstream this weekend. That’s what I call a question with no wrong answer.

It should absolutely be noted that this is the second consecutive weekend in which Chute has won a pair of tourneys. Last weekend he accounted for the Friday $6,500 Guaranteed game, and he also finished first in the Feb. 26 Horse Player World Series entry-only qualifier. Do not touch George Chute right now…the man is sizzling.

There were plenty of other noteworthy performances turned in over Fountain of Youth weekend. 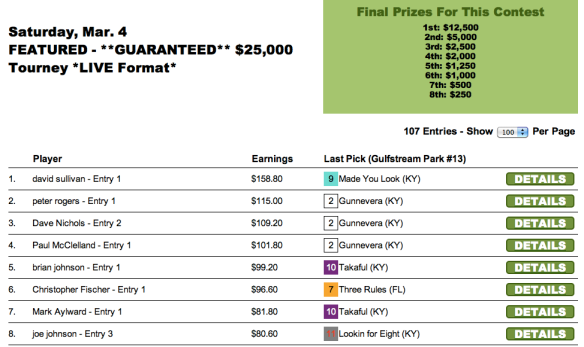 David Sullivan put up a massive score of $158.80 to win $12,500 in Saturday’s $25,000 Guaranteed tourney. Monmouth winner Peter Rogers checked in second, good for $5,000. Sullivan nailed both of the Santa Anita cap horses plus a 9-1 Santa Anita winner for good measure to secure his first-place finish.

Four skillful players punched their tickets to the NHC next January: John Kosciak, Brian Troop, Robert Masterton and Kenneth Dobiecki. For Troop, it will be an opportunity to make history as the first two-time winner of the NHC. He won the event in 2010 at Red Rock, but was not in the field in 2017 when fellow Canadian Ray Arsenault stormed to victory.

Again, we wish George Chute, Pete Acocella and all of our HorseTourneys qualifiers the best of luck this weekend at The Stronach Group Ultimate Betting Challenge.

And we have another robust weekend coming up, including that new $10,000 game plus qualifiers to the NHC, The BIG One, the Kentucky Derby Betting Championship, the Keeneland Grade One Gamble and Wynn all on Sunday. Plus we’ll be running feeders all week long to our March 18 Horse Player World Series Blowout event.

Thanks to all for playing, and may you have a great week ahead.