Presidents Day weekend features a real flurry of activity here at HorseTourneys. Our featured tourneys alone offered a total of $71,500 in cash and 27 seats to important brick-and-mortar tournaments throughout the United States.

Our $6,500 Guaranteed tourney on Friday was something of an appetizer for the weekend ahead. 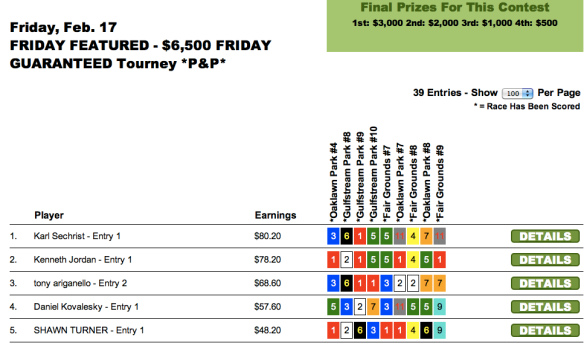 For Karl Sechrist, that appetizer was probably even better than the main course. He picked four winners (including one paying $33.40) from nine races to earn the $3,000 top prize. It took every bit of those four winners for Sechrist to beat Ken Jordan, who was just $2.00 behind in second place. But shed no tears for Jordan. 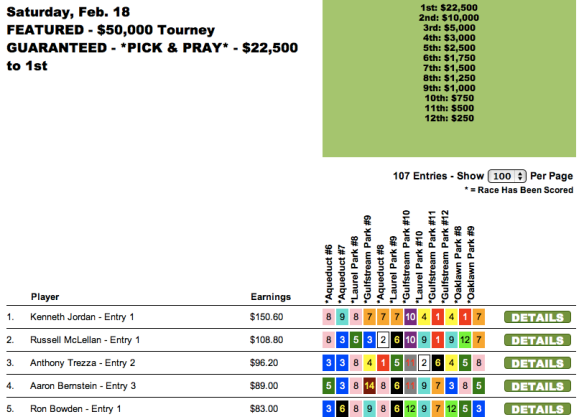 Picking right up where he left off on Friday, Jordan made a mockery of our $50,000 Guaranteed event on Saturday, putting up a giant score of $150.60 and finishing more than $40 ahead of his nearest pursuers, Russell McLellan and Anthony Trezza.

Joe Pettit was the winner of our Wynn Handicapping Challenge qualifier over Rick Broth, earning Joe a nice $2,000 entry there. But, of course, we were just getting started.

Walt Nelson, Tim Herboth, Douglas Latter and Brian Gross each won full packages to next month’s Horse Player World Series. They will receive $1,500 entries, four nights at The Orleans and $500 for travel. And Mike Yurczyk emerged victorious in our Keeneland $400 Spring Challenge event.

Sunday was a wonderfully crazy day with a 12-race featured slate that yielded four horses paying more than $40 to win, another paying more than $20 and no post time favorites winning. You didn’t need to have all the “cappers” but it was a good idea to have a couple of them.

Our marquee tourney of the day on Sunday was our four-seat NHC qualifier, won by Sean Nolan with the highly impressive of $198.50 (more than four times his starting stake).

And fortunately for Nolan, he also played those same picks in our Horse Player World Series entry-only qualifier, winning that one as well. Also winning HPWS seats on Sunday were Mike Harrington, Colleen Flaherty and NHC Champion Ray Arsenault. In fact, Ray was in the odd position on Sunday of having picked two winning capper horses early in the tourney (jumping out to a very big lead), then falling completely out of the four prize winning positions as some more big prices came in, and that making a big, late charge to pull himself back up into the top four.

However Ray’s Sunday was probably tame in comparison to that of Peter Dresens, the sartorially resplendent 2016 NHC Cyber Rookie champ.

Tony Brice, John Caraher and Dresens were the three players who won 2018 NHC seats along with Sean Nolan on Sunday. But Dresens did it in particularly unique fashion: 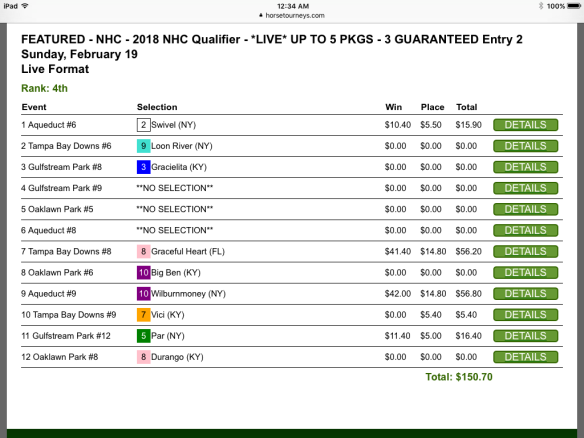 There is nothing wrong with your television set. Dresens generated his $150.70 fourth-place score despite failing to enter a selection for three of the 12 tourney races. He was more than $100 behind halfway through the contest and could perhaps have been forgiven had he just given up at that point. Instead, he went on a second-half tear that got him where he wanted to be—back to the NHC. And that’s good news for the haberdashers in greater Las Vegas.

Sunday’s Keeneland Grade One Gamble qualifier was good news for its three winners—Chris Larmey, Mark McGuire and Jim Klein. Meanwhile, Clocker John Nichols and Nathaniel Gines saw their horses report home right on time in our qualifier for The Stronach Group Ultimate Betting Championship next month. Nichols and Gines will now have the tough choice of whether to spend their March 11-12 weekend competing for big money and prizes in South Florida or Southern California.

…at Laurel Park, because he is the latest qualifier of an all-inclusive package to The BIG One where lots of seats and cash will be shared amongst a small and very select field. It was a wonderful finishing touch to the weekend for Trezza who had won $5,000 while finishing third on Saturday in our $50,000 Guaranteed event.

On the Sunday cash-game front, Mark McClyment was the big winner in our $8,500 Guaranteed event.

And it was impressive to see Sean O’Malley win the $600 top prize in our $1,500 Guaranteed Exacta Box game. O’Malley is always a player to be reckoned with in our Exacta games. On Sunday, he also played a variety of $2.00 win/place tourneys and was in contention for virtually all of them, before falling just a little bit short (e.g. 3rd in The BIG One, 5th in $8,500 game). I’m not sure whether Sean was happy or disappointed at the end of the day, but his outstanding day of handicapping did not go unnoticed.

Presidents Day afforded us the opportunity to offer a third day of lucrative tourneys during the weekend. There were many winners but the day’s top player was Brisnet’s Ed DeRosa.

A familiar face to many on the tournament circuit (and a prolific tweeter), DeRosa has gotten more and more into tournament play in recent years and on Monday, he celebrated his first significant victory, taking down the $3,000 top spot in our $5,000 game. But he didn’t stop there.

He used those same strong selections in our Horse Player World Series qualifier to win himself a seat at The Orleans as well—along with Mike Ferrozzo, David Sferra and Steve Nemetz. So those of you who will be hitting Ed up for free Brisnet PPs at the HPWS better do so early in the day, before Ed shuts his door and starts crafting his patented A/B/C grids for all nine contest tracks. If in doubt, you may be able to locate Ed downstairs at Friday’s—one of his favorite eateries while on the road.

Blaise Guadagno and Allen Sadler were our lucky winners of $2,000 entries and $500 in travel. They will compete for up to $56,000 in cash, 13 NHC seats and four BCBC seats (based on last year’s participation levels) at Monmouth, with the top winners choosing their prizes based on where they finished in the standings. Condolences to Les Harris, who had runner up Petrov in the Southwest Stakes (the tourney finale). Petrov’s place mutual was 30 cents less than what Harris needed to sneak past Sadler into second place.

Last but not least, Brian O’Keefe and Michael Odorisio were the two winners in our first qualifier for the 2017 Hawthorne Spring NHC Challenge. They each receive their $400 bankrolls for each day at Hawthorne where a total of four NHC seats, and two BCBC entries will be up for grabs in two separate one-day tourneys.

One of the added benefits of a three-day weekend is that it means there are only four days until the next weekend arrives. And when it does, we’ll be ready—with more fun cash games, more qualfiers to the NHC, The BIG One, the HPWS, Keeneland, et al. Plus we’ll add in a Kentucky Derby Betting Championship qualifier next weekend for good measure. Congratulations to this weekend’s winners—and thanks to all for playing.