I can’t say enough about Ray Arsenault’s performance. (His $407.70 final total was an NHC record.) When the final table participants were determined, the standings were very tight, with one exception—Ray Arsenault had a nice $30 or so lead on his nearest pursuer.

That’s what made his final table run so remarkable. Rather than play it safe and look to humbly chip up, the longtime HorseTourneys player kept firing away on 10-1 and 12-1 shots, and they just kept winning or running second. It had to be a bit frustrating for Steve Wolfson Jr., who was in the process of a strong final table run that, any other year, might have made him the first-ever two-time NHC Champ. 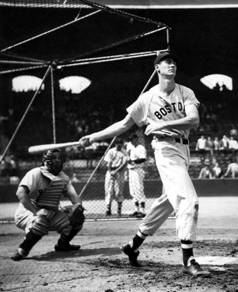 The whole thing reminded me of Ted Williams on the last day of the season in 1941. He had a .400 average entering a season-ending doubleheader against the Philadelphia Athletics. But rather than play it safe and take the last two games off to preserve his average, Williams played both games and went 6-for-8 to finish at .406. (I guess you could say it turned out that Ray beat Ted by one—407 to 406.)

Here’s Ray, who was kind enough to stop for this photo at the conclusion of Day 2. 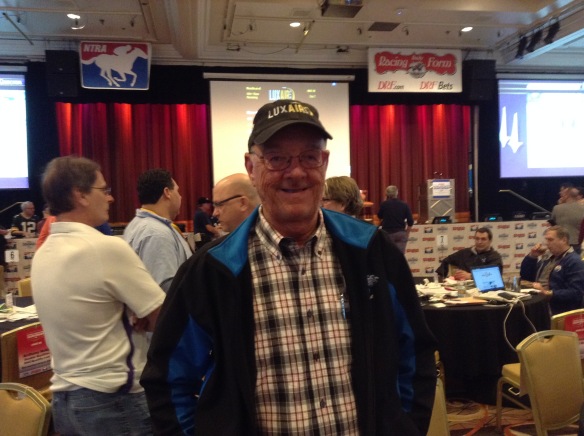 All tournament long, he was wearing a LuxAir cap given him by Kenny McMahan. Ray considered the cap lucky, and given subsequent events, that might be an understatement. It was pure coincidence that when the picture was taken, Ray just happened to be standing exactly in front of the NHC’s LuxAir Leaderboard. From the afternoon of Day 2 forward, Ray’s name never left the top of that leaderboard.

Also of great note, I thought, was the big Day 3 effort of Ryan Scharnowske, one of the many NHC participants who qualified via HorseTourneys. The Indiana native began the day in 65th place—just two places away from what would have been a morning spent in the consolation tournament. Then he went on a tear, squeaking his way into the final table, then quickly working all the way up to 2nd place, before dropping slightly back to 3rd, behind only Arsenault and Wolfson. If nothing else, Ryan’s performance seemed to be a pretty sound endorsement of the tournament format—particularly the notion that, as long as you make it to the final day, you can still finish on top no matter where you start from.

On a more HorseTourneys-centric note, it was truly delightful to meet (and spend a bit of time with) as many loyal HorseTourneys players as I did. And I know my colleague, Harry Furlong, shares those sentiments. Several of you also had very thoughtful suggestions for the Website—suggestions that we’ve already begun to discuss internally.

We were also delighted by the response to our first-ever NHC Kickoff Challenge, held on Saturday in lock-step with the mandatory races. We were giving away five NHC spots and were hoping for 600 entries. Instead we got more than 800, thereby giving us the happy duty of awarding a sixth NHC seat.

You can look forward to significantly more NHC qualifiers on HorseTourneys in 2017. Our next one is on Feb. 12 (a week from Sunday) when we’ll be offering three seats guaranteed and as many as six. Feeders are available now.

On a Vegas note, I’ve never experienced nicer daytime weather than at this NHC…and never heard less buzz about the upcoming Super Bowl. I don’t know why that was. Perhaps it would have been different had Pittsburgh, Green Bay or Dallas made it to the big game. New England seems to have become the team America loves to hate…and I’m not sure what America makes of the Falcons. I do think Atlanta is a serious team that has gotten better as the year has progressed. I’m not sure the same can be said of the Gronkowski-less Patriots, and I can’t get their struggle three weeks ago against Houston out of my head. My pick: Atlanta 34, New England 17.

Enjoy the Super Bowl. From here on out, I stick to horse racing. Promise.