The highlight of the tournament year – the National Handicapping Championship — is less than three weeks away. Since so many of you will be taking part, I thought you might enjoy a peek behind the scenes at how mandatory races are selected there. 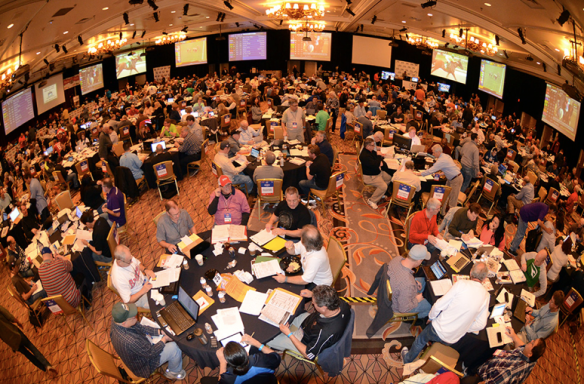 For the last dozen or so years, I have been a member of the NHC Mandatory Race selection committee. This dates back to when I was an NTRA employee, and when I left the NTRA to go to NYRA in 2013, the NTRA was nice enough to ask me to stay on in that capacity, as well as that of NHC emcee.

There are four people on the committee, including Jim Mulvihill of the NTRA and Tony Nevill, the director of race and sports book operations at the host venue, Treasure Island. This year, the group will include Tim Schram, who does such a terrific job running the Breeders’ Cup Betting Challenge.

Our task is to pick eight mandatory races for Days 1 and 2 and seven (all of the final table races) for Day 3. In a perfect world, during the first two days, we would pick eight full-field races, each run 30-40 minutes apart, with one race coming from each of the eight contest tracks, and those eight races each day, when put together, would seem a veritable microcosm of American racing – some dirt, some turf, some long, some short, some claimers, some allowances and some stakes.

Unfortunately, we do not live in a perfect world.

Eight wonderful, evenly-time-spaced races never jump off the page. Coming up with the final eight becomes a balancing act full of compromises, depending on how much (or little) there is to pick from. Race A might be great, but its post time is too close to Race B, which we like even better. So instead we could choose Race C, but we’ve already picked three claiming dirt sprints on the day and two other races from that particular track, so instead we’ll go with Race D, which is almost as good as the others but fits timewise and will give us a type of race (say, two-turns on the dirt) that haven’t seen elsewhere. This type of thing happens at virtually every race selection meeting.

What would be a perfect race? A big field at a decent enough class level (e.g. not cheap maiden claimers) without an overabundance of first-time starters and in which most of the entrants could be said to have a decent chance of winning. Twelve horse fields are nice, but if there are five first time starters and five other no-hopers, the race starts to look a lot less attractive. We do not feel that the mere existence of a 30-1 shot or two is reason enough to make something a mandatory. We prefer that a race have more than that to recommend it. Sometimes you handicap a race and say “Wow, what a great betting race.” Other times you study a race and say “Wow, this is a guessing game” or “Gee, big field but not particularly competitive.” I remember when Ginger Punch ran in a Sunshine Millions race in a big field during the NHC. She won at 1-5, as I recall. Some players had thought we should have used the race because there were lots of big prices to be had in the field. We’d rather stay away from the guessing games and the less competitive races if we can, though. At least I would. Field size correlates strongly with good betting races. But it doesn’t always guarantee it.

Often times, what we lack on Day 1 in terms of race type or location variety can be made up for on Day 2, so that when you look at the TWO days as a whole, it is something of a microcosm.

Of course, sometimes a track may not offer large enough fields to warrant ANY race over the two days being a mandatory. (This is most likely to happen at Golden Gate.) We have full freedom to not include a track when this is the case. As we often remind ourselves when we make a difficult choice, players still have the option to play any race (or track) they wish via their optional plays.

On the other side of the coin, there will be days when six races at a given track could serve as worthy mandatory events. But this is a national contest and we don’t want to give an inherent advantage to those who might specialize in, say, Gulfstream or Oaklawn. So we try not to use more than three from any one track on any given day. And if we do happen to use three from one track on Day 1, we certainly prefer not to use that many from that track on Day 2.

The meetings, themselves, are typically held two days prior to race day. They can last anywhere from 45 minutes to two hours, depending on how easily the pieces of the puzzle fit together.

It is incumbent upon all committee members to have studied each race from all eight contest tracks prior to the meeting. No slacking allowed. We typically do not have access to morning line odds by the time the meeting takes place (not that that really matters), but we do have the post times and pay very close attention to those. For the sake of operational logistics, we definitely try to avoid having two mandatory races within too short a time span. Doing so would invite problems like logjams at the teller windows or people simply forgetting to put plays in due to information overload. For a similar reason, we prefer not to schedule a mandatory too early in the day (i.e. at, say 9:45 am local time).

Yes, this is a big-money contest for adults. And adults should be responsible for showing up on time, managing their entry or entries properly, etc., etc. etc. But with 400 or so people participating, you just know that things are going to go wrong with some of them at some point, so there just isn’t much reason to tempt fate and create situations where this is even more likely to occur. Like forcing people on vacation in Las Vegas to get up early. All else being equal, we prefer that the players are happy and enjoy themselves. Let them be frustrated over their tough beats, not over our scheduling.

Next week, in Part II, I’ll go over the two primary obstacles in picking good mandatory races, and discuss what happens when committee members (vehemently) disagree.