I’ve seen players enter the same set of picks in two different tourneys and win both contests, but I’m not sure I’ve ever seen what Bill Shurman did last Friday.

And he used those same picks to take first place in our Treasure Island NHC Last Chance qualifier. But check out the final leaderboard in that event. 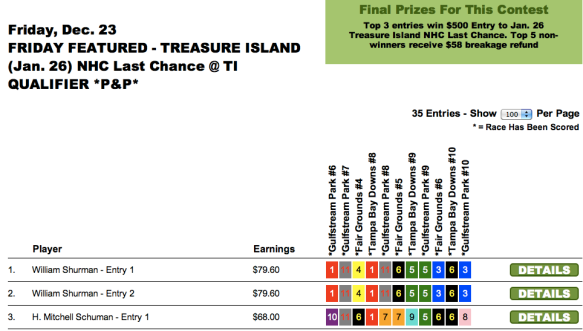 Yep. Shurman entered the same picks twice in one Pick & Pray tournament and finished in a tie for first with – himself. And that meant that he won a pair of entries to the NHC Last Chance Tournament at Treasure Island. (Safe to say he won’t be playing the exact same picks on both tickets there as NHC rules prohibit one player from winning two NHC seats in one event!)

Ironically, the other winner of a TI Last Chance entry was Mitch Schuman, who annually sits at the same table with Bill Shurman and Co. at the NHC. So it is likely that they will be sitting together at the Last Chance Tourney as well.

Scores were generally on the low side last Friday and that meant that $61.40 got it done for Terence Cook in our Horse Player World Series Entry-Only Pick & Pray. He strung together four winners and three place horses from 11 contest races to earn the win. 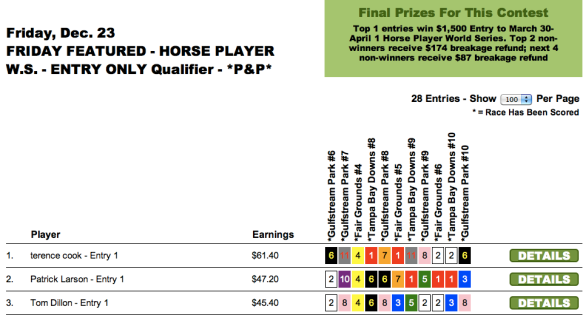 Thanks to all who put horses before holidays and joined us on December 24 to play one or more of our 29 Laurel-only tourneys on Saturday. Despite a sloppy track at Laurel, the events were very well supported, and I suppose we could have a similar day again next year with Christmas Eve falling on a Sunday – provided that Laurel is again the only track to run that day.

Laurel failed to draw a card for December 25, so that meant our next big day of action was Monday, the 26th.

Ed Peters was the day’s big winner, accounting for the $6,250 top spot in our $12,500 Guaranteed Pick & Pray in a hard-fought battle against Jobby Blevins.

It’s an understatement to say that Sunday’s Race 8 at Fair Grounds was the key race in our $1,500 Guaranteed Exacta game.

Wayne Atwell’s $1, three-horse box in that Race 8 came back at $296.40 with an 8-1 shot and a 33-1 shot filling the top two slots. All his competition could do at that point was pretty much raise white flags.

Gary Tarnopol has certainly been going well of late.

A couple of weeks ago, he won our $1,500 Exacta tourney and Monday he finished on top of the heap in our Horse Player World Series Full-Package qualifier. Joining Gary at The Orleans with full packages will be Steven Meier and Fred Meseke.

Finally, congratulations to the latest nine players to win entries to the Treasure Island Last Chance tournament. Monday’s winners were Tim Downs, Scott Fitzgerald, James Casey, William Roth, Michael Labriola, Howard Demar, Don Allen, Daniel Kovalesky and Mark Richards. We’ll be running more of these direct qualifiers on Friday and Sunday. At this rate, it will almost be an upset if the Last Chance winners on January 26 don’t all come from HorseTourneys!

Thanks to all who played over the holiday weekend, and keep an eye out for our $2,500 Guaranteed tourney on Wednesday afternoon…and especially our big $50,000 Guaranteed game on Saturday, New Year’s Eve. Good luck!