It was an exciting holiday weekend at HorseTourneys that culminated with our final NHC qualifier of 2016 – a blockbuster 500-entry, seven-seat tourney.

But Saturday was big too. 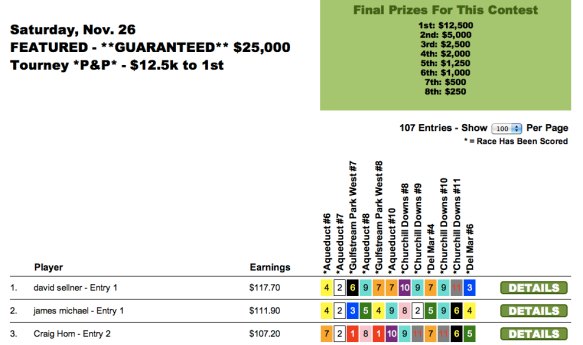 We had a special $25,000 Guaranteed tourney that was captured by David Sellner, who measured out winners throughout the competition. He prevailed over James Michael to take the $12,500 first place prize.

George Chute and Adam Crickman were the winners in what is fast becoming one of our Saturday staples – the Horse Player World Series full-package qualifier offering a four-night stay at The Orleans and $500 cash in addition to the $1,500 entry fee. 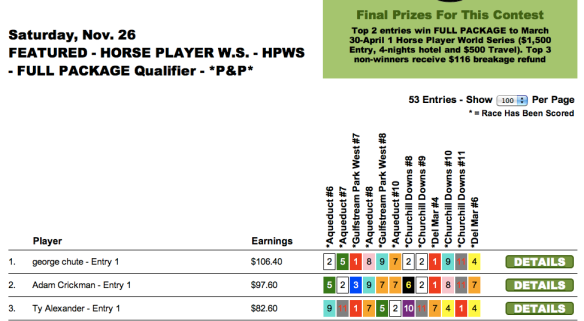 There are some who say that to win a tournament of more than a handful of participants, you have to stab at bombs. We know this is a wrong-headed sentiment, but Chute really disproved it here. Take a look at his scorecard. 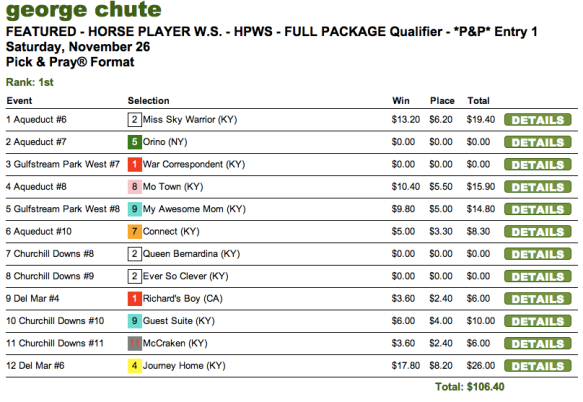 Sunday was essentially the conclusion to what had been a disappointing previous weekend when our featured tourneys had to be scotched due to wind-related cancellations at Aqueduct and Woodbine. We round up rolling our aborted 2-seat-guaranteed NHC qualifier on 11/20 into 11/27 (the latest date we are allowed to offer NHC qualifiers) and turned our 11/27 event into a five-seat-guaranteed affair. Happily, we wound up attracting an even 500 entries and, as a result, we were able to throw two more NHC berths into the kitty for a total of seven. 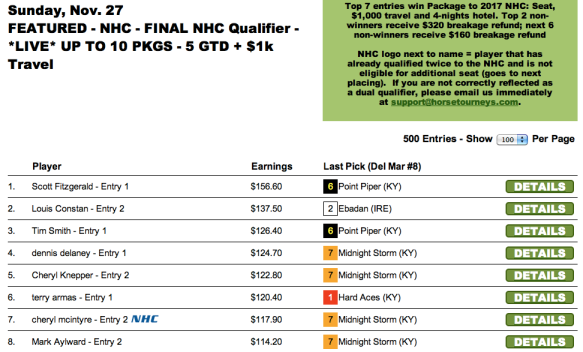 Our top seven finishers were Scott Fitzgerald, Louis Constan, Tim Smith, Dennis Delaney, Cheryl Knepper, Terry Armas and Cheryl McIntyre. However, the redoubtable McIntyre was already dual-qualified for the NHC, so she was playing for Tour Points only. That meant that the coveted seventh NHC berth fell to our eighth-place finisher Mark Aylward. All of us at HorseTourneys appreciate your support of our NHC qualifiers all year long. We look forward to what promises be an exciting 2017.

Our $7,500 guaranteed tourney on Sunday was an interesting event. 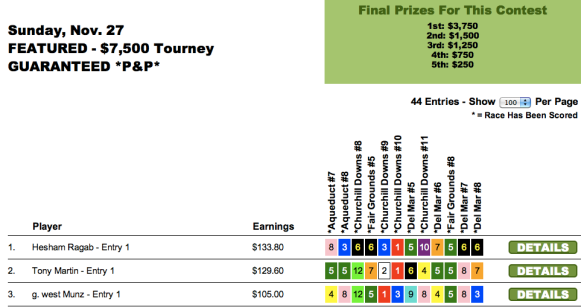 Sunday was our first of several direct qualifiers for the three, single-day Surfside tournaments to be held Dec. 30 – Jan. 1. 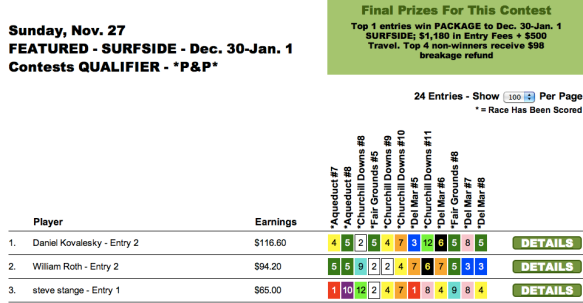 Initial honors go to Dan Kovalesky ($116.60 on five winners). He receives $1,180 in combined Surfside entry fees plus $500. Look for more of these tourneys on upcoming Sundays.

That left his competitors in our $1,500 guaranteed exacta box game on their knees and begging for mercy. His final score more than doubled that of his nearest competitor.

A couple of early heads-ups (?) for later in the week:

This Sunday will be our first qualifier for the NHC Last Chance Tourney at Treasure Island on January 26. We’ll, of course, have low-cost feeders leading up to the Sunday qualifier. Look for a free contest Wednesday offering a place or two into our Thursday feeder.

And our Wednesday night featured cash game is about to get bigger and better. Plans call for these games to have an enriched, $2,500 prize pool. Be sure to join us.

We hope that you and your loved ones had an enjoyable Thanksgiving Day and weekend. And that your week ahead is a fine one.