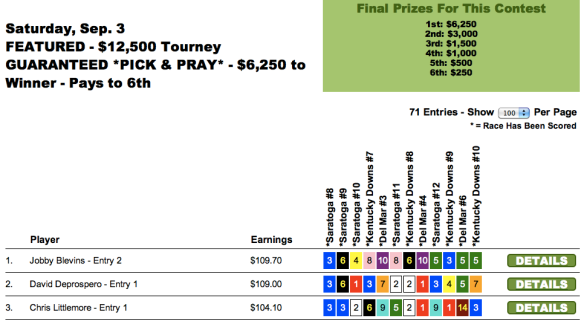 Our feature event on Saturday, September 3 saw Jobby Blevins get absolutely nothing from his last five plays. Yet a hot start secured him the victory (worth $6,250) in our $12,500 Guaranteed game. Tim Downs’s key to success in our $1,500 Guaranteed exacta box game was the big hit. His $1 exacta payoff of $176.40 in the 9th at Kentucky Downs did the preponderance of the damage in his victory, which earned him $600. 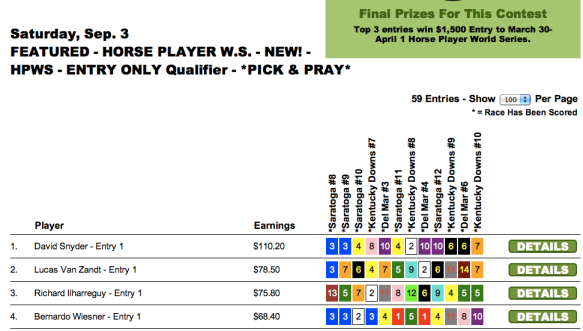 And our Saturday Horse Player World Series entry game — won by David Snyder, Lucas Van Zandt and Richard Ilharreguy — was won in two distinctly different ways. Snyder and Van Zandt followed the typical custom of the day…which was to use cap horse Silver Ride in Saratoga’s 8th race (the first race of the tourney). Ilharreguy missed Silver Ride but was able to chip away at that setback with a wide array of other lower-priced winners. It shows yet again that all is not lost when a longshot wins in a contest and you don’t have it.

Our Sunday featured event saw Bill Wilbur, Richard Grose and Dave Durkin become the latest to “Get Qualified” to the NHC. Grose, some may recall, flirted with NHC glory in January 2013 when he led after Day 1 (back when it was still just a two-day championship). The Wentzville, Mo., native ultimately wound up 4th in the big dance.

David Sullivan was the big winner in Sunday’s $7,500 Guaranteed game — a triumph worth $3,750. In our Orleans Fall Classic competition, Joe Jarvie and Steven Meier were the clearcut winners, posting scores a good $30 above the rest of the field.

On Monday, a big day for Pick & Prays, Sean Nolan demonstrated the power of multi-tabling. 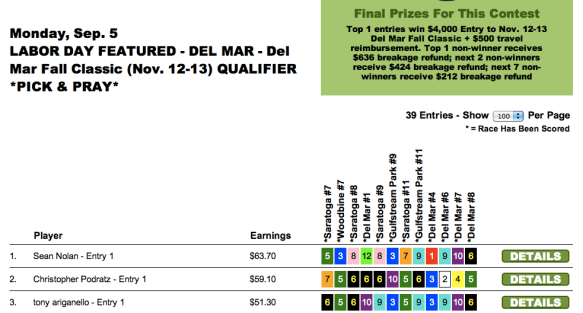 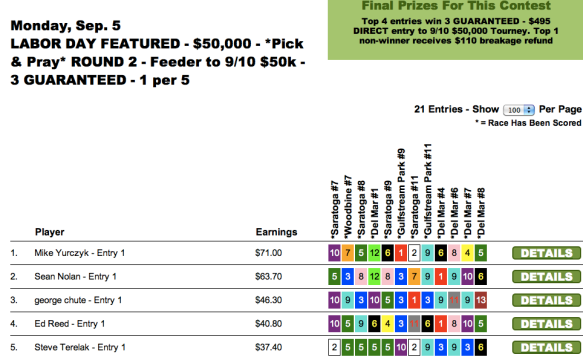 He was able to use the same set of good selections to win our Del Mar Fall Classic qualifier and also win a seat (along with Mike Yurczyk, George Chute and Ed Reed) to next Saturday’s $50,000 Guaranteed tourney. The $50,000 feeder was an oddly low scoring affair with Chute and Reed finishing “in the money” despite registering scores of less than $48 — a less-than-flat-bet-profit result). As they say in baseball, those bloopers that fall in make up for the line drives that get caught.

Paul Kimes and Jason Hill were our latest two qualifiers to The BIG One. Be aware that only four online seats remain available to the Sept. 24-25 event at Laurel. Your next chance to win comes on Sunday. 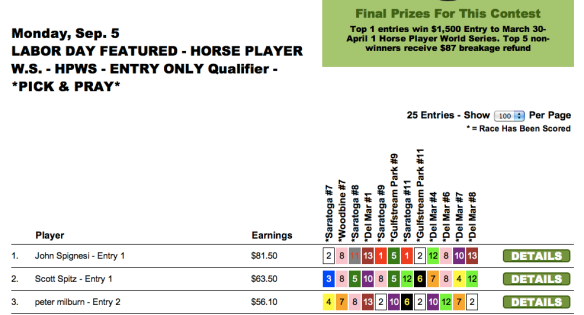 Once again, HorseTourneys players demonstrate that there are many different ways to skin a cat. Whether you are playing in our $50,000 Guaranteed game, our penultimate The BIG One qualifier, our one-time-only Woodbine Mile qualifier or one of the many other top games on this week’s slate, we wish you good luck and a good week.