Some people may remember this past weekend for Songbird and California Chrome. And, sure, those two were fine, I guess. But we HorseTourneys players are more likely to remember it for the truly exciting horses…like John Jones and Souper Knight and Camp Creek…the kind of longshots so essential to a successful tournament weekend! 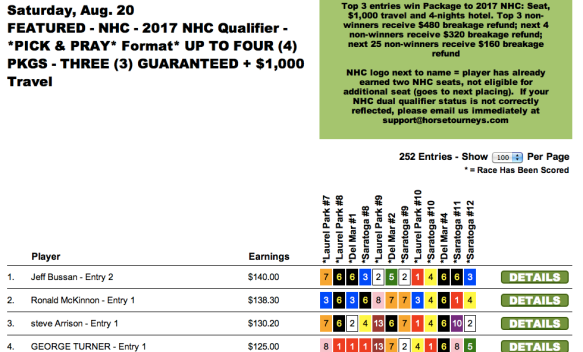 John Jones (above at Laurel winning a stakes first off the claim) and Souper Knight (Del Mar) were the stars on Saturday. And they helped make stars out of several HorseTourneys competitors. Jeff Bussan, Ronald McKinnon and Steve Arrison missed on John Jones but they all had Souper Knight, and that was enought to propel them to full NHC packages in Saturday’s big qualifier.

The top two finishers — Scott Coles and Jamaal Barnett — in Saturday’s $25,000 Guaranteed game had both John Jones and Souper Knight, but Scott’s smaller pickups were the difference, and he took home the $12,500 first prize.

Souper Knight was key (along with 6-1 Saratoga 10th race winner Orino) for James Michelson, who took the $6,250 first-place share in our $12,500 Guaranteed game.

In our hotly contested Orleans Fall Classic qualifier, there was no single formula for success. In the end, it was Mark McGuire, William Sullivan, Lisa Cipriano, Steve Stange and James Nace who walked away with full packages. 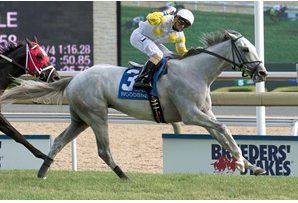 Out of 40 contestants in our The BIG One Pick & Pray qualifier, only winner Sean Nolan had Camp Creek. Nolan and runnerup Jill Himes — who tabbed six winners at prices ranging from $4.40 to $31.20 — will both be at Laurel on Sept. 24-25 for The BIG One. Only eight online spots remain, so be sure to play with us again next Sunday. 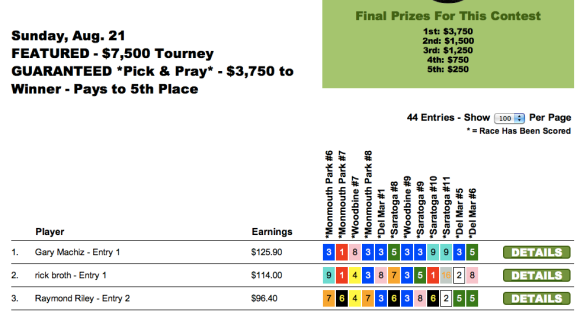 Camp Creek was less of a mystery to players in our $7,500 Guaranteed game. Gary Machiz and each of the next three finishers nailed the Woodbine longshot. Machiz won $3,750 for his Sunday efforts.

In our $1,500 Guaranteed Exacta Box game, winner Stephen McNatton totally whiffed on Camp Creek. But these exacta box games are a different animal, and here it was McNatton’s $83.50 exacta (for $1) on the first contest race (MTH R6) that did the major damage en route to his victory, which was worth $600. 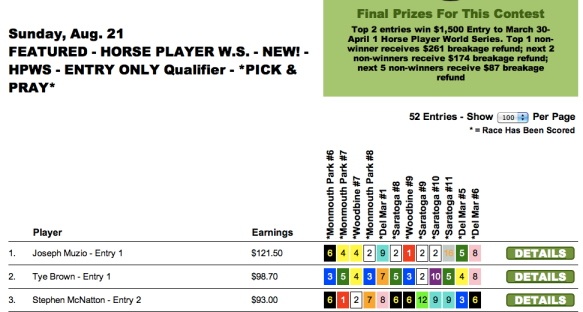 In our Horse Player World Series entry-only qualifier, Joseph Muzio eschewed Camp Creek but racked up six winners at prices ranging from $6.60 to $31.20 to take one package. Tye Brown won the other package. He was the only player out of 52 to pick Camp Creek, and he added a couple of other 4-1 winners to his mix just for good measure. Honorable mention also to 3rd-place finisher Stephen McNatton. Some say it’s not easy to do well in both a conventional win-place game and an exacta box tourney on the same day, but Stephen did just that.

Good luck to you this week in your upcoming contest endeavors. As the rest of the sport obsesses over the Travers, may you scope out that cap horse that makes the week truly memorable!