It was business as usual this past weekend…which, at HorseTourneys, means a lot of big money and lucrative tournament packages were awarded. 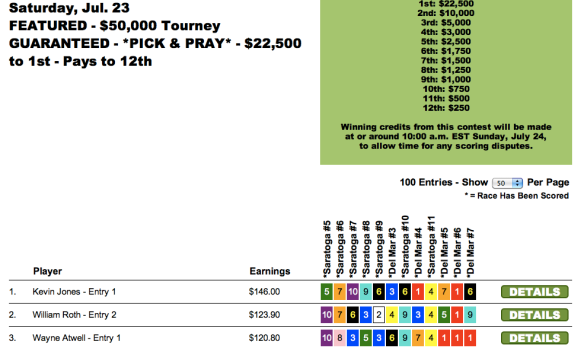 Our richest tournament took place on Saturday when Kevin Jones rode a strong second half of the contest to victory in our $50,000 guaranteed event, which was worth $22,500 to Kevin. The event drew an even 100 players (at $495 each), meaning that it was a positive-expectation tourney for all players. Our $2,000 guaranteed exacta box tournament that same day also wound up as a positive-expectation game and Ruben Lopez reaped the rewards, nailing the last two contest races at Del Mar to bring home $750.

Elsewhere on Saturday, renowned contest player Rich Nilsen tabbed a 7-1 winner in the final event at Del Mar to leapfrog G.T. Nixon and grab a full package to the August 13 tournament at Monmouth Park. Fortunately for Nixon, the tourney awarded two full packages to Monmouth, so he too will represent HorseTourneys at the Jersey Shore.

We also gave out one package on Saturday to the Gold Coast Classic and the much-the-best winner was Benjamin Coppola, who posted a whopping score of $205.90, which would have been good enough to win pretty much any tournament that day. An “atta boy” or a “hang with ’em” or whatever your favorite consolation phrase is should go out to runner-up Lindsay Hurst who posted a very strong score of $165.00 — more than $65 higher than the third-place finisher. (Shades of Henrik Stenson and Phil Mickelson, perhaps.)

Sunday saw Brian Gross and Sean O’Malley each earn full packages to September’s The BIG One at Laurel. Gross was the controlling speed early and O’Malley came charging home late to finish atop the field of 35. Keep an eye out for these The BIG One qualifiers each week. A player’s chance for success is pretty high in these.

Sunday was also our Wynn Blowout day, and it is my happy duty to report that no fewer than nine HorseTourneys players won entries to the popular August 5-6 event. If you still haven’t won a spot for the Wynn Handicapping Challenge, be sure to play in our last chance qualifier this Saturday for just $116 (with feeders running in to it all week long).

Our $7,500 guaranteed game yesterday went to William Roth who, along with the next two finishers, each had 7-1 Patriots Rule in the last race of the contest. Finishing fourth was Ed Peters, who nearly won his third Sunday cash game of the month here at HorseTourneys. One more July chance for Ed this Sunday!

Roth used his exact same picks yesterday to also take home a full, two-day package to The Battle of Saratoga on August 10-11. He will be accompanied by fellow winners Brian Costello (1st), Joseph Labounty (3rd) and James Timinck (4th). They join 12 earlier HorseTourneys qualifiers to Saratoga and we’ll be adding to that total this week and next for sure.

We were proud yesterday to send what we believe are the first three qualifiers ever to the first Indiana Grand NHC qualifier ever. As a result, Ryan Leeper, Paul Kloeker and Phil Cleek will all be in the Hoosier State with two entries each as they compete for the three available NHC seats on August 20. There’ll be more chances to qualify this week and in the weeks ahead. 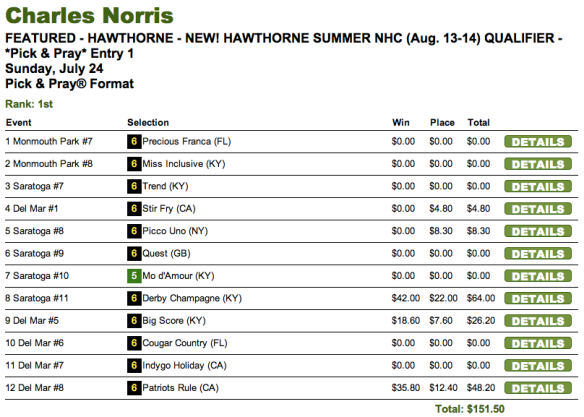 Last but not least, in the category of “Pretty is as pretty does”, congratulations to our Hawthorne package winner Charles Norris, who used the 6 horse in every race of his Pick & Pray, except of course in the Coaching Club American Oaks which only had five horses.

Charles’s prayers were definitely answered yesterday, and we hope yours are in the week ahead. Good luck!